It worked... until I woke up — midflight

I’m not a traveling salesman, criss-crossing the country. I don’t work in the clothing industry, going back-and-forth to my sweatshops in Asia. And I don’t have family on the East Coast who require my presence once a month. That is to say, I’m rarely going someplace where I need to sleep on a plane. Few red-eyes. Even fewer long-haul flights, relatively luxurious as they may be. Basically, if I’m flying, I’m flying an hour to San Francisco, the kind of flight where you don’t have time to finish a crossword puzzle let alone catch a few z’s.

But, on occasion, I do travel, you know, for real. A couple of summers ago, for instance, I was lucky enough to be invited to a close friend’s wedding in Mallorca, Spain. That was definitely real travel. And a few years before that, my brother lived in London, and those trips required some shut-eye while at 35,000 feet.

The problem is, when shut-eye is required, I’m usually very bad at it. Like, it gives me anxiety, the idea that, on a flight, I have to sleep, lest I arrive and sleepwalk through my entire vacation. So, naturally, I go way overboard: Sleeping pills or painkillers (don’t judge me), and a couple glasses of wine, if and when readily available. I force myself to sleep, in other words, because — and I’m sure you’ve never noticed this — but planes aren’t exactly conducive to it: They’re either too hot or too cold; the seats are impossibly close together; the seat cushions have most likely been peed on; and if you do drift off into dreamland, your head is entirely unsupported. Which is why you see those sleepy bois hunched over their tray tables like they’re possessed.

On the aforementioned flight to Spain, I bought one of those donut neck pillows in an anxious fit at the airport, scared that if I fell asleep, I might try to make a headrest out of my seat mate, and if I couldn’t sleep, I’d end up roaming coach (erm, excuse me, economy) like a zombie. I think the pillow was $30, which I kicked myself for not buying on Amazon for a third of the price, especially because it didn’t work for shit. Memo to anyone thinking about buying one of these things: It’s not even remotely comfortable; the way the donut sticks out behind your neck means that you’ll never be able to lay your head comfortably against the seat — instead, it’ll flop around like it’s on a gyro. Nothing like starting your vacay with a stiff neck!

So when my girlfriend and I took a trip recently on a red-eye to New York to see friends, I needed something that would A) be supportive and B) actually make trying to sleep in a cramped-ass seat comfortable.

Which is how I found out about the biggest thing in sleeping on planes since Ambien: The Trtl.

The Problem: I can’t sleep on planes, dammit.

The Alleged Cure-All: Yes, it’s called the Trtl. Yes, that’s a very bad name. But I think we can all separate the product from its arguably terrible branding. I mean, we almost called this website The Schvitz (or was it The Shvitz?), for christ’s sake, but it still would’ve been awesome, right?

Despite what the site says, the Trtl isn’t a neck pillow, per se. Nope, it’s more like a scarf with a built-in, rigid structure — some might call it a cradle — wrapped in soft fleece, and meant to rest on your shoulder, chest or back while supporting your head. The fleece that doesn’t cover the cradle — which is a lot — wraps around your neck, not to strangle you, but to lock your head into place against the support. It all sounds a bit mental institution-y, but when you see it in action, it makes sense:

The ergonomics of the Trtl aren’t all that it’s got going for it either. First off, it’s light — like the weight of a baseball hat. Second, it folds into a relatively small footprint, meaning you can comfortably store it in your bag without bulking it up.

Honestly, it seems like the people behind the Trtl actually looked at the way we sleep in a moving vehicle, and thought up a solution, as opposed to just pushing out a crap product like the donut-pillow people. I gotta give them some credit.

The Cost of No Post-Flight Neck Pain: Priceless

The Science: So the Trtl folks say that their product is “scientifically proven.” It’s all over their website. In the FAQs, they explain that the Trtl was tested “in a simulated aircraft seating environment,” which proved “that it keeps your head in a better position for sleeping upright” for “9/10” users. That all sounds pretty scientific to me.

But honestly, this isn’t near-infrared therapy — I’m not sure the science really matters all that much when it comes to travel pillows, only that it’s comfortable to use for long periods of time, which, if going off of chatter on the internet, sounds like this thing is.

The Experience: Before boarding our midnight flight, my girlfriend and I split half an Ambien, because as you learned, I don’t take any chances. By the time we arrive in our seats prior to take off, we’re both getting a bit wobbly. Now keep in mind, I ordered my Trtl maybe 72 hours before my flight, which means it didn’t arrive until the last minute. And so, when I got it in the mail, I didn’t really take it for a spin — I simply removed it from the packaging and placed it directly in my bag.

Before I move on, allow me a brief interlude to reiterate that the Trtl is pretty damn convenient — as I mentioned earlier, this thing folds down to basically nothing, a welcome respite from the donut I had previously, which I used to embarrassingly snap on the outside of my carry-on because I could never fit it in my bag. Walking around the airport with a leopard-print pillow doesn’t do much for your street cred, let me tell ya.

Now, back to the story at hand. Like I said, upon receiving the Trtl so soon before the flight, I didn’t even have time to try it out, so I just kinda stuffed it into my bag and went to the airport. This turned out to be a rash decision, because the first few minutes after sitting down in our seats were spent hastily figuring out how the thing worked in a Ambien-addled stupor.

Admittedly, it’s not like the Trtl is hard to figure out — you position the cradle, and then wrap the scarf portion around your neck and fasten with velcro. But it does take a few tries to master the art of getting it to stay put without it being so loose it loses its support, or so tight you end up strangling yourself. 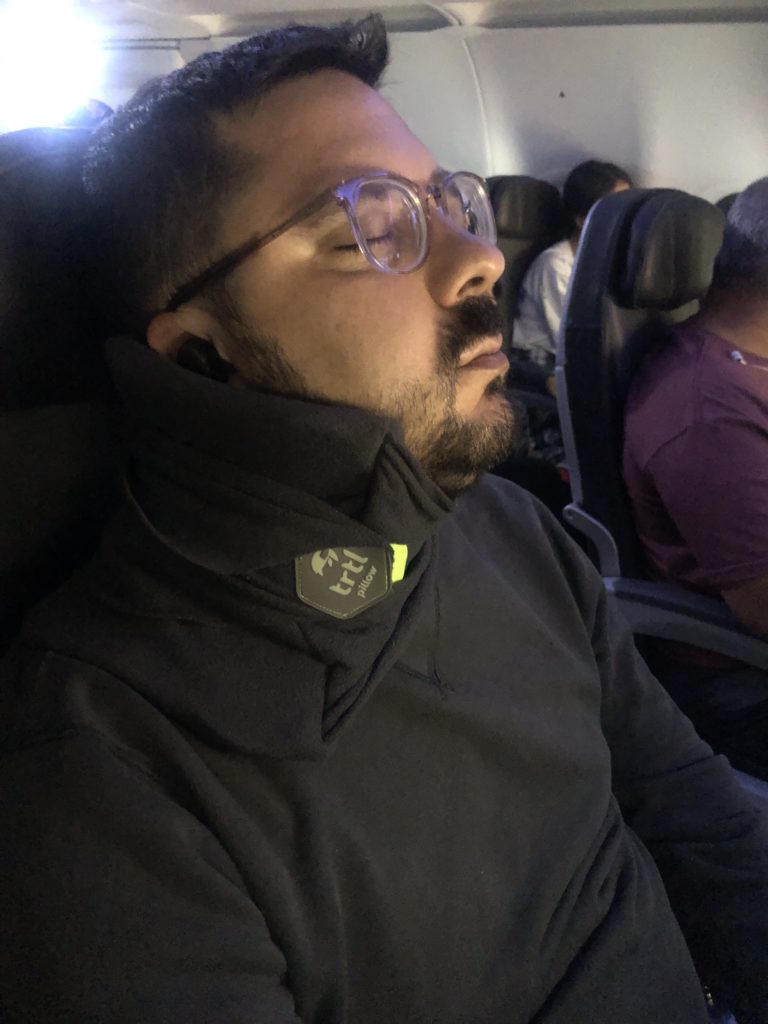 Once on correctly (I preferred to rock the cradle on the side, but you can position it front or back as well), I fell into a deep, immediate sleep.

About 90 minutes later, I’m wide fucking awake. I’m tired, mind you, but the Ambien had, at that point, worn off, and now I’m well-aware that what I’m attempting to do at that moment is sleep on a plane, and I don’t sleep on planes. My knees are cramped, my girlfriend is like an MMA fighter grappling for a comfortable nook to sleep in and my eyes are like a desert.

The bad news is, I never got back to sleep. The good news, of course, is that at least my head was comfortable, and my neck was warm. After some tossing and turning, I ended up admitting defeat and watching Good Will Hunting until we landed.

Revised Recommended Dose of Ambien: One pill. But I’m not a doctor, so don’t take my word for it.

The Result: I really like the Trtl pillow — it’s head-and-shoulders (pun intended, and honestly, kinda unavoidable) above the crappy products it’s replacing. My head was comfortable and secure the entire time I was wearing it. If you’re the kind of person who can fall fast asleep on an airplane, and more importantly, stay asleep, I can almost guarantee that you’ll wake up without any pain in your neck, no matter how bad the turbulence is.

If you’re the kind of person who can sometimes sleep on a plane, but just needs to find that perfect sleeping position first, the Trtl will take out all of the guesswork — no repositioning required.

But for people like me, who either need to be dosed up or drunk to sleep comfortably on a plane, while the Trtl will keep you otherwise comfortable, it won’t necessarily put you to sleep, or keep you down once you’re out.

Only pharmacology can do that.