I Just Found Out I’m Going to Be a Dad. So I Joined a Boot Camp for New Fathers.

That “holy shit” moment came for me on May 1st, when my girlfriend ran down the stairs of our house to announce news that, considering I’d only recently come around to the idea of having kids at all, I never really expected to hear. But there it was. At 36 years old, we’d decided that this was the year to do it. Even so, we’d only been giving it the ol’ college try for a few weeks, so this news was still pretty unexpected.

I, of course, was immediately filled with the proverbial mix of joy and terror.

But as unready as I felt/feel, I also figured I had nine months to prepare myself mentally, physically and spiritually for what will obviously be a lifelong marathon. To that end, Ari, my pregnant girlfriend, immediately downloaded The Bump, a pregnancy-companion app (and website) recommended by her OB (and countless friends), which does things like tell you how big your baby is on any given day (today, for example, our baby is as big as a playing card). There are also tons of classes couples can take together, classic ones like Lamaze, and others on everything from breastfeeding to baby massage.

The Problem: I’m gonna be a dad — and I haven’t the slightest idea what I’m doing.

The Potential Solution: Boot Camp for New Dads, a $35, nine-to-noon-on-a-Saturday Zoom class (that was definitely in-person pre-quarantine — thanks, COVID) for soon-to-be fathers, led by an instructor and a number of actual fathers (nicknamed “vets”), designed to answer any and all questions related to how to be a first-time dad.

According to its website, the boot camp was started in 1990 by a group of new dads to “‘show the ropes’ to men with their first child on the way”:

“We ‘veterans’ talked about our experiences and offered advice, and we all got to know and trust each other. Everything said in the room stayed in the room, so nothing was left off the table. The rookies were relieved to find their many concerns and even fears were common among dads-to-be. By the end, each man came to realize, ‘I can do this,’ and went home with a new sense of confidence. And they did do it, and months later returned as veterans with their own babies to pass on knowledge to the next group of dads-to-be.”

Thanks to the pandemic, however, some of the boot camp’s bells and whistles went out the window. In the virtual class, for example, there’s no longer any hands-on experiences like putting diapers on life-like baby dolls, or learning how to hold any real babies that the vets have brought in, which gives a lot of it a classroom lecture-type feel. 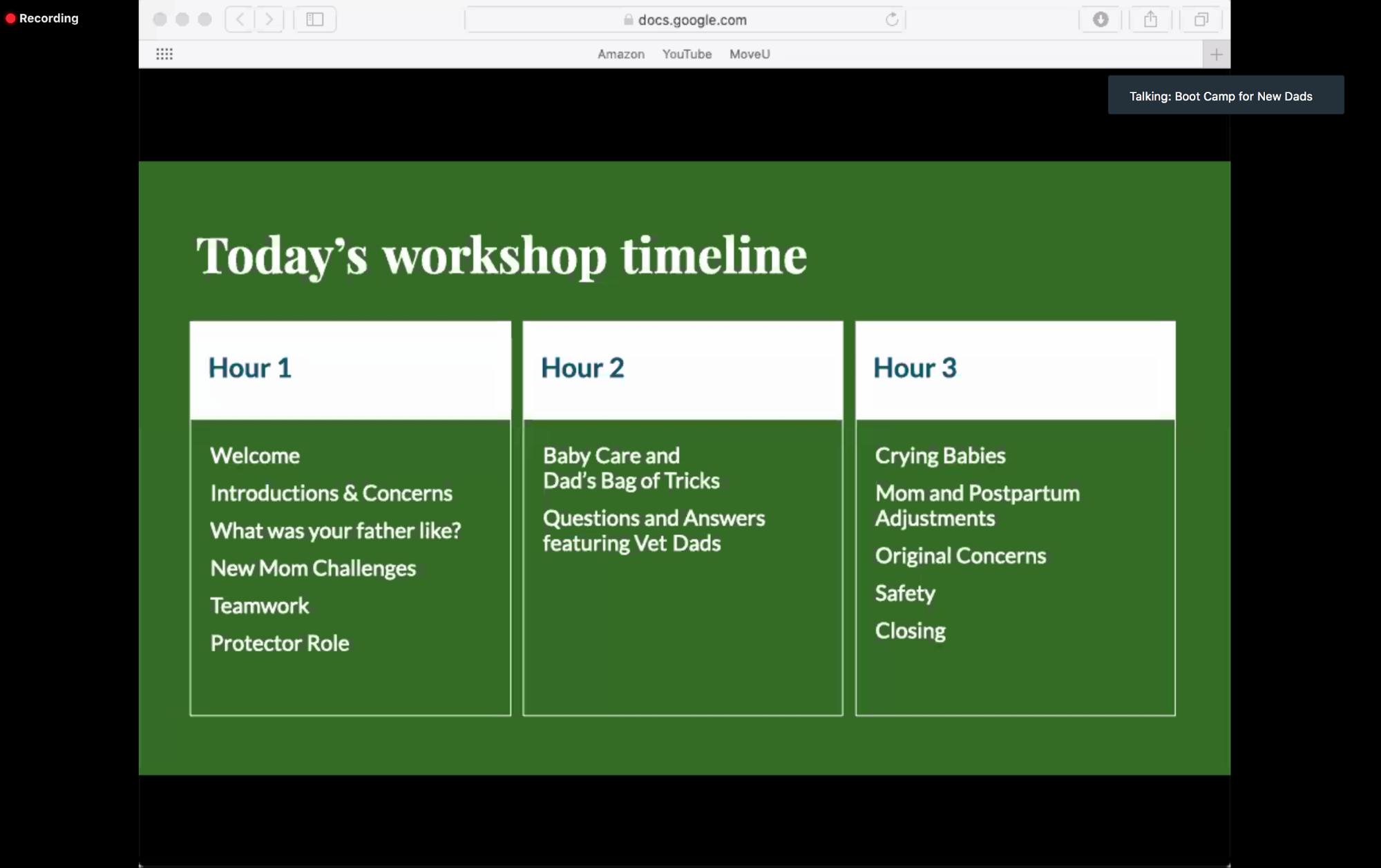 The Experience: The meat-and-potatoes of this three-hour boot camp was in Hour Two, when the instructor split us up into breakout groups (you can do that with Zoom, surprisingly) for a round-robin Q&A with the vets.

The first hour had gone by rather uneventfully, the instructor doing less instructing on how to handle the experience of the delivery and our kids’ early days, and more explaining the idea that we might learn, at some point over the next three hours, what we’re going to experience. 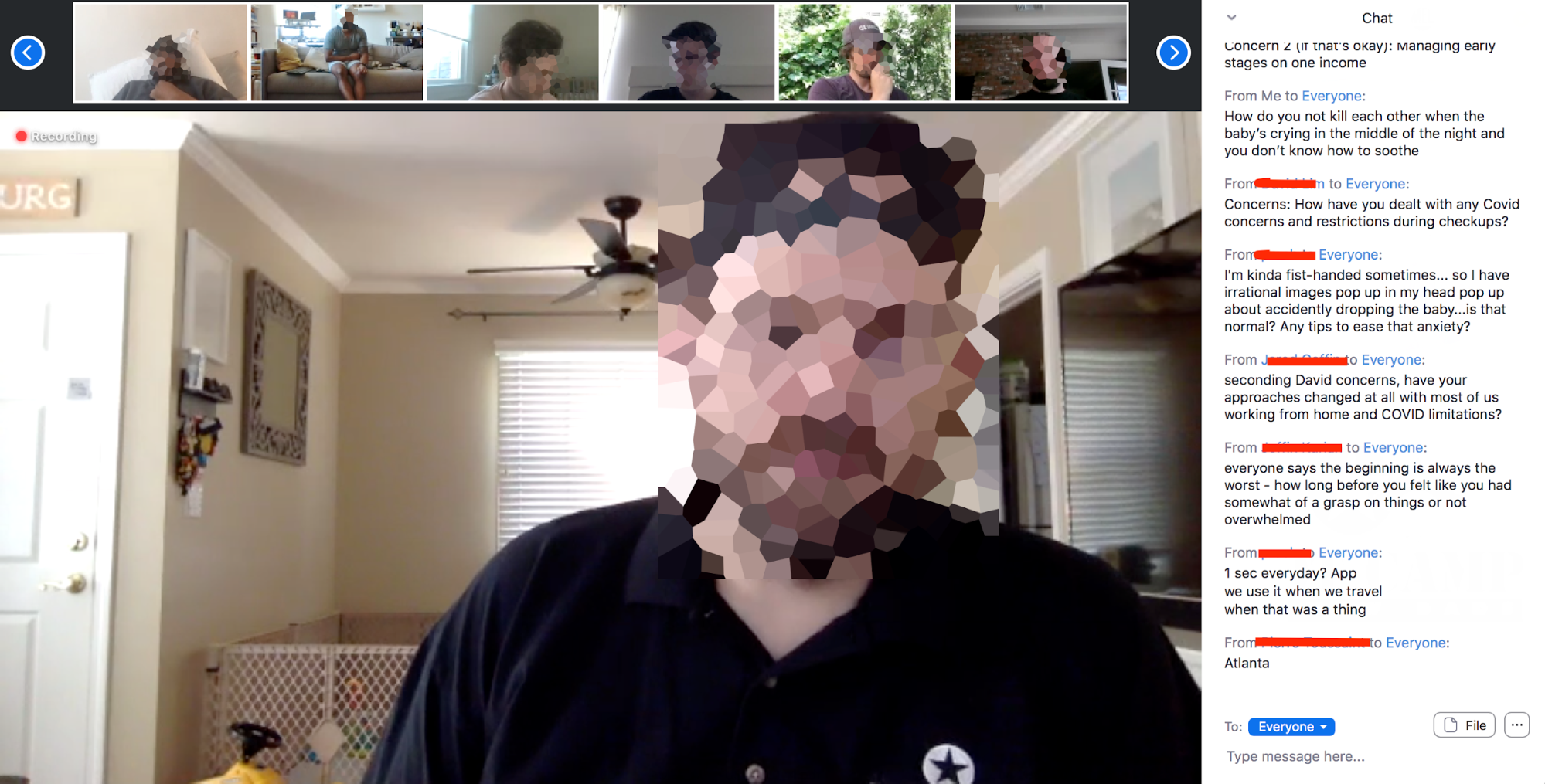 With five or six guys to a breakout group, Hour Two was a chance to ask questions, and get them answered. I asked the questions I’d written down: What to expect in the first 72 hours (2-to-3 hours of sleep per night, a lot of stress); strategies for getting more sleep (“take four-hour shifts at night so one parent can sleep while the other is on call”); and how to not kill each other trying to get the baby to stop crying (a very real phenomenon, I was told, where parents feel guilty they can’t soothe their child).

Strangely, though, only one other dad in my group was asking questions. Maybe it was the fact that our first vet dad in the round robin was taking our questions from his car that put the group in an apathetic state. But more likely, it was a byproduct of the Zoom experience — in a real-life room, in a class you paid money to be a part of and where you have to both physically and intellectually interact, there’s no place to hide. On the Zoom call, however, half the dads in my group didn’t even have their cameras on.

When the few questions were answered, our vet dads were forced to fill the dead air with stories of their own experience. A couple hammered home the idea that most of what you want to happen goes sideways the moment something goes wrong, like waiting too long to get the epidural you put in the baby plan (happened to one vet’s wife), or when your water breaks and your OB is on vacation (another true, if kinda cliché, story). They also shared a detailed explanation about what it was like to watch a C-section and that you can fire your nurses if you don’t like them.

So there was information being transferred, for sure. But I couldn’t shake the feeling I was being talked to, as opposed to being talked with. It all felt strangely impersonal.

Best New Dad Zoom Set-Up: Among the fun things (for me at least) about hopping on a Zoom call with a bunch of perfect strangers is checking out peoples’ video setups, and trying to guess what their lives are like. One dad, for instance, was lying down on his back, in the dark; another had a virtual background of a tropical beach that the instructor thought was so real he stopped the dad mid-sentence to ask about it (in the instructor’s defense, it did look real). But the best setup, the one that held my attention enough that I pinned his screen to mine so I could watch him, was a guy in full hunting camo who looked like he was sitting in a duck blind. For his privacy, I won’t include a screenshot I took, but here’s an unlicensed Shutterstock re-creation (just imagine wood paneling, as opposed to the Matrix, behind him): 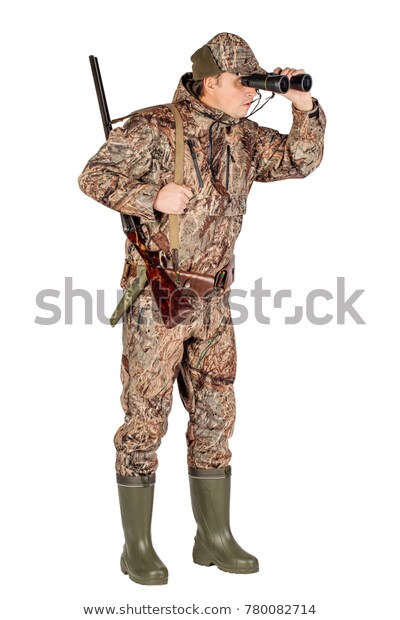 Steve, wherever you are, I hope you felt your question about C-sections was answered with a level of detail to your liking.

On Falling Victim to One of Life’s Classic Blunders: If there was any really powerful take-home, it’s that, “Everybody has a plan until they get punched in the mouth.” From what the vets told me, any such pre-planning — from what the delivery is going to be like to pretending as though Ari and I won’t want to kill each other by Night Three — pretty much goes out the window the moment labor begins, and to believe otherwise is just an exercise in delusion. 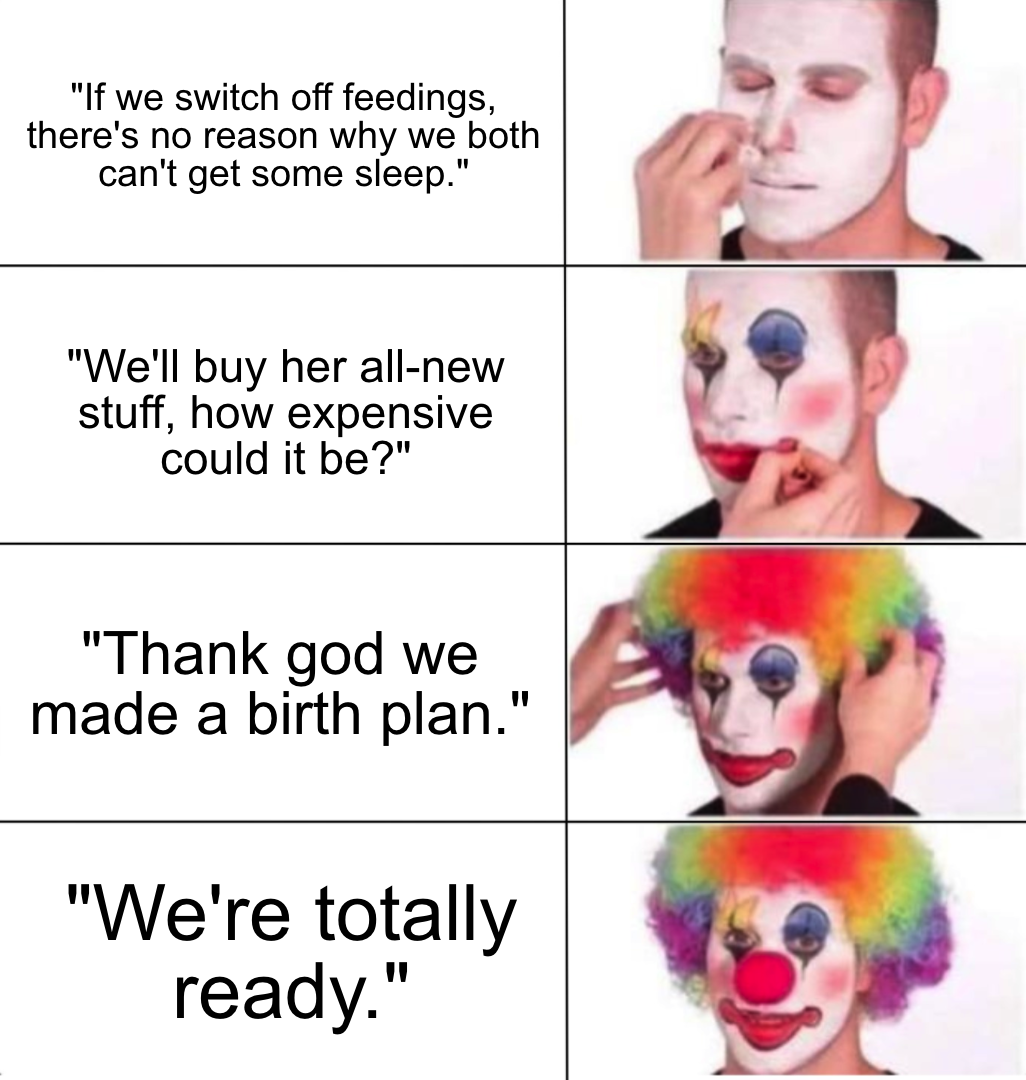 The Result: I learned some things over the three hours, but not so much that I feel what anyone would describe as “prepared.” Overall, the experience was indicative of just how limiting trying to do something like this over a video conference is. These dads’ experiences were powerful, the questions and answers were somewhat insightful and the instruction we did get was helpful, but it really needed to be in-person to truly work — for the same reason that when you want to teach kids marine biology, you take them to a tide pool for the hands-on experience.

In a non-pandemic year, I might’ve walked away with instructions on how to change a diaper, or to know what to do when it’s been five hours and the baby won’t stop crying, or the methods to properly mix formula firmly entrenched in my brain. But instead, while I was given those instructions, they feel like they were translated into a foreign language and back into English.

I guess there’s solace in the one thing that did lodge itself in my memory: Even the best-laid plans are likely to go off the rails anyway.