My head is pounding rhythmically like the bass drum of the band I’d been out to see 12 hours earlier. A night spent consuming countless cocktails and some late-night carnitas tacos will do that, especially when you’re pushing 35. It’s certainly not the peaceful headspace I had in mind when I imagined coming back into the Roxbury Institute in Beverly Hills for my latest doctor’s appointment there.

The Roxbury Institute is easily the nicest medical office I’ve ever stepped foot in, with its white marble floors, modern furniture and fixtures straight out of a West Elm catalog. You know, the kind of medical office where celebrities might get a tummy tuck or 400 ccs of silicone, and when you ask if there’s a co-pay, the young, pretty receptionist looks at you like, “What’s a co-pay?”

This is my third, and thankfully, final visit to the Roxbury. I’ve returned this time with Sam Dworkin, MEL’s senior designer, who’s there to document that which had become semi-routine at this point: The insertion of an Obalon balloon, which the Obalon website hails as “the FIRST and ONLY swallowable, FDA-approved balloon system for weight loss.” Only, this visit is anything but routine, considering I’ve turned a shade of green, and I’m one shake of a lamb’s tail away from puking all over the nurse’s black clogs.

I’d first heard of Obalon via an inbound email from their PR agency a few months earlier. They’d read a piece MEL had done on “dad bods” and were kicking the tires on whether we’d want to write a puff piece on Obalon and interview some guys who had tried it, and, of course, seen amazing results. Seeing an opportunity for some stunt journalism, I emailed our editor-in-chief and proposed a different angle: Let’s see if they’ll let me get my own set of balloons, and then write about my experience.

In the 15-plus years since I quit playing collegiate water polo — and subsequently began constructing a considerable midriff as I continued eating like I was still burning thousands of calories each day — I’ve looked for a silver bullet that might return me to my 180-pound fighting weight from the 220 pounds I began carrying. My first go at cheating my way to thinness was possibly the stupidest: Hydroxycut, a weight-loss supplement, which at the time I was taking it back in 2004, still listed ephedra as an ingredient — the side effects of which include irregular heartbeat, seizures, heart attack, stroke and death. Hilariously, I stopped taking the stuff not because it made me feel woozy, but in true “me” fashion, because I had no interest in keeping up with the crazy pill-popping schedule recommended for best results.

Since that initial stumble, it was one fad after the next. There was, for example, the time my roommate convinced me to try Paleo for a month (the daily consumption of “turkey-avocado surprise” got a little boring); the time I spent $120 on a single, one-on-one CrossFit session (my surgically repaired knee was my “get-out-of-jail-free” card); and the time I tried intermittent fasting (no food over a 24-hour period made Jeffy a dull boy). Whatever it was, as long as it didn’t strike me as an out-and-out scam, I wanted to try it. I also was sure to eventually fail at it.

Which brings us to the present day, and the Obalon balloon weight-loss system. Here was an offer to try an expensive (so you know it’s good), non-invasive procedure that could, possibly, lead to 15- to 30-pounds of weight loss over six months with minimal effort on my end, and they wanted to give it to me for free.

Sadly for me, however, there was some effort required. Obalon only really works, I’d find out later once I was in the same room as one of their reps, if you meet it halfway. That meant changing some deep-seated behaviors, behaviors I’d grown to cherish — like weekly Chinese takeout, and the occasional bender. Basically a healthier diet, coupled with the fact that I’d be eating less once I had three orange-sized balloons in my stomach, was the key to the whole thing.

After some thoughtful meditation on who I’d let in on my secret weight-loss journey, I told my girlfriend at the time. She immediately laughed, asked why I didn’t “go to the gym and eat healthier, like everybody else,” and in a turn of phrase I’d grow to love, began referring to the balloons I was set to get inserted as my “boobs.” My coworkers were the same, posing lots of questions like, “Isn’t this dangerous?” And: “What the fuck is wrong with you that you’d want to spend the next six months with those things in your stomach?”

All good questions, yet nevertheless, questions I could and would brush off, because I was going to do this, dammit, and cheat my way to a better, thinner me.

Sam is laughing at me. I’m pretty sure, though, it’s his way of expressing empathy, I think, because he knows how hungover I am, and also, what’s about to happen. I’m standing in the X-ray imaging room at the Roxbury, a claustrophobic space down the hall from the gleaming lobby, where I’m waiting for the Obalon rep to come in with the “pill” I’ve come to loathe. 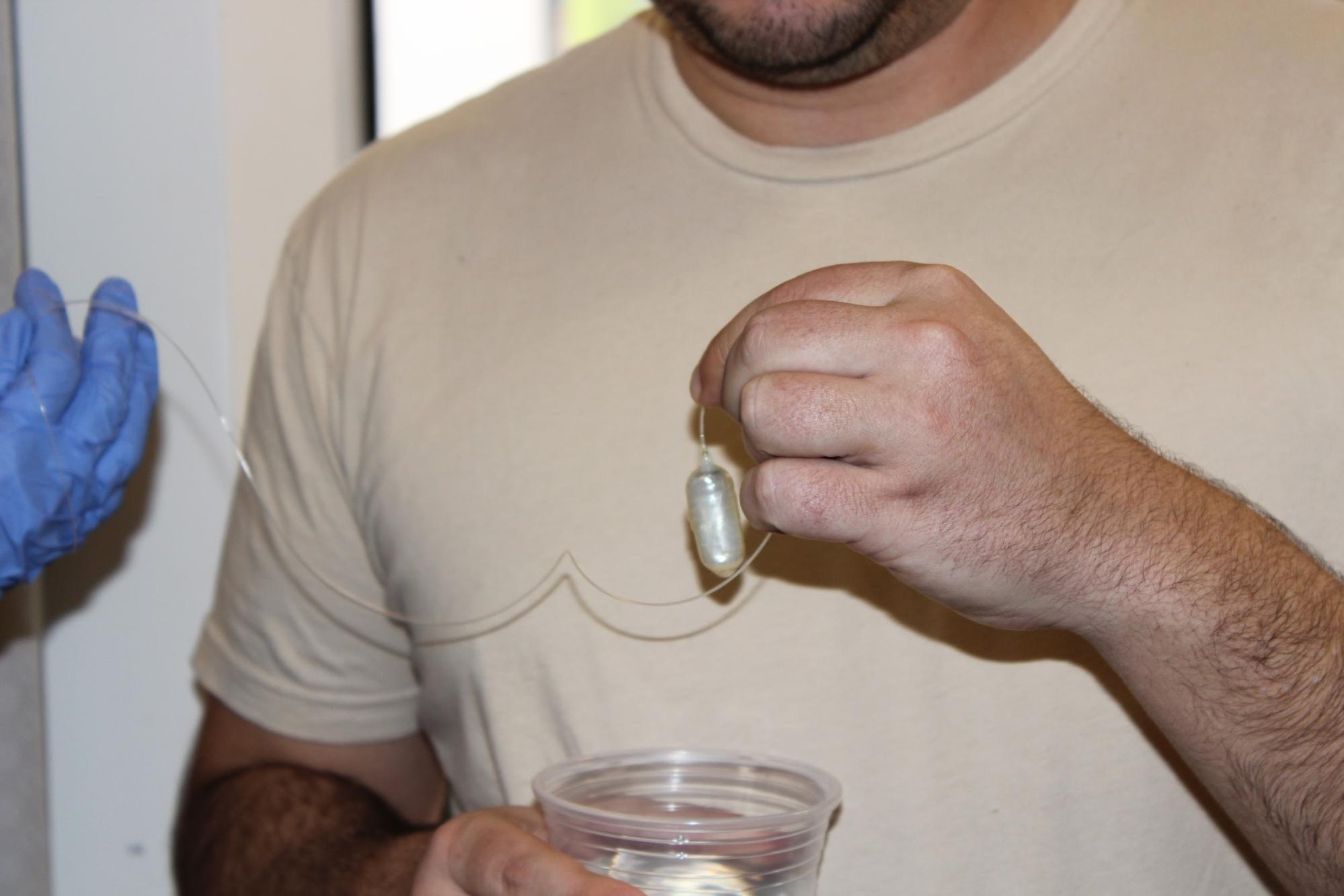 It’s a gagger’s nightmare. About the size of the tip of your thumb, and fitted with what can only be described as fishing line, I’m supposed to put this thing in my mouth, swallow it and then wait — line still attached — while the balloon inside emerges from the capsule and the nurse uses a gas to inflate it through the line to its final size.

Swallowing the balloon is one thing — you’re supposed to kinda lean your head forward, put the pill in the back of your mouth and then with a cup of water, choke the thing down one swig at a time — but it’s the feeling of that fishing line running the length of your esophagus that’ll get ya. My eyes are full-on watering at this point, and Sam’s light laughs have morphed into sympathetic dry heaves.

Eventually, though, I get it all the way down, and that’s when the real fun begins. The balloon being inflated while inside of you is an experience that recalls the sudden onset of feeling very full, but minus the satisfaction you get after a delicious meal. Early in the Obalon process you’re prescribed anti-nausea, anti-spasm and anti-acid medications, all of which you’ll need, because you’ll definitely feel them nestled inside of you every morning when you wake up, and any time you’ve got an empty stomach. 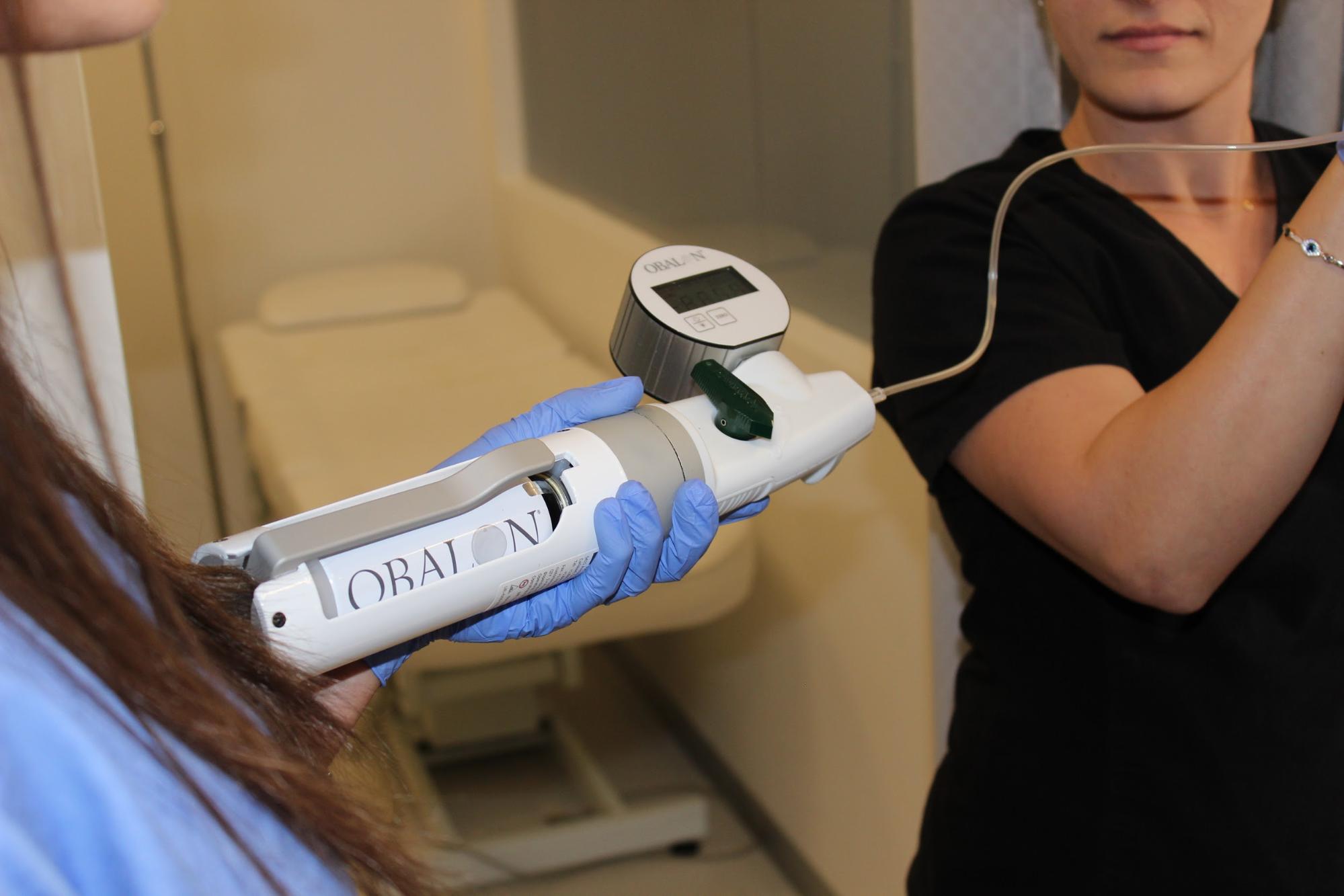 Honestly, it was all those early-morning empty stomachs that tripped me up. That dull, aching feeling of the three balloons rattling around my stomach was one I learned quickly could be subdued by, of course, eating. And though I was good about portions in the early days — lest I throw up, as I was warned — one night after a few drinks and a container of chicken tikka masala, I realized that the Obalon system’s promise that I’d eat less didn’t really apply to me. I, the iron-stomached human garbage disposal, could eat what I wanted, and as much as I wanted — no matter the balloons allegedly pushing against my appetite (and stomach). Plus, on top of it all, food made me feel better.

Six months after my first insertion, however, after being put under anesthesia and getting my “boobs” removed through my mouth by a gastroenterologist — so much for non-invasive — I finally weighed myself.

After all that, the giant pills, the pain and the snickers at home and around the office, I had lost just six pounds. Six measly pounds. A far cry from the 40 I’d dreamt of losing, or the 20 I would have gladly accepted. Six pounds is basically water weight. A good bowel movement. A couple days of keeping the human garbage disposal switch in the off position. My appetite and the will power it took to keep it in check had once again won out, the Obalon balloons befalling the same fate as Hydroxycut, Paleo, CrossFit and intermittent fasting. I couldn’t hack it because my love of food is apparently unbreakable, even when undergoing a medical procedure designed to keep it from sticking to my ribs.

They did result in one major breakthrough, though: I was able to quickly and easily determine that the issue was me, not the balloons. A painful price for more acute self-awareness, but a lesson worth learning nonetheless. If for no other reason than in the future it won’t take three balloons being inserted into my stomach to understand that I’m most likely the problem. (It hasn’t, however, deterred me from attempting to hack my shortcomings in the future — more on that in the coming weeks on this very website, where I’ll attempt to do so on a weekly basis; but it has convinced me not to take on my hunger or weight issues in such a manner anytime soon.)

As for everyone else — like say, yourself — would I recommend you try something like Obalon? That all depends. Can you swallow thumb-sized objects without blinking an eye? Are you prepared to feel bloated as shit every morning for six months? Do you think you can make serious changes to your diet and the amount of food you consume? Do you have 12 grand lying around to spend on a weight-loss system the success of which depends on answering “yes” to all the questions above?

And finally — and most importantly — do you promise not to be a corner-cutting lazy-bones like myself?

Then yeah, maybe give it a try.