From hot dogs nestled in a baked potato to fusion dogs that bring us the worst of both worlds, there’s a hot dog style out there that’s sure to offend everybody

There are numerous hot dog debates. Mustard or ketchup? Beef or pork? And the internet classic: Sandwich or not? I mean, obviously the answer is no. I’m not sure why I think this, but I feel adamant about it — and no, I don’t want to debate you, debate me guys! People also have strong opinions about what toppings should (or shouldn’t) go on a hot dog. Anything to make you forget you’re deep-throating pig anuses, I guess.

Now, I was very familiar with classic “next-level” toppings like chili, cheese, sauerkraut and slaw, but I recently came across a graphic of how people do their dogs around the world and was blown away by some of the regional faves in the U.S. alone, styles that range from demented to get that in my fucking piehole right now.

From hot dogs nestled in a baked potato to fusion dogs that bring us the worst of both worlds, there’s a hot dog style out there that’s sure to offend everybody. So before Summer 2019 is a distant White Claw-fueled memory — enjoy Labor Day weekend! — here’s a look at some of the more unusual regional hot dog combos that you may or may not want to add to your BBQ repertoire. 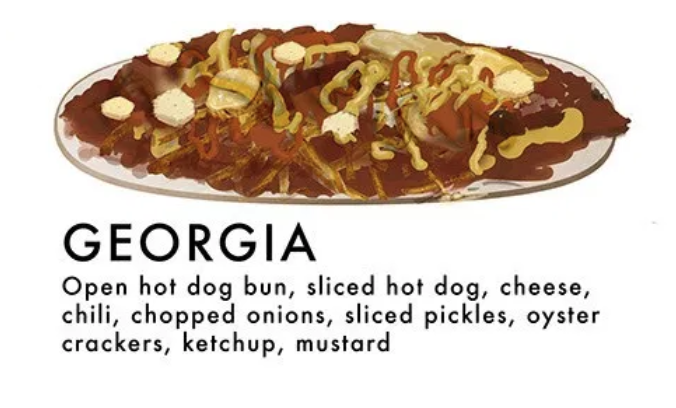 If you’re in Columbus, Georgia, you can hit up the Dinglewood Pharmacy, an old-school pharmacy/soda fountain and try its signature dish — the Scrambled Dog. The pharmacy has been around for more than a century, and they now sell over 600 Scrambled Dogs a week. So what is it? It’s basically a chili dog topped with jalapeños, sour cream and oyster crackers. Sounds exactly like the hangover fusion cuisine we all need after hours of day drinking.

The iconic Dodger Dog (served, of course, at Dodger Stadium) finally got a makeover in 2011, when the Doyer Dog was launched. Whereas the Dodger Dog is a foot-long American classic, the Doyer Dog gets a Mexican twist with chili, nacho cheese, chopped onions, tomatoes and pickled jalapeños. I’ll stick with the classic, but if I’m ever in Dodger Stadium’s infamous All-You-Can-Eat Right Field Pavilion, maybe I’ll give it a try after numerous beers, and just go all in on fucking up my stomach like a champ.

Chicago has a lot to answer for when it comes to their divisive deep dish pizza, but their hot dog seems equally controversial. This one is described as being “dragged through the garden,” a weird way to serve something as patently unnatural as a hot dog.

In fairness, it starts off pretty good, with a poppy seed bun, mustard, chopped onions, sweet pickle relish and pickled sport peppers, but things take a sharp turn for the worse with the addition of tomato wedges, whole dill pickle spears and celery salt. Technically I like all of these things, but if I want a salad, I’ll order a salad. If I’m eating a hot dog, I’m clearly a nihilist. 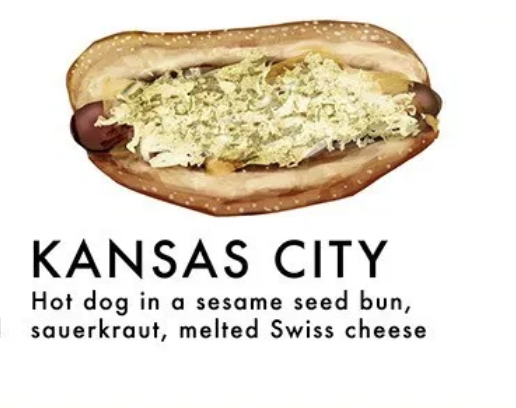 In KC, they serve their hot dogs in a sesame seed bun with sauerkraut and melted swiss, kind of like a poor man’s Reuben. I love Reubens, but I’m probably gonna be sad when there’s no pastrami. It seems as disappointing as when my mom made Hamburger Helper sans hamburger. WHAT WAS IT HELPING, MOM?

Maybe, though, it isn’t real? Because I couldn’t find an actual review of it. 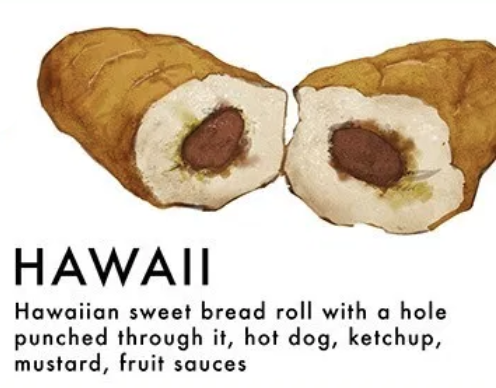 “No loose wieners” is being added to my potential memoir title list. 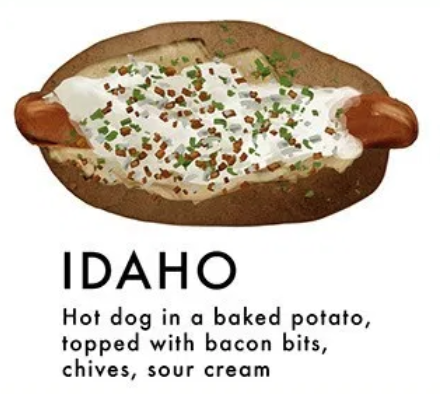 This wiener is served in a baked potato instead of a bun and then topped with chives, bacon bits and sour cream. I love hot dogs and I love baked potatoes with all the fixings, but these are two great tastes that I never want together. That said, I’m always looking for more ways to eat potatoes, so keep trying Idaho! 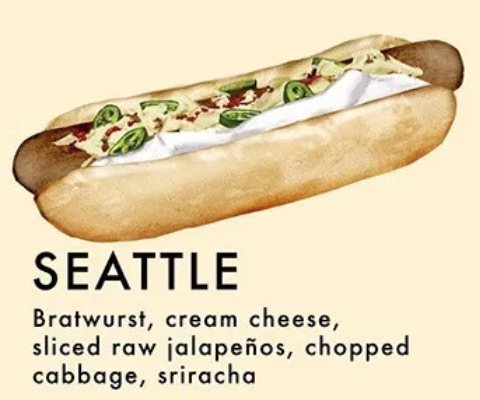 The Seattle dog originated in the late 1980s/early 1990s and was the unofficial food of the city’s emerging grunge scene. It’s distinguished by its featured topping — cream cheese dispensed with a caulk gun. Which I can’t say without laughing because I’m a 14-year-old boy apparently. It’s often topped with cabbage, onions and Sriracha sauce, and of all the dogs on the list, this is the weirdo I most want to try. (What can I say? I’m a sucker for seeing a caulk gun in action.)

In Tucson and Phoenix there are hundreds of dogueros (that is, street carts) that sell this local favorite. If you guessed that there would be a Southwestern vibe to this dog, you’d be correct. It consists of a hot dog that’s wrapped in bacon and grilled, served on a bolillo-style bun, and topped with pinto beans, onions, tomatoes and a variety of other condiments (including mayonnaise, mustard and jalapeño salsa). Like the Southwestern home decor my mom was obsessed with throughout the 1990s, this dog originated in the late 1980s. 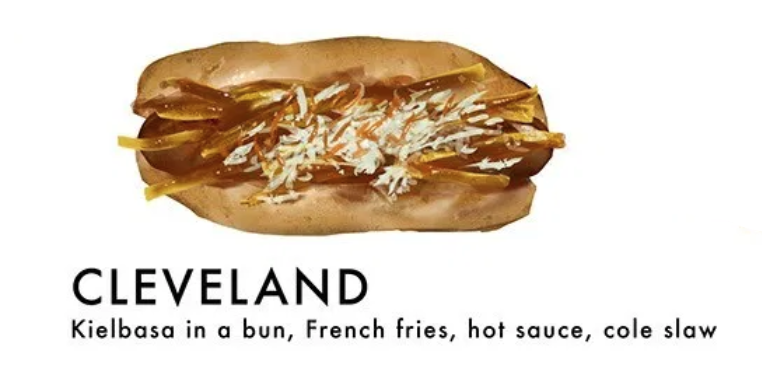 Kielbasa in a bun with French fries, hot sauce and coleslaw? Yes, please. I will never complain about French fries being added to anything. This sounds so good that it almost absolves Ohio for the crime against humanity that is Cincinnati Chili. 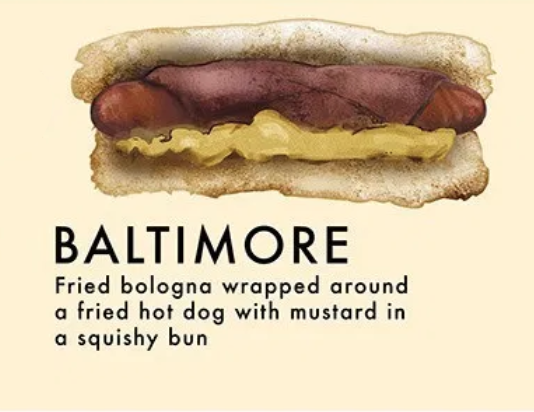 Baltimore has been in the news a lot lately, so the last thing I want to do is add to the dunking. But then I read what their local fave hot dog combo is: a fried hot dog wrapped in fried bologna. At least we get mustard and a squishy bun, but bologna? I still haven’t recovered from the trauma of my mom’s bologna and mayo sandwiches from childhood. Much like a horrid ex, I just don’t see that particular meat ever touching my lips again.

No matter what you put on your hot dog, though, I think we can all agree that the best way to eat one is while making direct eye contact with a guy you’re interested in as you put it in your mouth.