I Regret to Inform You That Bootcut Jeans Are Back. Here’s What You Can Do About It

The 1970s have returned, by way of the 1990s and early aughts. But is there any good way to pull off the look, especially if you were there the first or second time around?

Vintage clothing dealer Chris Juan started selling on the site Depop in 2016, but it wasn’t until earlier this year that he started stocking bootcut jeans. On a recent morning, for example, he featured, among his V-neck sweater vests and Old Navy half-zip fleeces, a pair of light-wash flares from Gap ($35) and a stonewashed pair of Levi’s 527 ($30), to name just a few.

Juan, 21, who wears a choppy bowl cut and mustache, first saw the style gaining traction shortly after he noticed Western buckle belts and cowboy boots making inroads into the vintage fashion scene. Today, he says bootcut jeans are among the top three styles that he sells. “Whenever I put up a pair, they sell out right away,” he said. “They’re awesome. We’re all going to live out our cowboy fantasies.”

So it’s with deep regret in my heart, dear friends, that I come bearing terrible news: The bootcut jean is back, baby.

This denim cut, troubled by its association with Boomers like Simon Cowell, is a polarizing style. “They’re so appalling they’re a crime” is one of the less extreme sentiments out there. But like everything in fashion, the pendulum eventually swings back, and even the most egregious faux pas are seen with the fresh eyes of a new generation, unfettered by its past associations with, in this case, Abercrombie & Fitch mall culture or the Britpop wave of the late 1990s.

The first whisper (so quiet, so menacing) of this dreaded return to form happened way back in the halcyon days of late 2018, when the fancy French label Balenciaga showed stonewashed (!) versions that pooled lazily around models’ ankles in its seasonal lookbook: Droopy, limp, the denim version of Mitch McConnell’s chin.

People were horrified, but that, of course, was the point: Under the direction of the canny Georgian designer Demna Gvasalia, Balenciaga has made a reputation for itself in recent years by doing something much harder than merely making Very Cool Things™ and then charging a shit-ton for said cool things. Gvasalia, instead, is hellbent on the difficult task of making very ugly things into desirable, covetable bestsellers. Clunky dad shoes? Oversized blazers? Itty bitty sunglasses? So ridiculous. And yet Balenciaga has helped make those the things that TikTok teens want to wear.

So when these flared jeans bubbled up online, they became an immediate in-joke, causing GQ in 2018 to proudly proclaim “Boot-Cut Jeans Are Making a Comeback,” a notion that the internet collectively slapped down.

But, a-ha! Here we are two years later, with bootcut jeans insidiously inching their way from the periphery back into the center of the culture (and, more importantly, onto your ass). Hedi Slimane, the brooding designer who’s a legend in certain menswear circles, showed skinny bootcut jeans on his stick-thin (mostly white) models for the French brand Celine.

Acne Studios, the Scandi-funky-cool label out of Sweden, gave us a relaxed cool-kid pair as well. And how much, praytell, are the Swedish kings of cool charging for it? $300! To wear bootcut jeans! In the year of our Lord 2020!! But even Levi’s had been promoting their bootcut 517 style pre-pandemic. Cool, younger men like Harry Styles and Steve Lacy are wearing them, giving a new generation just enough fodder to consider whether or not they, too, could pull them off.

“We definitely should have expected bootcuts to return, along with all sorts of other trends from the early 2000s,” says Andrew Luecke, author of the book Cool: Style, Sound and Subversion. “Since the 1970s, the fashion cycle has really run on 20-year nostalgia cycles, so it should be no surprise that what was cool around the year 2000 is cool in 2020.” You may have casually noted, for example, that the skinny jeans and rigid selvedge styles that were once popular have faded from view and in their stead, an influx of slouchy jeans have materialized, a silhouette that was popular around the turn of the century. “Bootcuts are just a continuum of that,” Luecke says.

The men’s stylist Warren Alfie Baker, who dresses the real life human bodies of celebs like KJ Apa, Matt Bomer, Patrick Stewart and Lucas Hedges, admits to wearing them in his youth, during the late-1990s (Diesel was his go to brand), pairing them with indoor soccer shoes. “That was the London look for me,” the 38-year-old says.

While Baker admits he wouldn’t wear bootcut jeans himself (though he’s okay with wide-leg!), he appreciates the style when executed properly. “I was on a shoot recently and the photographer was wearing a bootcut jean,” he says. “He was about 6-foot-3, from the Midwest and crushed that cool cowboy vibe. He wore them with a cowboy boot and a vintage tee. I wasn’t mad at it at all.”

Bootcuts, in their current iteration, are impressive because they not only conjure the late-1990s/early-aughts, but the 1970s as well. “Levi’s introduced its first bootcut model, the 517, in 1969, so they will always have that sort of hippie coolness to them, even though it’s hard for some people to admit that hippies can be cool,” says Luecke.

In the 1990s, of course, there was a 1970s revival, so in today’s rehashing of the 1990s, we get the 1970s, second hand. Last year, the 50-year anniversary of the infamous Summer of ’69 had many people looking back at that time, taking in its promise of hope and freedom (Woodstock, the NASA moon landing) and its darker edges (the Manson murders). The cherry on top, of course, was Quentin Tarantino’s love letter to the era, Once Upon a Time in… Hollywood where a swaggering Brad Pitt putters around L.A. in, yes, bootcut jeans. And of course, there’s that cowboy mystique that’s been mentioned, a whiff of that outdoorsy hyper-masculinity — an interesting energy to conjure at a time when we’re all stuck inside staring at screens, and when a young generation seems blasé at best regarding traditional gender roles.

Bootcuts jeans fell out of favor — hard — at the dawn of this millennium. “They got a really bad rep when Abercrombie and Seven changed the classic silhouette during the 2000s, taking away the slim waist and thigh, and making them baggier all the way across, which is where you get that Jersey Shore baggy bootcut look,” Luecke says. “That style really turned people off, but I think there’s room for a resurgence of the slimmer, more classic bootcut style, which is what Hedi Slimane showed. That style is pretty classic, and again goes back to the late-1960s, all through the 1970s and also the Brit Pop thing in the 1990s.”

Still, part of the appeal of the nascent craze for bootcut jeans is actually the fact that they are so, well, unflattering. “The young, hip and good looking love to find things so ugly and out of fashion that only they can pull them off. That’s where the Crocs and clogs trends came from, as well as stuff like the light-wash dad jeans and stuff,” Luecke says.

But should the average, non-Harry Styles human attempt this? Can anyone who was around for one or both of the initial bootcut crazes ever pull it off again?

The jury’s still out. Juan, who represents the Gen Z, cool-kid style of eBoys, models the bootcut jeans on his Depop page with boxy T-shirts, shrunken vintage sweatshirts, throwback Adidas sneakers or clunky sandals, and it’s surprisingly convincing. Personally, he says, he prefers a bootcut pant in non-denim fabrics. “I like [it in] corduroy,” he said. “And I’ll wear them with a cowboy boot.” 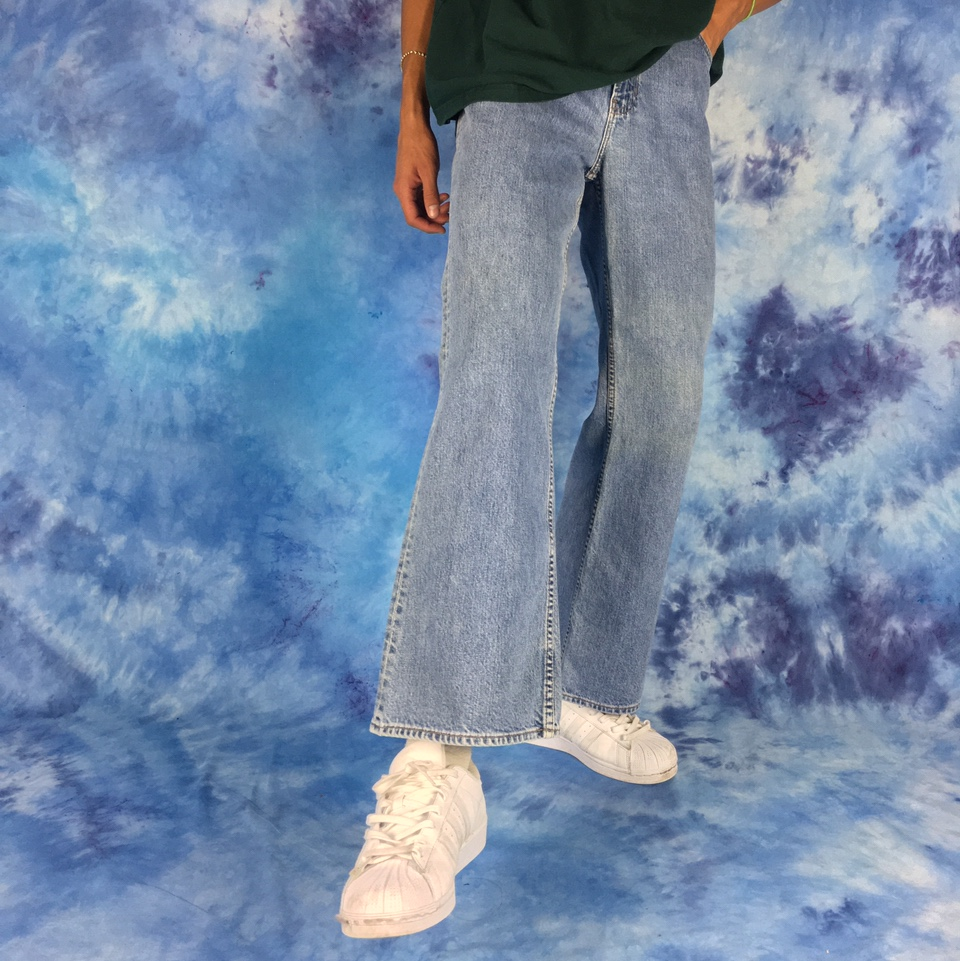 Warren Baker spins it in a different direction, something a little more suave and with a 1970s swagger (similar to what Tom Ford showed for fall). He forewarns that the bootcut — especially the slimmer, sleeker version — is usually best for “a specific body type” (read: tall and thin). “I would style a stonewash bootcut jean with a cool, light boot with a slight heel and a Cuban-collared shirt with a white tank underneath for some layering,” he said. “A lil’ bit of a Woodstock-type feel.”

In other words, this kind of thing:

So, really, if you’re thinking about getting back in bootcut, you have to decide which tribe you belong to: the trend-savvy rake (like Celine), the urban cowboy (get out your Levi’s, partner) or the Reality Bites burnout 2.0 (“Bro …”) and then really commit. Like, if you’ve got the legs and confidence for those fancy 1970s flares, get to it. Because why the hell not?

When you think about it, this whole revival boils down to a motley trio: hippie, cowboy, and burnout — three archetypes as American as… well, a pair of blue jeans.

Max Berlinger is a Los Angeles-based writer who covers fashion, grooming and all the weird things that fall under “lifestyle.” He wrote this bio about himself in the third person.