The French Tuck is over. It’s time to rock a fully tucked-in shirt — a more flattering fit no matter what you look like

Last year, Queer Eye menswear expert Tan France took the straight world by storm when he reintroduced the simple beauty of tucking in your shirt halfway. The French Tuck, as it’s now called, is an easy way to make any top look flattering and fitted without committing fully to a tucked-in look.

My question is: Why? What’s so scary about tucking in your shirt? The French Tuck is fine — it does a good job of accentuating your best assets in front — but it leaves your back half looking sloppy. Also, if you want to stay on-trend, know that the year of the sartorial half measure is over. It’s time to embrace the full tuck — and thus, your whole body. (Want proof? Look at France himself. Dude is tucked.)

But I understand if you have reservations about steering into Tuck City. Won’t it show more belly? Isn’t it — gasp — effeminate? Dorky? Childish? What about your pasty legs? Fear not, brothers. Your roadmap is here.

For the past year or so, you’d be hard-pressed to find me in an untucked shirt. It started last summer when I got inspired by Skate Kitchen, an underrated film about an all-girl skateboarding collective based in New York City. These young women look effortlessly cool soaring down Lower Manhattan streets in their best kicks, caps, high socks — and, yes, tucked-in shirts.

Throughout the film and in her real life, lead Rachelle Vinberg, 20, routinely rocks a crisp, tucked-in tee. So now I do, too. It’s all part of my ongoing effort to appear to be a youth.

Menswear, too, is well ahead of the trend. Luxury brands Off-White and Supreme — with celebrities like ASAP Rocky and Brooklyn Beckham — brought the tucked-in look to the red carpet and fashion magazines alongside chunky sneakers and cross-body bags.

In 2016, GQ contrasted then-President Obama’s dad-style shirt-tucking (shirt too big, pants too plain) with model Sean Pablo‘s. The younger man pulled off the look, Jake Woolf wrote, by rocking “the retro sneakers, slim un-Obama chinos and skull cap,” which “make this look feel classic instead of corny.” The trick is mixing styles to “separate you from the dad pack.”

That’s not to say the tuck is just for skaters. I’m no skater boy. Far from it, in fact. My look is more, “I could hit up a music festival, but I’m ready at a moment’s notice to sit down and gab with a group of moms.” A tucked-in shirt just so happens to bridge today’s cool-kid fashion with a look that’d make Karen next door say, “What a nice, handsome young man!”

I must admit part of my crusade against free-hanging shirts is to spite my arch-nemesis: Untuckit, the men’s clothing retailer specializing in slightly differently fitted (but still bland and expensive) shirts for young professionals.

The brand’s version of disruption is creating button-downs that are a bit shorter — but as Jezebel‘s Hazel Cills writes, Untuckit’s real, implicit promise to men is helping them dress themselves in the “post-mom economy,” reducing the stress of choice for guys who feel uncomfortable shopping. “It’s not just that the product is physically better, it’s that it eliminates work: the work of tucking in a shirt in the first place, the work of tidying oneself up,” Cills writes, quoting an Untuckit sales associate who tells her, “Most guys don’t want to try on a bunch of clothes or styles at once.”

Masculinity comes in all different body types, personalities and styles, and so, I get frustrated when hearing that “most men” don’t like to try on clothes. I’m tired of brands catering to cisgender straight men as their primary shopper — only to then coddle their insecurities about dressing themselves. “The brand has built a shopping ecosystem for men that cushions every interaction in case they get too frustrated with the process,” Cills writes.

What should we do instead? I’d like to start encouraging men to expand their sartorial adventures without feeling overwhelmed or being labeled effeminate. For me, that starts with wearing a tucked-in shirt.

Even for fashion-secure menswear shoppers, an untucked shirt can be a mask. Tucked-in shirts can accentuate the belly and butt, leaving you feeling more exposed. Understandably, many men avoid tucking in their shirts for this reason. They don’t want to show off a gut or pair of love handles. I get this, but a well-fitted, tucked-in shirt — one that doesn’t bag around the waist — can look even more slimming and draw attention away from the midsection.

Just look at me here without a tucked-in shirt. There’s no polish. Nothing fitted or flattering. No “look.” Just a shirt and shorts: 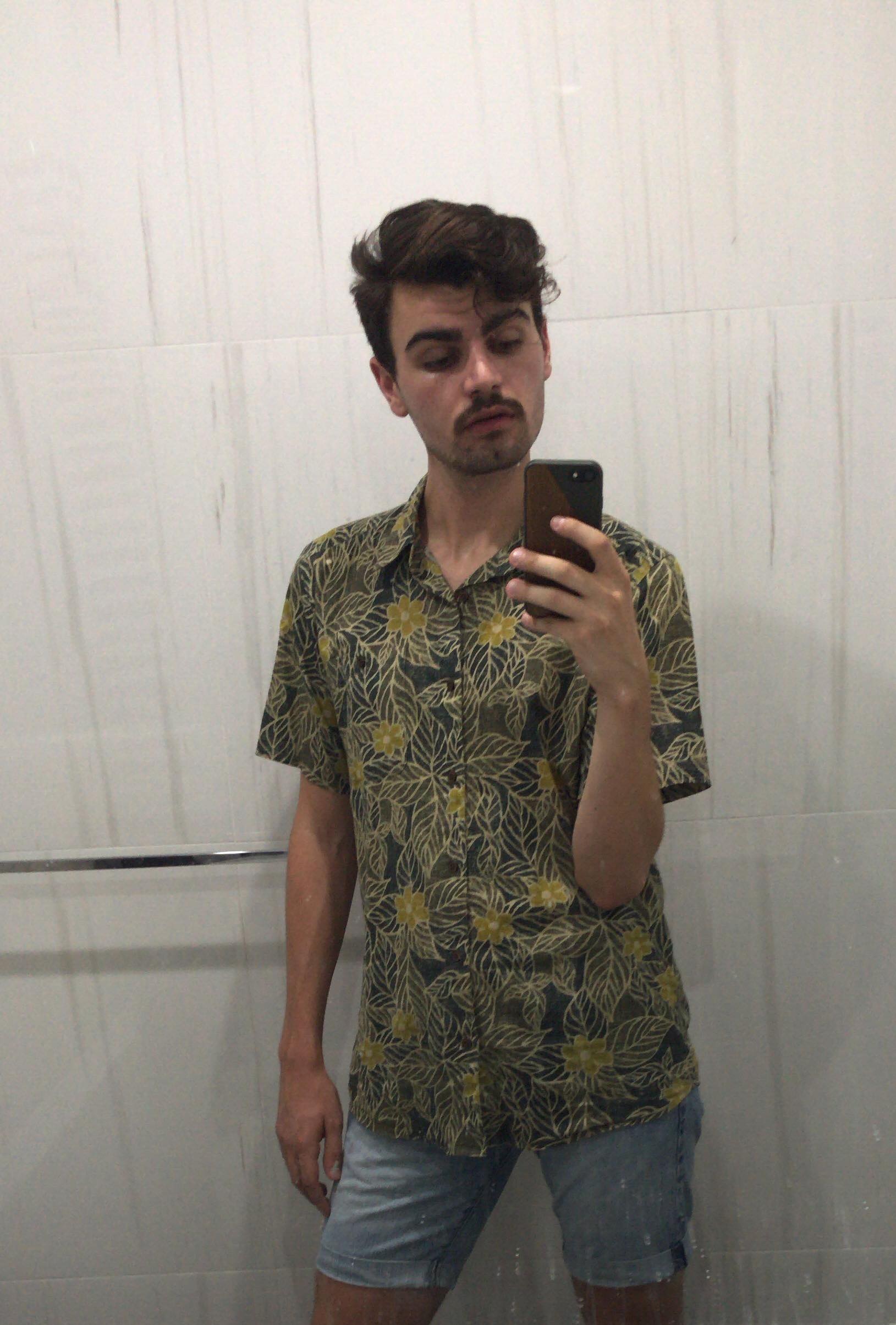 Now a French Tuck. The belt is highlighted, sure, but the shirt is bagging around the waist, creating the illusion of a bigger belly than the one I’ve got: 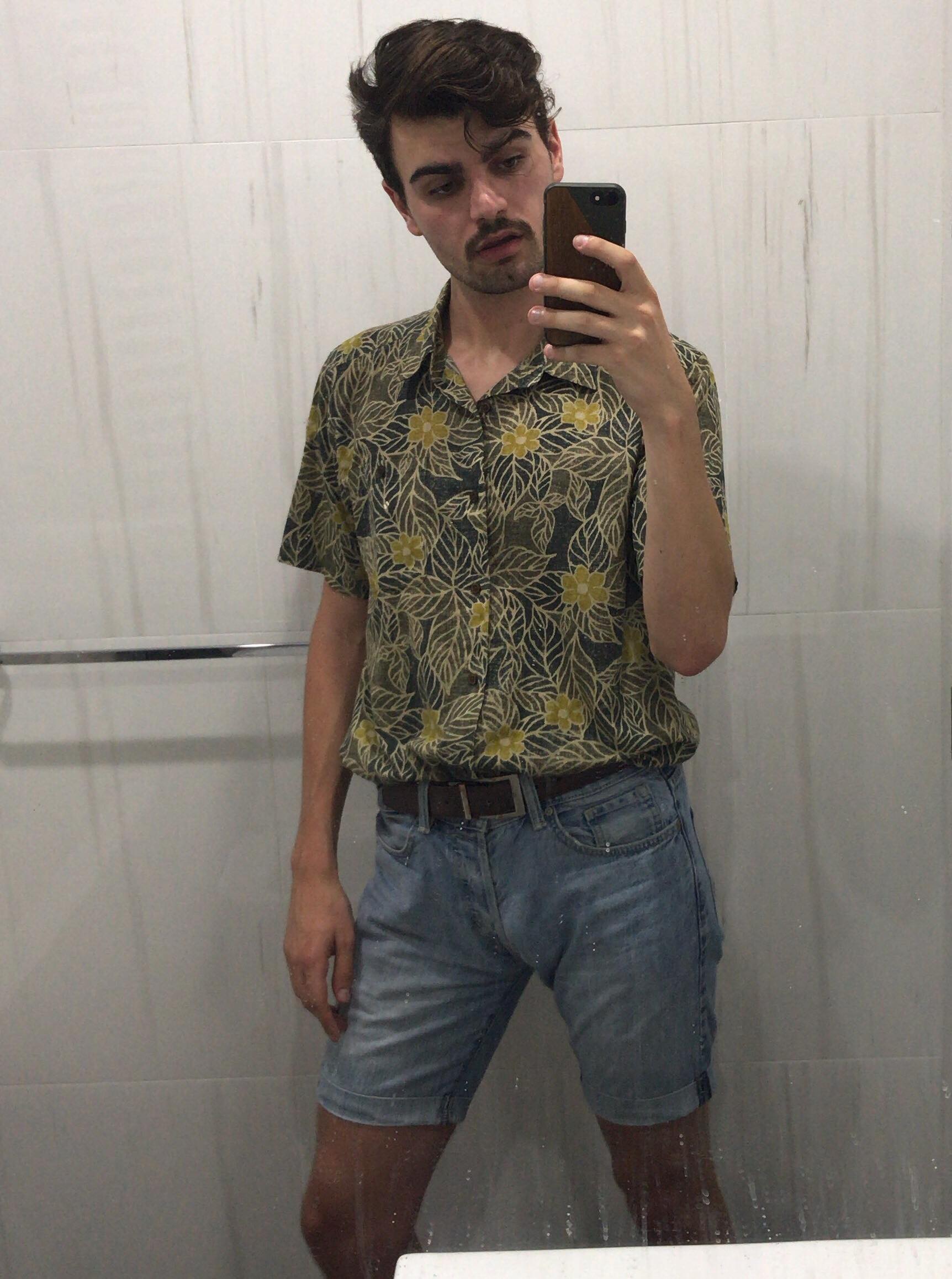 And finally, a full tuck. Belt (and package) are highlighted, waist isn’t bagging and the line of buttons is flat: 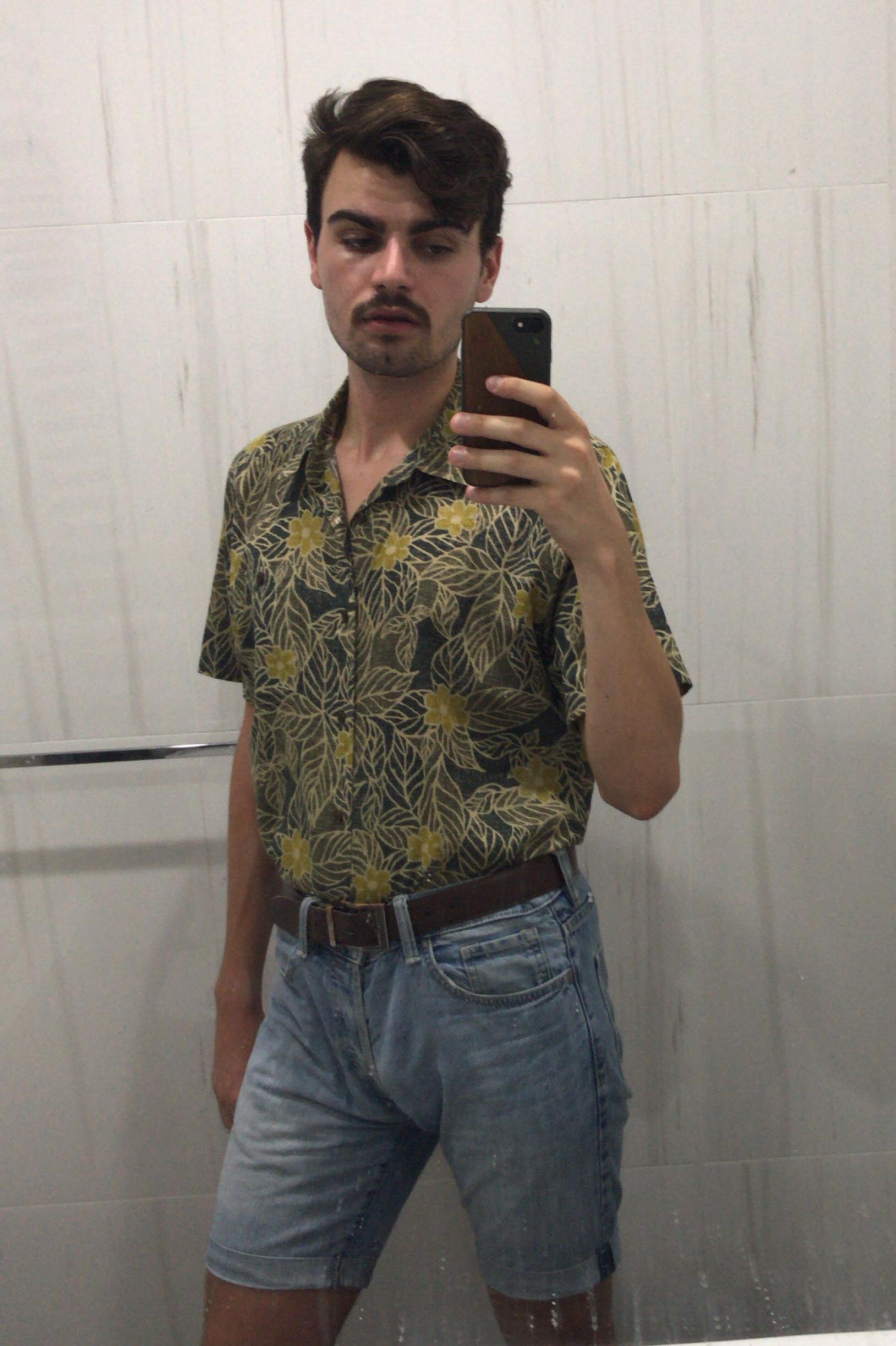 This isn’t to say every shirt must be tucked in. Some items, such as crop tops or jerseys, are meant to live untucked. But there’s nothing worse than a perfectly curated outfit ruined by the bunching-up and wrinkling of fabric pooling around the waist. This inadvertently highlights the exact part of the body most men want to hide with an untucked shirt. You’re doing yourself no favors!

I’m joking — well, just slightly — about the offensiveness of untucked shirts. The bigger problem is that fast fashion and mass-market brands aren’t designed to look good on many different body types. I have a conventional body type, which makes it all-too-easy for me to say, yes, tuck in that shirt. But it’s not just us skinny white boys who can benefit from this fashion choice.

For guys of average height and below, untucked shirts have the tendency to make the legs look shorter, while tucking can actually visually elongate those lovely thighs and calves. Look at how comedian (and original short king) Jaboukie Young-White does it — serving us legs.

Big Boys Are Even Cuter

The same trick works for my larger brothers. We all know big boys are cute, but a tucked-in shirt provides a more defined shape and helps shrink the torso, as demonstrated by menswear influencers Michael-Anthony (aka @thebigfashionguy) and Troy Solomon.

Are you worried about showing off your butt? Honey, it’s 2019. The Badonka-Dudes are in. We’re stanning full-body positivity. The gals and the gays want to see that butt. Show. It. Off — and don’t forget your thighs, too. It’s actually your patriotic duty.

Men should be tailoring their clothes to fit them well, as Tan France says over and over on Queer Eye. But the cost and time that requires makes a perfectly tailored top a nonstarter for me and many other men. Tucking in my shirt, then, is a chance for me to feel like I have ownership over my style.