How to Plate Your Shitty Takeout Like a Michelin Chef

It seems like such a small thing, but I long for the sensation of watching a beautiful plate of food float across a restaurant, right to my table. It’s the anticipation of eating something delicious, sure, but also the sliver of joy I feel when I see an artful arrangement made just for me.

Instead, for the past year, the great bulk of my restaurant meals have been consumed on the couch, straight from whatever eco-friendly paper container they’re delivered in. I’m grateful that the pandemic didn’t stop me from cooking or eating well. But for someone who truly loved saving up cash to splurge on fine-dining experiences, the shift to only consuming takeout feels a lot like being a film geek in an era of shuttered movie theaters.

Dining out isn’t just about the food; it’s about the small details of hospitality, the energy of intimate moments happening organically all around you, whether you’re at Spago or a suburban Denny’s at 2 a.m. In that vein, when I think about an elegantly plated entreé, I think of a time before COVID, when it was safe for vulnerable line cooks to fuss over your dish and make it almost too pretty to eat.

I understand that, to many of you, people placing herbs with tweezers and carefully spooning butter sauces on tiny pieces of meat can feel, intrinsically, like pretentious bullshit. But we still have to recognize that we really do eat with our eyes first: An attractive plate boosts our appetite, per this study, and we even think of “pretty” food as being more nutritious for us, too.

As for executing such aesthetics at home, I have good news: You don’t need much technique or tools to replicate chef-y plating at home, and you’ll get better with every ugly box of takeout you experiment on. To prove it to you, I decided to style up three different meals that look mediocre in the container — from the likes of Popeyes, Panda Express and a local fast-casual American restaurant — using some easy restaurant-pro tricks and a handful of homemade ingredients.

With these three dishes, I’ll demonstrate some of the basic rules in the art of fancying up takeout:

If you’re worried about the food cooling as you fuss about, you can use pre-heated dishes — or, even easier, put your plated dish into a warm oven, leaving off any cold ingredients (like slaw or pickled onions) until you’re ready to serve. This is a genuinely hilarious way to troll a loved one (“Hey, I got Popeyes for dinner…”), but you will also likely find yourself inspired to cook and plate home meals with more care, too. And remember, it doesn’t have to be all that complicated: Even fine-dining chefs are into simpler, more organic arrangements these days.

All I know is that I eat more slowly when I have a beautiful plate in front of me, taking the beats to appreciate the work that went into it. Eating out was an approachable luxury that I took great solace in, so it’s a small salve to take mundane delivery food and make it a little classy during times like these. 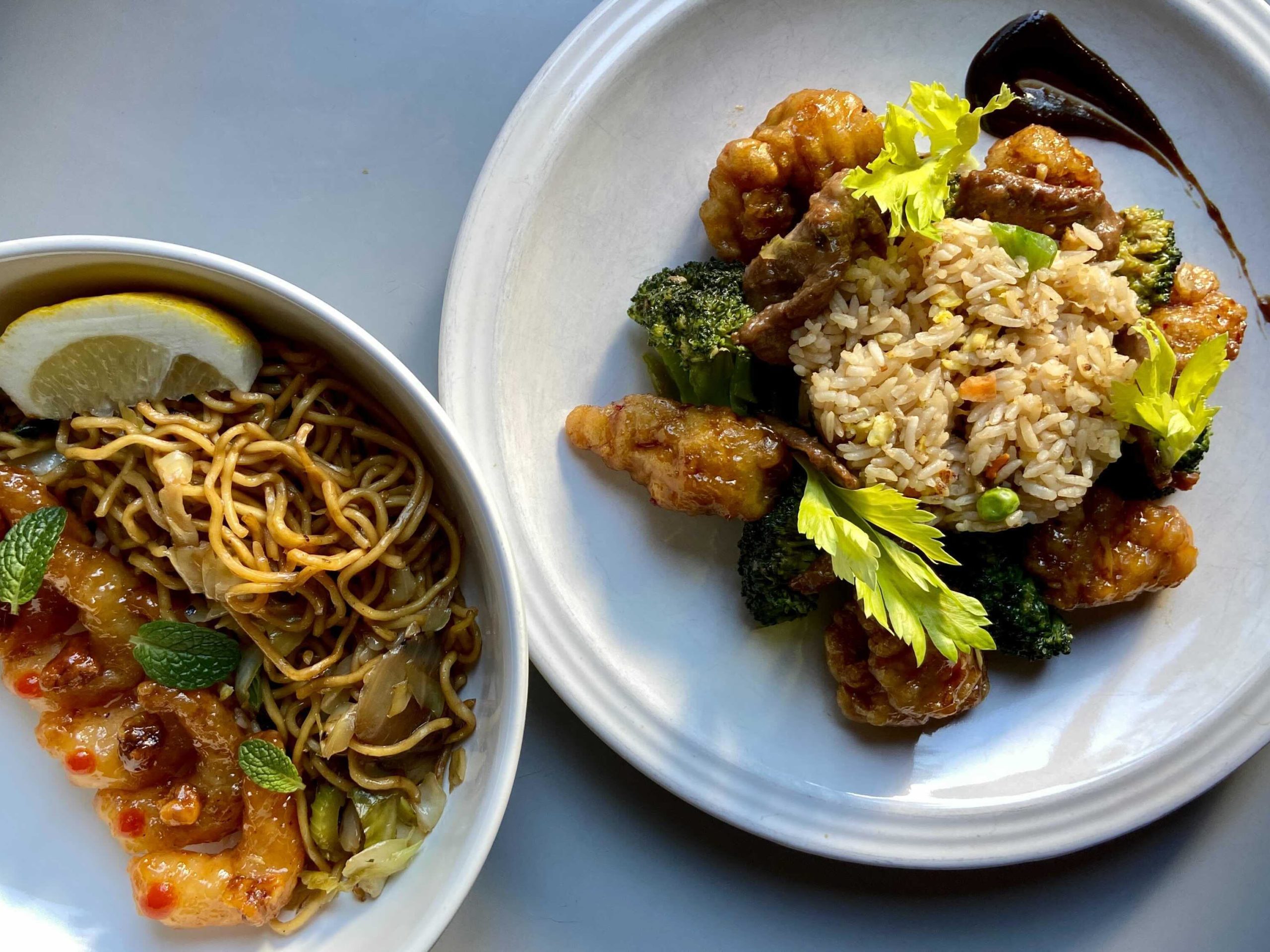 First, a three-item plate from everyone’s favorite suburban Chinese franchise. I grew up eating the stuff weekly, and laughed out loud at the ridiculousness of teasing this food into cute aesthetic patterns. The key was to split up the meal into two distinct dishes, with one centered on chow mein and the other on the fried rice.

A major thing to consider when plating is whether you want it to look symmetrical or not. For the chow mein, I opted for a hyper-trendy asymmetric layout, with all the noodles nestled into the side of a bowl and a strong centerline of honey-walnut shrimp, assembled in a neat row. I decorated each shrimp with a glazed walnut piece, as well as a neat little dot of sriracha. Lastly, I placed four little leaves of mint from my garden, plus a wedge of lime.

For the second plate, I wanted to go for a symmetrical Chinese banquet-style presentation. So I filled a small ramekin with the fried rice, packed it down and inverted it onto the center of a plate, then carefully surrounded the mound with alternating pieces of broccoli, orange chicken and glazed beef. All I did to garnish was decorate with some celery leaves and a round pool of hoisin sauce, which I dragged with the back of a spoon to create the ubiquitous sauce-swoosh. 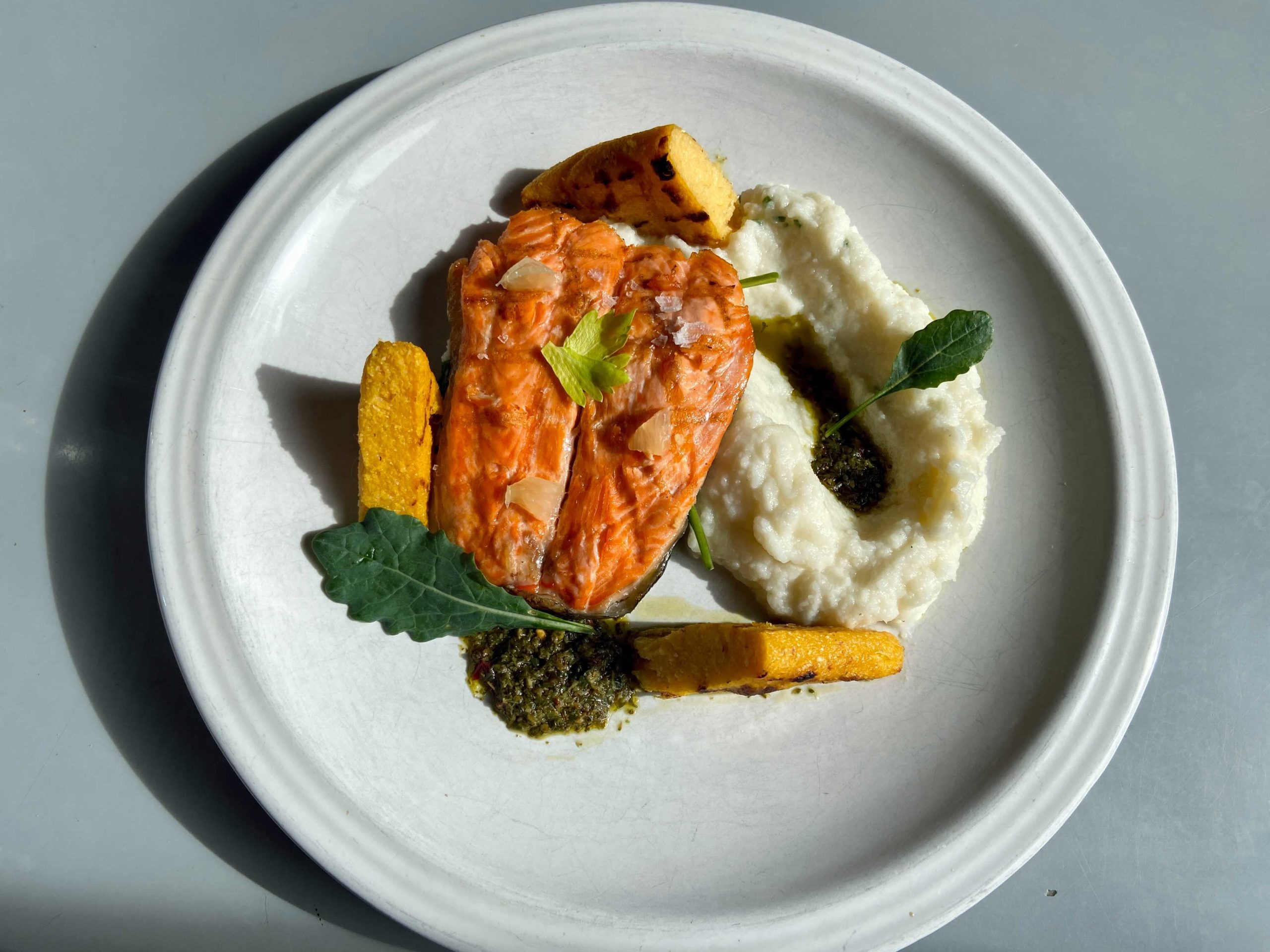 I went a little more freeform with the two other meals, consisting of a salmon plate from Bay Area salad spot Mixt and a two-piece combo from Popeyes. The salmon came with cauliflower mash, grilled polenta and a chimichurri sauce, and for the plating layout, I took inspiration from the triangular shape of the fish filet. I put down a mound of cauliflower and used the back of my spoon to smear it into a circular twist, then put the salmon down at an angle, elevating the filet slightly. I added the chimichurri next, making two individual pools rather than a nondescript, messy drizzle. I cut the polenta squares into triangles, mirroring the fish, and stood them up to add a little height.

Two-Piece Combo with Mac and Cheese from Popeyes 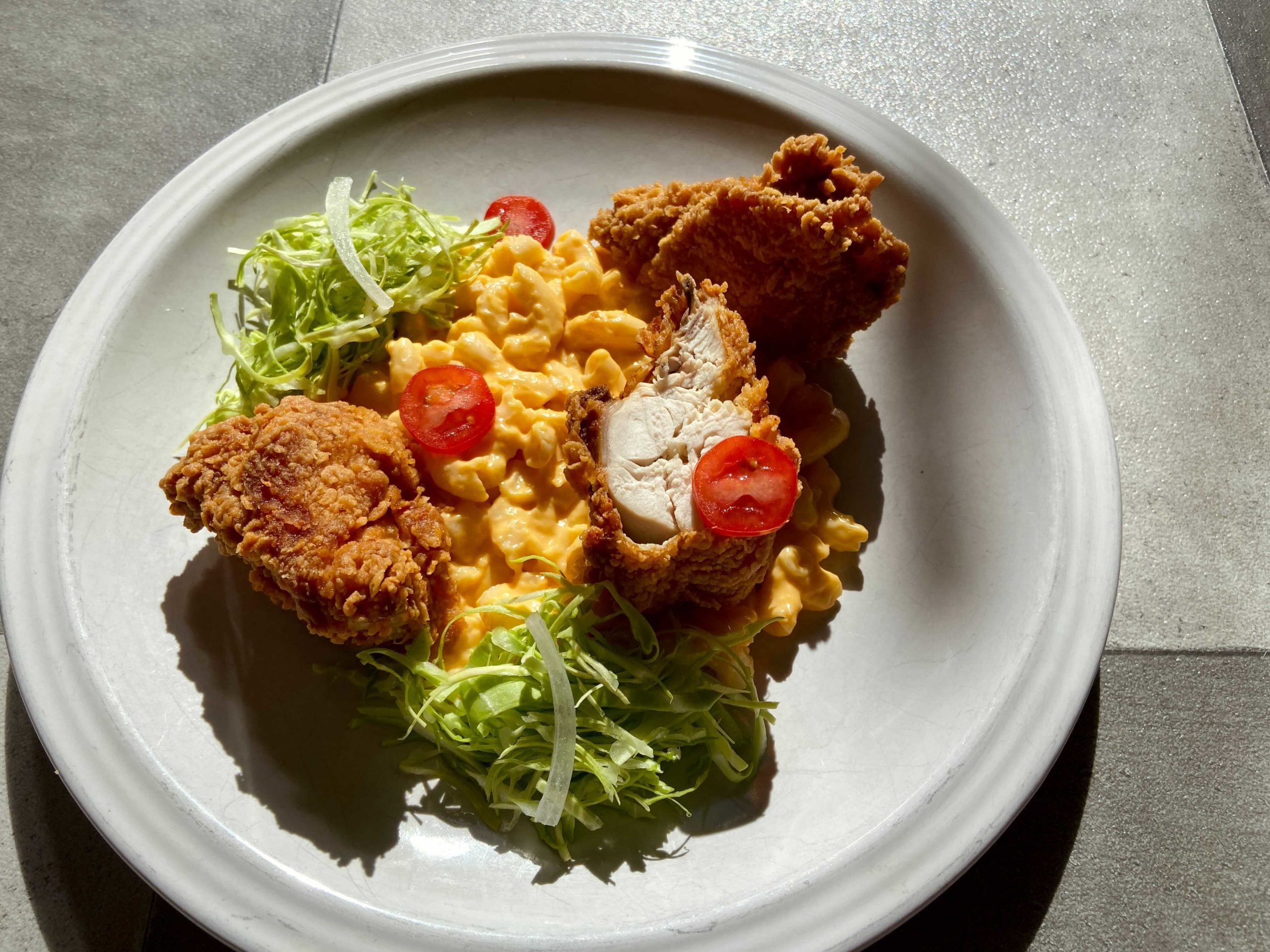 The Popeyes plate used a similar idea, just with a flat circle of mac and cheese instead of a circular swoosh. I cut the fried chicken into smaller pieces, then stood them up on their flat edge, creating little mountains. In between the mountains, I decided to add some shredded cabbage from my fridge, dressed with a little white wine vinegar. The final touch were three little tomato slices, dipped into Crystal hot sauce for a tangy kick, and two slivers of white onion on the homemade slaw.

All it took was seven minutes, a couple of spoons, a pair of chopsticks and a wet paper towel to wipe the rim of the plate down. It’s not the same as being at a restaurant, of course, but on a nondescript day, a little aesthetic flex is just what I crave.