For Brooklyn-based bartender Alissa Atkinson, Hot Vax Summer started off as a trash fire. While grieving the death of the close friend she cared for during his battle with oral cancer, her live-in boyfriend of four years blindsided her with a breakup. After a few weeks of crying and couch-surfing, the 38-year-old started texting with loved ones who were enduring crises of their own — a friend dealing with a sick parent, another friend in the midst of heartbreak and a sister struggling with postpartum depression.

It was only a matter of time before her friend sent a meme that encompassed their collective experience: 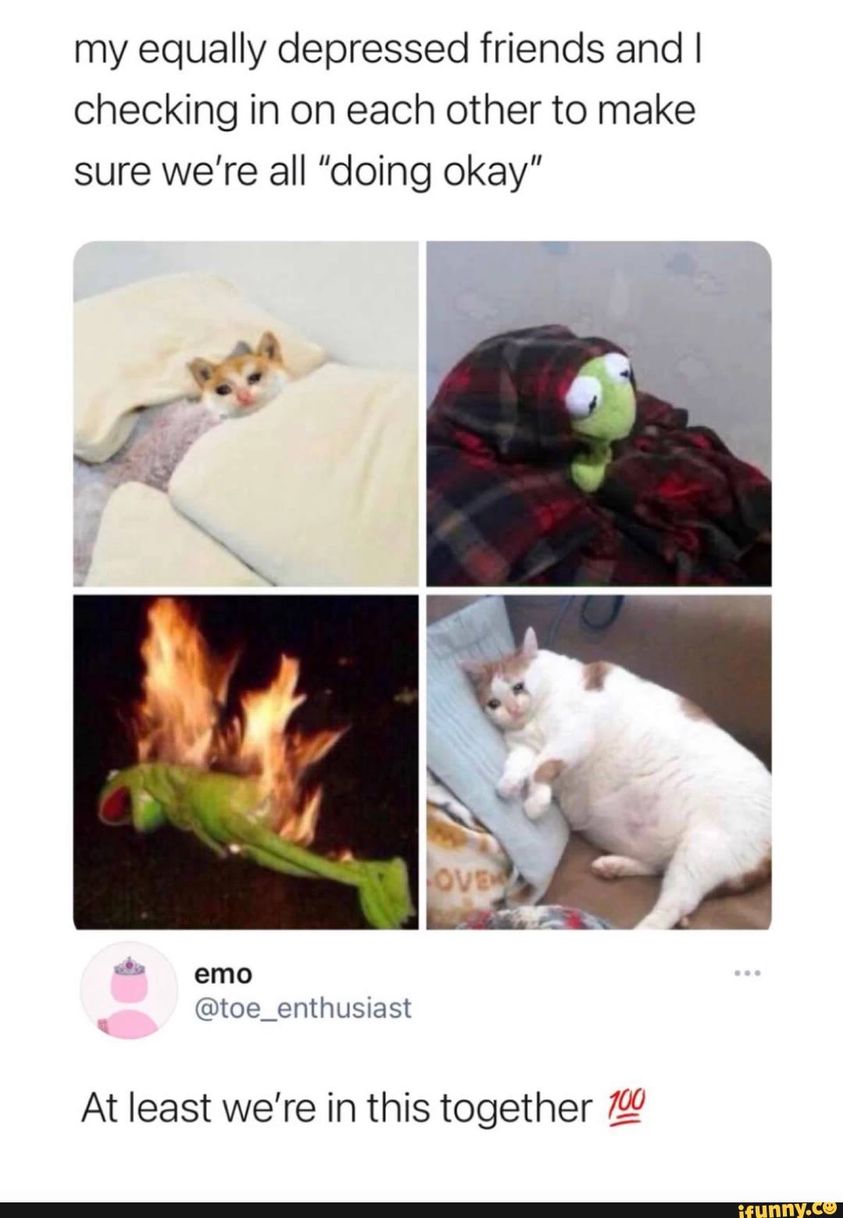 Atkinson laughed, thinking about how ridiculous showing up for her people felt while her world was metaphorically burning. And yet, it also seemed like a crucial part of coping. “I was so isolated when my friend was dying, I only saw my partner,” Atkinson tells me. At the same time, checking on people when she wasn’t doing well felt absurd because she’d always been told to do the opposite.

Much like the safety instructions on an airplane for oxygen masks, we’re often taught to take care of ourselves first, before assisting others. But one of the glaring oversights of this premise is that maintaining meaningful relationships is an integral part of how human beings remain healthy. “Decades of research in the areas of trauma and depression, but also positive psychology — a field studying predictors of happiness — tells us that social support, both giving and receiving, is likely the single best predictor of happiness and well-being, and the most protective factor of all following exposure to stress and trauma,” clinical psychologist Ben Dickstein explains.

Among the most well-established models of this can be seen in recovery communities like Alcoholics Anonymous, where acts of service and fellowship help treat psychological distress when self-medicating with drugs and alcohol is no longer an option. But in our individualistic American culture, we’re conditioned to believe that “when our essential needs aren’t being met, we’re going to focus on satisfying those before moving on to love and belonging,” Dickstein says.

That, of course, is true in extremes. Someone who is in crisis cannot supplement professional help with asking a friend about their problems, and connecting with others solely through trauma isn’t healthy either. But there is a lot of gray area between trauma bonding and shutting down completely. So instead of waiting to feel better before becoming an active participant in your relationships, or an “inside-out approach,” Dickstein recommends taking an “outside-in approach,” or “living congruently with values and having this improve mood secondarily.”

“This is often more empowering because it means that one can proactively work on mood rather than waiting for change,” he believes.

One way to be there for people regardless of what’s going on in your life is by setting flexible boundaries. To that end, psychotherapist Skylar Ibarra has found that people often think about boundaries in absolutes — i.e., most people believe a boundary is a “firm yes or no,” whereas Ibarra defines boundaries as “how we teach others and ourselves how we should be treated.” In this case, boundaries aren’t a hard line that says you can only be supportive to others when you feel better, but a moving target that allows for limitations in how you show up. For instance, by communicating that you might not be in the best place either, it sets a boundary where you can be present without knowing what advice to give.

“The mantra I share with my clients is, ‘Create space, not change,’” Ibarra tells me. Although the intent is to make sure people we care about are alright, healthy boundaries mean not dropping everything for them in an all-or-nothing approach to support. It’s more about sitting in discomfort with other people as opposed to sitting in isolation. “When we’re able to listen to our friends without feeling responsible for making them ‘feel better,’ we can really be there for them without the emotional energy it takes to try and push someone who isn’t ready,” Ibarra continues.

Obviously, that’s easier said than done. But like therapy, meditation or any other mental-health practice, it’s payoff cannot be summarized in a single meme — not that the meme is without value. “I think it’s a great thing to bring attention to the topic,” Dickstein says. “Humor is a powerful tool for dispelling stigma.”

For Atkinson, it wasn’t that her misery loved company, but she did crave perspective and connection while dealing with her trauma. Not to mention, the more she showed up for people who were there for her, the stronger and more secure she felt. Eventually, these interactions became more efficient, as her friends and sister had developed almost “a shorthand for how we talked about feelings and symptoms of grief.”

Slowly, Atkinson noticed that she was being kinder to herself, even in private moments, from practicing this compassion. “We don’t treat ourselves as gently as we treat our friends, so using the language we use toward our friends you can internalize the same thing for yourself,” she points out.

Atkinson is in the process of applying to grad school to become a therapist herself, but in the meantime, she doesn’t need a degree to be a friend to someone who needs her support — in fact, she doesn’t even need to be having a good day. After a year of loss and trauma, Atkinson is no longer sitting tight until a good moment arrives. Or as she puts it, “If we all waited until we weren’t wading in shit to be a shoulder for our friends to cry on, we’d never be there for anyone.”