Fellas, is it gay to stick your hemoglobin in another guy’s dong?

Donating blood is a noble and selfless act: A single donation can potentially save up to three lives. However, there’s one complexity of blood donations that much of the internet seems (1) stuck on and (2) to have taken as a fact: At least some of that blood, they say, will end up in a bunch of boners. 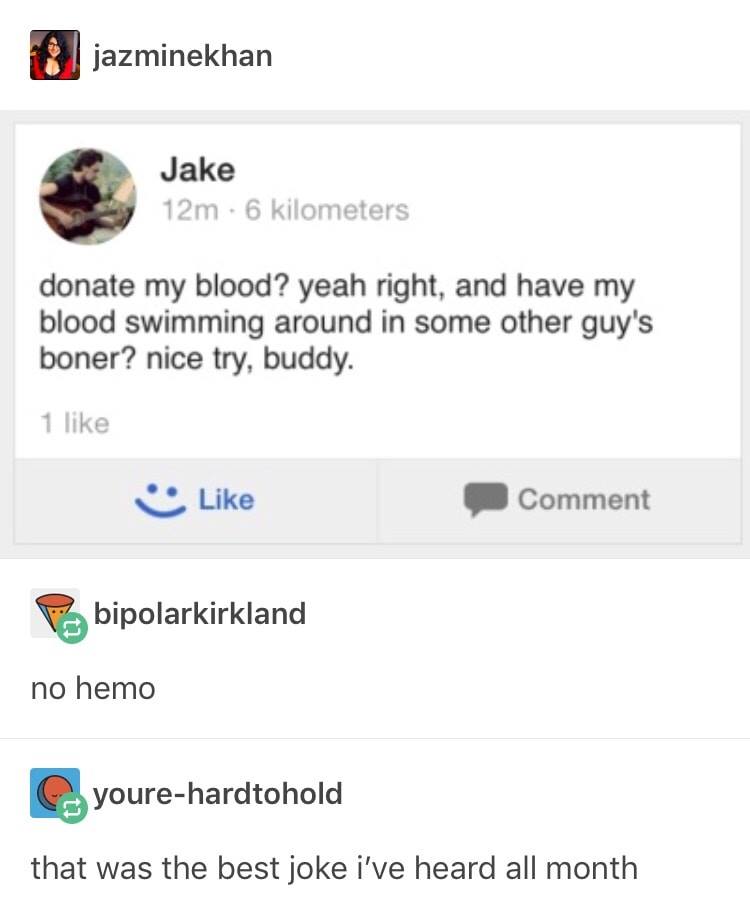 In one recent Reddit thread reminding commenters that the blood they may have donated is currently in another dude’s boner, commenter RusherOfDin remains positive about the whole thing: “By proxy, I’m fucking his wife! Later, virgins.” In another similar, less recent thread, commenter BadTitties seems less than thrilled about the idea: “This is a terrible thought, since my girlfriend’s dad donated blood to me when I had surgery,” they write [sic].

But while this might be a silly thought — fellas, is it gay to give blood? — the big question is, does donated blood really end up in the recipient’s boner, assuming the recipient is, in fact, a man?

“That meme is scientifically correct,” confirms Alex Shteynshlyuger, director of urology at the New York Urology Specialists. “Blood circulates throughout the body, through every organ, including the penis in men as well as the vagina and clitoris in women.” So you’re not only supporting boners when donating blood, you’re maybe also helping women get off, which, as we may have mentioned, is a cause that could use the extra help.

Shteynshlyuger does add, however, that people who are receiving blood donations are rarely in a position to be popping tents all day long. Which is not to say it can’t happen: “While most men who require a blood transfusion aren’t in a situation where they’re thinking about or engaging in sex, even hospitalized patients who are on life support may be able to get neurogenic ‘nocturnal’ erections during REM sleep,” he says.

Of course, now that we’ve gone this deep, we have to answer one last question: How much of that blood actually ends up in boners? Let’s do some crude math. The average blood donation is about one pint, and the average boner requires about 130 milliliters of blood to remain stiff. Since there are about 473 milliliters in a pint, when the recipient has a boner, assuming all the blood in the boner came from your donation, about 27 percent of your donated blood would be in his boner.

Now, red blood cells only survive in the body for about 120 days, which, assuming your donated blood was fresh, translates to how long it could continue flowing throughout the recipient’s body. Furthermore, blood circulates throughout the entire vascular system, dong included, in only 20-ish seconds, which means your donated blood could theoretically flow through the recipient’s dick, flaccid or otherwise, 518,400 times during its 120-day lifespan.

Let’s take this one step further: Since the average man experiences 11 boners a day (and several more at night, but for the sake of this math, let’s stick with 11), assuming your donated blood goes to his dick every time he has a boner, it could end up in that boner about 1,320 times during its 120-day stint in his body.

All of which brings up back to where we started: Donating blood is a noble and selfless act — one that can save lives, boners and the female orgasm. And if that’s not something we can all get behind, I don’t know what is.