The Best Carb to Hold Your Meat, Ranked by Healthiness

Oh, and I guess lettuce wrap, too

I might as well get this out of the way now and declare my fondness for meat in virtually all of its forms. I feel similarly about virtually all of the delectable holsters (buns, bagels, tortillas, etc.) that allow me to confidently transfer my tasty meat treats into my mouth without making a mess. However, even if these contrivances for meat conveyance have flavor profiles that very much add to the proceedings, not all of them are equally beneficial to my health.

Fortunately for myself and everyone else, I have relatively easy access to highly intelligent people who know a thing or two about nutrition. Teisha Douglass (my better half) and Sarah Gregory are both clinical pediatric dietitians at Duke University Hospital, and Sarah’s better half, Nick Gregory, is the coach program manager at Noom, the subscription-based app for tracking the food intake and exercise habits of its clients.

With expert guidance from my esteemed panel of nutrition specialists, I was able to get these assorted meat holsters ranked by donut-level unhealthiness to so healthy it’s practically like eating a salad. 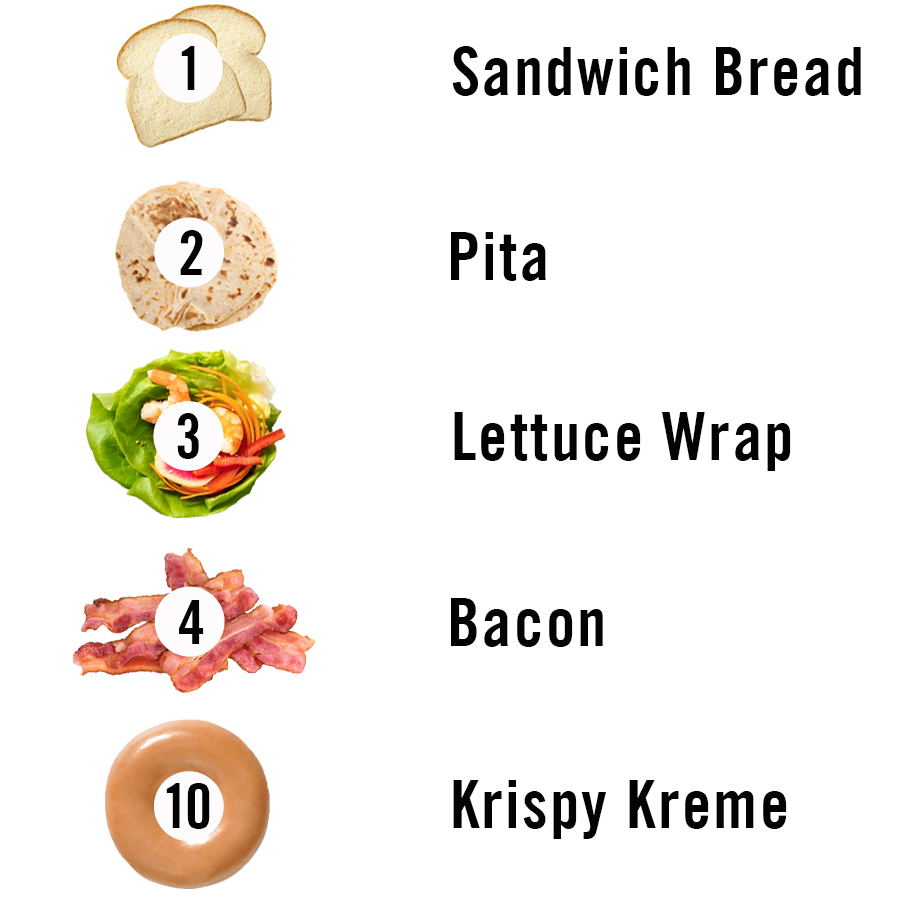 Sarah: This isn’t really a common thing. It’s a very specific Southern, North Carolina State Fair sort of a thing. In terms of your mental health, you feel great before you eat it and while you’re eating it, but definitely not afterwards.

Nick: It’s a standard Krispy Kreme donut cut in half, or sometimes two donuts with the fillings in between them. There’s no vitamin content to speak of. It’s just fried bread with sugar on it.

Teisha: I feel like you don’t really put healthy toppings on a Krispy Kreme donut either — that defeats the entire purpose. You also have to figure vegetables would taste terrible on it. It might only taste good with a sausage patty on it, like a breakfast sandwich.

Sarah: There’s a reason it’s basically only a state fair food item in one region of the country.

Ian: So the bagel we’re looking at from Einstein Bros. has 270 calories and 540 milligrams of sodium.

Nick: Bagels are pretty high in calories in general, and that’s a lot of sodium. It’s way more than a lot of other bread-type items.

Teisha: There’s also a hole in the middle, so that limits the bagel in terms of what toppings can reliably fit inside without slipping out.

Nick: It also has a larger serving size, and most people eat the entire bagel in one sitting.

Ian: So apparently, these are actually Portuguese sweet bread, and the full-sized version has 207 calories and 229 milligrams of sodium.

Teisha: But I feel like that’s part of the problem — you might want to use a salty meat to offset the sweetness of the roll.

Nick: This is going to be very low on the list. It’s high-calorie, and it has no micronutrients in it.

Teisha: And when you have the actual small Hawaiian Roll, don’t you need to eat like two or three to feel full?

Nick: True, but you’re still probably going to eat more than one of these at a time in order to feel full.

Teisha: Are we assuming this is a flour tortilla?

Nick: Yeah, a flour tortilla like what you would use for a burrito. The flour is higher in calories, and it’s also likely to be enriched like bread.

Ian: A 12-inch flour tortilla has 48 grams of carbohydrates, 290 calories and 570 milligrams of sodium.

Teisha: I’ve got to say, I rarely feel full after eating tortillas because they’re low-volume despite being relatively high in calories.

Sarah: What if we factor in something like a spinach tortilla?

Nick: That’s just a gimmick to make you feel like you’re being healthy. I totally fall for it too, but it’s really just changing the color of the tortilla without making it any healthier.

Ian: It looks like a standard hamburger bun has about 140 calories, 20 grams of carbohydrates and 210 milligrams of sodium. It has some vitamin content, but those values are lower than in sandwich bread.

Nick: I feel like this sounds very similar to bread in terms of what it’s all made of, but the flour in hamburger and hot dog buns tends to be more refined.

Teisha: If you had a whole wheat option, that would be less likely to be bleached, so it would have a higher micronutrient content than white bread.

Sarah: They have white breads that are actually whole wheat so that the color can basically fool picky eaters who don’t want brown bread.

Teisha: Yeah. Even when it says “whole grain” on the label, that doesn’t mean it’s really whole grain; you have to check the quantity in the ingredients.

Ian: What’s the major difference that would make? More fiber in the product?

Ian: Are we saying more fiber is always good?

Ian: Where are we ranking flatbread compared to pita bread?

Ian: This says flatbread is 234 calories, has 456 milligrams of sodium, has 47 grams of carbohydrates and has negligible vitamin content.

Teisha: That’s pretty low calorie, but we shouldn’t go assuming flat bread is healthier than certain other options. A lot of fast-food places offer flatbread that’s actually less healthy than the other sandwich-type bread options on the menu.

Nick: This would be a favorite option of someone on the keto diet.

Teisha: I would never recommend the keto diet for someone long-term. It’s an all-or-nothing scenario that causes people to make unwise nutrition decisions.

Sarah: Yeah. People with certain dietary restrictions should never use this.

Ian: Okay, but is bacon as a meat holster inherently bad?

Nick: No. You’re getting some protein out of it. If your bacon grid is three or four strips, maybe you’re getting anywhere from 10 to 20 grams of protein. If someone has diabetes, it can be a solid option.

Sarah: This is going to be crunchy and satisfying, and it’s going to save calories.

Teisha: True, but it also doesn’t have a lot of fiber and is basically low in micronutrient content.

Ian: Just because something is low in calories, that doesn’t automatically make it the best option, right?

Nick: Right. It’s not going to rank as highly as a bread made with sprouted whole grain, which has far more vitamin content and fiber in it.

Ian: Yeah. Unless it’s butter lettuce that’s really high in vitamin A, the lettuce isn’t going to have any vitamin content to speak of. It’s purely the calorie-free stand-in for meat.

Ian: The average pita only has about 165 calories to it and about 320 milligrams of sodium.

Teisha: That’s a good thing in this case, because pitas are a ready-made portion, so most people don’t eat more than one.

Nick: It has a lot of micronutrient content, like manganese and thiamine, that aren’t found in some of the other items. It also contains the contents neatly, whether they’re wrapped around the fillings or the fillings are stuffed inside of the pita.

Teisha: Right. Pitas limit the contents, whereas some of the other products we’re considering allow the ingredients to spill out, basically inviting you to fit even more inside of them.

Ian: On average, sandwich bread is 70 calories per slice (140 calories for the full sandwich), has 130 milligrams of sodium and has small but significant amounts of several vitamins.

Sarah: Bread is usually fortified and enriched, so it allows many people to have greater access to vitamin content even if they don’t have access to other food items.

Nick: Yeah, most breads are fortified, usually with thiamine.

Teisha: And it usually has enough fiber to help you feel full.

Ian: Looking at the nutrition contents, bread is basically looking like a low-level, relatively low-calorie multivitamin.

Nick: Right. It’s reliable, it’s inexpensive, it has a reasonable number of calories, it has fiber and just two slices is usually enough to leave you satisfied.

Ian Douglass is a volunteer firefighter, lackadaisical Concept2 rower and SkiErger and is the worst masters swimming All-American in recorded history. He also helps professional wrestlers publish their autobiographies, assists businesspeople with the writing of coherent thoughts and has overhyped degrees from Michigan and Northwestern.