Don’t Blow It: How to Make the Most Out of Your Tiny Bag of Coke

Ten small bumps, or one monster line? That is the question.

It’s closing in on midnight. You’re 12 — or maybe 13 — beers deep. You’ve asked everyone in the bar if they “know a guy.” Finally, your persistence pays off, and you nab a plump bag of blow.

You’re tempted to dump it all out on the nearest hard surface and rack a line big enough to bring Fleetwood Mac back together. But there’s a better way if you want to make your coke last. Below, we’ve mapped out everything you need to know before going on the best ski trip of your life, such as whether you should put it into your ass and when to go back for more.

How do I do coke?

The most common way is to chop it into a powder — you can use a razor blade, a credit card or even that Trader Joe’s gift card your mom got you — then snort it. Ideally, you’ll use a short, clean straw, but you can use a rolled dollar bill in a pinch. You can also shove a key (or your fingernail) straight into the bag and use it as a spoon to do a “key bump,” although that’s definitely not the most sanitary option.

If you’re looking for something cleaner and more environmentally-friendly, there are many reusable, washable cocaine-snorting accessories on none other than Amazon, which may be a good investment if you’re a regular user.

Some less common (and more dangerous) ways to do coke involve swallowing it in the form of a capsule, smoking it, injecting it, and of course, pulling a Wolf of Wall Street and having someone blow it straight into your asshole. But assuming you’re a somewhat inexperienced user, I’d stick to snorting.

How much should I do?

“Start with small bumps 15 minutes apart,” says Rachel Clark of DanceSafe, a public health organization promoting safety among nightlife and electronic music communities. “Ideally, you should weigh your bumps or lines with a milligram scale to get an idea of what each dose does for you. Increase or decrease your dose a little bit with each bump or small line until you hit the sweet spot.”

If you’re a coke noob or just trying to get a sense of your new batch, Clark suggests starting with 15 to 20 milligrams, which is a tiny amount — just enough to fit on the very edge of a small coke spoon. “Keep in mind that your tolerance will increase throughout the night, so a 60-milligram line at the end of one sesh may be way too much to start out with next time,” she continues. “Starting off with a big dose is a recipe for being uncomfortably or dangerously stimulated, especially since there’s so much variety between baggies of cocaine and even the mixture of active to inactive ingredients in each bump.”

What other things are in coke?

Much like many illegal and therefore unregulated drugs, cocaine can be laced with all sorts of nasty stuff. In 2014, the English government stated that 80 percent of the cocaine it seized contained levamisole, a deworming drug used to treat livestock. Anesthetics, like benzocaine, lidocaine and procaine, are also commonly added to coke to enhance its numbing effects. And perhaps worst of all, coke is often laden with the deadly synthetic opioid fentanyl. “It was involved in 70 percent of last year’s cocaine overdose deaths,” says Lawrence Weinstein, chief medical officer of the American Addiction Centers.

How do I know my blow is legit?

You can’t really tell from the effects alone, because as one skier on r/Cocaine tells me, impure cocaine cut with other drugs, like those of the methyl group, can prolong your buzz, perhaps convincing you that you’ve got the good stuff. That’s not necessarily correct, though, because you wanted coke, not methyl-coke, and while extra drugs may make it seem as though you got more bang for your buck, they really just add more risks to your experience.

You also can’t tell by simply looking at your coke, despite what some cocaine connoisseurs might say. “Since a fatal dose of fentanyl can be as small as a grain of sand, it’s absolutely impossible to detect with the naked eye,” says Clark.

What do you do, then? The safest option is to employ a fentanyl test strip (you can order a 10-pack online for only $20). “You’ll have to dissolve the whole sample in water, but don’t worry, you can evaporate the water back out in hours or days (depending on the method you use) to get your powder back,” Clark explains.

To do this, you can pour the liquid onto a glass dish and leave it on the counter for a few days. You can also blow-dry the coke water for slightly faster results. Or if you’re really hankering, Clark says you can “stick it in the oven on 200 with the door ajar until there’s a thin layer of what looks like ice on the bottom of the dish. Then, you just scrape it up with a razor blade, a card or something similar, crush it finely, and bam: Powder. This has the added bonus of potentially releasing trapped organic impurities, making your stash a little bit cleaner — maybe.”

Still, even if you take the time to do all that, Weinstein warns that there’s “no such thing as ‘safe’ cocaine use.”

How long does cocaine last?

That depends on how you do it. “After taking the drug orally, its effects are felt typically within 10 minutes,” says Weinstein. “Taking the drug intranasally takes a bit more time than either intravenous or inhaled [via smoking] methods of administration, but it doesn’t take quite as long as the oral route in reaching the bloodstream and producing psychoactive effects.” Therefore, snorting coke should have you chatting up everyone in the room within five minutes.

If you inject or smoke blow, on the other hand, you’ll feel high almost immediately.

How does cocaine make you feel?

Cocky, confident and ready to talk with everyone in the room. It can also make you feel like you’re going to shit your pants.

Does it feel different depending on how I do it?

For sure. Injecting coke results in a shorter, more powerful high. Snorting and swallowing it, on the other hand, prompt a slower, more even-keeled buzz. Lastly, smoking it leads to something somewhere in the middle. You can get a good sense of the peaks and tapering effects of cocaine by checking out this graph provided to me by Judy Grisel, professor of psychology and neuroscience at Bucknell University: 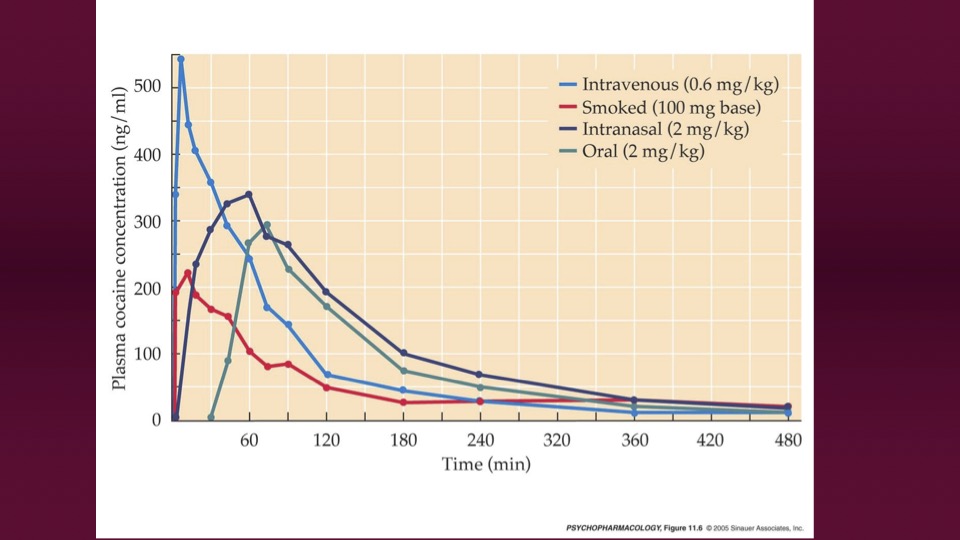 What about this “woke coke” I’ve been hearing about?

Great as that sounds, it’s almost entirely bullshit. Sure, the occasional dealer can claim that their coke is ethically sourced from a friendly group of cartel-free Colombian ranchers, but that’s very, very, very rarely the case.

How long does cocaine stay in your system?

It typically only shows up on a blood, saliva or urine test for up to three days, but it can be detected by a hair test for months or even years.

Can I go to the bathroom now?