I Figured Out How Far I Scrolled in a Year, and Now I Hate Myself

You can use data science to calculate the distance traveled by your iPhone thumb. It’s more mileage than most of us can run

I started 2019 with a small list of resolutions to try improve my life: Wake up earlier (failed), meet my deadlines (failed) and give up coffee (yep, you guessed it: failed). But there was one resolution I ended up not just fulfilling, but exceeding: I completed a half-marathon, and then some. I did no training. I adhered to no special diet. And I bought no thermowear for endurance runs. In fact, I completed most of my marathon while lying in bed or sitting on the toilet.

While I’m still in denial about my larger social media problem, I will admit to taking anywhere between five to 10 “sporadic’” scrolling sessions an hour. Sure, they only last around 30 to 60 seconds at a time, but when they’re all accumulated, it probably amounts to more mileage per day than I drive in a week.

There hasn’t been any official or deeply mathematical research on “scroll depth,” the term app developers use when talking about scrolling distance. But some researchers have estimated that an average person will have scrolled the equivalent height of the Burj Khalifa (i.e., the tallest building in the world) in a week, and Mount Everest in a year. Meanwhile, in 2018, the technology agency Gravity Road estimated that if someone were to scroll from the top to the bottom of the Mail Online on an iPhone 8, they’d have covered 16 feet — that’s three Seth Greens.

These measurements tend to be based on the “average” amount of social media use per person. Though there’s no consensus on that figure, according to Yahoo!, it’s around two hours, 57 minutes per day. This estimate obviously comes with a lot of assumptions: that the person is scrolling on just one device, and that their scrolling time is linked to their recreational use of social media platforms. Basically, if you happen to be like me — someone who spends their work and leisure time online — that distance is likely to be far, far longer.

But how far that is, exactly, is difficult to determine. Partly, that’s because social media platforms are reluctant to pass on valuable user data. More crucially, however, there are a lot of unexpected variables that impact scrolling — for example, whether your phone runs on iOS or Android, and how big your phone is. As Zubair Idrees, a Java developer in Dubai, tells me, “The strength of a scroll impacts a scroll rate. If you have a strong thumb, one scroll will cover more distance than someone who doesn’t have as strong a thumb, or who uses a different finger.” In other words, even if two people spend the same amount of time scrolling on Twitter, the physical distance they cover may be vastly different. And that doesn’t even factor in when and where they choose to stop, or whether the speed at which they scroll stays consistent.

This could, though, be about to change, as many internet researchers expect scrolling patterns and behaviors to become a favored metric among publishers and social media platforms in the 2020s. “Scrolling behavior could be interesting if we can infer appropriate understanding of it, rather than just assuming,” says Brit Davidson, a research associate in cybersecurity at the University of Bristol. That said, she believes it only scratches the surface. “I’m more interested in the way people use devices and how that’s unique to them,” she explains, which she thinks gets more at their intentions in using a particular app or program. 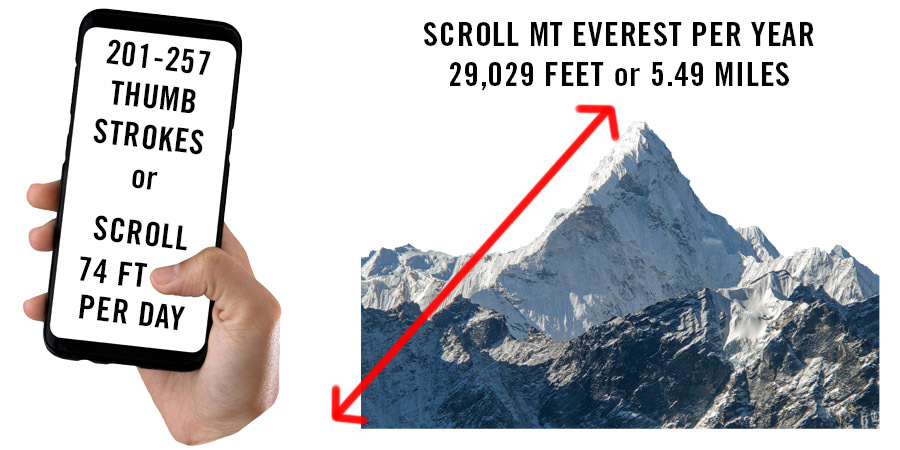 To get my own scroll depth for 2019, Idrees told me that any accurate measurement would probably require me to jailbreak my iPhone, write some code and let it run in the background for at least 48 hours — something I didn’t have the savvy to do. Instead, I relied on the number-crunching of Leo Qin, an L.A.-based data scientist.

On his blog, Qin estimates that an average person will likely perform between 201 to 257 thumb strokes on their smartphone a day, based on the aforementioned Yahoo! data and the number of words the average college student reads on a screen per minute. According to Qin’s calculations, on an iPhone with a six-inch screen, the average person is likely to cover 890 inches of text daily — or 74 feet. That probably doesn’t seem like a lot, but when you extrapolate it out, Qin estimates that a normal person will have traveled at least five miles a year with their thumbs.

With that — and if my iPhone screen-time data is correct — my yearly scrolling time is more than triple that of average person. So, at the very least, I covered around 20 miles in 2019. That’s just under four Everests, or eight lengths of the Hollywood Walk of Fame. Perhaps not quite a marathon — but much closer to the goal than my vow to wake up earlier.