How Did the Polo Shirt Become So Separated From Polo the Sport?

Weirdly enough, you can blame it all on tennis

For better or worse, there is no more iconic piece of menswear than the polo shirt. It’s an item of clothing that exudes the same waft of aspirational energy as a yacht commercial, which makes sense, considering the original shirt was, of course, designed for polo — a sport that has historically been reserved for people who have enough money to own a horse.

The original uniform for polo (the sport), according to Heddels.com, “included a long-sleeved cotton shirt, similar to a dress shirt.” Noticing that polo players were using pins or buttons to keep their collars from flapping around in the wind, John E. Brooks, of Brooks Brothers, “introduced button-down collars onto all of his dress shirts, a feature that has become commonplace in modern-day shirting,” per the same report.

Strangely, however, though the name “polo shirt” would stick, it’s the shirt’s application in the sport of tennis that would ultimately lead to the design for which it’s known today. “It was also referred to as a tennis shirt — piqué knit cotton, short-sleeved, unstarched collar, a placket opening with buttons at the neck, and a ‘tennis tail’ to help keep the shirt tucked in,” reports Smithsonian Magazine. In fact, the modern-day polo shirt was designed in 1933 by Jean René Lacoste — nicknamed “le Crocodile,” naturally — who wanted to improve his ability to move around on the tennis court.

The split between the identity of polo and the polo shirt itself, then, had begun as early as 1933. Once in the U.S., the polo shirt branded as Izod Lacoste was seen on “JFK, President Eisenhower and Bing Crosby, and from there, the shirts caught on, and became easy to find in department stores,” per Smithsonian Magazine. Naturally, Ivy-League folks who didn’t play polo, but who wanted to feel like they exuded the same douche-y arrogance of someone who played a sport from atop a horse amongst people who own horses, adopted the President’s shirt of choice as their go-to uniform.

By the 1960s, advancements in technology had led to a rise in polyester polo shirts that were more durable than the once-popular knitted pique cotton. But the most notable development came in 1972, when Ralph Lauren — then a young designer famous for his ties — decided to produce his own line of pique cotton shirts, based on the original Lacoste tennis shirts. “Coming in 24 colors, Polo Ralph Lauren marketed the shirt with the tagline ‘it gets better with age,’” reports Heddels.com.

As for why a shirt designed by a tennis pro became known as the “polo shirt,” you can thank Ralph Lauren for that one. “Ralph originally chose Polo to represent his brand as he believed the sport itself was representative of the aspired class and style of his clothing,” writes VintageThreads.com. “He wanted to appeal to a premium market and exude style with a classic feel.” Knowing the richness (literally) of the world of polo, Lauren used the name to inject an aura of wealth and royalty for his still up-and-coming brand. “I couldn’t call it Basketball,” Lauren joked to Time in 1986.

All of which is to say that the polo shirt was never, in fact, a shirt historically used in polo the sport. Lauren, then, didn’t so much break the polo shirt from the sport as much as he finally brought them together. 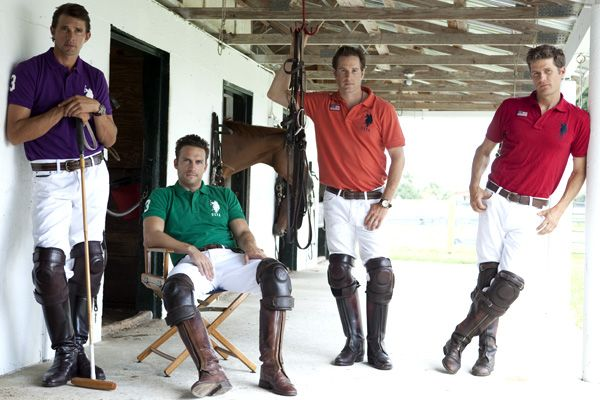