How Bad Is It to Eat Gum From a 30-Year-Old Pack of Baseball Cards?

I do this in the name of science! At least, that’s what I’m telling myself.

“What’s the worst that could happen?”

That’s the question I’m asking myself as I stare at the pale-pink petrified rectangle in front of me. I got it from a pack of Topps Teenage Mutant Ninja Turtles trading cards marked ‘1989’ on the back of the package. 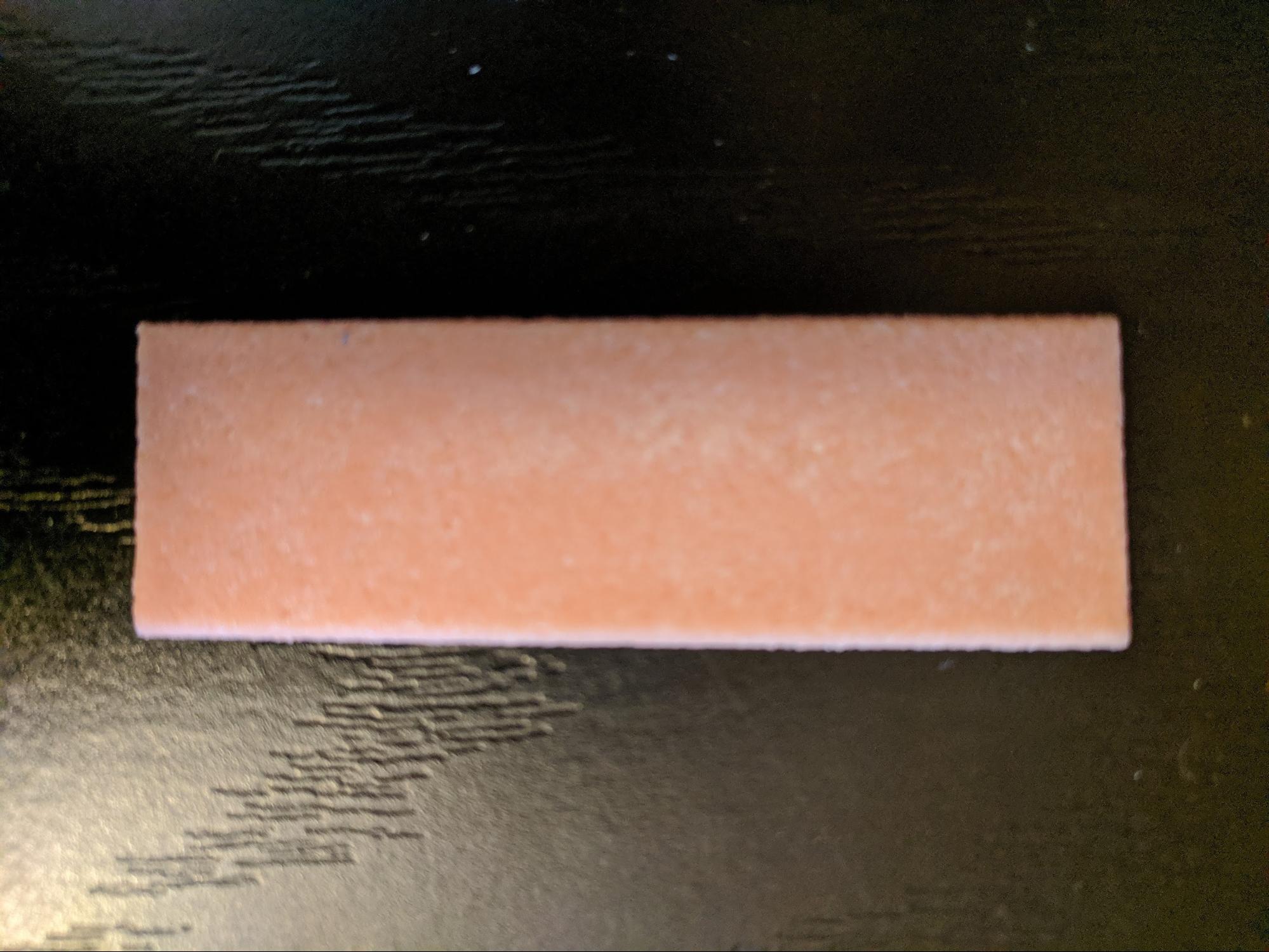 This isn’t the first time I’ve seen this gum in my adult life. I regularly scope out vintage toy stores and the like, and I’ll often pick up old trading-card packs for about a buck or so. Generally, I just take the gum out of the package — oftentimes having to un-stick it from a card it’s adhered to — and chuck it away, but I can’t deny that I’ve been tempted to eat it. 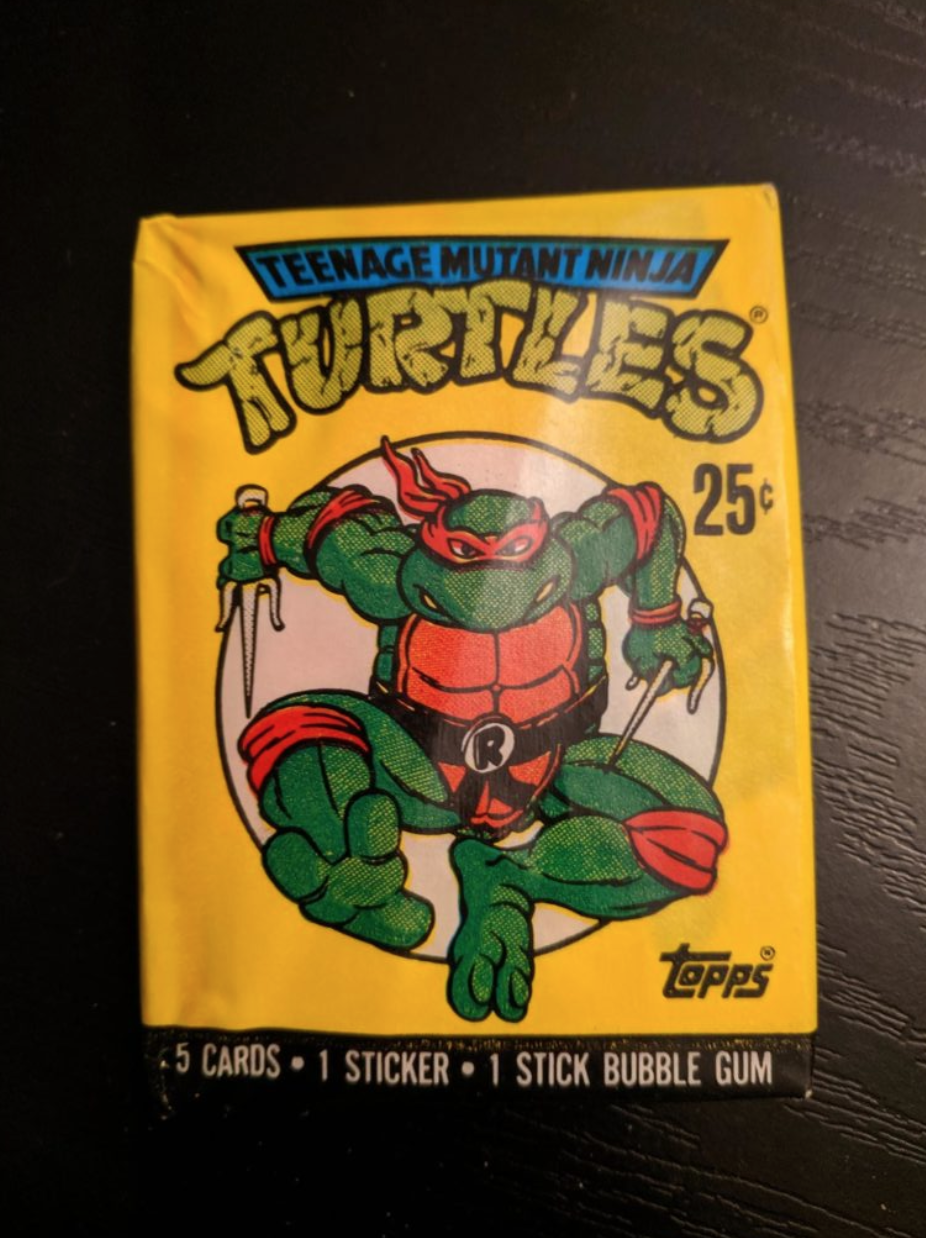 I don’t really know why. While I fondly recall Big League Chew and Bubble Tape as some of the few bright spots in my embarrassingly bad, miserable days in Little League, I have no such regard for the gum I’d find in trading card packs. While I always ate it, I remember it being hard and brittle and the flavor never lasted nearly as long as I’d hoped. It’s like that shitty Bazooka bubble gum, only not as good. But for some reason, as I open up these trading card packs as a 33-year-old man, I’m tempted.

Fuck that, I’m more than tempted. This time, I’m going for it. 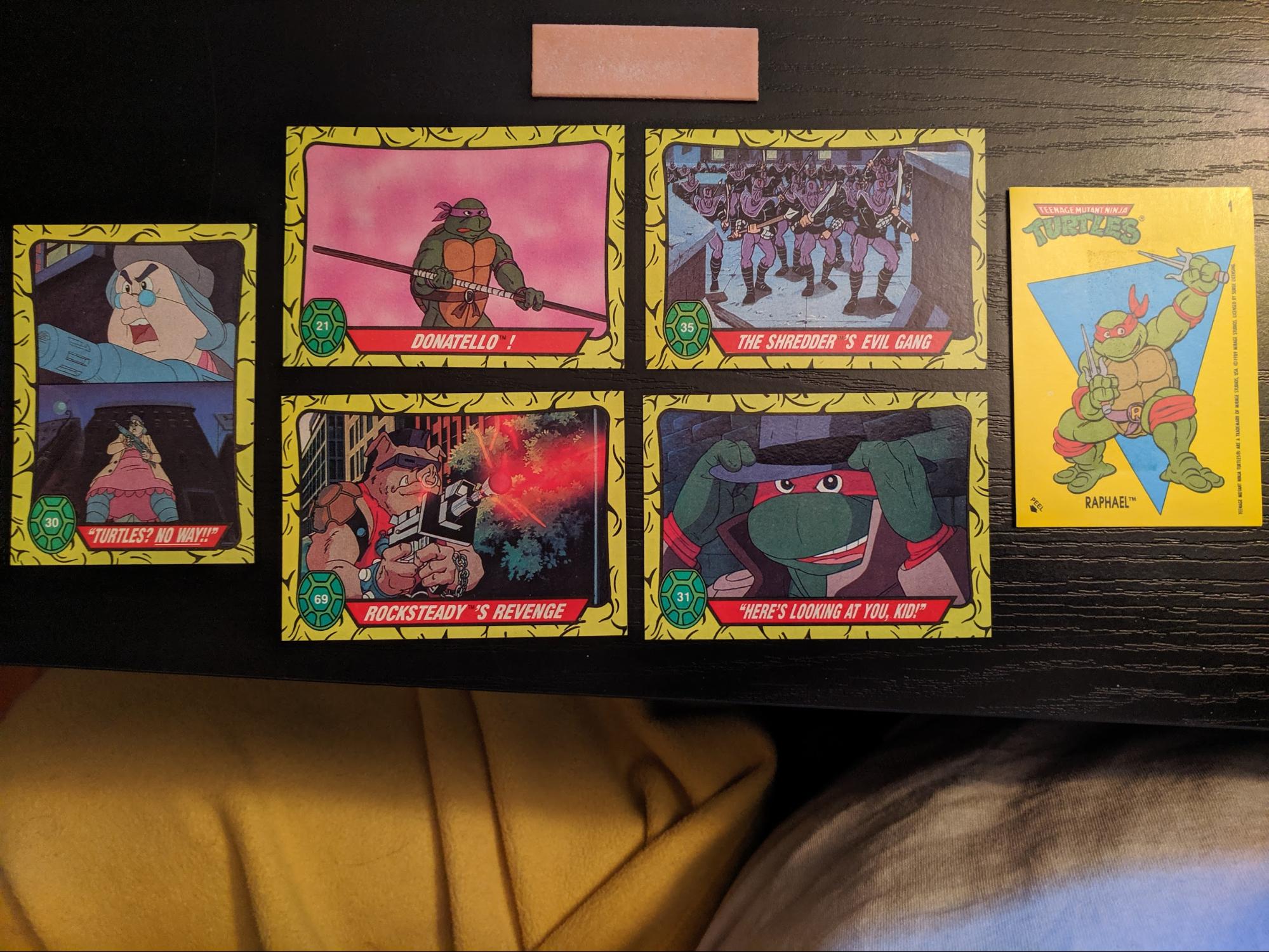 But before I eat this gum that’s nearly as old as myself, I decide to make a few phone calls. The first is to Jason “The Germ Guy” Tetro, author of The Germ Files and host of the Super Awesome Science Show podcast. As a microbiologist, Tetro has filled me in on a lot of our gross “What’s on This?” pieces in the past, so I decide to ask him, “What’s the very worst that could happen to me here?” Then I let him know the ingredients on the back of the package: dextrose, corn syrup, gum base, the suspiciously ambiguous “softeners,” natural and artificial flavors, artificial colors, and finally, something called “BHT,” which the package says is to “maintain freshness.” 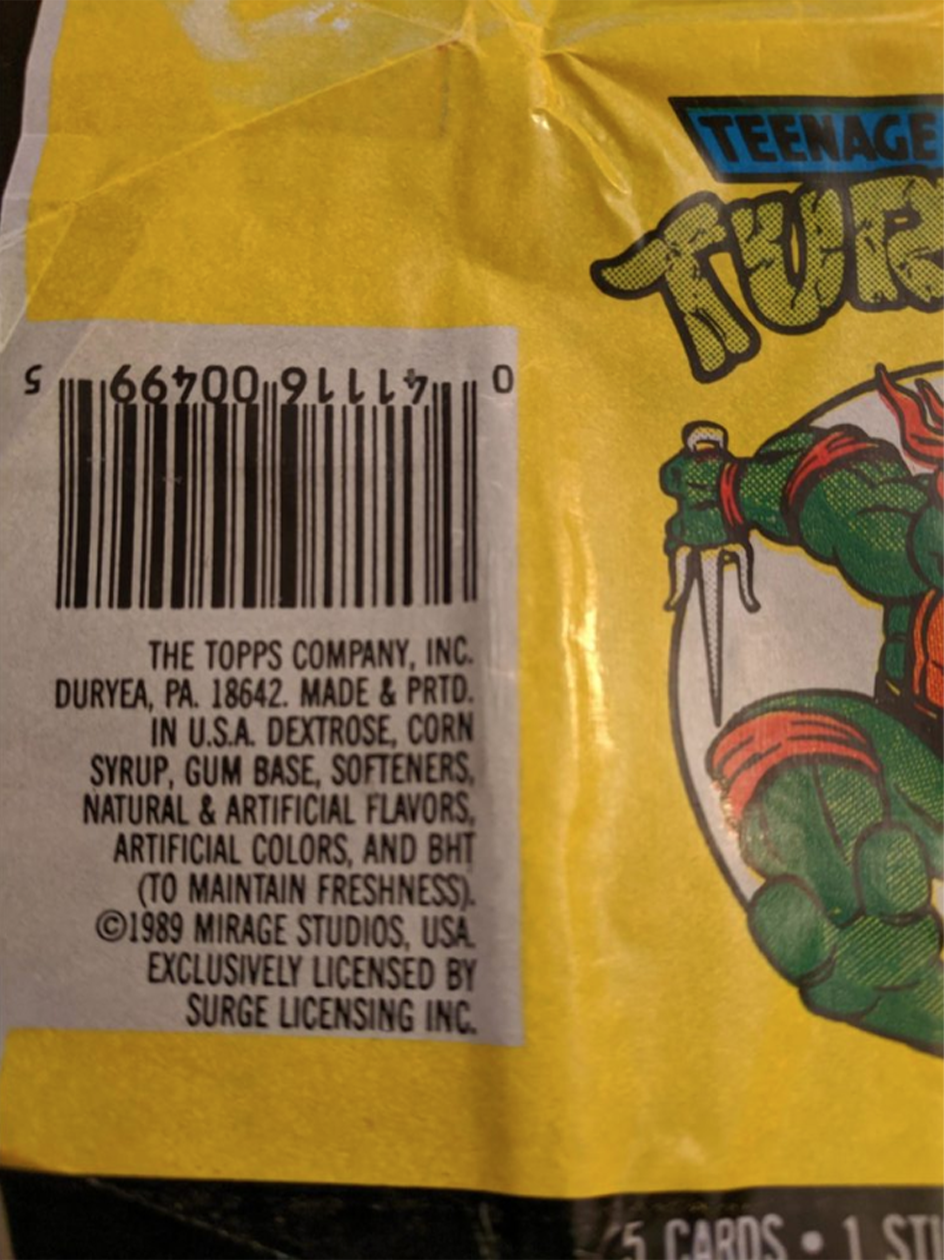 Tetro tells me, “If the package has remained in a cool and dry place, nothing will happen — although the gum may tend to taste more like a powder than a gum. This is because the ‘gum base’ usually has various oils and waxes that will dry out.”

A bit surprised, I double check: “Nothing?” Like, I don’t want it to kill me, but this seems like a surprisingly blase response.

Tetro does add that if the package were damp, “fungi and bacteria could grow, as the gum contains a fairly high amount of sugar, and if this happens, you’ll probably notice that it will look and smell very different — not pleasant at all.” And if someone decides to eat that damp old gum, Tetro says, “they may spread any living microbes into the mouth and possibly the respiratory tract, but will that make them sick? Probably not, as the amount will be so small compared to the bacterial number in your mouth. If anything, it may cause you to spit it out due to the off taste.”

Fortunately, the gum, cards and package all seem dry as a bone. While I can’t account for where it’s been these past 30 years and how many unwashed clerk hands it’s passed through, the cards are in fine shape, which suggests to me they’ve remained fairly cool and dry. But before I dig in, I have just one more call to make, this one to Gary “The Card King” Gerani, who spent decades at Topps trading cards, working on such famous lines as Planet of the Apes and the original Star Wars cards (including the one where C-3PO has a huge metal boner).

To my surprise, Gerani tells me that he, too, once gave in to the allure of the outdated gum, during his first days on the job at Topps. “It was 1972 and I didn’t have an office, so they shoved me in this storage room which had boxes of old product. The gum was often petrified and sometimes crumbled into pieces. I seem to recall, on a very perverse impulse, I did try to take a bite from a pack of cards from a pack of Partridge Family cards from 1968. So I tried a bite and it was so gross that I spit it right out.”

He also admits, “Gum from card packs was generally not the greatest anyway — even when the packs were new — which is why we stopped putting them in there. That, and the fans complained that it always ruined one of the cards thanks to the sugar sticking to the top card.”

Indeed, in 1991, Topps stopped putting packs of gum in their cards after 40 years, thanks to complaints from collectors. While many welcomed the change, this ended a longstanding tradition of gum and cards coming together (quite literally). Interestingly, baseball cards used to accompany packs of gum, not the other way around. And before that, baseball cards used to be included in packs of cigarettes, dating all the way back to the 1880s. But as tobacco companies began to get heat for marketing cigarettes to kids, gum companies decided to pick up the practice — starting in the 1930s, the gum companies Goudey and Fleer began including baseball cards with their gum.

As for Topps — which also started as a chewing gum company back in 1938 — they began selling baseball card packs with a stick of gum included in 1951.

But with them pulling the plug in 1991, this means that, paradoxically, the 1989 piece of gum from my pack of Ninja Turtles cards is one of the newest such sticks I can devour. As for Gerani, like Tetro, he assures me that it won’t kill me, so I might as well satisfy my morbid curiosity. Though, before hanging up the phone, he does offer a not-too-reassuring, “If it does kill you, don’t blame me!”

So, that settles it: I more or less have guarantees from a biochemist and a Topps legend that curiosity won’t kill this cat, so, here goes.

As I put it in my mouth, the first thing I notice is a sweet burst of flavor, not far from what it would have been 30 years ago, and for a fleeting moment, a wave of nostalgia washes over me. But just as quickly, the moment passes and that sweetness — which lasted for maybe two seconds — goes slightly sour. With a crunch, the gum breaks apart instantly, shattering like a pane of glass at the first bite down of my teeth. Then, after just a few bites — a dozen at most — the gum is gone, completely disintegrated into a powder that still has that sweet-and-sour taste. Little bits of it are scattered throughout my mouth even after swallowing a bunch of times. I need to go brush my teeth IMMEDIATELY.

Final conclusion: it was only slightly worse than when the gum was brand new. Still gross, still brittle and the flavor lasted only a little bit less than I remember it lasting.

But most importantly, it’s been about a week now, and I’m still alive.