What Does the Allure of Mocking Dead COVID Deniers Say About Us?

You can still catch the coronavirus if you’ve been vaccinated. Crucially, however, the vaccines still protect against severe disease and death if you contract the virus. According to the latest CDC data, the unvaccinated are five times more likely to be infected than those who got the shots, but 29 times as likely to be hospitalized for COVID-19. As a San Francisco emergency room doctor told HuffPost this week: “The vaccines prevent people from getting COVID sick enough to die from. I don’t know a harder, more binary outcome than dead-or-not.”

The subreddit r/HermanCainAward is focused on the dead — specifically, the dead who would still be alive had they not resisted precautions like masks, social distancing and, most of all, life-saving drugs. It’s named for Herman Cain, a CEO who ran for president in 2012 and became a supporter of Donald Trump in 2016. He died of COVID-19 last summer at the age of 74, after possibly having been exposed at a maskless, indoor Trump rally in Tulsa, Oklahoma, and became a public example of what happens when you take unnecessary risks in a pandemic. The “Herman Cain Award” is a cousin of the “Darwin Award,” given to individuals killed in accidents judged to be the result of their own stupidity — you win it by exiting the gene pool. 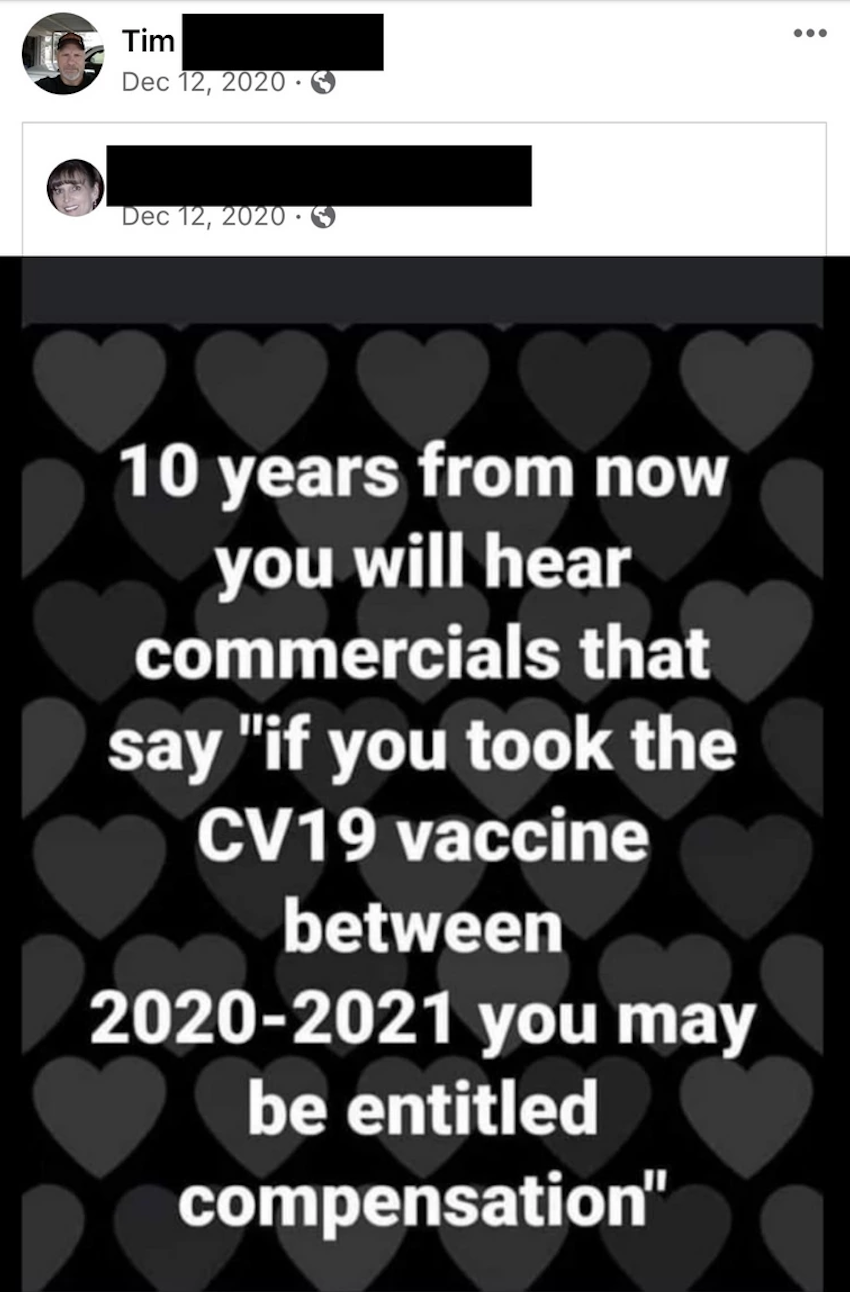 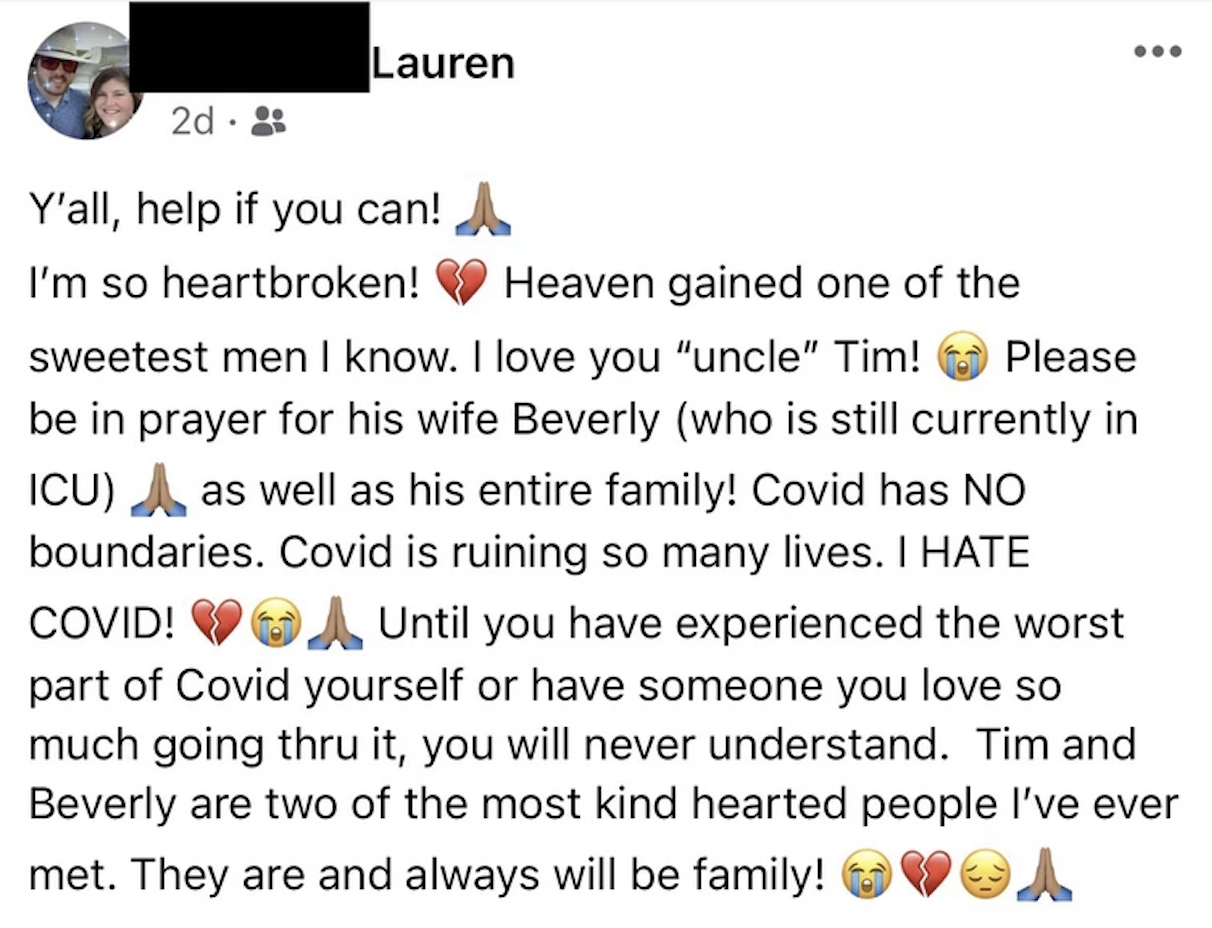 Since the spring of 2020, mainstream media has shown an appetite for stories of how the “COVID is a hoax” camp have fared once admitted to the hospital. Now, with the Delta variant sweeping the U.S. and the unvaccinated accounting for nearly all coronavirus deaths here, these deathbed narratives are all the rage. You can read about the Alabama doctor who tells terrified patients begging for the vaccine that it’s simply “too late.” Or there’s “21 heartbreaking stores of people who regret not getting a COVID-19 vaccine.” Then you have the folks who go to their graves insisting the virus isn’t real, harassing the health-care workers trying to cure them. Articles in this vein serve an audience that, consciously or not, wants to rubberneck at the site of an ongoing disaster, and see that the anti-mask, anti-lockdown, anti-vaxx hardliners are suffering for their actions.

The Herman Cain Award takes this impulse a few steps further, with contributors combing through social media to prove, again and again, that contradicting valid medical advice is no defense against a contagious pathogen. Unsurprisingly, they are not so measured in their commentary as the average journalist. My first thought when I came across the forum was: “Holy shit, the anti-vaxxers are dropping like flies.” Then I thought: “How am I meant to react to this?”

Recently, we’ve seen obituaries for three different conservative radio hosts who sowed doubt in vaccines only to succumb to COVID-19. From a strictly utilitarian point-of-view, you might argue that these deaths — of misinformation peddlers with large platforms — could save more lives, both by shocking some deniers into changing their minds and limiting the spread of dangerous falsehoods. But can I muster the same schadenfreude for a random boomer who spent months rejecting the available science on Facebook before they suffered a slow, agonizing, preventable death in the ICU?

On the one hand, you recognize these small-time anti-vaxxers as the entire problem: They are sustaining the ecosystem of junk theories, and they have certainly helped to keep the pandemic going. On the other, you regard them as victims of the more prominent skeptics, scammers and crackpots, conned out of protecting themselves. 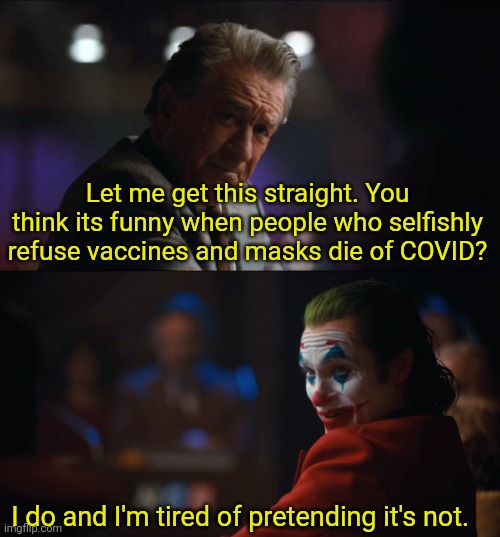 The Herman Cain Award group has some rules that partially guard against harsher mockery. Nominees must have actively propagated lies about the coronavirus, masks or the vaccines in order to qualify for a pile-on. Non-public figures need to have their names partially redacted. Memes and shitposts are discouraged, as is “rooting for” the death of a denialist who has fallen sick. Yet the frustration of the already vaccinated erupts in the form of dark, sometimes vicious humor. On a sequence of posts from an anti-vaxxer who was then diagnosed with COVID pneumonia, one user has commented, “Uh oh.. Fat, white and a goatee. Dude’s a goner.” Another joked that goatees “are a known comorbidity.” Elsewhere, a “bingo card” meme stereotypes the award nominees as “overweight” MAGA diehards from Florida. There are screenshots of GoFundMe pages for funerary expenses. And the subreddit particularly delights in calls to pray for the hospitalized and intubated, so long as that person had proudly announced their resistance to lockdowns, proven medicine or any health guidelines. 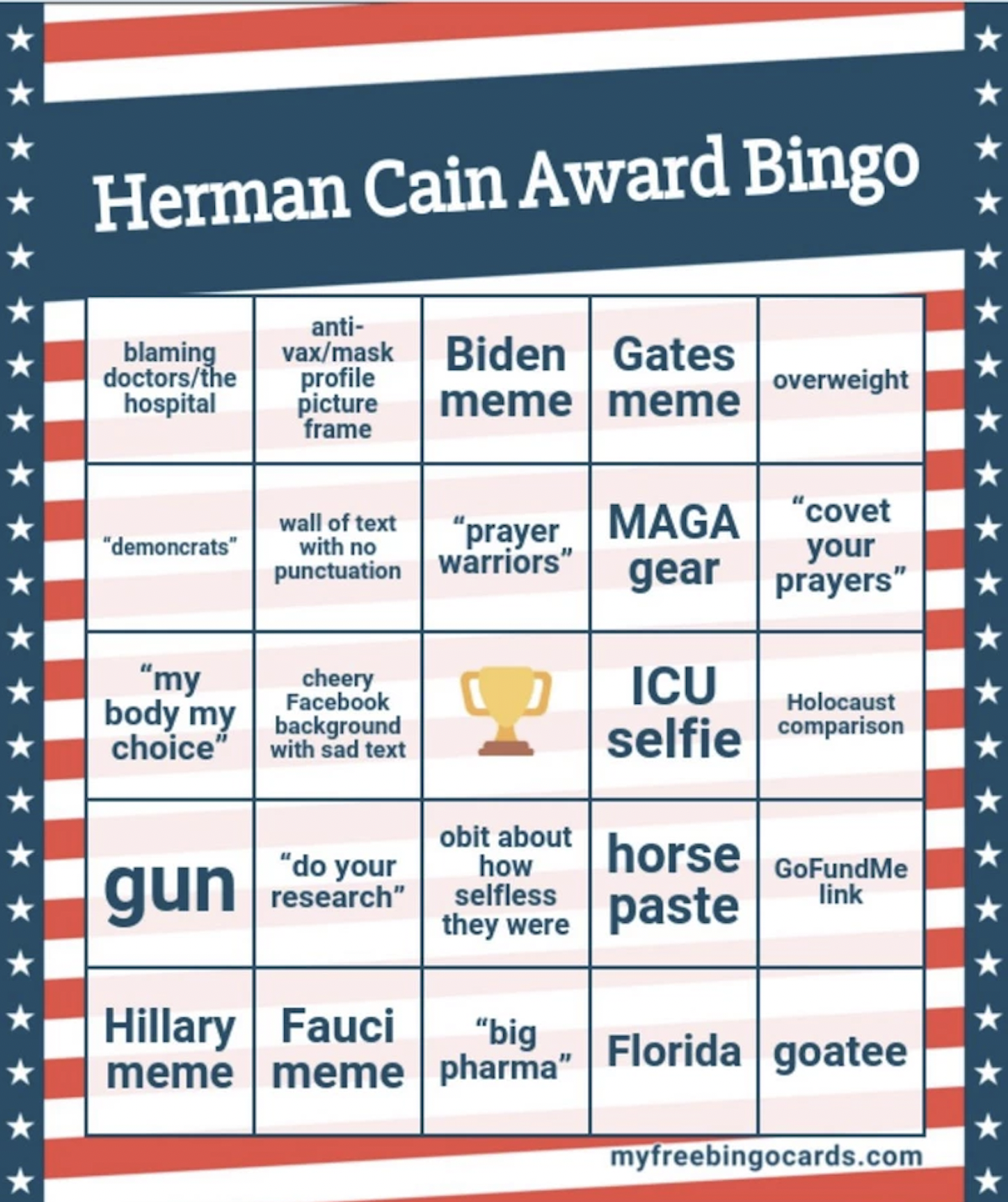 As such, the forum treads a line between righteous fury and troubling smugness. Members correctly point out that hospitals overloaded with the unvaccinated ill are turning away people with other grave conditions, and they have harsh words for the “selfish” parents who leave behind young children when they die of avoidable symptoms. But, implicitly, they also endorse the toxic, right-wing logic of “owning” your political opponents that motivates many COVID truthers — it’s just flipped around. There is little thought spared for the families or friends who might have tried to convince a vaccine holdout to get the shot, and are now mourning a stubborn loved one they couldn’t save.

On the surface level, it’s fair to say that crowing over the death toll among this demographic is bad karma, or “not a good look,” but something even more sinister lurks in the subtext, and in the increasingly reductive assumptions of exactly who is refusing the vaccine: The sense that if these people are wiped out en masse, America will be a better place. 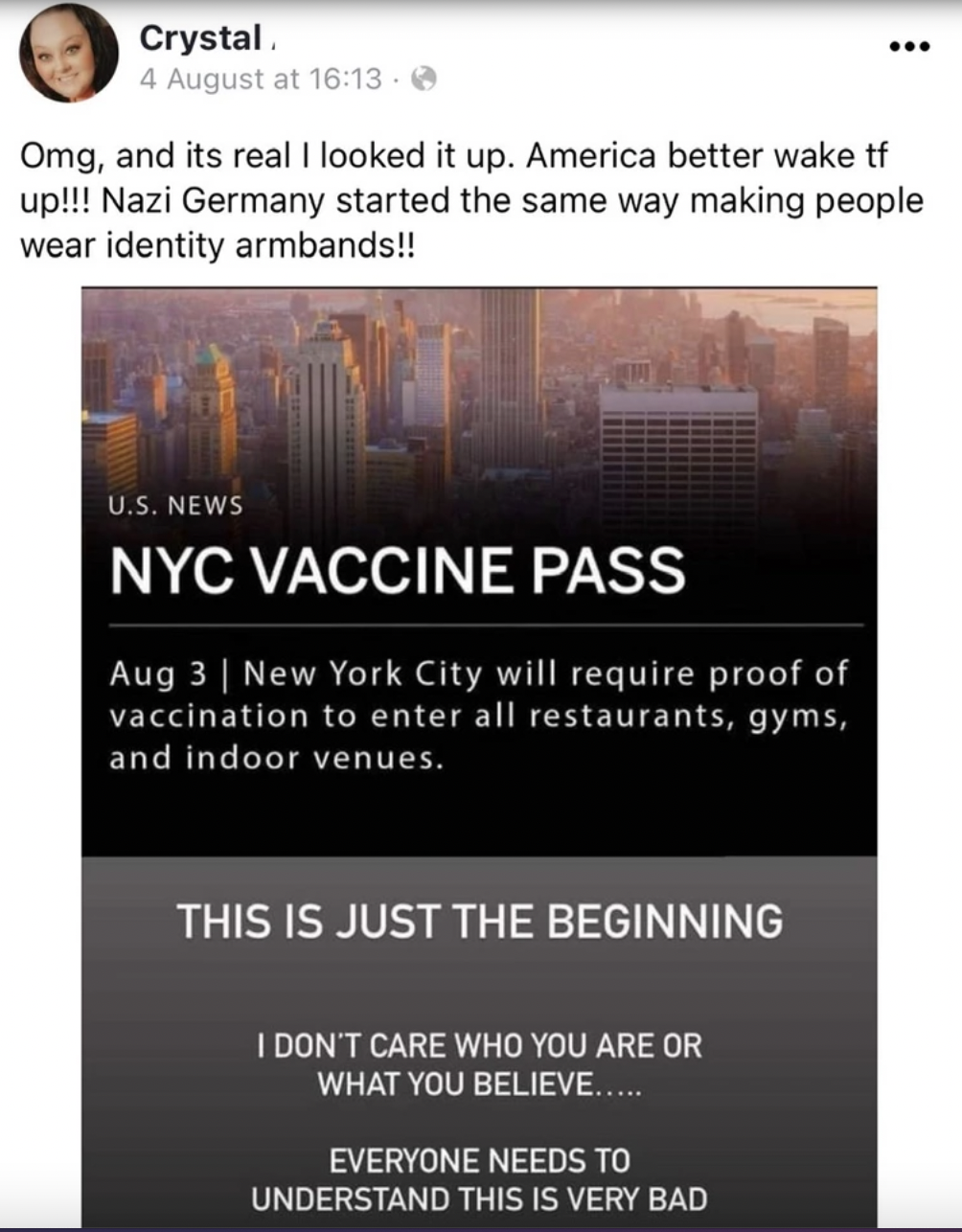 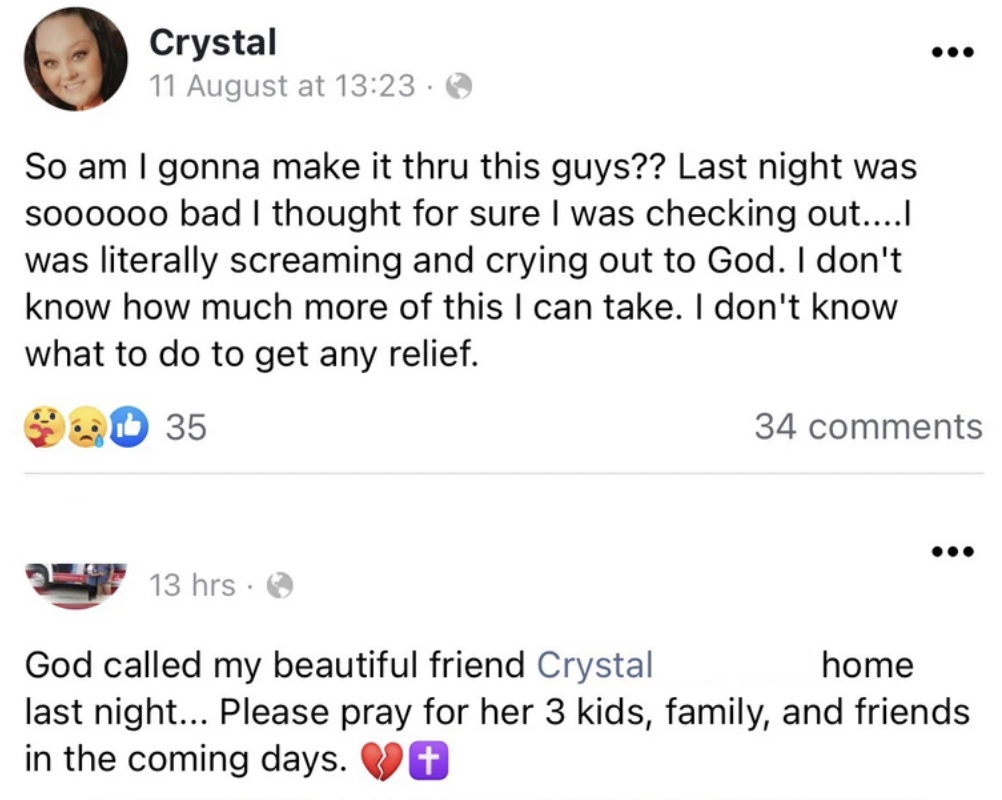 It’s understandable that COVID realists want to vent their anger. Alas, the premise of the Herman Cain Award lends itself to ugly assertions of moral superiority. No one can police what you find funny, and in my (admittedly depraved) opinion, the conspiracy-to-coffin pipeline does offer a macabre laugh or two. Gallows humor has always helped humans cope with the unthinkable. Rabid right-wingers, hardly the most empathetic in life, make it hard to feel sorry for them in death, especially when such wild arrogance has sealed their fate. What doesn’t sit right is the spectator sport we’ve fashioned to pad our own egos — this need to dunk on every single loudmouth paying the ultimate price for their sad delusions. Isn’t fatal comeuppance enough?

Besides, it’s not like they’re around to read your burns.