What’s the Healthiest Yogurt? Let’s Rank Them All and Find Out

In times like these, when the situation is bleak, many of our once-familiar luxuries are gone and our loved ones linger far out of reach, you may find yourself longing for the good old days — the days when you could crack open a few chilled Go-Gurts with the boys and allow that sweet, viscous cattle gravy to envelop your expectant tongue, sparking glee, camaraderie and an overwhelming sense of ease.

But before you go commemorating those days in quarantine by having your own personal Gurt party, you should understand that yogurts come in a wide array of forms, some much healthier than others. And if you can manage to put your health first, even in the face of adversity, you may find that everything falls into place. But what is the healthiest yogurt to eat? To lend a hand as you push forward, one meal at a time, I asked Dana Hunnes, senior dietitian at the Ronald Reagan UCLA Medical Center, to help me rank an assortment of yogurt types — from extra healthy to exceptionally disappointing.

In general, Hunnes says yogurt certainly has the capacity to be a healthy choice. “Fermented products, excluding alcohol, tend to have a lot of health benefits due to the healthy bacteria and yeasts used in the process,” she explains. Yogurt in particular can be high in protein, calcium, vitamins and especially probiotics, which help enhance your gut health. That said, as Hunnes has mentioned to me many times before, she cautions against consuming the casein (animal protein) found commonly in dairy products, including many yogurts, which is a possible tumor promoter.

Since some yogurts are clearly better than others, then, we came up with the following ranking to help you make the right decisions by choosing healthy yogurt over the bad stuff. 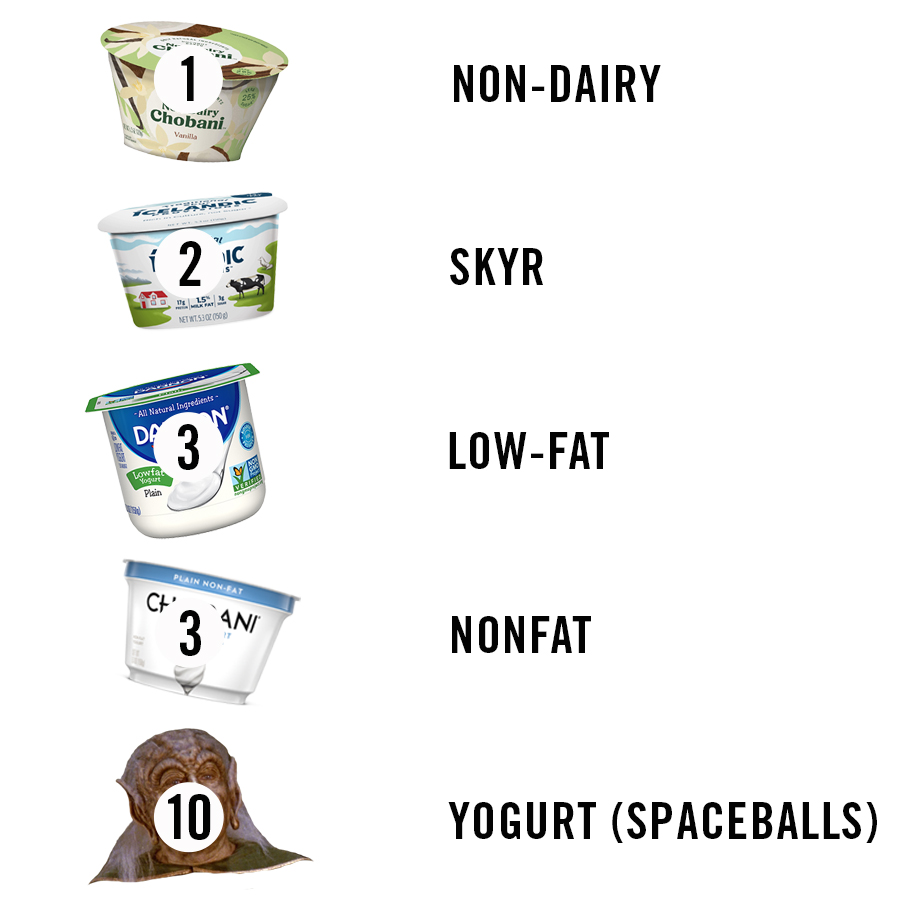 What is the Healthiest Yogurt to Eat?

1) Non-Dairy Yogurts: Generally speaking, Hunnes says non-dairy yogurts, like those made from soy, coconuts or almonds, are healthier simply due to the absence of unhealthy dairy, but with one caveat. “I prefer them to dairy yogurts,” Hunnes explains,
“but one thing you have to keep in mind with non-dairy yogurts is that they may have extra sugars in them. So, my best recommendation is to look for a brand with less sugar and similar levels of protein. There are almond-milk brands that are high in protein and low in sugar. There are cashew gurts that have no added sugar and a good amount of protein. And there are some soy yogurts. Try them all, and find one you like. These are also more environmentally friendly by not adding methane emissions (from cow farts) into the atmosphere.”

2) Skyr: Skyr is an Icelandic yogurt made from skim milk, which essentially qualifies it as a nonfat product. Hunnes says it still contains a decent dose of protein and probiotics, though, making it a relatively good choice.

3) Low-Fat and Nonfat Yogurts: Technically speaking, low-fat and nonfat yogurts should be slightly healthier than their full-fat counterparts, simply because they deliver fewer calories and potentially unhealthy fats, while providing a similar amount of protein, nutrients and probiotics. But again, yogurt companies often make up for the lack of fat by pumping their low-fat yogurts with extra sugar, so be sure to watch out for that on those labels.

4) Kefir: Kefir is a fermented milk drink — or drinkable yogurt, if you will — and while it typically has more fat than your average yogurt, it also has more protein and probiotics due to its fermentation process, which should outweigh the potential negatives from that extra fat. Still, if you simply want nutrients and probiotics, Hunnes says, “You’d be better off getting a similar non-dairy product that’s fermented, like kimchi or sourdough bread.”

5) Tzatziki: Tzatziki is a yogurt-based sauce, particularly common in Greek food. It typically consists of strained Greek yogurt, which has a reduced lactose content — not only a plus for our massive lactose intolerant population, but also a plus because it results in an overall lower sugar content. It also often contains cucumbers, herbs and olive oil, all of which help round out the healthiness of this gurt sauce.

6) Greek Yogurt: Similar to Tzatziki, Greek yogurt goes through a straining process that results in less sugar and more protein, but it also typically has more fat, which is where opting for a low-fat Greek yogurt may come in handy. “Once again, I’d recommend a non-dairy alternative, especially one with similar amounts of protein, such as soy or pea protein,” Hunnes says.

7) Australian Yogurt: Australian-style yogurt, like Noosa, is unstrained and made with whole milk. While it still contains nutrients, protein and probiotics, Hunnes again warns that the casein and added saturated fats from the whole milk used in Australian yogurt can spell trouble.

8) Frozen Yogurt: While Big Yogurt brags about their frozen stuff being low in fat, and therefore a much better choice than your average ice cream, Hunnes says, “Frozen yogurt, for the most part, is high in sugar, low in protein and not all that healthy. It’s possibly better than ice cream, but definitely not a cut above.”

9) Go-Gurt: While Go-Gurt is made with low-fat yogurt, it might as well be ice cream, considering how much sugar each serving (three small tubes) contains: 21 grams. It also boasts potassium sorbate, a preservative that may cause damage to your cells.

10) Yogurt from Spaceballs: While the flesh of Mel Brooks, the actor behind Yogurt, would be lower in calories than most other meats, cannibalism is a great way to get infected with some truly horrifying diseases. Plus, in playing Yogurt, Brooks is covered with some kind of golden makeup, which would almost certainly make you sick, earning the Yogurt character from Spaceballs the absolute last spot on our ranking.

I must admit, though, that despite everything I just wrote about the healthiest yogurts to eat, nothing can stop me from going on a Go-Gurt binge to drown my coronavirus-inspired sorrows in thick, gelatinous goodness… for the boys, you know.