Ranking Hostess Products by How (Un)Healthy They Are

Twinkies? Ho Hos? Zingers? Which is least likely to murder me from the inside?

Hostess is hailed for producing astronomically processed baked goods that may or may not qualify as food. But since Twinkies and Ding Dongs are crucial components of the American way, I made it my mission to build a healthier nation by unearthing the healthiest Hostess snack. For support, I asked physician and New York Times best-selling dietary author Cate Shanahan to help me rank Hostess products by how unhealthy they are — from genuinely unhealthy to death by Ding Dong.

This is where things get confusing: Traditionally, saturated fat, which comes mainly from meat and dairy products, have been said to increase your risk of heart disease and stroke. While this seems to be true when consuming large amounts, Shanahan — as well as many, many studies — argues that the overconsumption of polyunsaturated fatty acids may be even more of a contributor to our inflammation-driven disease epidemic in America. Therefore, in the case of Hostess products, she says choosing ones with fewer polyunsaturated fatty acids — and instead, higher quality fats more generally — should be a priority.

To be clear, polyunsaturated fatty acids — especially those that come from good sources, like fish — are crucial to our health. However, we use an abundance of refined seed oils that contain lesser versions of them in our processed foods, which results in far too much of what would otherwise be a good thing. So essentially, when dealing with processed foods, Shanahan says higher levels of saturated fat can signal the use of ingredients that are higher in quality than refined seed oils, like tallow, cocoa, coconuts or eggs.

In addition to fat content, sugar content and total calories are also obvious, but important pieces of this ranking. Besides fat, Shanahan notes that Hostess products are virtually just sugar, high-fructose corn syrup and white flour, all of which are “basically free of any naturally occurring nutrients.” So again, none of these are healthy in the slightest.

Now tag along as we rank some danger cakes. 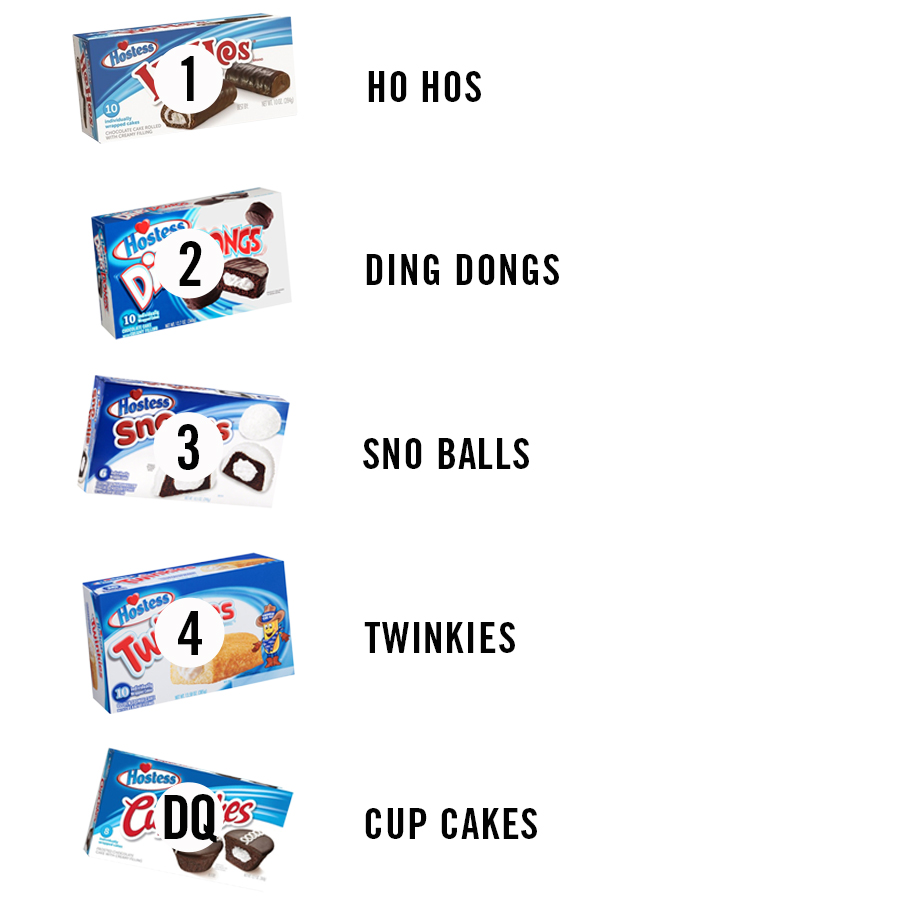 1) Ho Hos: Despite boasting a whopping 40 grams of sugar per serving, Shanahan says Ho Hos deserve first place for their saturated fat being 65 percent of their total fat content. This is still a lot of saturated fat and by no means healthy. But again, in the case of Hostess products, a higher percentage of saturated fat leaves less room for even worse fats.

3) Sno Balls: The serving size for Sno Balls is much smaller than the products listed above, which automatically brings its sugar and total fat levels down. However, we can also likely assume that most people ignore the serving size, which could lead to consuming even more sugar than you would while eating Ho Hos. The one nice thing about Sno Balls is that they contain a sprinkling of coconut, which provides at least some nutrition.

4) Twinkies: Nutritionally, Shanahan says these are similar to Sno Balls, but with a few more calories, which is why they come next.

5) Donettes: Saturated fat makes up 50 percent of the total fat in Donettes, which leaves plenty of room for worse fats through refined seed oils compared to the products listed above. They also have little in the way of redemptive ingredients.

7) Mini Muffins: Saturated fat only makes up 20 percent of these Mini Muffins. However, I have to give it to them for the addition of blueberries.

8) Zingers: These iced Twinkie-like things are super sugary, containing 39 grams per serving, and again have virtually no quality ingredients at all.

Disqualified!) CupCakes: As for CupCakes, Shanahan says, “Something is really off with the label.” Indeed, Hostess lists that each CupCake contains 26 grams of saturated fat while also listing that each one has only six grams of total fat. Stonks?

So there you go: Hope that helps, and maybe just have a piece of bread instead?