Can Spite Ever Be a Healthy Motivator?

In April of last year, a strange tweet sent shockwaves of sinister power across the internet. It featured one photo of an impassioned and erratic diary entry, explained by the following passage: “manifesting extremely negative and wicked energy toward joe biden. i have spent 12 hours secretly thinking terrible thoughts about joe biden in the hopes it will cause him grievous or fatal harm. my ‘joe biden hate manifestation journal’ is now 54 pages in length.” 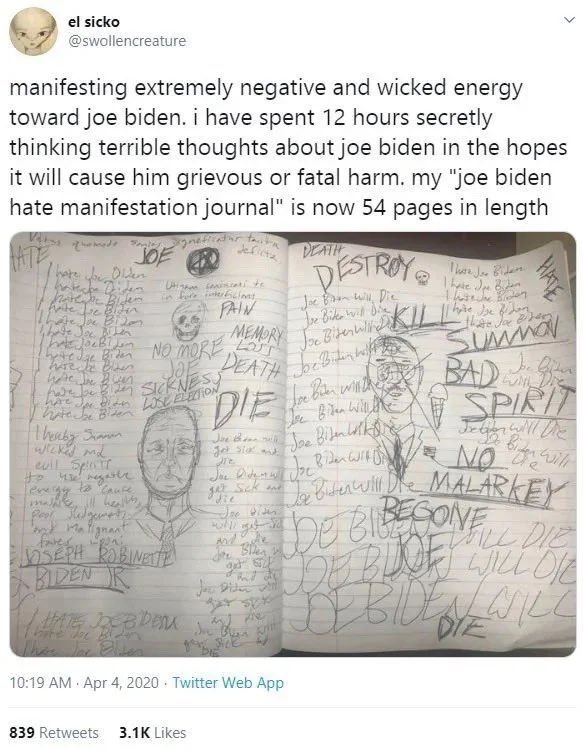 The account behind this tweet has since been suspended — we all know why — but the journal image and accompanying text are repeatedly reposted, sometimes in their original form and other times targeting different subjects, like alternative politicians and popular boy bands.

A sudden uptick in hate manifestation journals may seem harmless enough, albeit super weird (sticks and stones may break my bones, but words shall never hurt me, as they say), however, discharging angry energy in such a way can be damaging — not for the intended target, but for the author. “Journaling is a powerful practice, because it’s a space in which you can be radically honest, vulnerable and petty, if that’s your vibe, without shame or judgment,” says Gabriela Herstik, author of Inner Witch, Bewitching the Elements and Embody Your Magick. “Being able to get all your thoughts out onto paper is a potent way of transmuting energy. If you’re processing something — let’s say about someone you hate — a journal allows you space to vent in a safe way. But the key here is intention: The intention for journaling isn’t to cause harm, but to release. The idea of a hate manifestation journal is different.”

Because the intention behind a hate manifestation journal is to cause harm, rather than to relieve yourself of negative emotions, Herstik says the energy involved is both potent and volatile. “While there’s a time and place for everything, including hexing and cursing, it’s imperative that you keep in mind that which you send out has to come from your own personal energy field,” she explains. “If you’re creating this hate manifestation journal, you need to be prepared to face (1) the consequences of fucking with someone else’s free will; and (2) the idea that you’re using your own auric field to raise hateful energy and send it somewhere else. There’s a probability this will fuck you up. In what way, I can’t say, but the chances are there.”

Of course, you also need to be prepared for your manifestation to fail: Joe Biden won the presidency (and displayed a mighty throat game) in the time since this original hate manifestation journal was posted, which would seem to suggest that it was unsuccessful.

If we step away from hate manifestation journals to explore these feelings more broadly, we might also ask ourselves, can spite ever be a healthy motivator? Or rather, can hate drive us to bigger and better things if we point it in the right direction?

One of the hurdles you may run into while acting on hatred is your own brain shrinking your ability to think critically. As Richard S. Balkin, author of Practicing Forgiveness: A Path Toward Healing, explains, “What happens when we’re angry? Our brain releases neurotransmitters, including acetylcholine, which contributes to attentiveness and anger, and norepinephrine, which results in contracted blood vessels and increased heart rate. Stress hormones, such as cortisol and adrenaline, are released from our adrenal glands. This results in decreases in serotonin, another neurotransmitter that affects our mood. Sounds like a lot, right? And these are physiological responses. It’s not like we can consciously control these biological functions.”

Moreover, the risks of acting in spite tend to be greater than those associated with acting in kindness or hopefulness. “Spiteful responses to transgressions from another can cause breaches in a relationship that are difficult to heal,” Balkin says. “When acting through spite, we might want to consider the following: Do I really want to burn this bridge? Am I going to regret that I ended or irreparably harmed this relationship?”

Sometimes, of course, the answer is yes, “and that’s okay,” Balkin says, “especially when the relationship has been harmful or abusive. Such actions can be beneficial and healthy. We typically think of forgiveness as this interpersonal process, where one person forgives another over some transgression. This is a relational process, where the relationship between the victim and offender is renegotiated, and perhaps healed. But forgiveness can also be an intrapersonal process, where we make the decision to end a relationship and forgo feelings of ill will toward the person who caused harm. Waking up each morning and brooding about past transgression isn’t healthy, either physically or emotionally; rather, it’s stressful and depressing. Being able to move forward with the idea that what I wanted from this person I’m not likely to get is the essence of intrapersonal forgiveness, and can lead to healing as much as attempting to heal a breached relationship.”

“It’s not forgiveness or letting go,” says psychologist Terri Apter, author of Passing Judgment: Praise and Blame in Everyday Life, “but it’s a refusal to remain obsessed with someone else’s triumph over me, which, after all, is a sure route to further lose oneself.”

So rather than steeping your hatred and letting it control you, Balkin says, “Sometimes, simply moving on is what’s needed to be healthy.” Just think about how much more time you’d have to work on yourself and reach new heights if you weren’t still working on that 54-page hate manifestation journal.