To look at it one way, GoFundMe is the saddest website on the internet. A full third of the crowdfunding platform is devoted to paying medical costs, because the American healthcare system is a dystopian horror show. People donated a total of $400,000 to a homeless man in an alleged fraud that led to criminal charges for him and two others. And now, if you search the word “shutdown” there, you find some 10,000 results, mostly pages set up by federal employees now missing paychecks as our big, lumpy president continues to cling to the racist fantasy of a border wall.

All that would be depressing enough, but GoFundMe users also have to sell themselves as worthy of help. They post happy, heartwarming photos to showcase their humanity. Those who can’t hit the mark and get their campaign trending are shit out of luck. 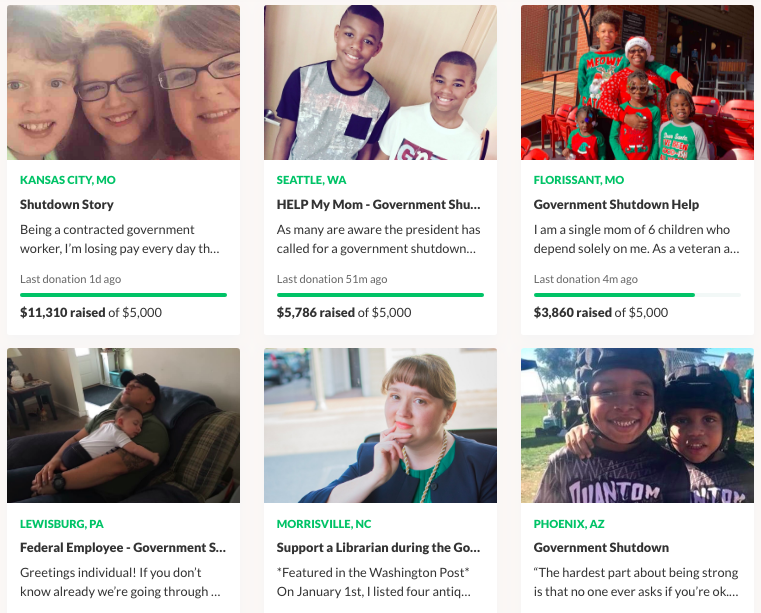 That GoFundMe has come to resemble a patchwork social safety net — against the company’s wishes, no less — is hardly a solution to the deficiencies of the state. In fact, it may exacerbate these, like when a family barely staying off the street stood to lose government food and medical benefits for accepting $15,000 through the site.

Even so, its continued popularity and prominence says something hopeful about us as a nation.

We like giving to each other, whether or not it really works. A dyed-in-the-wool conservative hostile to the very idea of universal health care — “because why should I pay for someone else’s treatment” — seems to have no problem throwing 50 bucks to a co-worker’s aunt who can’t afford chemotherapy. Hell, some Trump voters with “TAXATION IS THEFT” bumper stickers on their cars probably chipped in for a harebrained scheme to fund the wall, which drew $20 million in contributions before collapsing.

To me, all this suggests that regardless of our political affiliation, we share a collectivist spirit; we want to pool our assets to accomplish what we consider necessary.

Of course, in the absence of real oversight, corruption and grift take a significant bite.

Why might we be so giving (and gullible) in these matters while resisting increases of just a few cents on our taxes — micro-donations that could, in bulk, conceivably save a struggling school or decaying public transit networks?

Part of it is the contemporary preference for customizable, à la carte arrangement. Someone may hate the idea of funding Planned Parenthood or food stamps, while someone else objects to excessive military and defense spending. With GoFundMe, you get to choose where the money goes.

This also contributes to the demystification of public support: By putting smiling faces to specific needs, these fundraisers banish the abstraction of the government’s social programs, where people become numbers, statistics, broad demographics. It’s easier to dismiss everyone on welfare as freeloaders when you aren’t hearing their individual stories, the heartrending circumstances that have kept them hurting.

You can almost envision, then, a democratic socialism that borrows from the GoFundMe model: for example, IRS forms that break down exactly who you’re helping or what you’re buying for the country, allowing you to opt in or out on various municipal or federal projects, such that bureaucratic budgets are directly shaped by the will of the voters.

It’ll never happen, obviously, for a host of reasons, but it’s frustrating to watch the haphazard and inefficient redistribution of dollars through a third-party, for-profit business. It so clearly demonstrates our desire to pay off strangers’ hospital bills, college loans and home mortgages, all with the understanding that everyone hits a rough patch sooner or later, and the expectation that when our turn comes, we’ll get back what we gave away.

I mean, if I can crowdfund a parking ticket when my bank account is overdrawn, there is no limit to the aid and comfort we’ll give one another. Utopia is almost possible.

Maybe I’m wrong to be saddened by the struggle and pain I see on GoFundMe. Imperfect and insufficient as it is, it harnesses a compassionate social conscience you’d otherwise think was in danger of extinction. It gives us a place to try to do better. And as long as we’re still trying, we have not yielded to the zero-sum ideology of the current political moment. Instead of dividing winners from losers, we can cross the finish line together.