Goats Are All the Rage Right Now

From goat yoga, to goat parties, to goat therapy, goats are the G.O.A.T. But are we misunderstanding the world's first domestic livestock?

I’m in the midst of an hourlong yoga class at Laughing Frog Yoga in Santa Monica, during which a pair of 15-pound white baby Nigerian Dwarf goats named “Lil’bit” and “Fanny Farm Girl” — whose black spots, tiny horns and floppy ears more closely resemble stuffed animals than livestock — are headbutting, nuzzling and leaping on us while we attempt to hold a series of poses.

Sporadic laughter fills the studio every so often as Lil’bit deposits a lotta’bit on someone’s mat (or back, in the case of the unsuspecting millennial in front of me). Michelle Tritten, the owner of Hello Critter Yoga and goat handler, euphemistically refers to these droppings as “good luck blessings” while reminding us that the Mega Millions lotto has ballooned to $1.6 billion. When I ask Alex, a 30-year-old man on the mat next to me, what inspired him to attend a goat yoga class, he rolls his eyes and points to his wife. “It’s like having a therapy animal while you’re taking a yoga class,” she explains. “The idea of being able to play with goats while doing something I already enjoy seemed like a win/win. And it’s exceeded my expectations.”

That dozens of adults are shelling out 40 bucks to stretch while a goat shits on their back — and that classes are sold out through November; and that the 5, 10, 11, 13 and 15 “Best Goat Videos of All Time” have been compiled for internet consumption — suggests we’ve reached peak hircine here in Southern California. This is further evidenced by Lil Wayne inviting goats to his 36th birthday party and the trend of “party goats” — i.e., goats that are brought to parties to mingle and jump on people’s backs — being mocked during a recent episode of Saturday Night Live.

When I arrive on a recent Wednesday afternoon, the scene is similar to what I imagine chimpanzee daycare to be: Spanky bangs his head repeatedly against the bottom of a table in an attempt to remove the technicolor tape from his horns (applied for my safety and his added flare), while Pippin effortlessly parkours off a 10-foot stone wall over a fence in the backyard.

Raskin invites me to join her on an astroturfed side porch. A lifelong animal lover and child actor (co-starring alongside Ricki Lake and Johnny Depp as “Susie-Q” in John Waters’ 1990 cult-classic Cry-Baby), Raskin explains she grew up just outside of D.C. in Woodbridge, VA, and moved to Hollywood after college to pursue acting full-time. The Writers Strike in 2008 prompted a pivot to producing animated content. It blossomed into a fruitful career — she currently oversees all the 2D animation for the Neil deGrasse Tyson series Cosmos: A Spacetime Odyssey — which enabled her to purchase a house with lenient zoning laws and enough room to fulfill her dream of raising farm animals. She and her husband, an editor currently on the World Poker Tour, wanted a steady supply of fresh eggs, so they began with a small flock of baby ducks; Spanky and Pippin arrived soon after.

She started Party Goats LA in an attempt to monetize her furry friends — especially after she finished Season Three of Rick and Morty and wasn’t sure when the next paycheck would come. “Mostly, though, they brought me so much joy, and I wanted to share that with people in L.A. because I thought they’d enjoy hanging out with them as much as I did.” Thankfully, timing was on Raskin’s side. The acronym G.O.A.T — “Greatest of All Time,” now considered among the “Most Overused Terms In Hip Hop” — began popping just as the Party Goat LA website went live in 2017. “That opened up a lot of avenues for us,” Raskin says. “Suddenly, everyone wanted a goat in their music video; it’s like how flashy cars and bling used to be.”

All the while, others began evangelizing goats as wellness partners. For example, dermatologist Bobby Buka, who runs a dairy farm 90 minutes north of New York City, believes goats are ideal mindfulness tutors since their awareness doesn’t extend beyond 10 feet. (In comparison, the average dog has approximately 20 feet of awareness; humans can track 80 feet; and an eagle can spot a rabbit 2 miles away.)   But place something within snout reach of a goat, and it will investigate it thoroughly — nibbling, sniffing, rubbing — until it’s fully investigated. “As we get further and further away from lifestyles that used to sustain us wholly in smaller agrarian societies, time spent with goats can be a valuable mindfulness exercise,” Buka tells me. “Given the staggering amount of digital communication we’re engaged with, is it any wonder we’re yearning for an animal-to-animal connection, whether it’s human-to-human, human-to-alpaca or human-to-goat?”

That said, more than anything else, yoga marked the true beginning of the wellness goat craze in 2016, after videos from Lainey Morse’s original goat yoga classes in Oregon went viral. My goats can do that, Raskin thought, and so, she began training them to prove it. Goats bring a number of things to a yoga practice, she explains. First, they help with core strength because you’ve got an extra 30 pounds on your back while moving from, say, a plank position to an Upward Dog. They also test your balance by running underneath your legs while you’re holding a pose. “Mine are trained to use their front hooves to compress your back or hips to deepen the stretches,” she notes.

Soon, though, Raskin began receiving booking requests that had nothing to do with namaste. “I was just as surprised as anybody that people simply wanted to be near my goats,” she says, before explaining how she’s come to realize that there’s a very real need for it. “I think it’s in our DNA to gravitate toward them, and vice versa.” That seemed like a stretch to me, but I suppose it’s understandable given that goats were humanity’s first domestic livestock in 10,000 B.C., the start of a symbiotic relationship that’s grown ever since: We take care of them, and in return, they offer milk, meat, dung for fuel, hair for clothing, hauling capability, and most importantly, companionship.

Others, like Terrie Silverman, founder of Creative Rites Workshops & Coaching, view goats as delightful muses and consider their current popularity to be way more than a trend. “It’s in response to everything that’s going on in the world,” she tells me. “Goats provide a wonderful respite and offer well-being, wholeness and balance, all of which we desperately need right now.” Earlier this year, Los Angeles magazine dubbed Silverman a “Goat Innovator” after she created a series of first-of-their-kind “goat creativity classes,” including improv comedy and storytelling workshops using Nigerian Dwarfs Floyd and Burlap as scene partners to “nurture your creative spirit.”

Meanwhile, Raskin says her goat business has already doubled this year, with the busy holiday season yet to arrive. She, Spanky and Pippin do four events on both Saturday and Sunday on the weekend I’m with them — a goat yoga birthday party for a 13-year-old girl; a comfort hike with a women whose brother died suddenly; a prank at a USC sorority; a study break at Pepperdine University; a visit with an octogenarian about to head into hospice; and so on.

I’m invited to tag along to an event in Northridge — the adult entertainment capital of the world — for a pumpkin-carving party at the home of Bella Bathory, a self-proclaimed “Misandrist, Monster, Barbie Daddy, Scholar, Stepford Wife from Hell, Sadist, Power Dyke, Activist and Satanist.”

“There are fucking goats at this Halloween party!” exclaims a sultry woman in silver face paint upon entering the garden. I ask why she’s so excited, but she’s dumbfounded by the idiotic inquiry. “Look around,” she commands. “None of these people expected this. Then they get here, and surprise, fucking goats. Look at the joy on these people’s faces!” I ask for her name, to which she responds without missing a beat, “What do you want it to be?” It turns out to be Phoenix Dawn, “like a fucking dawn of the morning, rising.” She explains that she’s one of the top adult content creators producers and directors in the region, her most recent viral hit being, “Squirting in a Parking Lot.”

Phoenix lives in the house with Bathory and says they’re looking to buy a goat for a pet because she’s sworn off puppies after getting attacked by a pitbull when she was young. So they’ve asked Raskin to help them acquire a baby goat and counsel them on becoming compliant with local zoning laws. “They’re like dogs to the Nth degree,” Bathory explains.

I don’t have the heart to tell her she’s mistaken. 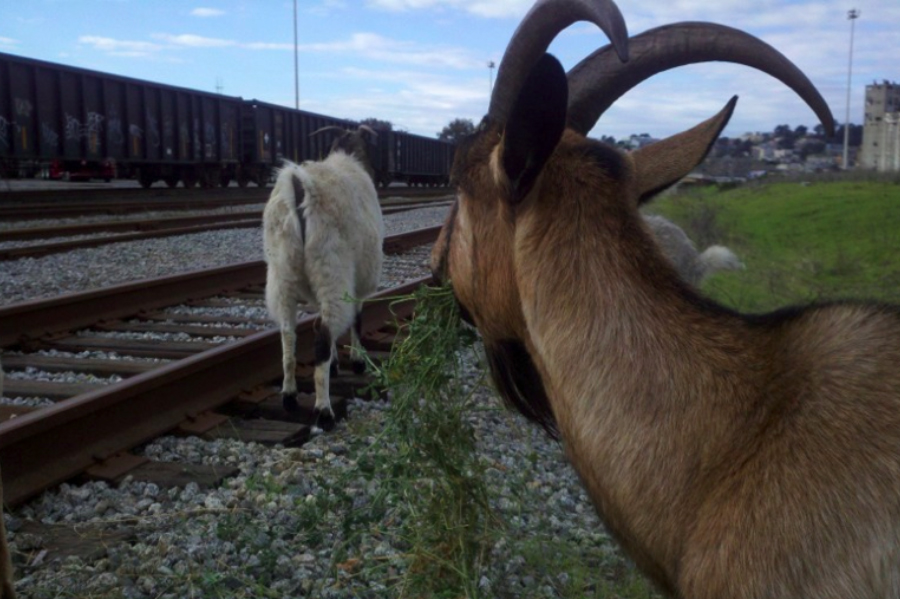 I know this because earlier in the day I spoke with Genevieve Church, executive director of City Grazing, a San Francisco nonprofit dedicated to sustainable land management who refers to goats as the “punks of the animal world.” Yes, she agrees, more people than ever are in love with goats, but she says they’re in love with the idea of goats as opposed to the reality of them. “Dogs are considered ‘man’s best friend’ because they actually have a great deal of loyalty,” she notes. “Goats do not.”

Simply put, goats aren’t pets: They don’t potty train; they don’t box train; and they don’t learn to wait for you to take them on a walk. Instead, once they get bored with your property, expect them to start pissing and shitting all over your house because, like honey badgers, as Bathory rightly noted, goats don’t give a fuck.

Like most everyone I’ve spoken with this week, Church thinks people are responding so affectionately to goats in large part because of our current political climate. “Humanity’s got a lot of problems currently, and goats are a safe, comforting entity to be around. We long for a connection with nature, but we don’t quite know how to find it anymore. The combination of novelty and escape makes them very appealing. Make no mistake: I love my goats. I just don’t carry the illusion that they love me back.”

Back at Party Goats HQ, Raskin struggles to contain her excitement when discussing what lies ahead for Spanky and Pippin. When Cosmos wraps at the end of the year, she plans to take six months off to focus exclusively on implementing a number of ideas, including “Goat Gouture” high fashion; using Spanky and Pippin as brand ambassadors for apparel, products and social influencers; and 3D-printed Game of Thrones dragon costumes, complete with face masks and rippling blue scales sewn onto the body suit.

Raskin, of course, will be Daenerys, the “Mother of Goats.”