The Hoops Wrestlers Are Forced to Jump Through to Cross the Border into the U.S.

Truthfully? They tell them whatever it takes

Professional wrestling is a global business, with high-level talent constantly springing up all over the planet. And with the independent wrestling scene booming, more wrestlers than ever before are traveling across international borders — and not always on the up-and-up. Some, most notably Canada’s “Speedball” Mike Bailey, have gotten caught at the American border while traveling for work on travel visas, getting banned from the U.S. for five years. Fellow Canuck Josh Alexander found himself in a similar situation, only for his attempt at a work visa (sponsored by AAW, a Chicago indie) to go nowhere.

So, what exactly does it take to prove that you’re not taking an American’s spot in an industry as unique as pro wrestling — especially during a political moment when border security is a relentless presidential talking point and U.S.-Canadian relations have become seriously strained?

“It’s a fairly simple yet complicated process to get the U.S. work visa,” Canadian wrestler turned trainer Lance Storm (real name Lance Evers) explains. “I had one for [Smoky Mountain Wrestling], ECW, WCW and WWE. The first one is the hardest. You have to show that you have extraordinary abilities and won’t be taking the job of an equally qualified American. The visa I always got was a P-1 visa, which is an entertainment visa. To get one, you need to produce newspaper or magazine articles that show your level of accomplishments and also letters of endorsement from experts in the field. Those letters are to vouch for and illustrate your expertise in the field.”

Storm supplied copies of the letters attached to his original visa application to me, written by four figures of note from the wrestling world circa 1994, when he was trying to get his initial visa to work for Smoky Mountain Wrestling (SMW), a Tennessee-based regional promotion. They came from SMW promoter Jim Cornette, WWE (then WWF) Vice President of Talent Administration J.J. Dillon, Wrestling Observer Newsletter editor Dave Meltzer and National Wrestling Alliance attorney Robert Trobich. The language, as with all letters of this type, is fairly similar, and Storm adds, “I have no doubt that, with the exception of Dave, the others just wrote what Jim told them it needed to say.”

While Cornette’s letter opens with the generic platitudes — “We feel that Mr. Evers’ talents as a professional wrestler are unique, exciting to our fans and will impact our business in a dramatic way” — it also, albeit indirectly, references Storm’s reputation as a well-behaved teetotaler. “The person­al aspect is as important as the professional in our company, and Lance’s personality and exemplary conduct will also set the exam­ple for our younger viewers that we strive to project, as many of our wrestlers become role models for the kids and teenagers,” wrote Cornette. “Few athletes we have interviewed have as positive a lifestyle as does Mr. Evers.” 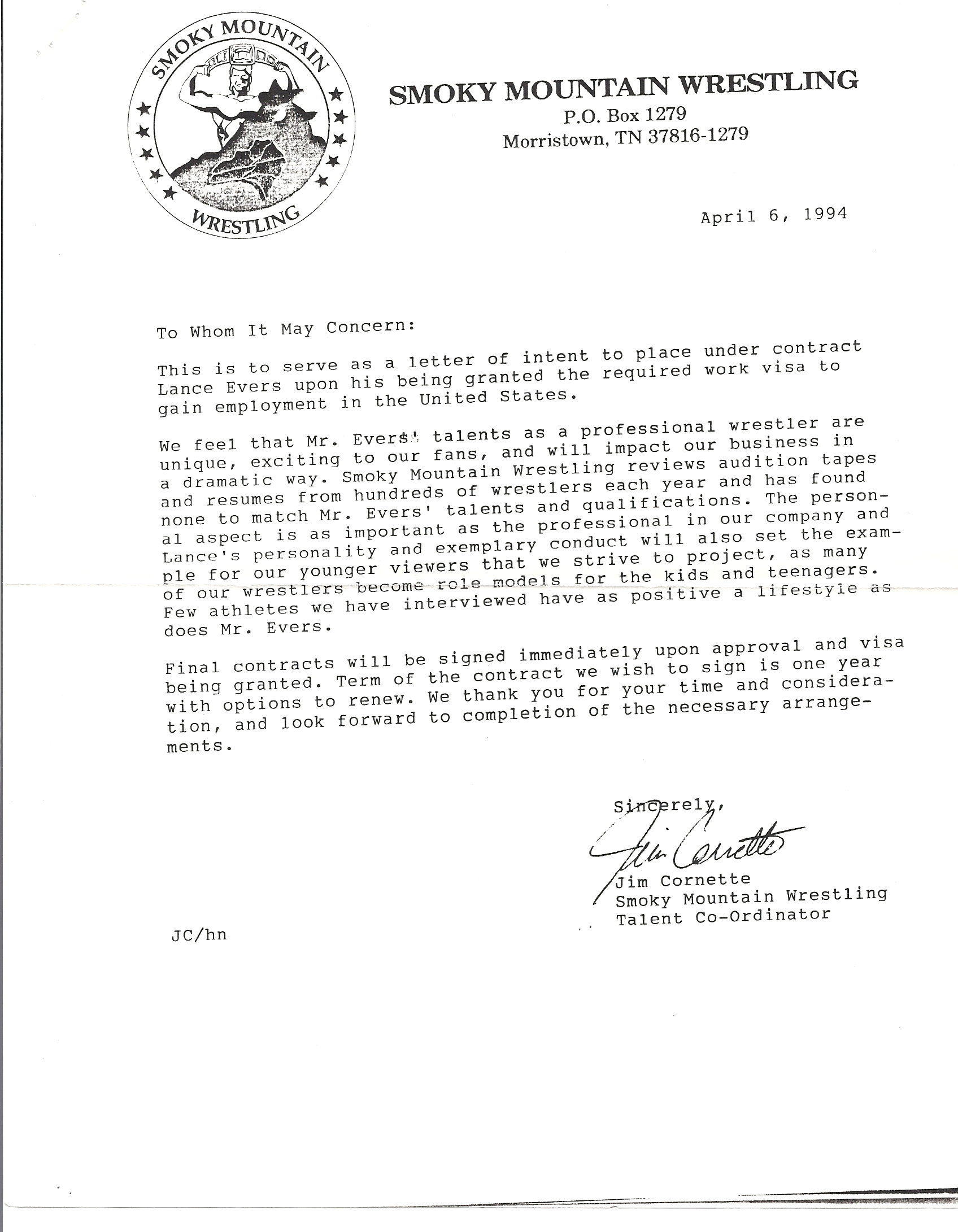 Dillon, meanwhile, focused on the in-ring aspect of being a pro wrestler. “‘Lance Storm,’ in my opinion, has a very unique style of wrestling,” he wrote. “The aerial maneuvers he performs, which he has incorporated into his style, especially with a wrestler of his physical size (about 6 feet tall and 230 pounds) assure him a tremendous future in our business.” Dillon also made sure to mention that “the World Wrestling Federation would have a definite interest in his availability to contract with our organization at some future date” should Storm’s application go through. (Storm ended up working for the WWE seven years later in 2001.)

Meltzer, as both a journalist and an analytical type in general, gave a very detailed picture of what made Storm uniquely skilled as a pro wrestler. “I first saw tapes of Lance Evers, professional name Lance Storm, several years ago when he first broke in on a show from Winnipeg, Manitoba, Canada,” he wrote. “Even with little experience, he was one of only two wrestlers out of about two dozen on the tape that looked like they would go places.” Throughout the rest of the lengthy letter (using the same small font as his publication, to boot), Meltzer also cites Storm’s proficiency at different styles around the world and SMW needing fresh faces to avoid folding like other regional companies had. At the time, there was an especially finite amount of wrestlers with the experience needed to be featured in a promotion like SMW but hadn’t been seen on TV before, so that was a very legitimate point. Trobich, on the other hand, adhered to the idea of pro wrestling as a legitimate competition, writing that the “NWA views the competition between Mr. Evers and other Smoky Mountain wrestlers as an important ingredient in maintaining the global popularity of international wrestling.” 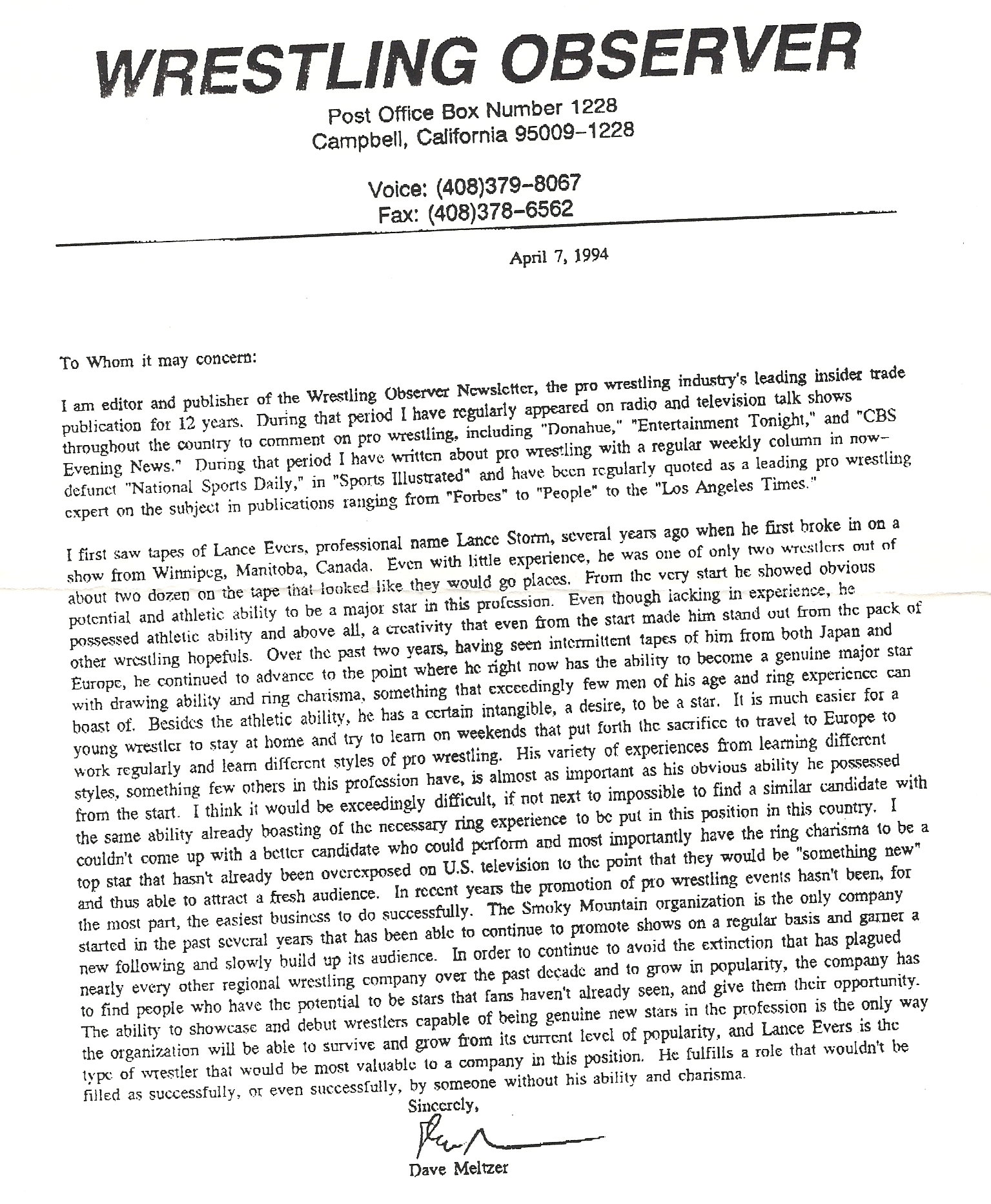 Storm, of course, got his work visa, thanks to both the letters and the clippings he sent, which showed him winning titles (yes, really) at home and in Germany, as well as appearing in Japanese magazines.

A perusal of the Alien Files (or “A-Files”) of other (deceased) wrestlers available under the Freedom of Information Act gives a broader picture of the process. The “A-Files of Interest” section on the U.S. Citizenship and Immigrations Services website, which features such names as John Lennon, George Harrison, Elizabeth Taylor and Peter Jennings, also includes the file of notorious figures like terrorist Tamerlan Tsarnaev and wrestler turned murderer Chris Benoit. The Benoit file appears to consist mostly of information compiled for him to obtain permanent residency in 1997 after having worked for WCW on two separate P-1 visas, and shows just how awkward it is to twist pro wrestling accomplishments into the type of merit needed for immigration applications.

“During the three years he has competed in the United States, Mr. Benoit has risen to a ranking of the top 20 wrestlers in North America,” wrote immigration lawyer Mark Newman of Troutman Sanders, the firm that represented WCW, in a May 1996 letter. “He is now a member of the No. 1–ranked tag team in the WCW, the Four Horsemen.” What these rankings are — WCW didn’t even use their own fictional rankings at the time — only Newman knows. To establish Benoit’s “extraordinary ability,” Benoit’s past championship reigns were cited, as was the aforementioned mythical number one tag team ranking as “nationally or internationally recognized prizes or awards for excellence in professional wrestling.” And his “membership in associations of professional wrestling which require outstanding achievements of their members” was established by his presence in promotions like WCW, which “allow only the very best and most talented wrestlers from around the world to become members.” (Any wrestling fan will tell you that this isn’t exactly true.)

With Benoit’s high status in wrestling, he also had plenty of luminaries who wrote letters for his previous applications, including Dusty Rhodes and Ric Flair; Trobich, too, sent a similar letter about “international competition” to the one he sent for Storm. The most glowing and non-boilerplate letters, though, came from Benoit’s longtime Japanese associates, New Japan Pro-Wrestling President Seiji Sakaguchi and wrestler/politician Hiroshi Hase, who referred to Benoit as “one of my best friends.” 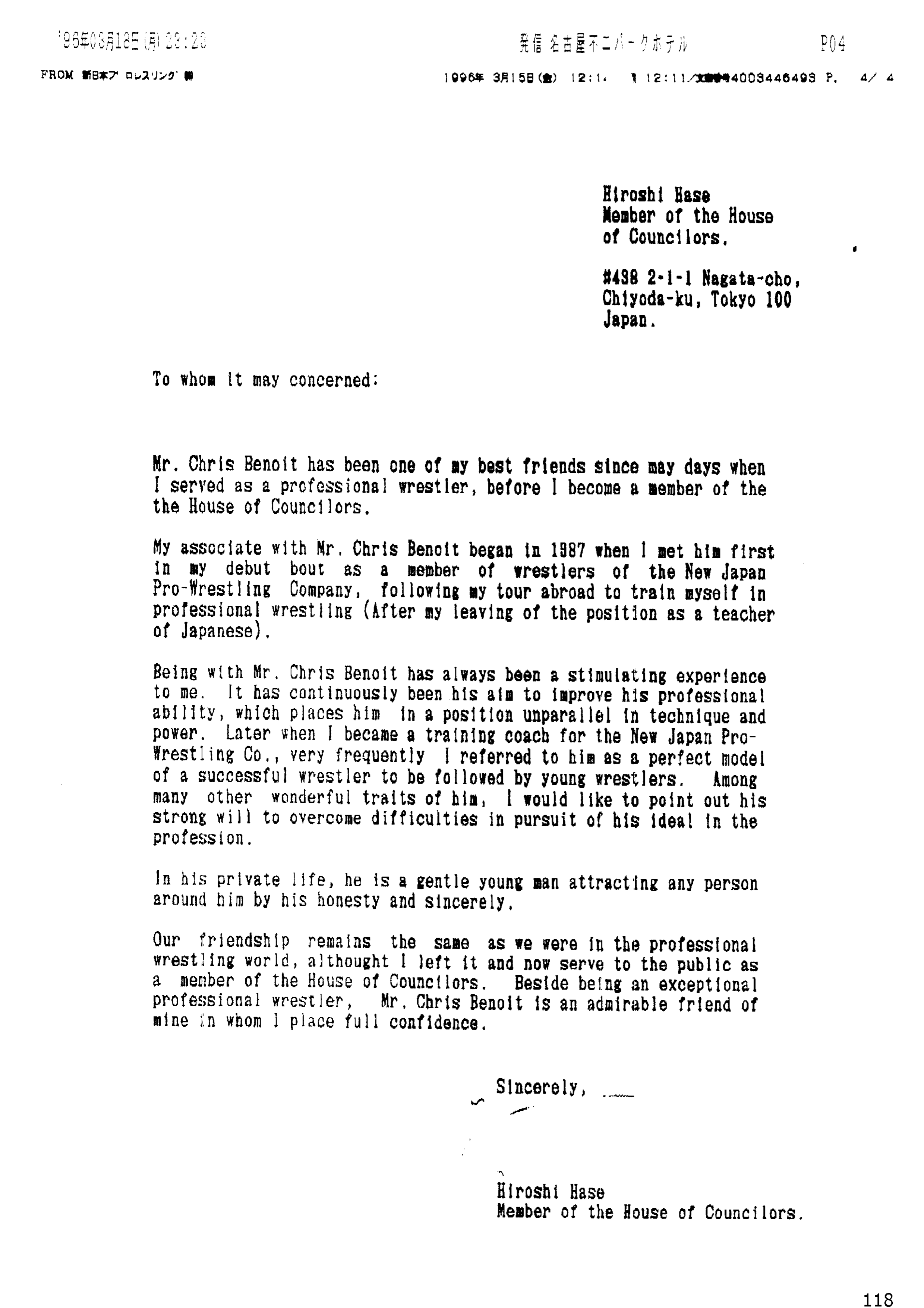 Whether he was or not is besides the point — it succeeded in getting Benoit into the country, regardless of the truth behind such statements. Hell, in 1985, Vince McMahon wrote under penalty of perjury that “recently, we have been unable to find qualified professionals to wrestle, either by developing promising young wrestlers or hiring seasoned and experienced professionals.” Not only was the WWF aggressively expanding at the time with the hiring of numerous highly qualified wrestlers, but the particular talent who he was trying to get through the immigration process wasn’t some random new international find: It was Andre the Giant, who had been wrestling for McMahon and his father’s companies for a decade. 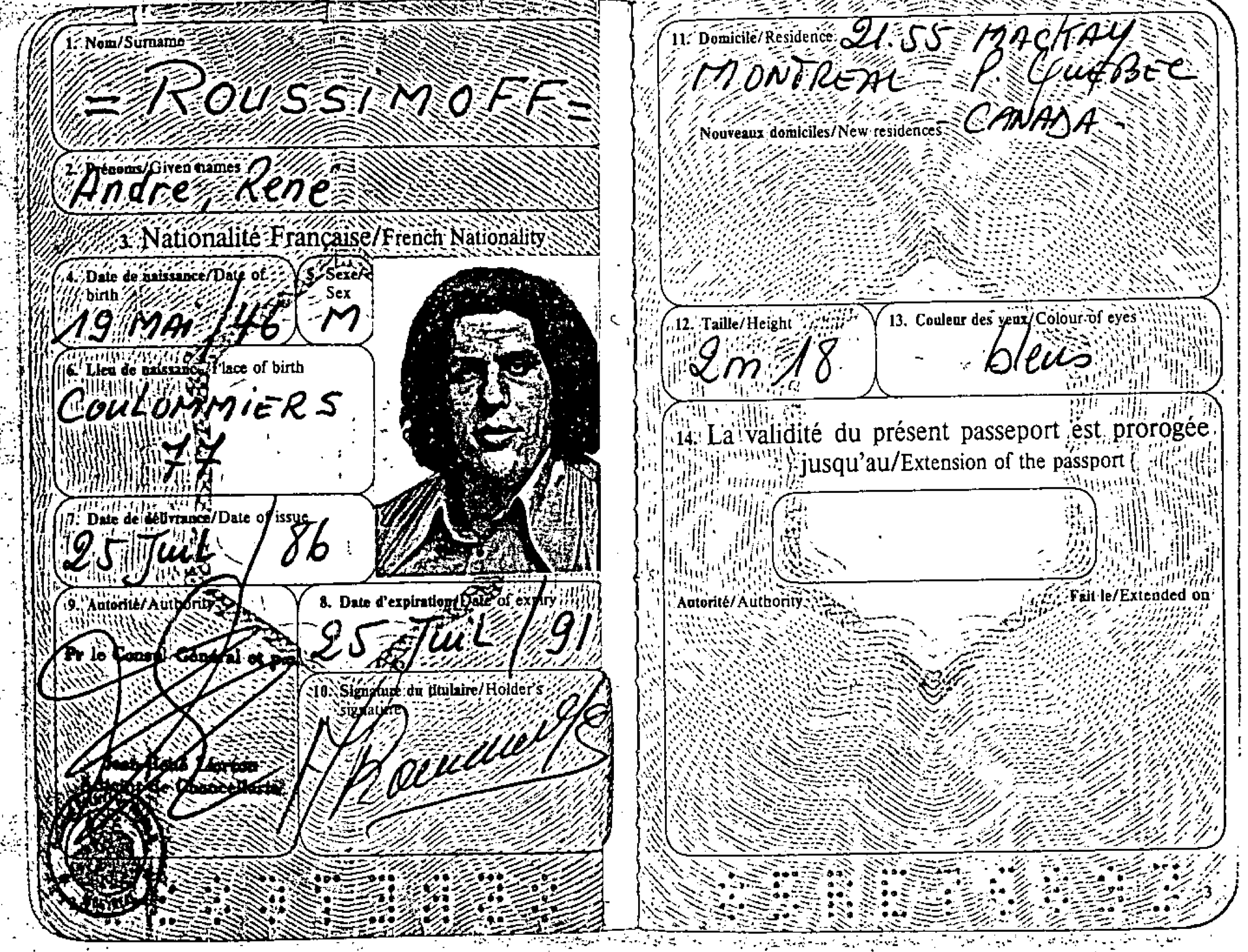 All of which is to say, it’s a lot of bureaucracy to have to skirt. And for the Canadians, especially independent performers within driving distance of the U.S., it must be extra frustrating. Going into the U.S. requires jumping through hoops or great risk of deportation for them. In Canada, however, it’s the exact opposite: Performing artists, including “wrestlers from the World Wrestling Entertainment, Inc. and similar groups,” don’t need any kind of work permit in Canada. They can come and go as they please.

But that’s part of a bigger conversation about immigration policy, isn’t it?

David Bixenspan is a freelance reporter who lives in Brooklyn. Check out his weekly wrestling history podcast, Between The Sheets, on all major podcast platforms, and subscribe to his Substack at BabyfacevHeel.com.