The Flamin’ Hot Cheetos Taste Test Is a Baptism by Fire

For Flamin’ Hot Cheetos fans, it’s not just a flavor — it’s an oddly aggressive personality. Why? There’s only one (extremely spicy) way to find out

Not to be the killjoy grandpa in the room, but why do food trends even exist? I’d understand them more if it was the year 1500 and we were in Italy learning about tomatoes for the first time; that’s a good food trend, one that corrects for something that’s missing. But this is the year 2020, and we’ve pretty much learned about all the foods, right? Even the crappiest corner store carries a bounty to satisfy a richer wealth of cravings than some poor sumbitch in the year 1500 would have seen in the course of their entire life.

Do we really need to make crap like rainbow bagels or those fearsome milkshakes with the entire movie theater candy counter plastered to the outer rim of the glass? Do food trends seek to satisfy legitimate desires, or only to grab a cheap 15 minutes of Instagram fame on the way to obscurity?

I’ve asked myself these questions many times in this age of postmodern dining, but never more than when facing the latest Flamin’ Hot something-or-other.

Now, I’ve never been a Cheetos girl. I have no quarrel with junk food — I simply prefer cheddar Goldfish and Cheez-Its, snacks whose solid crunch makes them feel a little more substantive than the airiness of a Cheeto puff. When a certain vibrant-skinned grifter became president, I took no joy in the constant jokes about President Cheeto and, more tasteless still, Cheeto Hitler. Still, Cheetos and I have shared a planet for a long time with no issues. Why should that change now?

I’ll tell you why in two words: Flamin’. Hot.

I mean no disrespect to all my hardworking brothers- and sisters-in-arms out there who want to come home after a long day of work, kick up their feet, and enjoy some spicy snacks. I like my food on the spicy side myself. What I hate is spicy food as an identity, a meme. And no food is more meme-ified than a food that’s been made Flamin’ Hot. There’s spicy food (benign, friendly) and then there’s Flamin’ Hot food (weirdly aggressive! ill at ease in its masculinity!).

I wouldn’t mind if the trend had begun and ended with Flamin’ Hot Cheetos themselves, but of course that wasn’t the case. The Flamin’ Hot gospel is everywhere, even in the movie theater! Here’s the Flamin’ Hot selection at my local supermarket, which rarely carries pantry basics as straightforward as cocoa powder or apple cider vinegar: 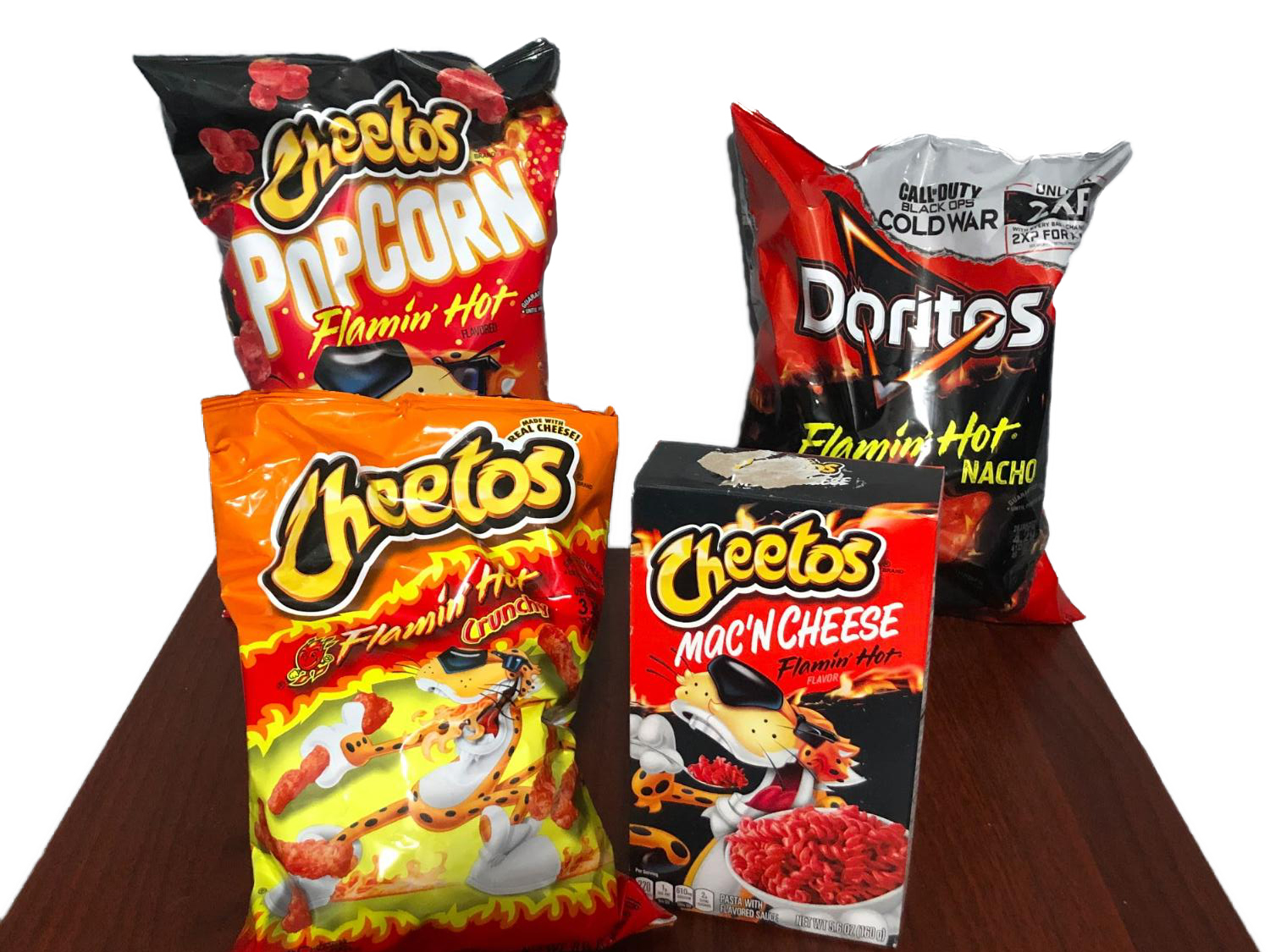 That’s four separate Flamin’ Hot products. One isn’t even Cheetos-branded — Doritos, my old love, what are you doing? Separately, I don’t know if you can tell from the photo, but that box of Flamin’ Hot mac ‘n cheese is beat up. It was quite dusty when I encountered it, the only box of its kind on the shelf. I was surprised that the cashier was able to ring it up, as it looked in every way as if it had been deposited on a shelf by a capricious demon.

The branding seems to borrow from that of small-batch hot sauces. It’s never just “enjoy our spicy food”; it’s always “hold onto your rectums, capsaicin kings, and get ready for the five-alarm ride of your fucking life!!!!!!!” Look at the packaging — it’s all red and black and flames, like a Guy Fieri outfit as worn by the devil down in his Hell. It’s just food that’s a little bit spicier than other food. What am I missing? Why the macho energy?

I decided to delve into the world of Flamin’ Hot food products in an effort to find out.

Cheeto fanatics speak lovingly of the tactile experience that is holding and eating a Cheeto: the dust that coats the outside, as fine and mineral in quality as sand; the way that dust turns to grainy, flavor-blasted mud upon contact with your mouth. But I find this dust to be an annoyance, and I’m conspicuously not the only one:

With the Flamin’ Hot variety, I wondered idly if I was facing down a similar moment to that of chopping jalapeños. Would I need to aggressively sanitize my hands before touching anything else? After all, they had already become so red after making contact with a single Cheeto.

I actually liked the flavor, which surprised me, because I’ve spent years so irritated by Flamin’ Hot branding that I never bothered to consider whether the taste was any good. And I thought it was cute how the powers that be made this Flamin’ Hot flavor powder so red, as if borrowing from the warning colors on a poison dart frog. They really want us to feel like we’re doing something powerful and epic when we eat these silly little puffs!

I did not feel more masculine or virile after eating three Flamin’ Hot Crunchy Cheetos, though, so I decided it was time to move on to one of its cousins.

The back of this bag reads, “WHEN POPCORN MEETS CHEETOS… IT’S A CHEETOS THING” (caps lock very much sic). I have no idea what that could possibly mean; I suppose it’s a Cheetos thing. 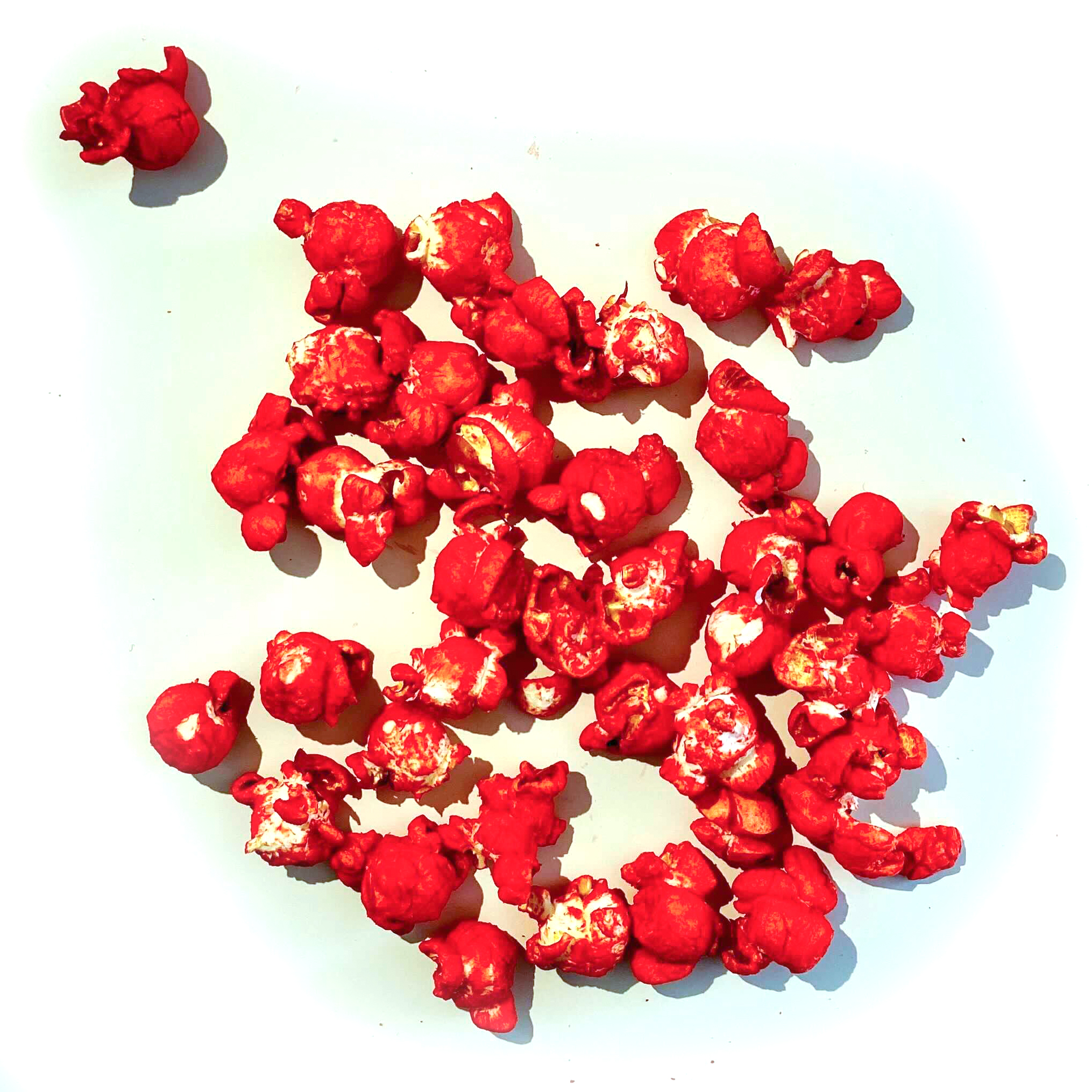 A single piece of Flamin’ Hot popcorn tastes more like cayenne pepper than an actual pinch of cayenne pepper. It’s not even spicy, exactly — the taste hits in three distinct, and distinctly unpleasant, stages. First off, a tart cheese powder taste that I suspect reminds us all of that one particular kid on the school bus who didn’t have the home training to eat a less offensive snack in an enclosed space than a bag of stinky Smartfood popcorn. Second, a momentary hit of cayenne burn, straight to the tongue. Third, the entire sweetish, bland inside of the popcorn that isn’t covered with seasoning.

I didn’t feel as if I’d gotten my pump on after eating two pieces of Flamin’ Hot popcorn, but then again, maybe you have to eat more than two pieces to get the full rugged effect — a task that didn’t appeal to me in the least. Rather than struggle through more of the popcorn, I moved on.

This was the product I was most excited to taste, and also the product whose existence filled me with the most melancholy. Which is to say, all these products filled me with at least a little melancholy. And look, I’m no fool — I understand that both Cheetos and Doritos are made by Frito-Lay, so this product is really more like a crossover episode than a betrayal of values. 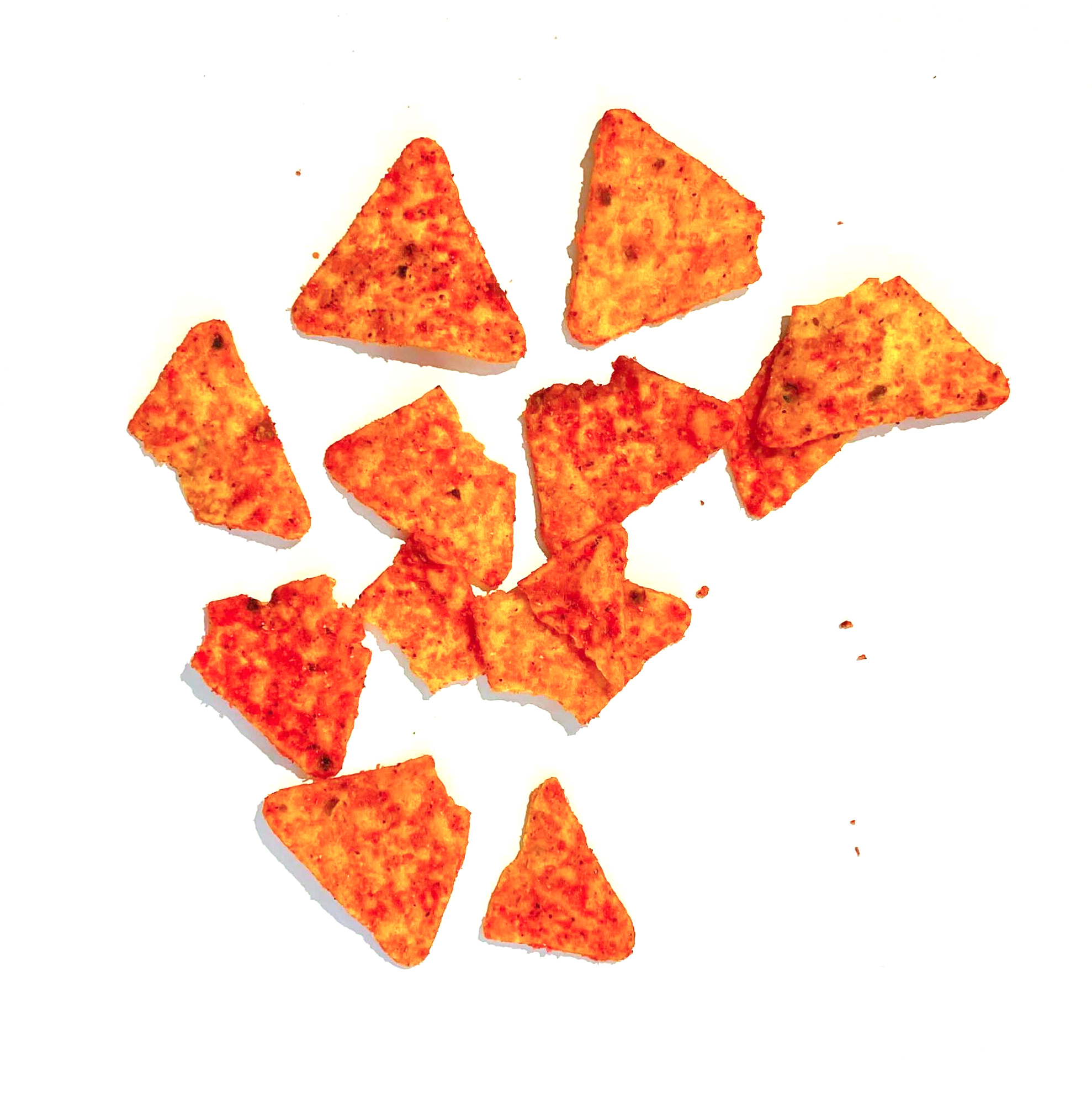 What I take issue with is my sense of powerlessness here. At any time, the mercurial minds over at Frito-Lay can take a food I like (Doritos) and turn it into a food I dislike (Cheetos). My ability to continue enjoying a favorite snack rests entirely on the whims of Frito-Lay, Inc. They could rob me of my beloved Doritos outright, if they wanted. They could abandon all Dorito flavors but the odious Cool Ranch. They could burn down the empire and turn it all into Cheetos. It’s too grim to consider for long, so I decided I’d better quell my anxieties with a Dorito or 12.

And this, as far as I’m concerned, is everything Flamin’ Hot should be. This is the Platonic ideal of the Flamin’ Hot. As I said above, my primary quarrel with the Cheeto is its lack of density. They do crunch, but it’s a wispy crunch without much chutzpah to it — the Cheeto’s construction is almost all air. Now, a Dorito, that’s got chutzpah. When you crunch into a Dorito, brother, you’re really crunching!

Then, too, the proprietary cheese flavorings of a Cheeto and a Dorito aren’t the same, at least according to my cross-checking of their respective ingredients lists. Unlike Cheetos, Doritos contain tomato powder as well as red and green bell pepper powder; additionally, Doritos contain romano cheese instead of the cheddar that’s in Cheetos. As far as I’m concerned, the more elaborate flavor of the Dorito makes it friendlier to Flamin’ Hot-ification. The spiciness has more to latch onto.

Sadly, the Doritos were by far the messiest Flamin’ Hot treat I sampled. One Dorito left my fingers scarlet down to the first knuckle. Bring your Oscar Isaac chopsticks!

I’ll get right to it: This doesn’t taste good. It’s salty and leaves peppery prickles in the back of the eater’s throat, but that’s about it for flavor. The heat of this mac ‘n cheese (and, I’d argue, the heat in all these Flamin’ Hot products) isn’t the textured, inviting heat of a vindaloo or the characteristic numbing heat of Sichuan peppercorns. It’s one note, the taste equivalent of a kid throwing a single popper in the street — a momentary nuisance followed by nothing.

Let’s talk about the color, too, because I keep getting stuck on this: 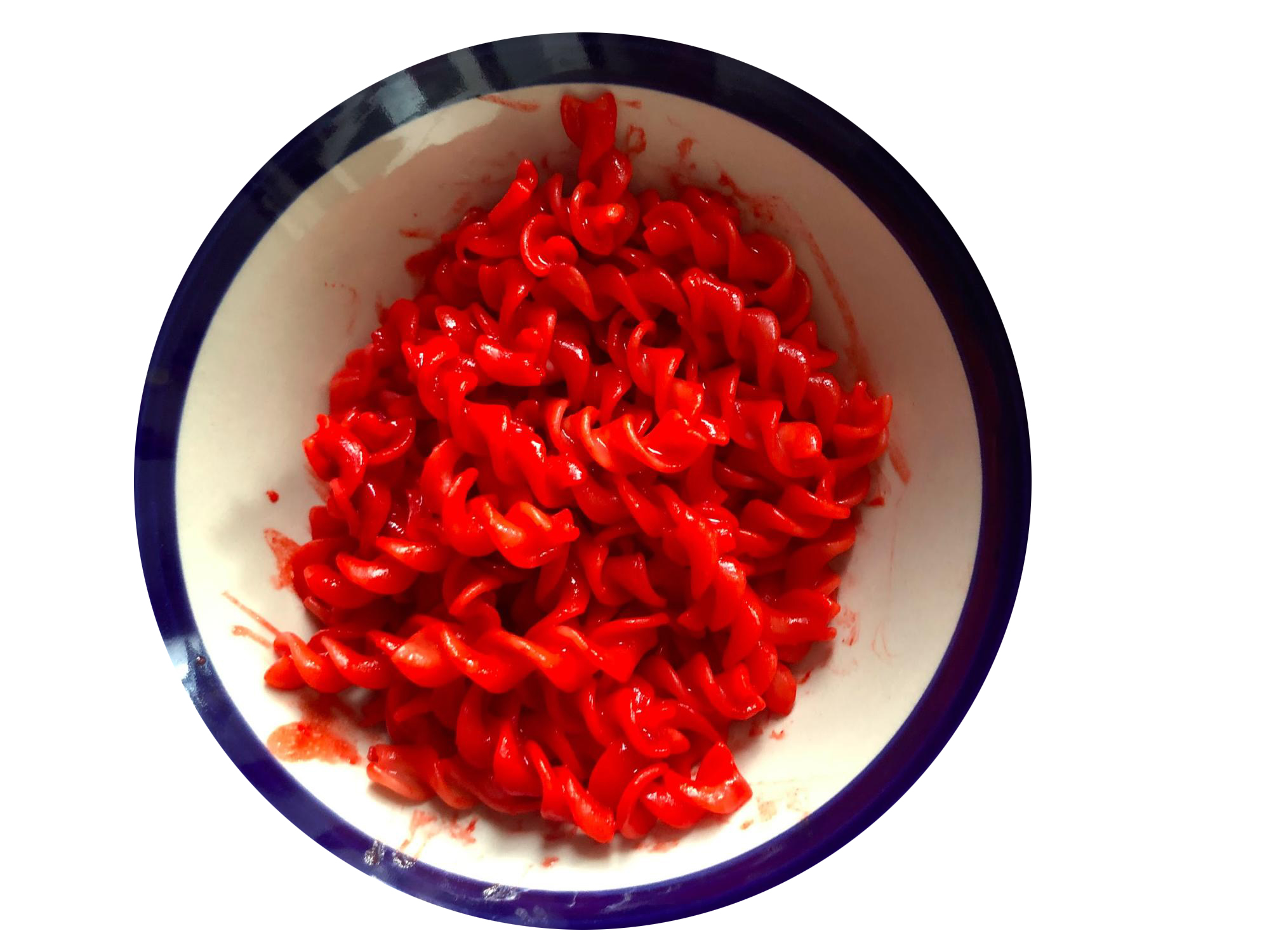 If you watch the Great British Baking Show, you’ve probably seen one of the judges dock points from an otherwise well-baked dish because the color is unappealing. Until now, I thought that was a bullshit judgment call, but I now have to admit that they have a point. I return once more to the poison dart frog. When you see this color on an otherwise tempting piece of prey in nature, it’s a warning: Do not eat me.

This, to me, is the irritant at the center of Flamin’ Hot’s whole marketing scheme. Spicy food doesn’t appeal to some people, and Flamin’ Hot products have latched onto the idea that those people are weaklings who just can’t handle the red-and-black-and-flame-printed awesomeness!!! It’s like, whip your dick out already, Flamin’ Hot Cheetos — either measure it for us or shut the fuck up.

I’m sad to say that none of my Flamin’ Hot snacks increased the veininess of my biceps or left me even remotely inclined to lift a weight. Could it be that all this X-treme marketing was all for show? Chester Cheetah would never lie to me, would he?

Jokes aside, I get it now, kind of. These snacks are fine. I don’t think I’ll buy any of them again, unless I’m really stoned in the chips aisle one day and accidentally make eye contact with those Flamin’ Hot Doritos. I see the appeal of them, but they’re still not for me, and their branding still grates on my nerves.

When people replace some crunchy thing in a recipe with Flamin’ Hot Cheetos, I still cringe a little. It seems like an insecure attention grab. To be clear, I’m mostly a fan of insecure attention grabs and engage in them myself regularly. But there’s something a little sad about finding myself face-to-face with someone else’s. When a person looks me in the eye and screams “admire me,” my first instinct isn’t to acquiesce, it’s to flee.

At the end of the day, yes, I suppose you can make a salt rim for your margarita out of Flamin’ Hot Cheetos. You can do any number of things, and you don’t necessarily have to consider whether those things would be cosigned by God and Julia Child. But just because you can do something, should you?

If the question is “Flamin’ Hot Cheetos?” then I’m afraid my answer is still, firmly, no.