The most popular, with 234,000 members, is “A group where we all pretend to be boomers.” Users take on the persona of 50- to 70-year-olds to poke fun at common generational tropes like the inability to use technology correctly and a willingness to overshare personal information online. Blurry photos, unpunctuated status updates and widely personal information are all prime Boomer content.

“That generation tends to regularly post about their kids and what they’re doing,” says member Joe Wood, a 32-year-old from Birmingham, Alabama. Recently, he posted the question, “has anyone seen my son.” Responses ranged from genuine concern — “Hopefully he is at WORK” — to unrelated, misspelled tangents, like “Is he single my grandaughte is looking for a SO.” 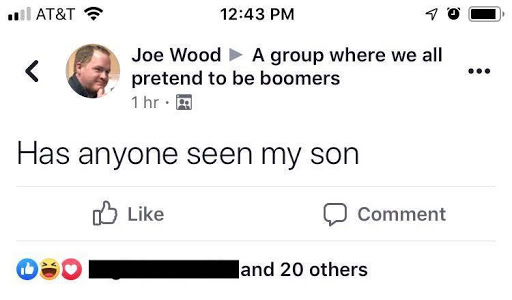 Adam Lee, founder of the “middle aged soccer moms” group, created the group after getting into an argument with a mother touting anti-vaccination beliefs in a leftist Facebook group. “She mentioned she was against vaccines for her daughter, ‘Mckaleigh,’” Lee says. “So I started mocking her by acting like a soccer mom then that made me wanna create [the group].”

Pretending to be a Boomer is fun for Woods not only because he gets to poke fun at his parents’ generation, but because he really enjoys taking on a character. “It’s really an improv message board,” Wood says. “Something is presented, and everyone just goes nuts coming up with whatever they feel works. I always love outlets to make people laugh.”

Facebook’s future has been debated for years as the platform, once the internet’s biggest news source, has become inundated with hoaxes and misinformation and embroiled in privacy scandals. Lately, it’s shifted back toward personal sharing. In 2019, news is practically invisible on the News Feed, but when you join a Facebook group, its posts dominate and garner a ton of engagement.

Roleplay groups are just the latest installment of this ongoing transition. Lorenz says role groups are akin to multiplayer video games like Fortnite or Call of Duty, connecting users across the globe on one shared mission: “It’s letting people express themselves through this roleplaying game that’s happening in real-time and with thousands of other Facebook users.”

The success of groups can’t be understated. The Boomers group debuted on May 12th, 2019, and slowly gathered a few thousand followers. However, in the span of 72 hours in late June, largely thanks to a viral tweet about the group, it jumped from 6,000 to 62,000 members, and that number quadrupled in early July.

“After spending years growing up in such a tense political climate, having a place where people could make jokes about their Aunt Petunia gave them a nice overlap of that nostalgic feeling from every family gathering,” Roney says.

The Toxicity of Stereotyping

However, as roleplay groups have rapidly increased in members, they’re gathering some toxic content. An onslaught of inappropriate, racist and overly sexual posts are popping up under the guise of semi-ironic imitation — ostensibly, the group is for poking fun at Boomer prejudices by imitating it. 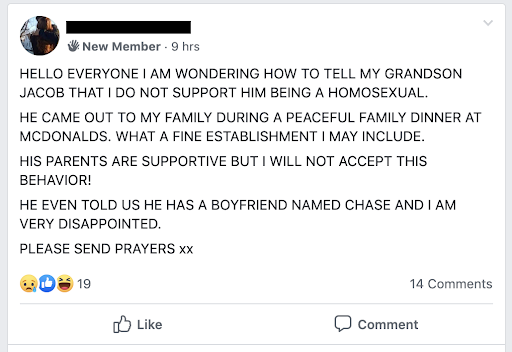 Other moderators have grappled with inappropriate posts in ways they’d never expect. Jimmie Flemming, co-moderator for the “farmers and cows” group, is dealing with an onslaught of posts sexualizing cows, specifically “udders basically being cow breasts.” “We had a few about farmers who were saying they wanted to have intercourse with cows or goats,” Lee says. “Just weird stuff, man.”

Over in the Boomers group, Roney has started clamping down on posts mocking Boomers as racist, Trump-supporting hillbillies. 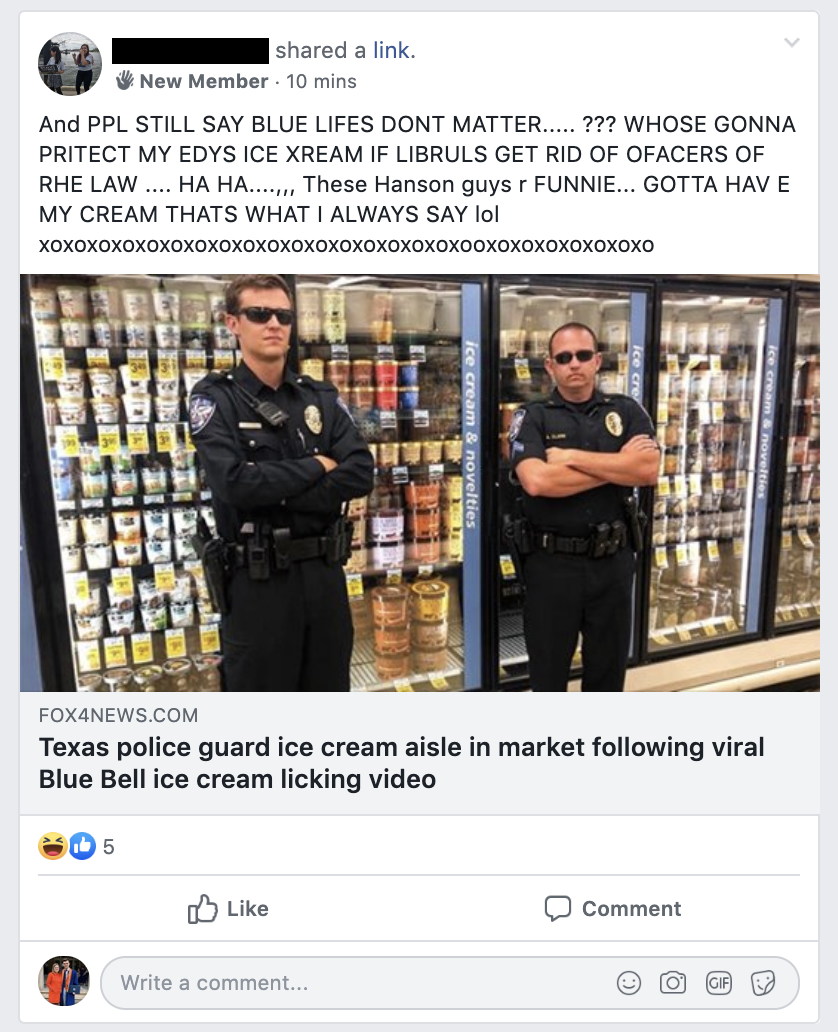 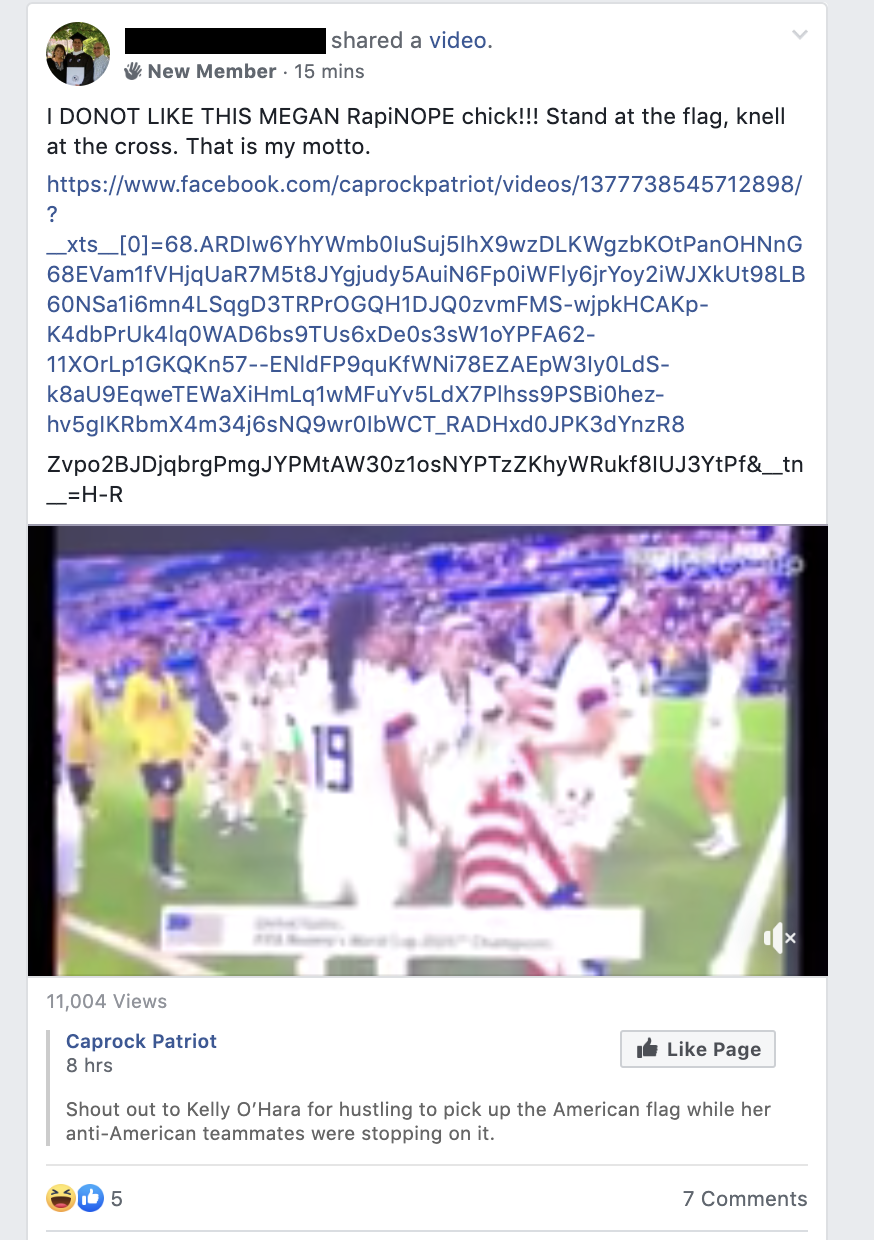 “I don’t want the group to be a place for people to brew hate and [cause] upset, even if it’s supposed to be satirical,” she says. When she and the other moderators can’t decide if a post is a joke or genuine bigotry, Roney differs to Facebook’s anti-harassment guidelines, banning racism, Islamophobia and homophobia. “We try to nip a lot of it in the bud whenever possible,” she says.

Still, that hasn’t kept users from posting racism or homophobia veiled as satire. In the “middle aged soccer moms” group, a user addressed the upcoming color-blind casting of The Little Mermaid, which stars black actress and singer Halle Bailey as Ariel.

With the caption “I CAN’T WAIT TO SEE ALL THE DISNEY REMAKES,” she posted a collage of classic Disney movie posters as if they’d had a color-blind cast. The role reversals ranged from innocuous (a dog as Ratatouille) to offensive: a heavyset black man as Mulan, a woman in whiteface and a white wig as Pocahontas and a bald woman as Rapunzel.

One commenter broke character to say: “[Out of character] why post racist shit tho i get its a ‘joke’ but seriously.” To this, the original poster responded: ‘half the shit on this group is racist/homophobic/classist/ableist… it’s done [in character]. It’s not reflective of anyone’s actual beliefs.” 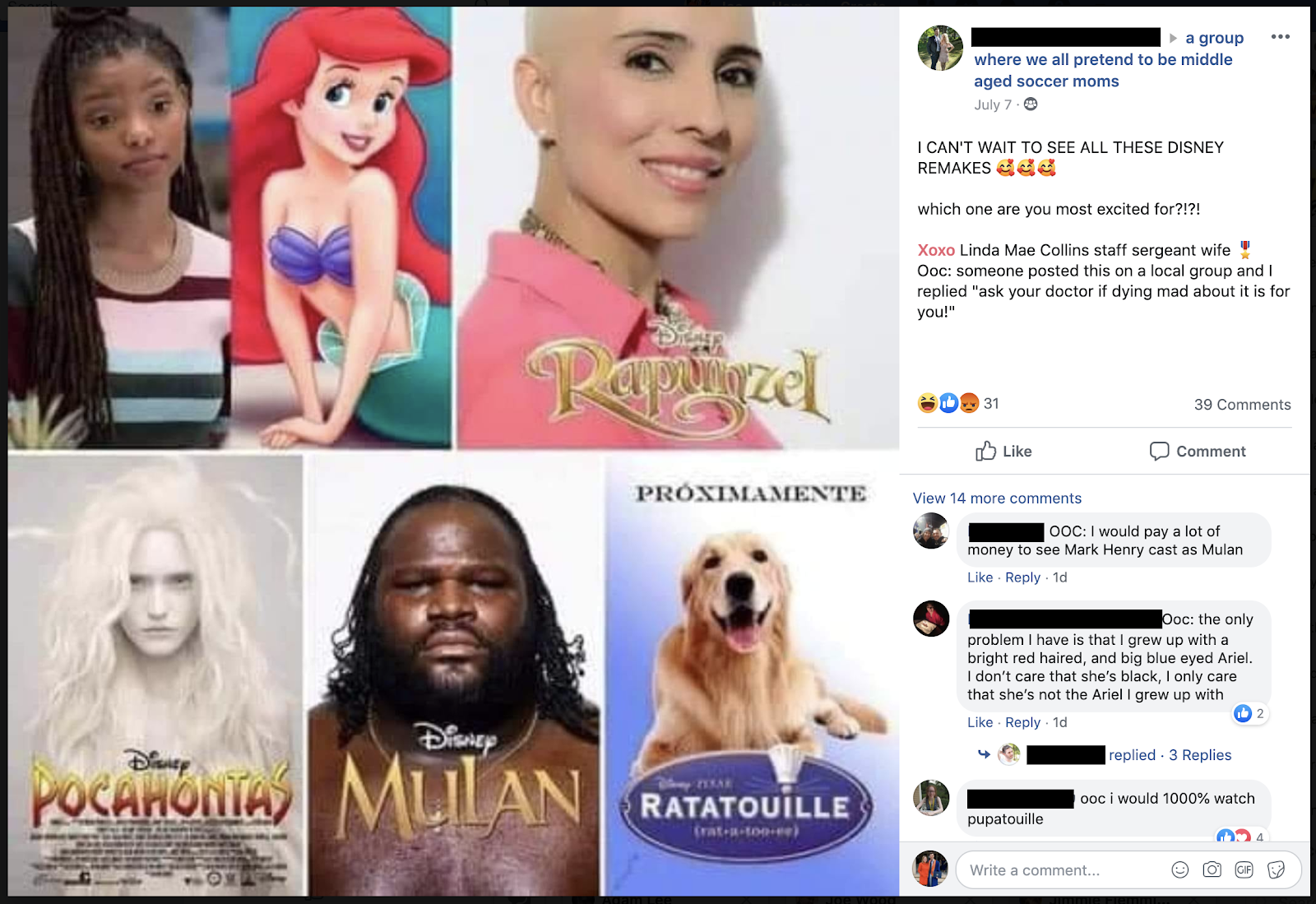 This all reflects another massive ongoing issue at Facebook: its notorious struggle — and failure — to police its own platform. Because Facebook largely does not monitor groups, the moderators are left to determine which behavior is good and bad. Most pin guidelines on what they consider to be an inappropriate post worthy of being deleted. But when Facebook does remove a post, moderators aren’t always told why, they tell MEL. They don’t get to see which terms of service were violated, forcing them to effectively self-moderate in the dark.

“Pretend to be boomers” group co-moderator Robert Snider wants more instruction from Facebook, including specific harassment protocol. “By knowing what content they’re removing, we can gain a fair assumption of what needs to be further implemented or reworked,” he says. The group’s moderators are struggling to keep up with the onslaught of hate posts and trolls. The group started with 10 moderators to comb through posts. Now there are 30.

Because of the overwhelming number of posts and proliferation of hate, some users have started to create secondary groups. Since the Boomers group has gotten so large and it took days for her to receive approval, Renay Albert created her own group, aptly titled “a group where all pretend to be boomers but with less members.” She currently has over 3,500 members, and moderating has taken over her life. “Any spare time now is pretty much reviewing posts or approving members, she says.

But Albert won’t be deleting the group anytime soon. She’s brought in two more moderators to help regulate the group, while she credited her fellow users with becoming good at reporting and calling out inappropriate posts.

Plus, the content is just too good to forgo. I asked if the group was still worth her time. “Yeah,” Albert says, “because the memes are good, lmao.”