Europe’s Politicians Have Set the Bar for Himbo Vaccine Pics

I mean, get a load of these shirtless hunks: no thoughts, head empty and an arm full of Pfizer

European men: They’re not like American dudes, are they? The European fellow can likely dribble a soccer ball, and jump into a pickup game without getting winded in the first minute. He’s fluent in more than one language, and has taken in the culture of many other countries. He eats better, no doubt, and cooks better, too. If I’ve learned anything from foreign films, they also have hotter sex.

Because — let’s admit it — the European guy makes for a superior himbo. And when it comes to getting vaccinated against COVID-19, they’re making sure the world knows.

Oh, Minister Véran, how coy you are! You pull your shirt up to cover the nipple — le tétine, hon hon hon — but the flex of your brow says, “I’ll show you if you ask.” For now, the unsheathed arm and supple collarbone are more than enough to excite the imagination. Yes, if you’re a man of status and fine physique, you’ll want to get halfway out of your button-down shirt to receive the shot. These are images for posterity, for convincing the skeptics that the procedure is safe and effective and also… sexy?

Why the hell not. Once you’ve made the appointment, it’s time to start working out: The public is going to see at least your shoulder, so it ought to be nicely toned.

Of course, Véran was simply trying to live up to this vaccination beefcake pose by Kyriakos Mitsotakis, Prime Minister of Greece since 2019. Mitsotakis scored big points for that luxurious mat of chest hair, complemented by his traditional leather thong necklace, thought to have a Greek Orthodox cross as its pendant. No shyness about the nipple here; it’s all hanging out. (You can catch the surprisingly in-shape head of state fully shirtless on his beach getaways.)

Hard to think of a U.S. politician achieving these serenely masculine vibe — even Barack Obama in a bathing suit on the coast of Greece was more dorky dad than “daddy” — and I think we can all agree that it was best to keep President Biden covered up so the nurses weren’t blinded by the glare reflecting off his intensely white torso. Sir, I mean no disrespect, I am also a translucently pale Irish-American. I’m glad you rolled up your sleeve instead, it was for the best.

Well, some chaps from the U.K. Parliament gave it their best college try, but I’m afraid they suffer from the same not-suave vibes as we here in the States. Croatia’s Minister of Finance, Zdravko Marić, outdoes them with a solid, muted, extremely tight T-shirt that shows off his remarkable pecs. Does it matter what his face looks like under that mask? I don’t think the people thirsting after him even know he has one — he’s just a set of muscles and a crisp haircut, which is all you need for himbo excellence. If the pants look rather form-fitting as well, you can call it a bonus. I really, really did not think a single economist had this body type. 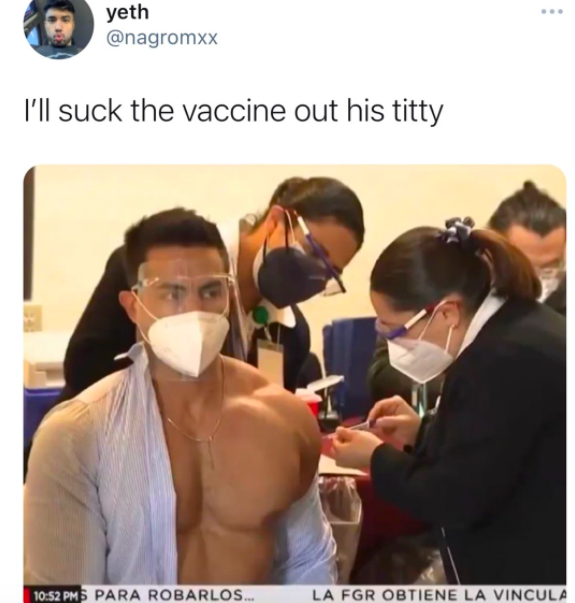 Bitch, it’s the serve. I mean get a load of this hunk. Impeccably sculpted, tasteful chain, fashionable shirt, a steely gaze that’s Zoolanderesque and no chances taken with his health: that’s a medical-grade mask and face shield. Hot. What country is he in charge of, and where does one apply for citizenship?

Ah, but this is no mere minister, nor is he European. It’s Dr. Alejandro Silva Moreno, an opthamologist and Instagram model based in Mexico City. Not only is he accomplished, perhaps he isn’t tainted by scandal like some of the men above. (Mitsotakis has been criticized for, among other things, appearing to break COVID-19 restrictions on larger gatherings; Véran has been investigated for potentially mishandling the outbreak in France; Marić has been implicated in earlier corruption; the Tories are, uh, fucking Tories.) Goes to show that whatever leaders across the Atlantic can do in terms of flexing for the camera, none of them have what it takes to match the swagger of a health professional with 70,000 thirst followers and a spotless résumé.

Just kidding about that last part: Alejandro actually jumped the line for his vaccine and was caught partying in Puerto Vallarta!

Jeez. I guess the only vaccinated himbo we can sort of stan is Portugal’s President Marcelo Rebelo de Sousa. He may be a right-leaning, anti-abortion old codger who actually had coronavirus, but he kinda nailed his flu shot pic: