When I was in college in my 20s in the brutally hot sticky South, sitting in freezing rooms on campus was miserable enough. But because of robust air conditioning, and the fact that the only bras I had in 1990s America were paper-thin (thanks, Calvin Klein), my nipples could make no such distinction between what you might call their inside vs. outside voice. They were permanently hard at all times inside — through T-shirts, sweaters, wool blankets, a Hazmat suit.

My boyfriend and his male friends, classic Southern gentlemen that they were, had a favorite choice deadpan expression anytime they’d notice me, or any woman, suffering this fate, and they would take great pleasure in announcing it to anyone in earshot: “Turkey’s done!” (high-fives). Because you see, when an actual turkey is finished cooking in an oven, the built-in thermometer pops out like a stiff eraser.

We’ve talked at length here about our culture’s helpless obsession with boobs, but less discussed is our obsession with nipples. The boob may be the squishy canvas that props up our fantasies, but the nipple is the brushstroke that paints the story. It’s the nipple that holds the tightly packed nerve endings that conjure the most eroticized sensations; also you can’t get to the milk (literal or metaphorical) without them. This may be why porn’s nipple game is varied and complex: From the long to the puffy, from the big to the small, there’s a nipple for everyone.

‘Is She Catching Me Staring?’

We sometimes call women’s nipples headlights, and in a sense, they are. But more like a light show. They call some serious visual attention to the owner, and they also “light up” the same erogenous response that happens in the genitals, which is why some women can get off entirely from nipple stimulation alone. And they light up some people’s brains just to look at them.

Which is why the question a woman asked men on Reddit recently is so amusing: “What do you think when you see a woman’s nipples through her shirt?”

It got 3,000 responses in 24 hours. The majority of the responses were one guttural syllable: 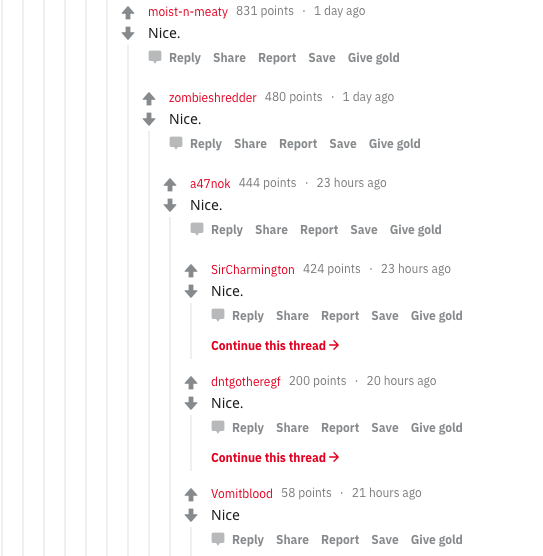 “Yeah this about sums it up,” someone finally managed to write in complete sentence form. “Sometimes it’s more like, ‘Ooh, nipples.’ If it was someone I was interested in, it would be a different story, though.”

“I think they are all good,” someone chimed in. “Like dessert.”

“Aside from a passing urge to stand and salute, yeah that’s pretty much my reaction too,” another said.

Yes, she is catching you staring. But like so many aspects of how women are looked at on a scale that ranges from ignored to admired to creepily eyeballed, it’s independent of how the woman herself might actually feel about her stiff public nips.

Here’s the thing: Women’s nipples get cold and “aroused” at the drop of a winter hat, and it is independent from being actually aroused. It shouldn’t be conflated with a sign of actual arousal, and yet, it is.

When I put the question to friends online about what they thought when they encountered a Public Nipple Situation, I got a range of responses:

Not Always a Joke

But it’s not always a casual, jokey occasion for women whose nips cut in on everyday life, and often women are held responsible for the inadvertent nipple crash they leave in their wake. Case in point: A friend privately messaged me to explain that, as a grad student on her way to becoming a women’s health practitioner, she did her first clinical rounds in the field at an OB-GYN office. Excited, she purchased a new outfit appropriate to the work, including a white sweater from the Gap.

A few weeks later, her advisor (a woman) called her to speak about her performance. Expecting to get feedback on how she handled daily breast and pelvic exams, instead, the woman let her know that the entire office (of women) had contacted her let her know they had been made deeply uncomfortable by her protruding nipples.

She recounted her innocence in what she now calls Nipplegate: She didn’t wear padded bras at the time, because, according to her, she didn’t like to make her boobs look bigger. The question of her nipples standing at attention had never occurred to her, nor had anyone pointed it out thus far in her young life.

That was the day she learned that women are held responsible for the feelings their bodies provoke in others, even when their bodies have no intention of provoking anything. She cried in a nearby coffee shop.

This is a recurring issue for women that shows up in advice columns. Should you free the nipple at work, particularly when so much of women’s attire is sheer and blouse-y? The answer? Probably not. But it shouldn’t matter! But if you do it, remember, as an old Dear Prudence column advised, “If you release your nipples, some people are going to have a hard time remembering to look you in the eye.”

But that was 2011. In 2013, Anne Hathaway’s nipples won her the Oscar, and their own Twitter account. By 2015, women were routinely taking up major platforms to remind everyone that women shouldn’t have to hide their nipples behind padded bras, because we have nipples. Deal with it.

“Besides,” Jessica Valenti wrote at The Guardian that year, “is it really women’s responsibility to hide the well-established fact that most of us have nipples, or is it men’s not to be such damn oglers?” If we can #freethenipple legally for women in public, she asked why can’t we do so in our everyday lives?

But what about dude nips? They have nipples, and those nipples are often hiding in plain sight — in large part because men can walk around shirtless in a number of everyday settings, no questions asked.

Then I saw it: A companion Reddit thread poked out a couple of hours after the first, asking the same Reddit commenters another version of the same query: “Better question: What do you think when you see a MAN’S nipples through his shirt?”

Surely, I thought, the responses will be different. In real life, a man’s nipples need not distract from his potential for greatness. He need not worry what they inspire in others. After all, unlike women, men don’t need their nipples to do anything else. A man’s nipples, while certainly erogenous, are a kind of developmental leftover. Though often thought to be vestigial, they never really functioned in the first place (though men can lactate).

In reality, they’re more like a false female start. We all start out as female, including with milk lines, and then when the sex hormones kick in, testosterone shrinks them down in men, leaving the nipple, but not much else.

Not much else, it soon became clear on Reddit, aside from PRIDE. On the thread, the same slew of NICE responses filed in. There were jokes, but they were a little more casual and bro-y. (After all, it was on the Ask Men subreddit.)

“Damn, that’s a manly nip,” was yet another.

Then someone added in an ode the man nip, as it were:

We met in the hall; it is but the briefest of chance encounters. And yet, within that moment, something catches my eye. His proud, erect nipples poking through his shirt mimic my own, which themselves rise righteously from the field of cotton which struggle to contain them. We do not need words, only the understanding that in this moment, we are brothers. What does his future hold for him? Will he be a world-renowned ice sculpter? Perhaps a diamond thief, cutting through glass security doors with nothing more than the gift god gave him. As we make eye contact, and a brief nod, does he also see what can be possible between us? And then the moment is gone. We continue to our separate destinations, our proud chest pokers leading the way.

And there it is: Women’s nips inspire horniness; men’s inspire pride, camaraderie, brotherhood. The world remains exactly as it was. Turkey’s done, indeed.