Can you only drink eggy booze at Christmas? What connects eggnog-based mayhem and the Confederacy? Let’s find out the truth.

The world is full of lies, and it’s hard to get through life without taking a few on board. Luckily, we’re here to sort the fact from the fiction, and find the plankton of truth in the ocean of bullshit. This week: Eggnog! Isn’t drinking a big glass of eggs a bit weird? What exactly is advocaat? And can 19th-century military cadets handle their nog? Let’s crack open some eggnog history, facts and trivia to find out.

Eggnog’s pretty weird, in that egg is traditionally a food. Eggnog — a concoction of eggs, milk and sugar — is pretty much custard, which, again, is a food rather than a drink. Drinking a nice cool glass of custard is the kind of behavior usually exhibited only by clowns, but somehow in North America it’s become a holiday tradition, often mixed with rum, brandy or whiskey. Like so many traditions, it isn’t really questioned, but if you grew up without it and then met someone as an adult who said, “In the winter I enjoy a nice glass of sweetened egg,” you’d assume they were a lunatic.

Eggnog is thought to have its origins in posset, a treat of 13th-century European monks that settlers in America with more eggs and milk than they knew what to do with rediscovered in the 18th century, replacing the monks’ addition of wine or ale with stronger spirits. George Washington was a fan, and had a recipe that involved adding brandy, whiskey, rum and sherry, because everyone in the past was permanently half in the bag (“I cannot tell a lie… I am fuuuuucked uuuuuuup!”). The recipe also called for 12 tablespoons of sugar — interestingly, by the year he became president, 1789, Washington had a grand total of one remaining tooth, the sugar-addled, smelly-breathed, egg-sodden founding father.

But yeah, drinking eggs. However delicious it is — and it is very delicious, lovely egg, lovely noggy egg — it’s a bit odd.

Lie #2: Advocaat Is the Same as Eggnog

Advocaat is often thought of as simply being boozy eggnog, the same stuff as in the cartons but with added alcohol. However, while eggnog is generally made from separated eggs, the whites whipped and the yolk retained for its silkiness, proper Dutch advocaat is all yolk, baby. It’s thick as hell, and really straddles the food/drink line. And, as a liqueur, you can make your own, from eggs and brandy. More widely available advocaat is made from both parts of the egg and therefore a bit more liquidy and less oozy.

Advocaat’s good stuff though. Swill it straight like an egg-mad Dutchman, mix it with lemonade to make a snowball or go for a more ambitious cocktail. Will you throw up if you have more than about four? Yes you will. Will you fart like total fucking crazy? Oh, entirely.

If you’re into eggnog, why limit yourself to the winter months? All the ingredients of the homemade stuff are available all year round — it’s not like eggs are a seasonal crop. And if it’s the store-bought stuff you like, go egg-wild and freeze a bunch. People get full boners for eggs at Easter, but only drink them at Christmas? Sounds dumb.

The Christmas connection stems from times when crops and harvests dictated how your year went, and winter was a time for a bit of post-harvest celebrating with rich foods and drinks that warmed you up and that you couldn’t necessarily justify enjoying all year round. Food historian Frederick Opie tells Delish: “In the winter, the wealthy would drink warm milk and egg beverages seasoned with pricey spices such as ground nutmeg and cinnamon and expensive liquors like brandy and sherry to keep it from spoiling.”

Pre-refrigerators, eggnog was presumably a hellscape in all but the coldest of weather. Working in a Virginia field in 95-degree heat, soaked in sweat from scything crops in the baking sun, a hundred years before proper refrigeration, the last thing anyone would want to drink would be a warm, gloopy, phlegm-like drink, getting thicker by the minute and slipping down your throat as uncomfortably and lumpily as someone else’s vomit.

But now? Nog away! Have a lovely July nog! Summer nogging for everyone — or, rather, eggryone! Nog nog nog! 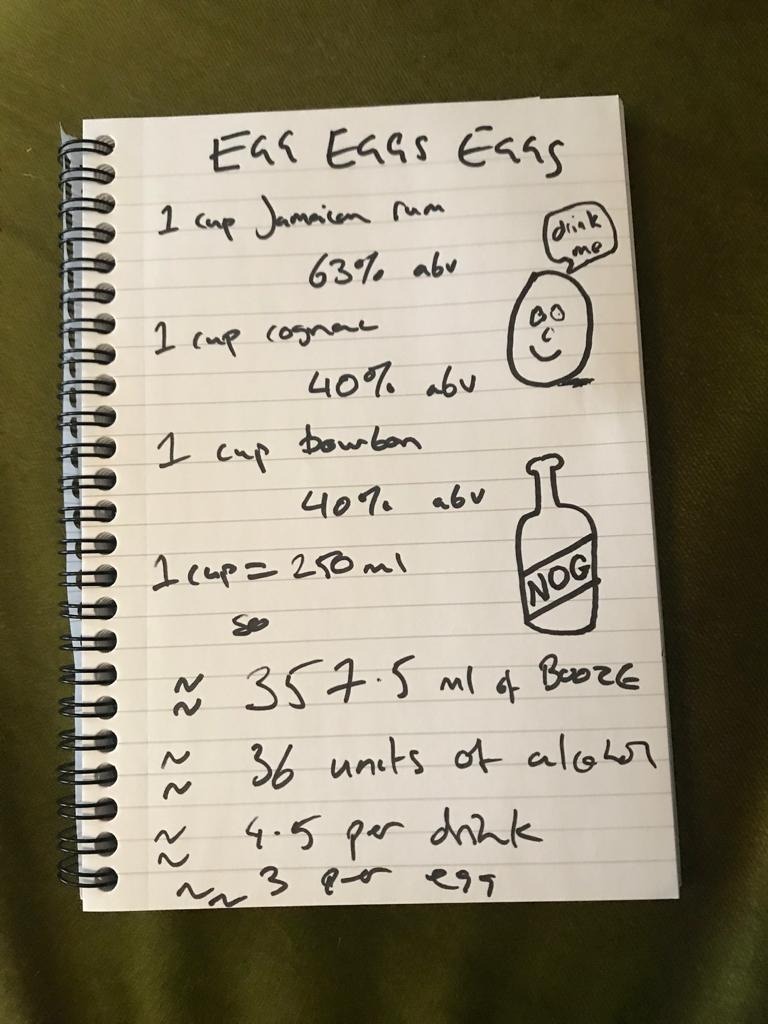 Assuming the person talking to you is French, and they’re speaking a mixture of French and English, if you’re drunk on eggnog you haven’t just had un oeuf, you’ve had several. Alton Brown’s eggnog recipe, for instance, requires 12 eggs to make eight to ten servings — more than one egg per glass of nog. Some fairly rudimentary math works that out to three units of alcohol per egg consumed, the equivalent of one pint of strongish beer. So, yes, if you’re drunk, you’ve probably had more than un oeuf. Sacre bleu!

Are you a 19th-century military cadet? Because if so, that eggnog is going to make you CRAY-CRAY. The Eggnog Riot of 1826 took place at West Point and nearly destroyed the place. The cadets at West Point were very into their booze, leading to the decision to ban alcohol on the premises. The thought of a dry Christmas appalled the cadets, and a few of them took it upon themselves to smuggle as much booze as they could get their hands on into the barracks from nearby taverns. Three cadets planning to buy a half-gallon of whiskey got overexcited and bought two gallons, while another got hold of a gallon of rum.

On Christmas Eve, everyone got extremely drunk and chaos ensued. Windows were smashed, furniture was destroyed, bannisters were ripped from the walls, fights were had and shots were fired. There were black eyes aplenty, and a lieutenant trying to quell the riot was punched unconscious. Christmas Day was spent mainly drunk. A subsequent inquiry concluded 70 people were involved in the riot, and 20 cadets ended up being court-martialed.

(This exchange probably took place, and was undoubtedly hilarious in the vaguely British accents of the time: “We’ve taken all these eggnog-covered idiots and locked them up.” “Custody?” “Yes they are, from the eggnog.”)