If you saw that President Trump retweeted a random supporter’s harebrained proposal for controlling the spread of coronavirus, you may have gone through a few reactions. For me, it was this sequence:

For Trump, the fear of contagion and a domineering ethno-nationalism have been inseparable from the start (with 40,000 cases of COVID-19 confirmed in the U.S., he’s still tweeting “THIS IS WHY WE NEED BORDERS!”), and it turns out there’s a readymade ideology to suit this apocalyptic blend. We catch a glimpse of it whenever the president falsely claims that his country has “among the cleanest and sharpest — crystal clean, you’ve heard me say, I want crystal clean — air and water anywhere on Earth,” despite rising pollution tied to his dozens of toxic environmental rollbacks.

As with all elements of this regime, the facts don’t matter, but the illusion of exceptional purity does. Yet it appeals to green-minded liberals as well as the fringe right.

With quarantine lockdowns in effect around the world, we’re facing a surge of content like the tweet above: misleading reports of wildlife recovery, vanished smog and sudden equilibrium in natural systems. They’re never linked to a credible source, because the pictures and videos are either not from the area mentioned (those dolphins, for example, are swimming in the Mediterranean, off the coast of Sardinia) or simply unexceptional (some have said that swans are an irregular sight in Venice canals when, in fact, the birds have long frequented certain waterways of the city).

These posts, in their starry-eyed wonder and optimism, also gravely distort the time-scale and mechanics of human-accelerated climate change; they give the erroneous impression that by staying in our homes, we can more or less “cure” the planet overnight. The reality is that our climate takes at least 40 years to react to carbon and methane emissions — what you see outside today is, in that sense, a more meaningful reflection of what went on in 1980 than our current pandemic conditions.

Lastly, we see a chilling deduction: People, not the virus, are the disease. Everything would thrive without us.

This is where viral untruth and a weak grasp on science tip us into a vein of thought criticized as “eco-fascism.” The philosophy animates our favorite pop cultural antagonists, from Thanos, the Avengers’ ultimate nemesis, to Agent Smith of the Matrix trilogy. Many get a dose of it when learning about Thomas Malthus, the economist who warned at the end of the 18th century that population growth would continually outpace that of food production.

His work would inspire the likes of Stanford entomologist Paul Ehrlich’s 1968 bestseller, The Population Bomb, which predicted imminent cataclysm on the same grounds and preceded a global wave of human rights abuses aimed at curbing fertility in developing regions, including millions of forced and unsafe sterilizations. Ted Kaczynski, better known as “The Unabomber,” concluded in his terrorist manifesto that murder was the appropriate response to industrialized society’s encroachment on “wild nature,” and his thinking remains influential; the men responsible for 2019 mass shootings in Christchurch, New Zealand, and El Paso, Texas, expressed such views, with the Christchurch killer self-identifying as an eco-fascist, writing that “there is no nationalism without environmentalism.” The El Paso murderer argued that “if we can get rid of enough people, then our way of life can be more sustainable.”

Once you affirm that reducing our species is the way to endure, you’ll have to decide who’s expendable — and that’s where racism comes in handy. Maybe it’s Muslims who have to die, or Mexicans. Either choice is bound to appeal to Trump, who has lately come to refer to the coronavirus as a “Chinese” virus, reframing the threat in xenophobic terms that have already put Asian-Americans in danger. When the El Paso shooter referred to “our way of life,” that “our” was coded to indicate an all-white “us,” finally rid of the multiculturalism and demographic drift that supposedly exacerbate environmental crisis.

“Eco-fascism in its most extreme form,” note the editors of the Encyclopedia of Religion and Nature, “links the racial purity of a people to the well-being of the nation’s land” and “calls for the removal or killing of non-native peoples.” Thus do historians trace its influence in the evolution of Nazism and movements that followed. 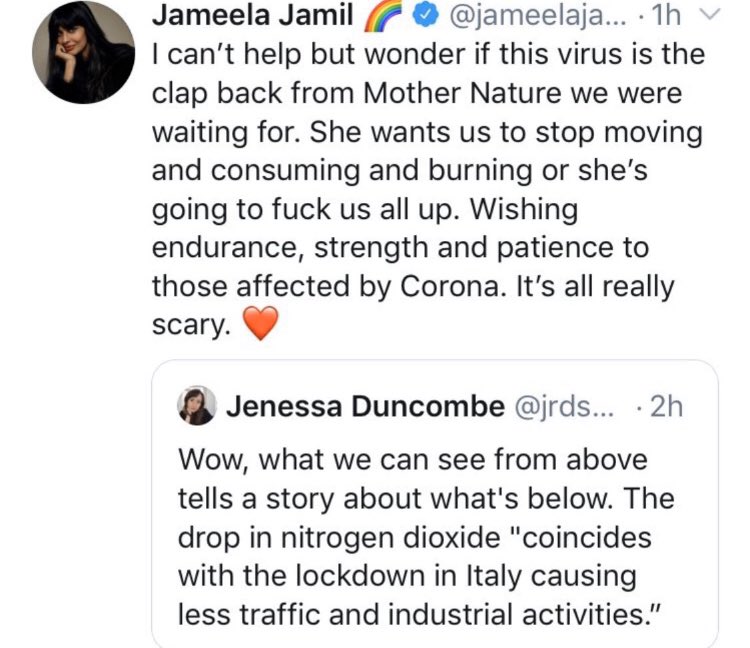 It’s important, however, to locate the seams between eco-fascist politics and hazardous naïveté. A tone-deaf celebrity describing coronavirus as a “clap back from Mother Nature” isn’t the same as a prominent voice advocating a genocide in the interest of saving the polar ice caps. In Current Affairs this month, climate scholar Samuel Miller McDonald cautioned that what we’re apt to label eco-fascism is often just depraved or clueless market liberalism — that our whole economic reality is predicated on these principles of displacement and extermination, and that so-called progressives have commonly pleaded for eugenicist, authoritarian policy.

What’s scary with eco-fascism, then, is that it’s in the water, so to speak, and it derives from purposes we may easily accept as noble. Think of Bill Gates, in his role as philanthropist billionaire, saying that a youth boom in Africa could worsen pandemics — questionable language in and of itself; next, imagine the kind of talking point Trump and company would fashion from it.

Humankind will need to adapt in the decades of ecological havoc to come; there’s nothing controversial in saying that. Shifts in climate have already affected every corner of the biosphere. The fear is that white supremacists may increasingly appeal to “lifeboat ethics,” the neo-Malthusian notion proposed by Garrett Hardin, a 20th century scientist who railed against immigration and refugees as parasites who would take civilization down with them. If an electoral base is convinced that for some to be saved, many must drown, they’ll also accept the cruelest methods for enforcing that grim choice. What’s more, they will automatically regard themselves as the rightful survivors, infusing their bigotry and hate with environmental concern.

That’s what “America First” has always been about. It’s not only that the U.S. must secure its advantage before other countries can meet basic needs. It’s that “America” isn’t a place, but rather a select group of people within that place — the ones poised to pull up the ladder behind them, kicking at any desperate hand that finds a grip.