‘You can smell the oyster essence through each bite, but once in a while, you get a big hunk of oyster, and as a kid, that flavor was just mind-blowing’

Nathan Allebach is a social media wizard who went viral last year as the (extremely millennial) voice of Steak-Umm. Born and raised in a small town outside of Philadelphia, Allebach is also an internet culture writer and hosts the What’s Really Good podcast. He’s the eighth in a series of men we’ve interviewed about the dishes that — either through nostalgia or comfort — fill the soul.

I’m always attempting to try foods that seem weird to me. If someone’s presenting some bizarre dish at a restaurant or at a party, I’m the first to think, “Let me try that.” Looking back, that really developed on my dad’s side of the family with his parents.

I grew up in a little town, Souderton, that used to be a lot more rural. It’s populated with, and influenced by, the Pennsylvania Dutch, so I have that old-school Germanic heritage. Our area isn’t Amish like in Lancaster, which people might be more familiar with. It’s more like Mennonite, Quaker and Anabaptist people. So growing up, I remember most meals with my parents were pretty normal: chicken, vegetables and starches. There wasn’t really anything exotic.

Unless, of course, my dad’s parents, Nana and Bubbie Pop-Pop, were around. They lived not far from my childhood home, in this super-old 1700s farmhouse. There were very tight, small rooms, and my Nana had all these hanging baskets everywhere. It was full of antique furnishings. The backyard, where I gained a lot of my first scars playing around, also held this big garden. We’d always go pick vegetables out of there, and they’d host big family dinners every few months.

In particular, there were a lot of seafood dishes that I wasn’t used to eating anywhere else. I still remember the first thing we had before dinner got started — everyone would gather around the little island in their tiny old kitchen, and there would be cans of kippers, or herring, out on the table. Everyone would be cutting hunks of kippers out of the cans and putting them on saltine crackers. At six or seven years old, I thought that was the coolest thing.

The thing was, though, Bubbie Pop-Pop had a stroke shortly after I was born. So the version of him that I remember is the one that was in pretty bad shape and couldn’t really walk. He’d watch the family gatherings from his wheelchair — one end of the dinner table was always his spot. I’d sit next to him, and if he was in the mood, we’d all listen to him tell stories. Other times, he could be a quiet guy, sitting silently.

Family members all had their favorite stuffings, and again, seafood was a big common thread. Raw oysters were an especially big thing, and my dad and his three brothers would be out shucking them fresh all through the night. Nana used them in her stuffing, and it was such a fun alternative to normal stuffing. You can smell the oyster essence through each bite, but once in a while, you get a big hunk of oyster, and as a kid, that flavor was just mind-blowing. It probably destroyed my reality as a kid!

Bubbie Pop-Pop passed a few years ago, but Nana is still around, in her late 80s. She makes the oyster stuffing once a year now. It’s still the family fave. I’m a very somber, nostalgic person in my free time, and I get a lot of feelings about this dish when I visit my parents. As they’ve gotten more successful in their own business, they’ve been able to afford renovations. Part of that has involved moving my grandmother into an in-law suite of sorts — our old garage. Basically, we relocated the whole farmhouse into this small one-bedroom space.

I know, too, that when I visit Nana, our garage certainly feels like her old house. It has all these smells still imbued in her belongings. The farmhouse had a deep cellar with that dank old smell, and it wafted up and mixed with everything in the house. So just visiting Nana now invokes the memory of being at a family dinner in that old space, watching my dad and his brothers and everyone getting energized. That’s when I get the feeling of, “Oh my god, just shove a fat chunk of oyster stuffing in my mouth.” 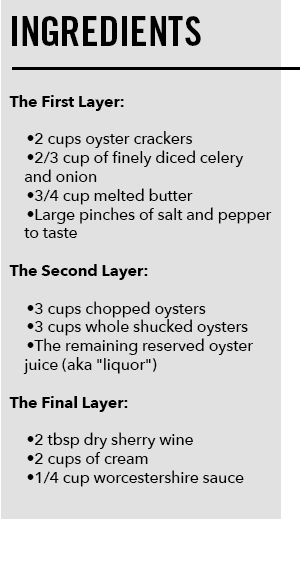 Layer the ingredients in a medium-sized casserole or other baking dish — you want it compact enough to give some height to the stuffing.

Heat the oven to 350 degrees, then slide in the stuffing and bake, uncovered, for 30 minutes. If it starts to look dry on the surface, drizzle on a little more cream.

(Note: Could you theoretically use more affordable pre-shucked oysters for this? Sure. Is it way better with live oysters you open yourself? Absolutely. Here’s a guide to the latter.)