Shawn Pham is a chef in L.A., currently cooking at the critically acclaimed bakery and restaurant Fiona. He came up through a series of European-leaning fine-dining restaurants, but has in recent years fully embraced his Vietnamese-American heritage, often cooking modern takes on classic flavors from the motherland. He’s the fourth in a series of men we’ve interviewed about the dishes that — either through nostalgia or comfort — fill the soul.

My mom’s been making Mì Vịt Tiềm, or duck noodle soup, as long as I can remember. It was always kind of a special occasion dish, just because it was labor-intensive. It might have been for special guests coming over to the house or some sort of celebratory occasion, that type of thing. It’s hard to find here in America — you can’t even find it in L.A. But it’s a very popular dish in Vietnam, where duck is almost as common as chicken.

The dish was kind of mysterious to me, because a lot of ingredients were unfamiliar when I was young. They’re even a little unfamiliar to me today, though I do know how to make it now. It’s a Chinese-Vietnamese hybrid, in the sense that the origins are in China, but it’s been adapted and modified. What remains from the tradition is a lot of medicinal ingredients. As a kid, I would always ask, “What am I eating? What’s in this?” My mom just told me, “No, it’s healthy for you. It’s good for you.”

Of course, that’s what she said about everything she gave me. But the flavor made me curious. It was the one dish I kept requesting for my birthday, for instance. Eating it just triggers this feeling of being nourished by my mom.

A few years ago, my mom did a pop-up at Simbal, my old restaurant. I asked her to make the soup because it’s very unique, and most haven’t had the chance to taste it. Ever since, people have been asking me for it. “Can you make it? Can you make it?” The issue was, I didn’t know how. So about three months ago, I asked my mom to teach me. I went to her house in Orange County, and she laid every ingredient out for me to see. I took pictures of everything so that I could find them in a store.

I’ve been cooking professionally for years, but I was honestly intimidated to make this dish because I was unfamiliar with sourcing these 10 different speciality herbs and flavorings, including this tar-like paste called rehmannia, which is what gives the color to the broth. Everything has to be bought in Chinatown. But it’s the kind of stuff everyone overlooks, and that’s why I love it. I remember when I was at the store buying the ingredients, the cashier asked me in Vietnamese, “What do you do with all this stuff?” I told her I was making duck noodle soup, and she was like, “Seriously? I don’t see it outside of Vietnam.”

Admittedly, it’s a tough dish for people outside of the culture to crack. That makes me even more inclined to do it, though. I realized that my mom is getting older, and I thought, I really have to learn so it doesn’t get lost. I don’t want to regret not learning it. After all, my family, my younger sisters, we all grew up eating it.

Now, I’m starting to wonder where my mom learned it, and how it came into her repertoire. I’m at a point where, when I make it, there’s a weird connection to my mom that I’m kind of re-enacting, in a way. It’s like going back in time to see where they grew up, back to their old house, except it’s through the act of cooking. Retracing their steps, I guess.

Oh, and she’s tasted my version. She thought the broth needed to be darker.

A word of warning: If there ever was going to be an Eat Your Heart Out recipe that’s a bit much (and expensive) for a home attempt, it’s probably this! But for those of you who want the challenge, this recipe is a simple hack based on Pham’s version. Also, there’s no practical way to make a single portion of the soup, so gather a few people at the table (or just have leftovers). Or just visit Fiona, where Pham is cooking it for the dinner menu. 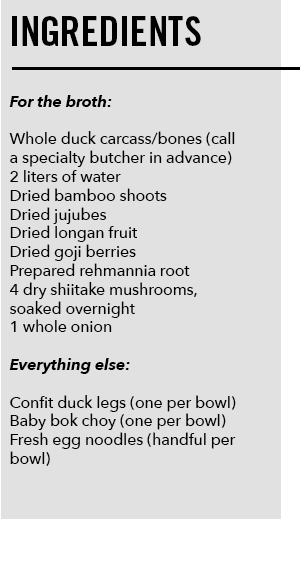 The best way to gather all the esoteric medicinal ingredients is to go to a Chinese market in your local Chinatown, or another Asian speciality store. You’ll only need a hefty pinch of each of the dried fruits and bamboo. Similarly, you’re most likely to come across duck bones at a speciality butcher, perhaps the same place that sells pre-cooked confit duck legs. (If you’d like to try this entirely from scratch, buy a whole duck and confit the legs yourself.)

The night before you start the broth, toss the shiitake mushrooms and a handful of bamboo shoots into separate bowls of water. They need to rehydrate, and you’ll want to specifically massage the bamboo and change its water to soften the shoots and mellow out their funky smell.

Begin the soup by taking your duck bones and chopping them with a heavy knife into roughly uniform hunks. Add to a large pot with the whole onion, cover with the water, and bring the pot up to a gentle simmer. Cooking the broth will take between 4 to 6 hours, depending on how much time you have.

In the final hour, however, add the rehydrated mushrooms and bamboo, plus generous pinches of the dried fruits. Be careful with the tar-like rehmannia root — you just want a small thumb-sized chunk to color the broth a lovely ruddy mahogany.

Finally, taste the broth and add salt to taste — a potful of broth will require more than you think, likely several heaping tablespoons. Pepper is also a popular seasoning for this dish. Ultimately, you’re looking for a broth that’s savory and lightly sweet from the dried ingredients.

Time for assembly! In a small pot, heat enough water to blanch the egg noodles and baby bok choy. Then place a small pan over medium-high heat and lay in the confit duck leg, skin-side first. Since it’s already cooked through, you just want to get the fat melting and the skin crispy. When it’s browned on the skin side, flip it and cook until the meat is warm through the center, lowering the heat if necessary.

Lastly, drop the egg noodles and bok choy into the boiling water. It should take only about a minute or two to cook, at which point you strain the noodles and veg and drop it into a bowl. Cover with several ladles of broth, then lay the duck leg on top. Eat.