Eat Your Heart Out: Chicken Tinola

‘Every time I go home to the Philippines, I realize that I can’t quite replicate the flavor. I think it’s the chicken; they’re a lot smaller and leaner in the Philippines.’

Charles Olalia is the chef and restaurateur behind L.A.’s critically acclaimed Ma’am Sir, where he melds the Filipino flavors of his upbringing with the creative finesse of his fine-dining career. He grew up in the Philippines and planned to be a doctor; now he’s a force in American-Filipino movement. Olalia is the 13th in a series of men we’ve interviewed about the dishes that — either through nostalgia or comfort — fill the soul.

I remember eating chicken tinola as young as seven years old, when I was growing up in a province about an hour north of Manila. Our family cook would make it — well, we have two people, a man who’s been with the family for 40 years and a woman who recently retired who was with us for 50 years.

That’s very old world of the Philippines — to have hired help be a part of the family for so long. But it was always there, always part of the culture to hire people if you’re middle class or upper middle class. My parents were around when I was growing up, but so were they, for every occasion.

One of my dad’s requests was to have four entrees on the table — whether it was breakfast, lunch or dinner. As a kid, though, it was just whatever. I knew there was always hot food, but if there were five dishes on the table, me and my siblings still wanted instant noodles. And they’d make that for us, too. As children, you often don’t appreciate things made from scratch — you want to eat what’s popular, like some kinda takeout.

I have so much more appreciation now, because when I started cooking, I understood how much energy and care goes into it. We were a big family of 10 under one roof, so our cooks were always working. But they were never stressed. There was no yelling, no rushing. It looked easy and natural — even though they were just cooking off two stoves. The chicken tinola comes to mind in this scene because I’d watch them grab one of the chickens running around in the yard and see them butchering it, fresh for this soup. Every time I go home to the Philippines, I realize that I can’t quite replicate the flavor. It’s always better there. I think it’s the chicken; they’re a lot smaller and leaner in the Philippines.

The food our cooks made was a part of my parents’ emphasis on hospitality — it was intertwined into daily life. My parents would always invite people to the house and feed them. They made sure everyone near them was taken care of. I think the beauty of the restaurant industry is that you can only last if it doesn’t feel like work. And for me, it feels natural to try and take care of everybody; it’s an instinct from time immemorial.

My restaurant Ricebar was tiny, just me and a counter, and the tinola was always on the menu. I sold the tinola as a “bowl with a hug.” I remember saying that all the time. Some people were confused about this bowl of soup and rice, but I promised them: “Taste it, and if you don’t like it, I’ll buy the bowl off you.” It became a huge favorite. It just happened by leaning over the counter, telling them “trust me” and looking them in the eye. It’s a very old-school way of helping and interacting with someone. I miss that format now.

My parents actually wanted me to be a doctor. But I think they’re finally seeing the silver lining to all the work I’ve done in the past. With Ma’am Sir, my parents have a clear vision of the path I’m on, and they can see me reaping some of the benefits of hardship in the past.

Well, I guess you could say that it’s a blessing and a curse, because you have so much more to answer for than just your own business. But it’s something I accept. And it’s fun to go up to people and see them enjoy the food I grew up with — whether that’s tinola or anything else. 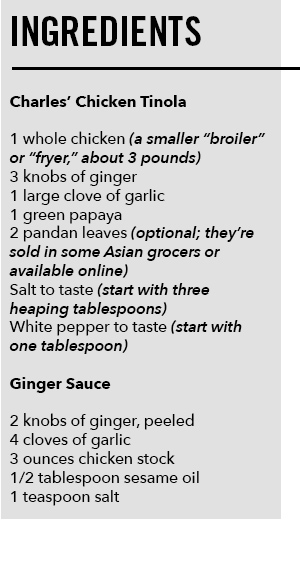 To make the ginger sauce, blend all the ingredients together until it resembles a salsa-like texture. Reserve.

Salt the chicken generously on the outside and inside, and leave to “dry-brine” for at least 20 minutes — this will draw out impurities and tighten the flesh. While you’re waiting, slice the ginger root in half and slightly crush the pieces with the bottom of a heavy pan (or rolling pin, or whatever else is within reach). When the chicken is done brining, rinse it off and stuff with the ginger, garlic and pandan leaves.

Put it into a large pot, and fill it with just enough water to barely cover the chicken. Place it over high heat. When the pot starts to boil, lower the temperature until the liquid is gently simmering. Keep it simmering for about 40 minutes.

While it cooks, peel the green papaya, split it in half and scoop out the seeds. Quarter the papaya and slice it into 1/2-inch-wide chunks. Check that the chicken is cooked: The wings should pull off easily and a hole poked into the dark meat should run with clear juices. If it is, pull the chicken out carefully and put on a platter to cool. Toss in the papaya slices and season the soup to taste. Once you can handle it without burning yourself, pick the meat off the chicken to serve in the soup. You can serve it with a bowl of rice on the side, or all in one bowl, like Olalia used to do at Ricebar. Don’t forget the ginger sauce.