Inside the Growing World of Vape Juice Home-Brewing

‘I know this sounds horribly pretentious, but for me, it's become my passion. My art.’

Kirk Teutschbein sits at one of his computers, surrounded by about a half dozen different vapes, each containing a different and specific combination of ejuice flavor Teutschbein brewed himself. “I like to have 20 different options in front of me at any time,” he tells MEL.

Teutschbein started vaping around 2012, he says, when juices were “expensive, about a dollar a milliliter, and there wasn’t a lot of variety out there.” He was going through a lot of juice — about 8 to 10 mL a day, about as much nicotine as a pack of cigarettes — and the cost started to add up.

Fortunately, he’s always been a DIY kind of guy. “I work on my cars, I work on my house, I cook — if I can do it myself, I like to give it a shot.” So when he found out that he could brew his own ejuice, he “kind of dived in.”

Within the first year, Teutschbein says, he accumulated well over 200 vials of different flavors. His collection now comprises well over 400. “It’s a bit of a rabbit hole,” he admits. “There are so many flavors out there.”

Another ejuice home-brewer, David Bellows, has a juice bar that puts Teutschbein’s to shame: 2,000 flavors. He calls it “going really in the weeds.” A collection of that size, he says, “is in no way necessary. All anyone really needs is a literal handful of flavors they like.”

Bellows has been brewing for about four years, after he grew tired of ordering custom combinations online. “It started with a company that let people pick a primary flavor, a secondary flavor and an additive or two, and they’d mix it up for you and send it. It was overpriced, and everything I picked was terrible, but it got me thinking: If they can do it, I probably can, too.”

Bellows poked around online until he found the subreddit r/DIY_eJuice. After some research, he ordered the basic supplies from one of the subreddit’s verified vendors: flavors, scale, nicotine, propylene glycol (PG) and vegetable glycerin (VG), and started mixing. “I know this sounds horribly pretentious,” Bellows adds, “but for me, it’s become my passion. My art.”

How to Home-Brew EJuice

How do you brew your own ejuice? The process is actually pretty simple — although you might need a quick refresher course in high school chemistry.

Teutschbein likes to compare it to cooking: “I like to make Indian food, so I’ve got curry powders and turmeric and all this other stuff, I’ve got 50 spices in my kitchen, because I like to make different foods and different combinations.” Ejuice is “kind of the same thing,” he explains. “I’ll see a new DIY ejuice recipe that awakens something in me and makes me think, I’d really like to be able to make that, so I go buying more flavors to mix.”

First, the nicotine. When Teutschbein first began brewing, he accidentally spilled some nicotine on himself. “I was worried I was going to die,” he says. “Pure nicotine is very dangerous if you get it on your skin. You will end up in the emergency room, and there’s a very good chance that it’s going to be fatal. It’s similar to a caffeine overdose or getting anything on your skin like that, because there’s not much [doctors] can do.”

Luckily, ejuice home-brewers don’t work with pure nicotine. It’s sold in a “carrier liquid,” meaning it’s diluted to a safe concentration. “The most I would say anybody would work with is about a 10 percent solution” of nicotine, Teutschbein says. “And if you’re working with that strength, I would definitely recommend rubber gloves just in case some gets on your skin.”

This is where the chemistry comes in, or at least a working knowledge of fractions. Nicotine strength is often measured in mg/mL — milligrams per milliliter. “I work with a 6 percent solution, and I dilute that down, so it’s very diluted by the time it gets to the actual vape liquid,” Teutschbein explains.

Bellows does the same. His 100mg/mL bottle of nicotine below will be diluted to 3 mg/mL, or 0.3 percent, in the finished combination. That means every milliliter of solution contains 3 milligrams of nicotine. 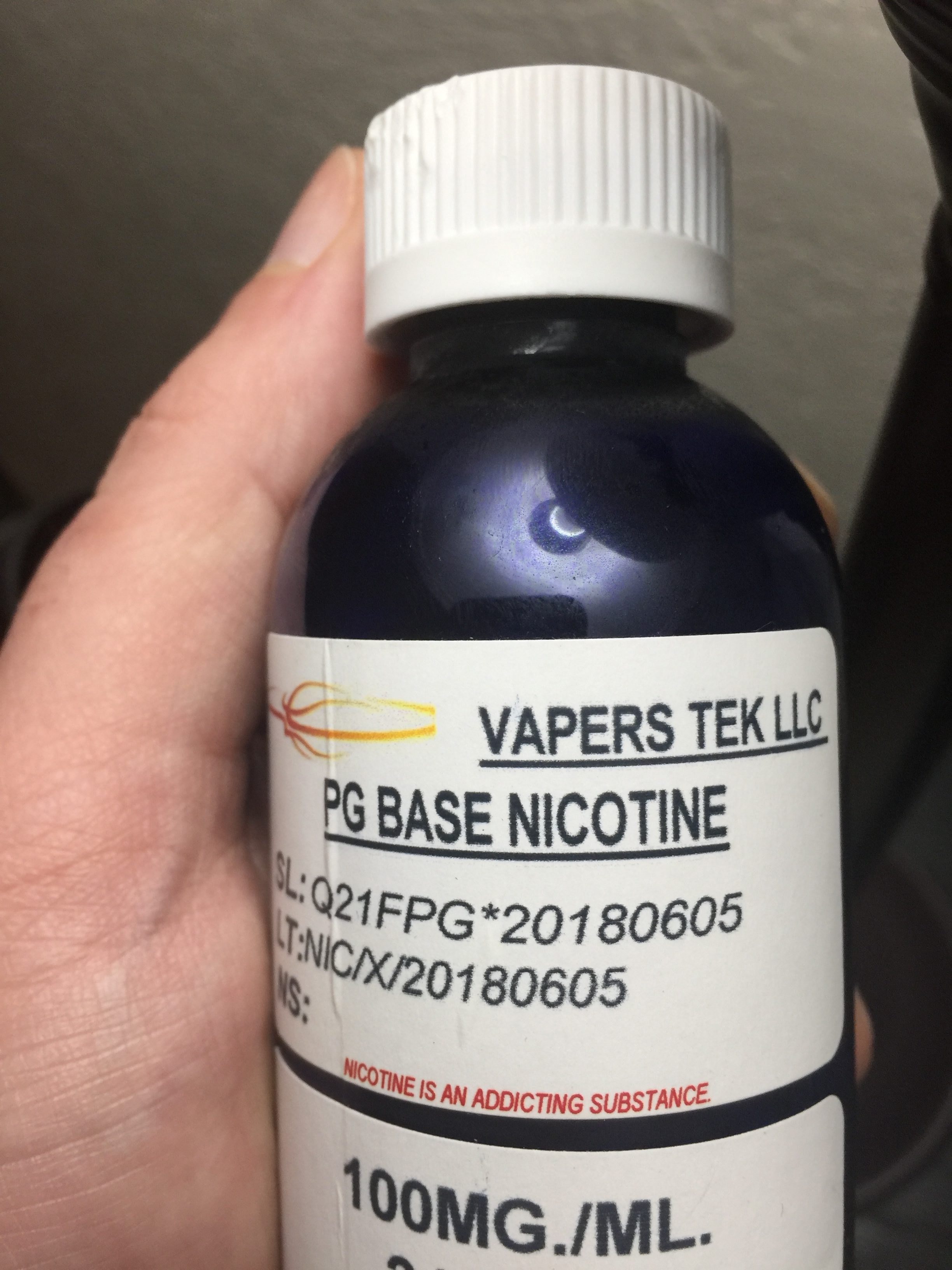 To put this in some perspective, a “5%” Juul pod packs a whopping 59 milligrams of nicotine per milliliter of liquid. Juul also enlists a different delivery of nicotine, using “nicotine salts” instead of a diluted formula like Teutschbein’s and Bellows’.

The math can get a little difficult, and Bellows says it’s much easier to use online calculators set up explicitly for home-brewing ejuice. Most of the calculators “also double as recipe-sharing sites,” he adds.

Once you have your recipe, grab your measuring tool of choice. Teutschbein prefers to measure by volume using a syringe: “Let’s say I have a 10 milliliter bottle and I need 10 percent of a flavor (which is very high). I’ll take 1 milliliter of the flavor and add that to the bottle. [I] fill it up to the line in the bottle.” 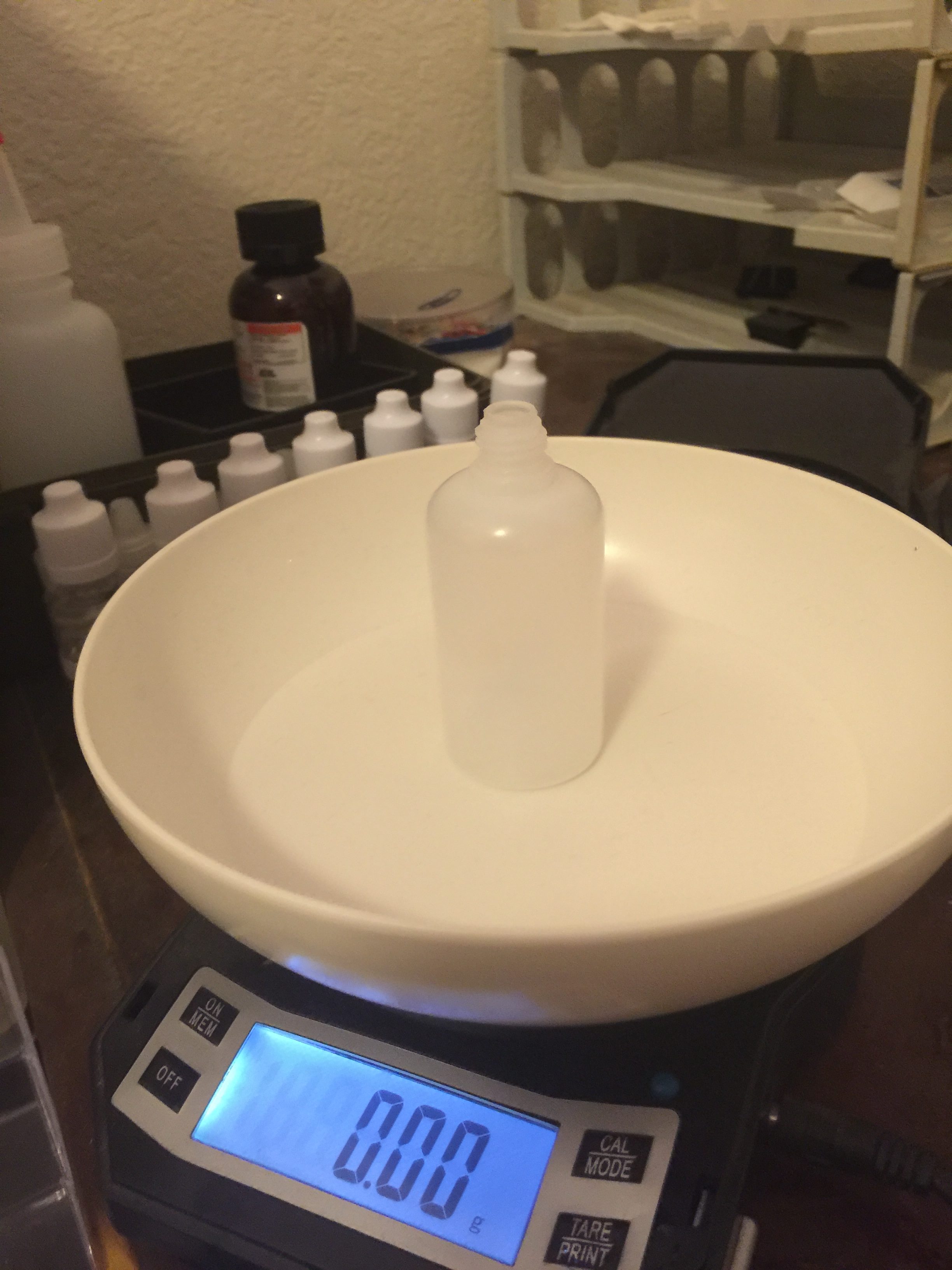 Bellows, on the other hand, opts to measure using a digital scare. “It seems natural to measure liquid by volume, but in reality you can get better accuracy measuring it by weight, which is why it’s highly recommended to use a scale that’s accurate down to 0.01 grams,” he says, “Also, there’s no cleanup. You just set the bottle on the scale and put the ingredients in. Easy. No dishes to wash afterward.”

You can buy most concentrated flavors from online retailers like bullcityflavors.com, Bellows says, “but some people do go completely nuts, even as far as creating their own naturally extracted flavors instead of just buying them, aging their juice in oak barrels, trying to perfectly perfect an obscure flavor profile for years, and all sorts of craziness. But none of that is remotely necessary.”

Once you’ve added your flavors and desired potency of nicotine, you need the final two ingredients: propylene glycol and vegetable glycerin. “Mostly we call them PG and VG,” Teutschbein explains. 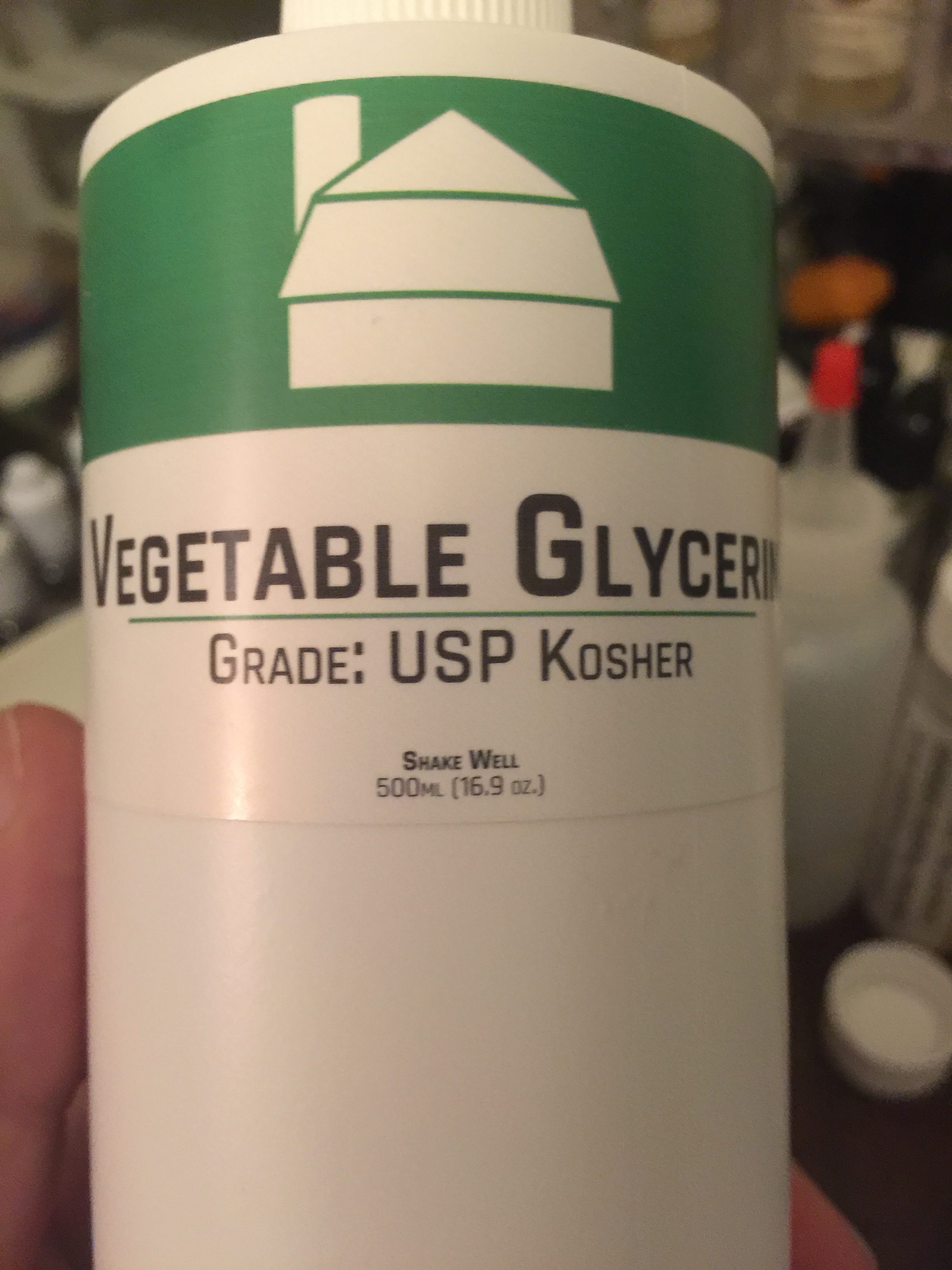 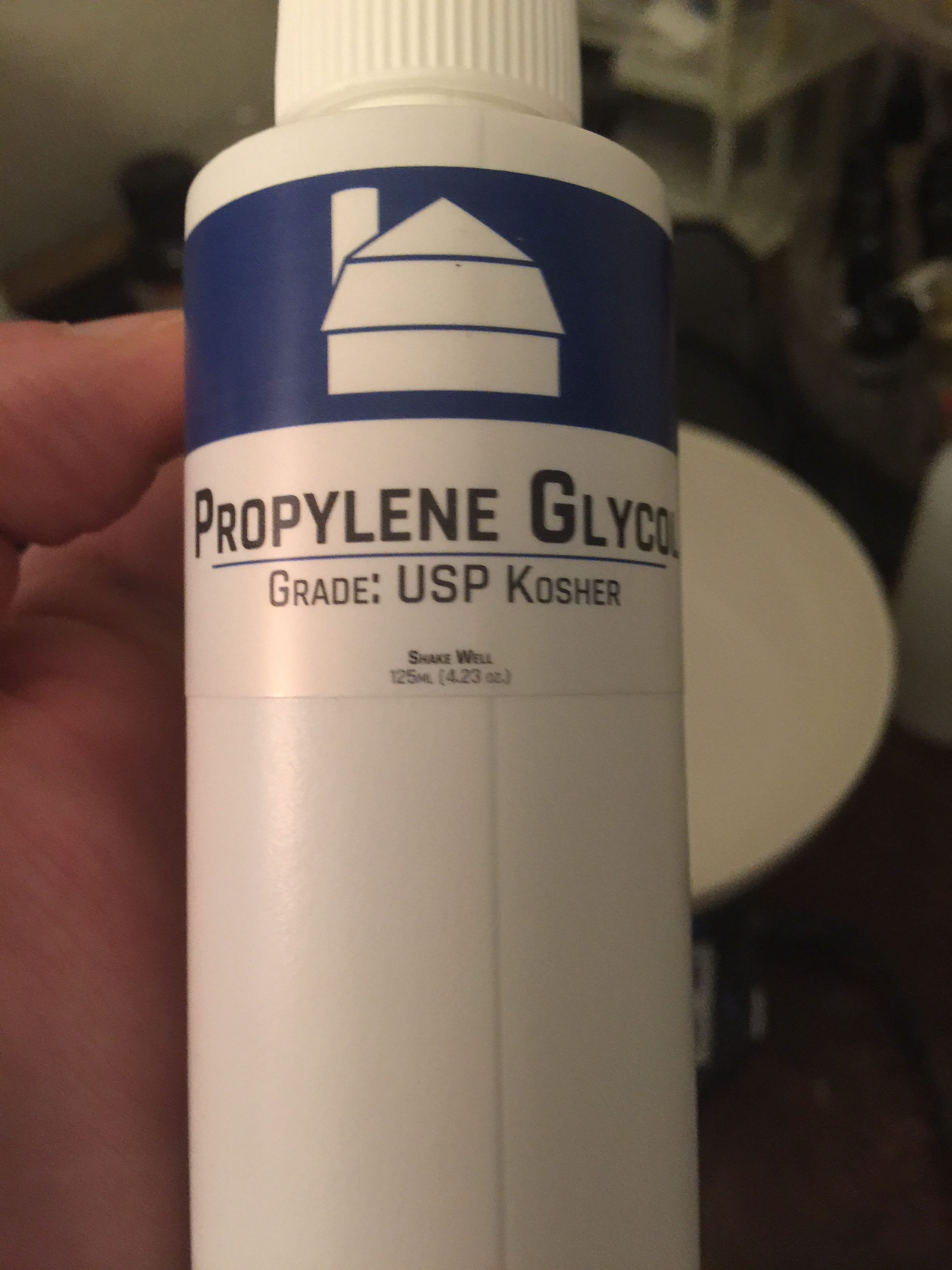 Vegetable glycerin is what makes the “thick, satisfying clouds,” Bellows says. So you can add as much or as little as you need, depending on how thicc you like your vape smoke. VG is “not a very good solvent,” he warns, meaning it doesn’t easily dissolve in the solution. This is the reason for the final step, where brewers let their solutions set for weeks or months on end, as the nicotine oxidizes and the vegetable glycerine thins. It’s like a fine wine.

Propylene glycol, Bellows explains, is the “flavor carrier.” It’s a great solvent and “thins the juice,” he says, “but makes almost no clouds.”

The final product, Bellows explains, breaks down as such:

Then it’s time to let the mix rest for a while. “I like to put mine on a little coffee cup warmer overnight,” Teutschbein says.

“Some people believe that juice that’s 2 years old is going to be somehow magical, like the nicotine will be stronger,” Teutschbein laughs. “But I’ve never found that to be the case. They call it ‘steeping,’ which is totally inaccurate. … We’re just letting the flavors blend! There’s not really any chemical reaction going on. But some people truly believe that longer steep, the better juice, and they’re willing to wait for it.” What does the old juice taste like? “Every once in a while I’ll come across the bottle that I mixed years ago and try a couple of drops of it,” he admits. “Sometimes it’s okay. Sometimes it’s nasty.”

And how long does it last? “About 2 days if I vaped nothing else, but I will vape other things because I can. It costs me less than $2 and less than 10 minutes to make that. Shops charge $15 to provide exactly the same thing.”

“The most common reason people brew ejuice is to save money,” Bellows says. “[But] there’s a new reason to add to the list: anticipation of prohibition. I don’t know that there will ever be vaping speakeasies or ejuice dealers on the corners, but several municipalities have already banned flavors, and some states have bills in committees to ban them.”

Vaping helps lots of smokers quit, but it isn’t totally harmless, and the high nicotine content in Juul e-cigarettes is getting lots of teens hooked — resulting in increased interest from the FDA.

One study in June 2018 found certain flavors of ejuice to impair blood vessel function. Another team of researchers at New York University found “evidence that nicotine inhaled from e-cigarettes could be converted into chemicals that damage DNA in the heart, lungs and bladder, and dampen down the body’s genetic repair mechanisms.” The same team found the rest of the ingredients needed to make ejuice — propylene glycol and vegetable glycerin — to be “relatively harmless organic solvents,” however.

Bellows partially credits the anticipation of a flavor ban to the consistent rise in subscribers to the r/DIY_eJuice subreddit, which he helps moderate.

“From the new mixers I’ve seen signing up to the subreddit and other forums asking for help with their first orders of supplies, people are anticipating this and getting started without waiting for a flavor ban,” he says. “If you want flavor, home brew might be the only way to go in the future.”

The Joy of DIY

The trend may be on the rise, Bellows says,  but “people painstakingly developing ejuice recipes by adding their just-right amount of this flavor and that flavor is still a pretty niche hobby.”

He concludes, “We like what we like. Most people still just want to put some flavor in some base liquid, shake it up and go. But to me, one of the biggest benefits of DIY is that it’s totally customizable.

“Many people want a particular flavor profile that no commercial juice makers provide. For example, I wanted a vape that tastes like a green-tea-flavored Kit Kat. There’s no such flavor, but I was able to take some white-chocolate flavors, some wafer flavor, some green tea flavor, and create my own.”