In many states, legal cannabis has made the eclectic stoner den a thing of the past

Let me take you back to a time — not so long ago — when buying weed legally was still quite rare, you had to “know someone who knows someone” to get acid or shrooms and you couldn’t order coke from a delivery service as fast and dependable as the drivers who pick up your fast food when you’re too lazy to leave the apartment. In these days, acquiring drugs meant entering into a fragile social contract. You and the dealer had to bond. And you’d get a significant dose of their overall vibe every time you stopped by their home, as this very accurate tweet indicates:

Ah, the pot dealer’s snake. So exotic. So… motionless. Above that terrarium, some poster art: the psychedelic mindscapes of Alex Grey, or a blacklight Grateful Dead design, either the lightning skull or the dancing bears. (The more colorful, and the more “trippy” it looked under the influence, the better.) The drug dealer may have invested their reliable profits in a state-of-the-art sound system, or every video game console, or just a giant TV for watching old episodes of Cosmos with Carl Sagan. They might have a couple of swords, or nunchucks. Lying out on the cluttered coffee table would be the stash, the plastic baggies, the scale — the instruments of their trade — but first, you have to discuss whether 9/11 was an inside job. 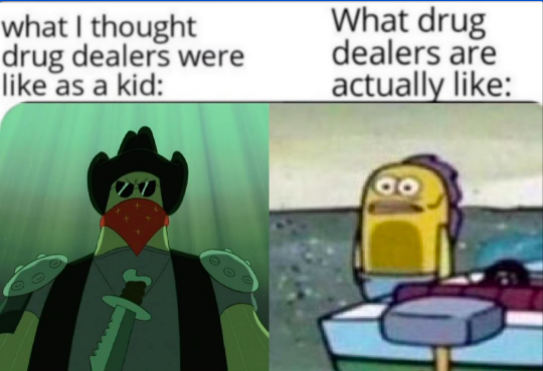 It’s true. Rather than shadowy figures lurking in back alleys, dealers were usually homebodies who hung around in their pajamas all day as a rotating cast of customers showed up, dropped a few bills and went on their way. Whether they used or not — but let’s be honest, they usually did — they tended to create a cozy, if slovenly, den-like atmosphere to put stoned people at ease, and facilitate chill encounters between regulars who didn’t necessarily know each other. Pass the bong around, a couple rounds of Mario Kart 64, and voilà, everybody’s friends. It could be awkward, but it sure wasn’t as tense or high-stakes as the standoffs in the glitzy cocaine palaces featured in Boogie Nights or Scarface. Honestly, it was more like visiting a mom-and-pop retailer.

The extent to which you demonstrated an interest in the dealer’s decor, collectibles or hobbies (decent chance they’d get deeply immersed in the world of DJ turntables) could be a touchy issue. This was the setup for Pineapple Express, a buddy comedy in which a stoner (Seth Rogen) is forced to go on the run from legit gangsters with his pot guy (James Franco), whom he ordinarily tries to avoid hanging out with. But I wouldn’t be surprised if the tokers of the generations that most relate to this dynamic aren’t now a bit nostalgic for the offbeat camaraderie of drug buyer and black-market supplier. Of course it’s safer and far more convenient to hit the dispensary; you just don’t get the bizarro commentary and bedroom warmth. Even if you and the dealer didn’t quite mesh, you appreciated them for who they were.

What’s become of this archetype? On the West Coast, where supercharged, recreational cannabis is the norm, I can only guess. And it’s true I’d never go back to a place like that one house in New Jersey where the entire floor was covered in garbage and dog food. I hope, however, that the low-level, low-key pot entrepreneurs of yore stayed out of jail and moved on to other fulfilling careers without entirely sacrificing their goofy, eclectic style and sense of comfort.

There were good times on those janky couches, doing sportscaster-like commentary for the movement of blobs in a lava lamp. I did enjoy hearing “aquatic ape theory” explained to me by a guy who heard it from someone else at a party. The drug dealer’s apartment was a nice reminder that newer, cleaner and fancier aren’t always better. It’s the stuff that feels worn and lived-in that really brings us together. To achieve a transaction. And do some drugs. Hell yeah.

I’m not sure about you, but I could see a future where weed stores do little pop-ups to recapture that old kitsch. The smells, the textures, the crack in the drywall with duct tape on it… ah, what glory. Now, if someone could help me pick the seeds out of this eighth, we’d be in business.