On Instagram and Beyond, Men With Disabilities Are Fighting for Their Right to Be Sexual

Robert Coombs was freshly out of college and working at a gymnasium in Michigan when he misfired on a double backflip. “I ended up landing on my neck and breaking it,” he tells MEL. “So, yeah, C4-C5 quadriplegic. I was in the ICU for about a month, relearning how to breathe on my own and re-learning how to swallow and eat.”

Once he was able to breathe on his own, the photography major from Kendall College was transferred to University of Michigan for rehab. There, Coombs learned how to take care of his body and, eventually, “[get] used to everything.” Everything, he says, except sexuality.

“As a gay male, that was extremely frustrating [to me],” he says. “I wanted to know, like, could I bottom? Could I top? Like, am I going to orgasm or ejaculate? And I wasn’t afraid to ask.”

But when he brought it up in his independent living class, he couldn’t get an answer. “They were like, ‘We don’t know. We don’t know what to tell you. You can watch this VHS tape with your partner.’”

Coombs didn’t have a partner. The guy he was seeing left him when he broke his neck, he says. “I literally didn’t know how anything worked sexually. So I was like, well, fuck.”

Even to this day, Coombs says, he gets messages on Grindr like, “How do you have sex?” “Does your dick work?” or “Oh, sorry, you’re really cute and everything, but it would just be a lot of work for me and I don’t know what I would get out of it.”

“People just think we lie there and do nothing, which is not true. I’ll eat the shit out of your ass and suck your dick like no tomorrow, no hands. It’s all mouth and throat. I’m very talented when it comes to my sexual stuff.”

Since those first days on Grindr, Coombs has been an advocate for disabilities and sexuality. “Before my accident, I was always photographing my body and my friends, and the LGBTQ community,” he says. “But once my disability happened, I had so much more to say. There’s little to no representation of disabilities and sexuality, so my work got so much better and more political.”

But this is where things get tricky, Coombs says. The photographer wants to create images that show “a variety of aspects of intimacy within the realms of disability and sexuality,” but this has proven near-impossible on Instagram. “In one of my images, I’m leaned all the way back in my chair and I stick my arm in between [a model’s] legs and play with their ass while I’m sucking their dick. It’s been reported so many times,” Coombs says. He’s had to crop out much of the photo.

In his constant fight to bring visibility to sexuality in the disabled community, Coombs says he’s very strategic about his hashtagging so those who are looking for it can find his art.

It’s for this reason that Coombs hashtags #disabledandcute on his posts. “I’m highly influenced by the age of the Instagay and #gaystagram and #gayboys and all this shit,” he explains. “I emulate that artwork by incorporating my disability and making it sexy, making images I want to see. Yes, my artwork is selfish, but I want to create visibility.

“And in turn, if others like me get to see a hot disabled dude suckin’ dick or embracing someone, that’s good, and that’s where the hashtags come in.” 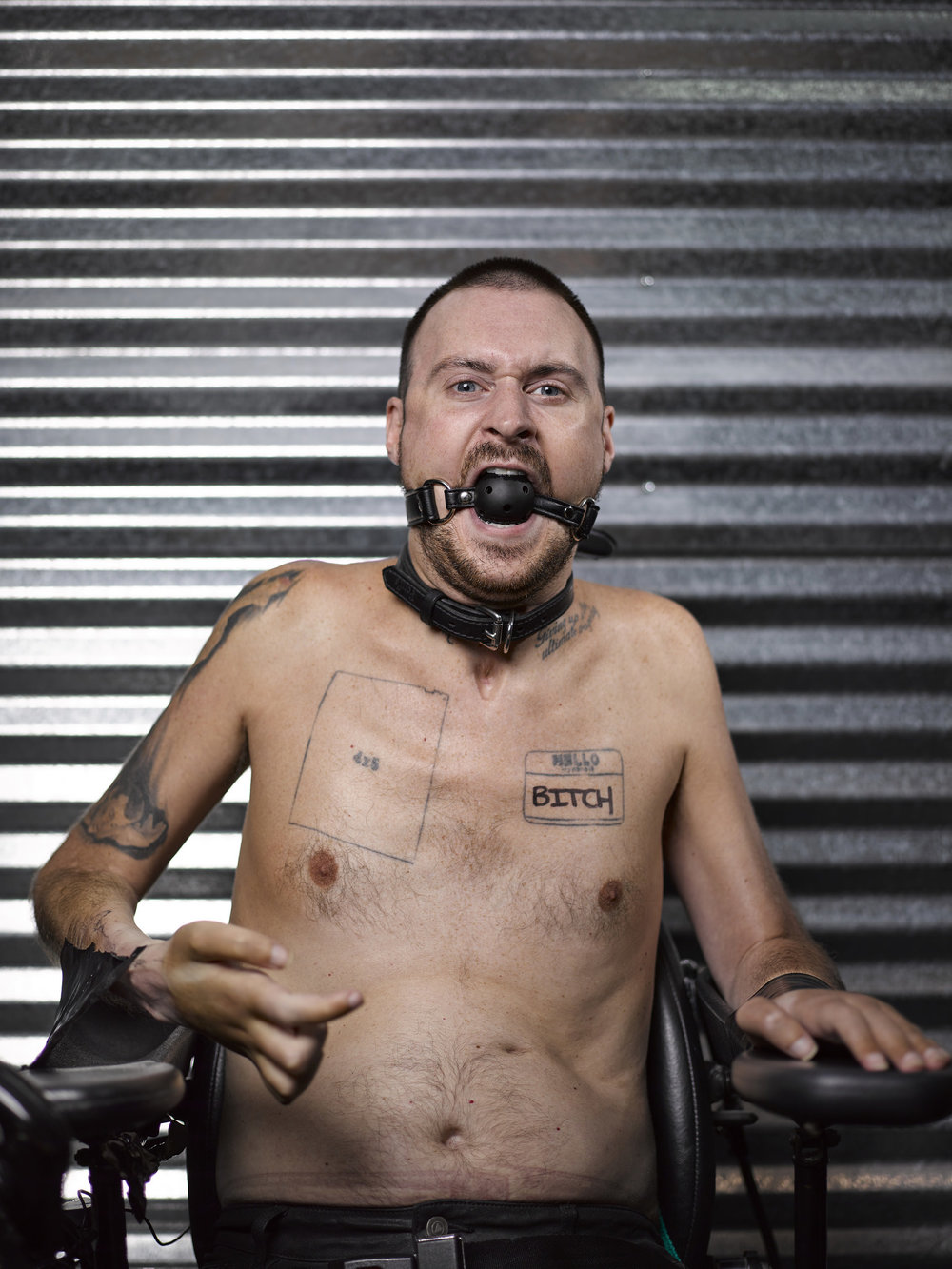 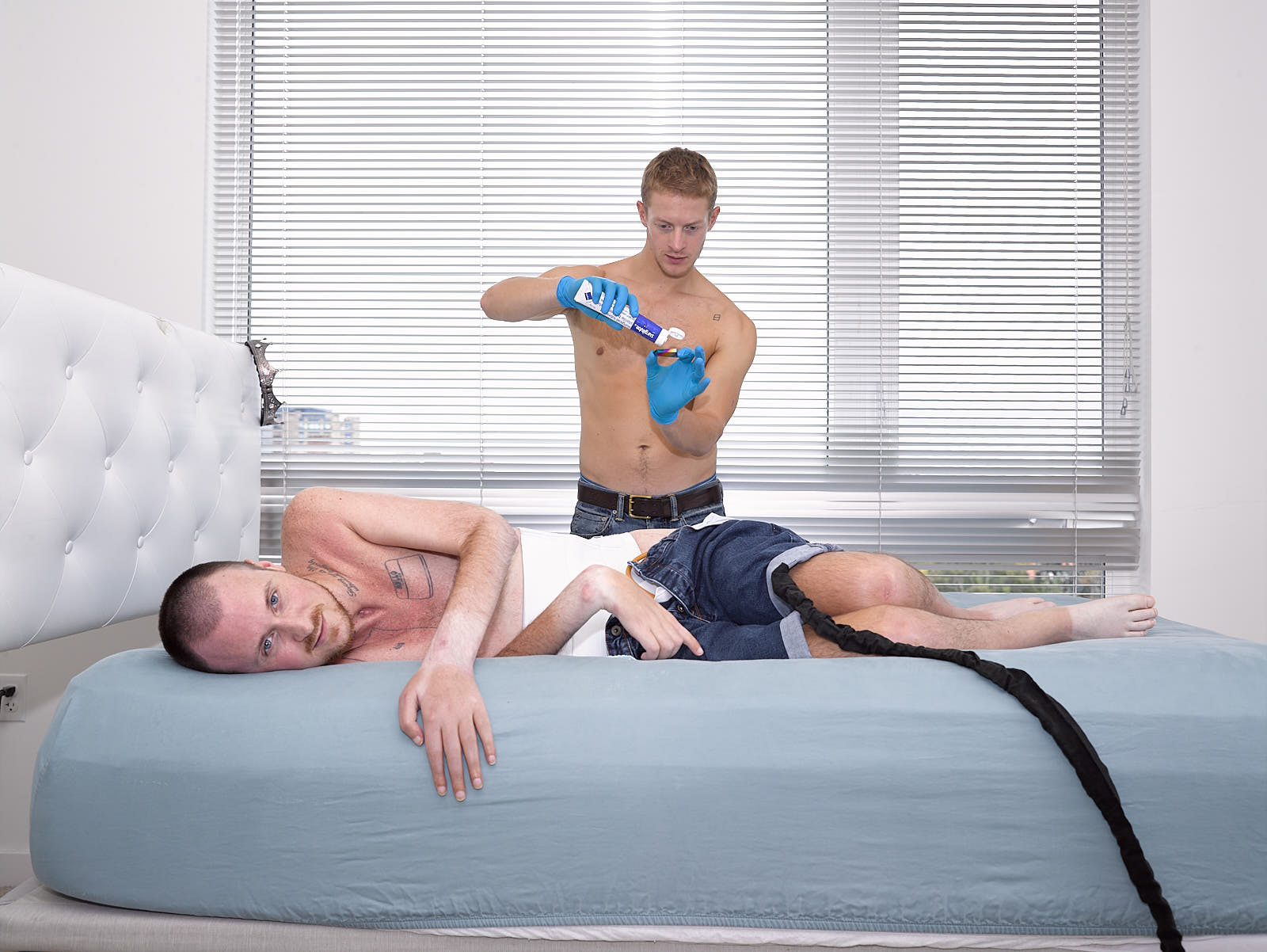 The hashtag #disabledandcute was created by Keah Brown, who was trying to shine a light on being a disabled person of color. Scrolling through the hashtag on Instagram, you might notice there’s a visible lack of men — and the many of those you’ll find are reposted by @IAmSelfReliant, an inspiration-focused account. I asked Coombs about why this might be.

“I think that the word ‘cute’ is usually attached to more of a feminine constitution,” he says. “I think a lot of men don’t want to be considered cute.” He brings up the “huge disabled bodybuilding community” on Instagram, which reflects “kind of this ableist view that men have — they don’t want to be considered disabled. It’s like a form of weakness, or something like that, because these bodybuilder dudes are fucking hot. They are very, very good looking.”

Coombs says that he thinks women are less afraid of being labeled disabled, “whereas I think men have this complex about being mortal and it’s kind of like a reality check that they’re not impenetrable.” 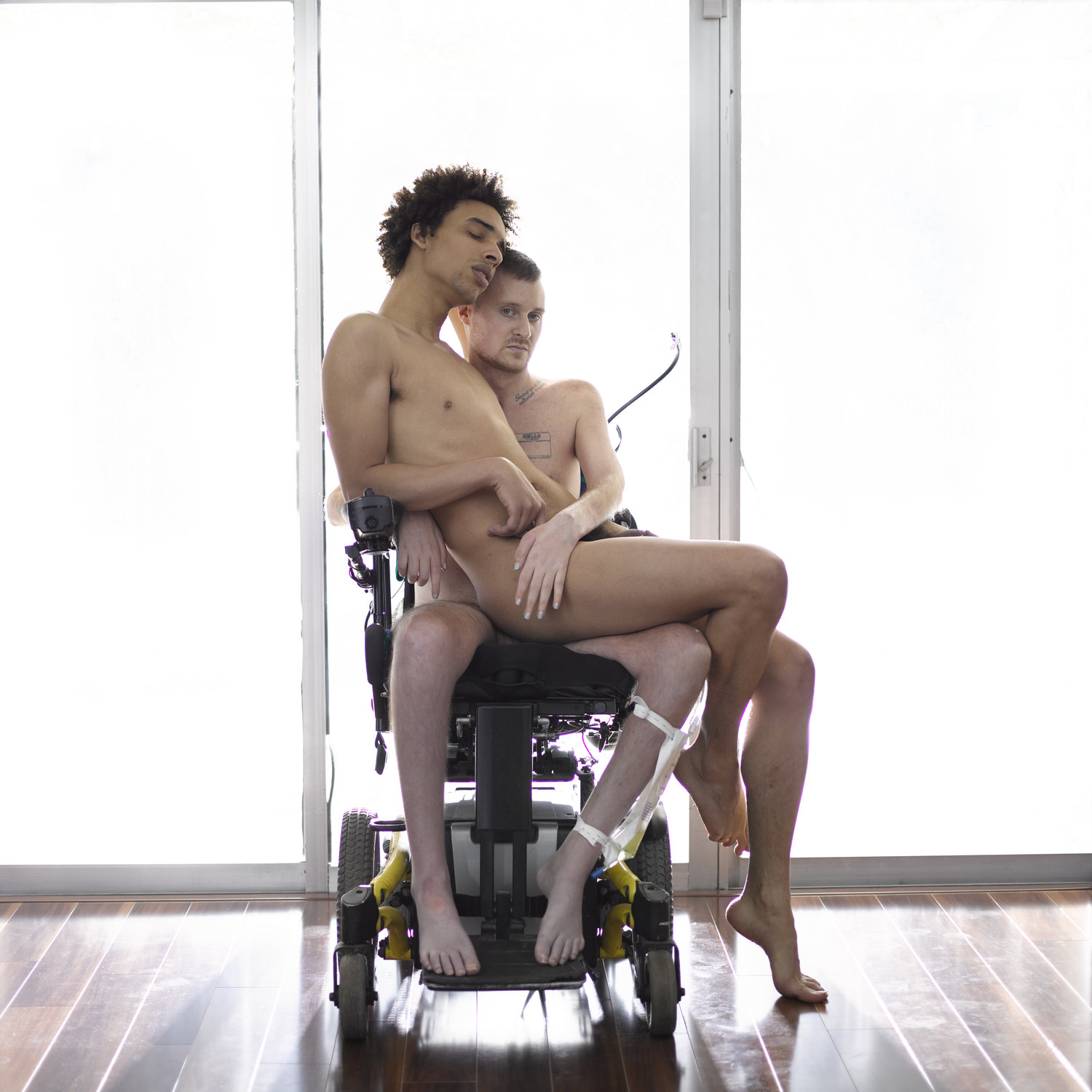 So where are disabled men to go if #disabledandcute is too feminine for them and they’re not ripped bodybuilders?

Just over a month ago, Andrew Gurza — a 34-year-old disability awareness consultant and host of the podcast Disability After Dark — was bored on Twitter and decided to search for the hashtag #disabledpeoplearehot.

“There was nothing,” Gurza tells MEL. “The hashtag had never been used, and I thought that was weird, and very rare, that it’s never once been used.” Gurza says it was an overnight hit, and he woke up to hundreds or RTs and interview requests from places like the Daily Mail.

Gurza knows Keah Brown, the creator of #disabledandcute, and loves what she did with the hashtag. And despite many saying the two should “pick one hashtag or the other” or that he’s stealing from her with his new hashtag, that’s decidedly not what he’s going for. “We should all be supporting each other because we’re all disabled trying to get recognition,” he says.

There is a difference between the two hashtag campaigns, Gurza says, “and [Brown] has spoken about the difference too. She’s like, ‘I don’t feel hot, I don’t feel sexy, but I’m comfortable using the term cute.’ Whereas I know I’m hot as fuck for myself, and I’m not going to pretend like I’m not. And if you’re a disabled person and you feel that way, why not celebrate that?”

Marcus, a 26-year-old jazz guitarist who was born with mild cerebral palsy and has a VP shunt and hydrocephalus, is one of the many people who’ve found a community in Gurza’s hashtag.

Marcus tells MEL that in “creating the #DisabledPeopleAreHot tag, [Gurza] has not only opened doors for the disability community, but also a lot of potential discussions about challenging this harmful notion that disabled people aren’t attractive.”

He adds, “There are lots of harmful notions about the disability community that I could discuss, but the one that strikes me the most is that disabled people shouldn’t be wanted by abled people. As an adult living with a disability myself, I think that having pride in your disability is a huge plus.” That confidence is “what I personally believe makes disabled people hot, contrary to society’s perception that we’re a burden or unattractive.”

Marcus says that growing up with mild cerebral palsy, he’s had his share of social struggles, “but what made me happier was knowing that I wasn’t alone, and that there were others with disabilities who shared these same experiences. Having a disability has truly shown me that it’s not just important to make the best of my situation, but to also stand up and be a voice for those in the disability community who might feel voiceless.”

Gurza has brought light to an important issue, but says there is still a long way to go — especially for men. He describes the first interview he did with “the tiny little paper in the U.K.” that first picked up a story on #disabledpeoplearehot.

Just as men struggle to call themselves “cute” and post in #disabledandcute, Gurza explains that “because of toxic masculinity, especially in our community, the disabled community, there’s a sense that to be a disabled man you have to be stoic and strong and overcome all these barriers, which is bullshit! I’m a big softie and I think that other people should be that way too.”

Gurza says that while he accepts that some people are using the hashtag to perpetuate ideas of inspiration and overcoming, he can’t help but get a little steamed. “In my brain, I’m like, Why are you doing that? It’s so destructive. I don’t want to overcome my disability. I will never be able to. So why is that still the benchmark?”

He adds, “I wish that people — whether you were paralyzed or not, or you were born disabled — could celebrate disability just as it is. And that’s what the hashtag, the podcast, everything is meant to do: just say, ‘We’re here, notice us. And I don’t give a fuck if you don’t like it.’”

Marcus says he posted in the hashtag because he “wanted to send a message to abled people that I not only exist, but I’m pursuing my dreams like my peers are, too, and that if you feel that as a disabled/differently abled person you ‘don’t belong,’ my answer is that you do.”