Desperate Incels Have Turned to ‘Chadfishing’ Women on Dating Apps

Have you matched on a dating app with an immaculately stubbled, square-jawed guy who sounds weirdly antagonistic despite your light, flirtatious tone? It could be just another fuccboi… or it could be an incel running a “chadfish” “experiment.” 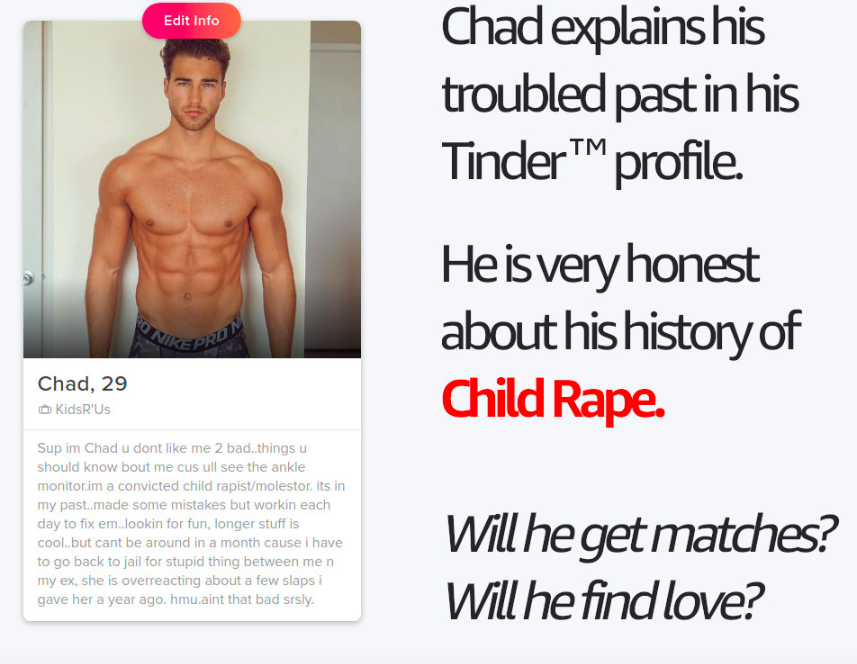 “Chadfishing” is technically as old as catfishing, since the core deceit is the kind you saw play out in the documentary (and later MTV series) Catfish. Across the internet and a constellation of social apps, people use photos of other, usually quite attractive people to lure unsuspecting marks into virtual relationships of varying sexual/emotional intimacy. Catfishers are known to have countless motives, including loneliness, boredom, revenge, financial gain and sadistic pleasure; the chadfishing incel encompasses most of these.

Ostensibly, they’re looking to prove that women are superficial sluts willing to hop into bed with any guy sporting chiseled abs, regardless of his awful personality. In practice, it’s about gaining the opportunity to verbally abuse women in Tinder chats. A 2016 thread on the ever-enlightening Bodybuilding.com forums characterizes the origins of the idea, with the author sharing screenshots of conversations he allegedly had after racking up Tinder matches with a “Chad” profile. “The cringeworthy texts are on purpose,” he wrote. “Goes to show no matter what chad sends, girls luv it.” He also posted nudes he said he received from these women, obviously without their consent. Some guys found it entertaining, while others were depressed at how easy Chad had it. Others were underwhelmed by his “catch.”

Fast-forward a couple years, though, and the chadfishing craze hits the incel mainstream, such as it is, with fairly contentious results. By late 2018, angry men had embraced the hobby as “the ultimate black pill”: proof that sex is a zero-sum game in which they will never cultivate female desire, because women are only aroused by a jocky masculine archetype (which happens to exist primarily within the altered reality of the incel mythos).

Some used it as a means of humiliating women: One ghastly incel forum, whose title glorifies raping women, features a chadfisher’s links to threads about gleefully ghosting on dates. These appeared in a forum, Looksmax.me, supposedly devoted to incels’ self-improvement, that later banned the poster for “being toxic” — which gives you a sense of the disagreements around chadfishing. Some praise it as “lifefuel,” the final validation of every asinine theory for why they’re alone, while others find it to be “suicidefuel,” proof that in dating there’s no substitute for conventional handsomeness.

Even so, this stuff will likely proliferate on Reddit’s quarantined incel board, r/Braincels, and throughout dedicated forums like Incels.co and Looksmax.me.

As with all elements of incel culture, the chadfish gambit functions as both unscientific inquiry and elaborate self-torture. What happens on Tinder, first of all, is representative of little besides the mechanisms and incentives of Tinder itself, a platform where people speed-swipe through a pool of potential hookups on the momentum of split-second visual input. That women aren’t necessarily scared off by the bios written by some chadfishers is perhaps not to their credit, but it’s also a measure of the app’s purpose: casual encounters. 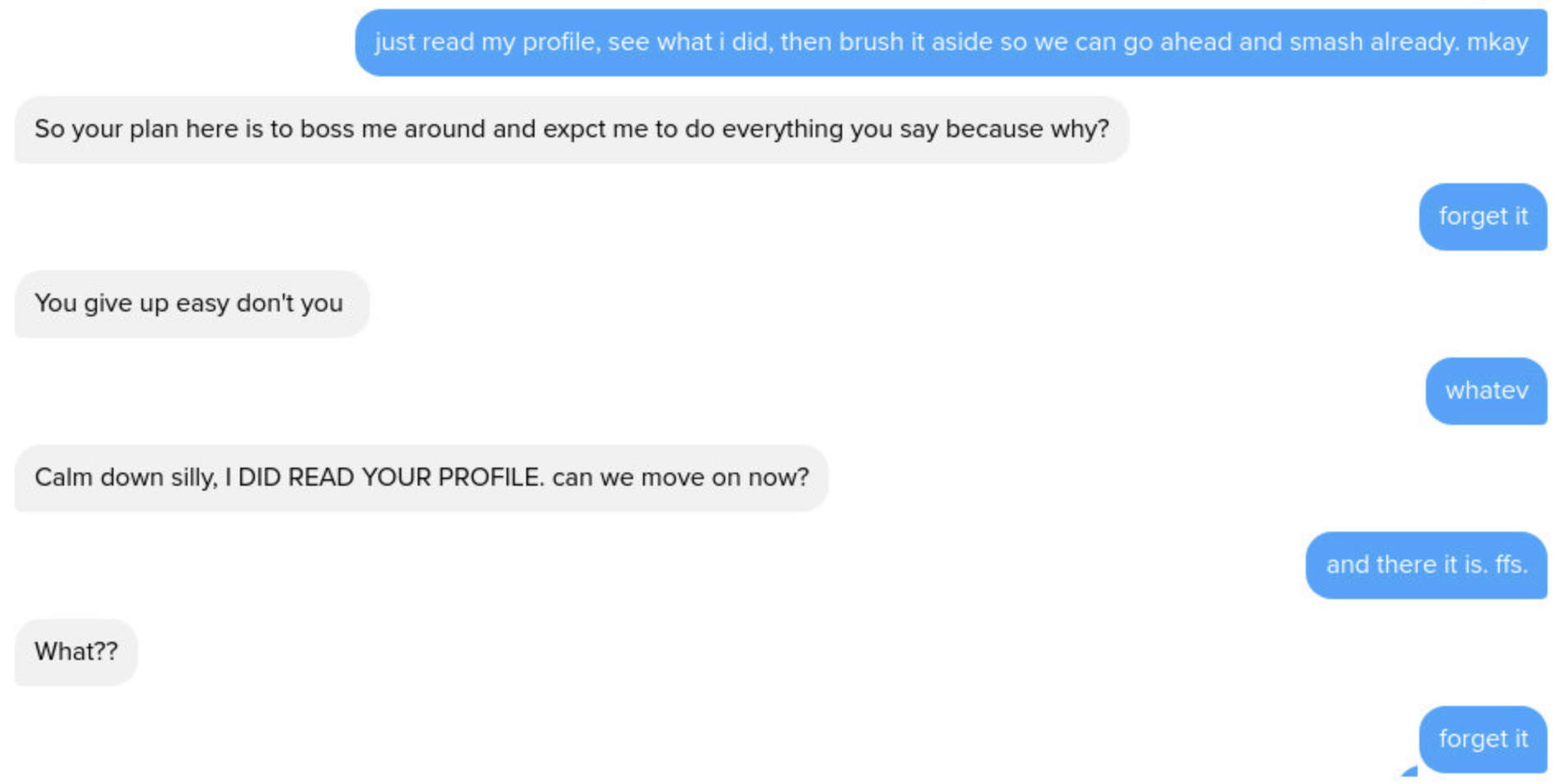 Moreover, a Tinder match or conversation hardly measures up to the fantasy of a Chad’s rampant sexual conquests, or even a normal date, as a few incels have complained. “I give them a random address or a time and place for a date and they don’t follow through,” one redditor said of the women he messages as a phony Chad. “If its my place i give them the address to random apartment complex and they stop replying now that it becomes serious. With a date i give them a restruant [sic] and time they agree to. Then i say OMW and they ghost.” An aggrieved Incels.co user whined that even as a Chad, he “can barely get anything but one-word responses.”

Meanwhile, the anguish that incels pour into the chadfish dissimulation is a steep price to pay for the meager reward of confusing, embarrassing or insulting a handful of women who had idly entertained the idea of getting laid in the near future. As befits their hopeless brand, they fall on their own sword, victims once again of the bottomless confirmation bias that powers the entire sub-lifestyle. They are seeking only a deeper, inescapable misery.

“Chadfishing is cucking yourself,” as one Incels.co user put it. That is, chadfishing is pointlessly bolstering the incel’s narrative that somewhere, somehow, a male model is fucking an ultra-hot woman who should be fucking him instead. He goes a step further here, literalizing the delusion with a fake instance of an already fictional rival.

In the end, though, he cannot be angry at Chads, because they do not exist as claimed, and to the extent that any such men are out in the wild, they are not obstacles to his interactions with women. Misogynistic hate is what keeps him in isolation, and it is the real purpose of chadfishing: The entire test is meant to show that with the right bone structure, you can treat women like shit, and they’ll love it… but the “and they’ll love it” part goes out the window almost immediately, because they typically don’t. What you’re left with is pure bile. “I have ruined womens lives by being horrible to them while pretending to be a gigachad,” one incel bragged. “Even something like calling them fat could send them into a spiral and eventually they could kill themselves.”

Doesn’t sound like a man hungry for love, does it.