Meet Braden. He Got Bored With Online Dating, So He Bought a Billboard

Date-braden.com was supposed to be a quick joke. Then it landed Braden Sharp, a 24-year-old data scientist, on ‘Today’

After graduating college and collecting a few months’ work experience as a data scientist, 24-year-old Braden Sharp was closer than ever to achieving a lifelong dream: seeing his “half-decent” smile up displayed on a public billboard. He’d saved up enough money for the $1,500 ads, but couldn’t bring himself to pull the trigger.

And then he found his inspiration: an anonymous billionaire in Utah, so desperate to find a wife that he lined the state’s highways with billboards advertising a Bachelor-style matchmaking event. It was like a capitalist fairytale of trickle-down economics.

“There was this very formal application process where he brought the top women from the whole pool of candidates,” Sharp describes. “I don’t really know what happened since with that, but his billboards got a lot of attention.” 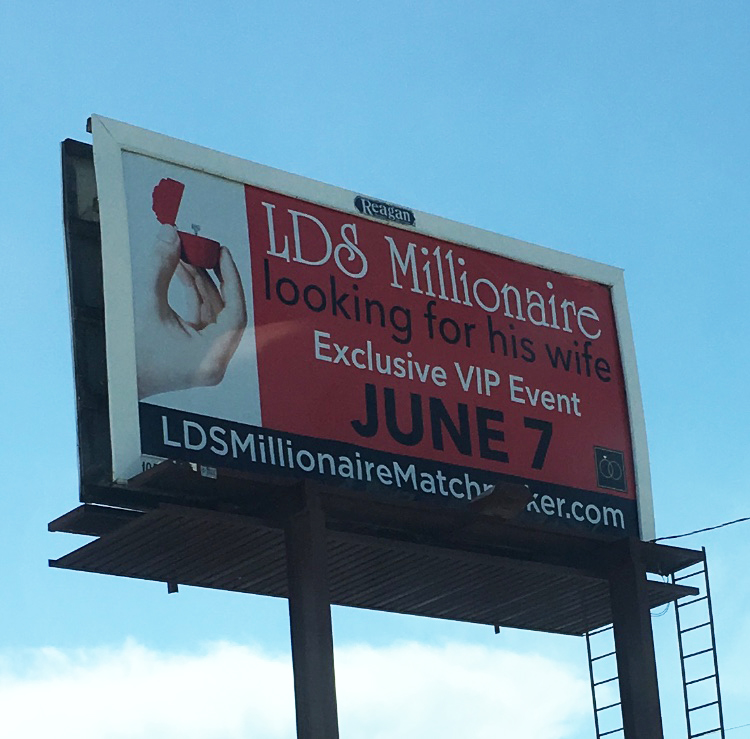 So, after years of joking about his billboard, Sharp finally caved — on the urging of his dad, who suggested that he model his stunt after the billionaire’s. “I was like, yeah, that’s a great plan,” Sharp says. “I talked to my coworkers about it too, and they got pretty hyped. So I went and made the website” — date-braden.com — and a couple days later, the billboard was up.

What was supposed to be a quick joke — something Sharp expected to make the rounds on “Utah local Twitter,” then fizzle out — turned into something much bigger.

Initially, he expected “maybe 100 responses.” But Sharp’s inbox is still overflowing with legitimate candidates hoping to date him, old women saying they wish they could date him and, of course, a bunch of creeps, he says.

But let’s take a few steps back. What kind of stunt was this, actually? Surely, he must have ulterior motives to build an Instagram following or land a copywriting job at an ad agency. Someone like Sharp, a data scientist without a Twitter account, doesn’t just go through all the extra work of designing and buying a dating profile billboard and website because it’s funny.

Here’s what happened behind the scenes.

To start, Sharp assures me that buying the billboard was just as easy as he’d always thought it would be. Well, sort of. “I had originally tried with an actual print billboard, but the people at that company didn’t take me very seriously,” he says. “They called me back almost immediately, but when I told them what I was doing it for, they just kind of ghosted me,” Sharp tells MEL. “I guess they just assumed a 24-year-old recent college graduate wouldn’t want his billboard up long enough for it to be worth their time or something, so I didn’t hear back after that call.”

Painfully aware that he wasn’t the billionaire bachelor he was attempting to parody, Sharp turned to the next best thing: an electronic billboard. Setting this up was “super-easy,” Sharp says.

Like any good, logged-on millennial looking for love, Sharp brags that he “didn’t even have to interact with anyone. I just created my account and submitted my ad. After they took a couple days to make sure it was appropriate and whatnot, it was up there!”

Was Sharp truly just parodying billionaire bachelors, or was it a genuine attempt to break free from dating apps and find a girlfriend — just buried below layers upon layers of irony? One thing’s for sure: Sharp did not expect the kind of response he got.

“I work full time as a data scientist, but the response this has garnered has kind of turned it into another job,” Sharp says. “I feel like I have to get into my inbox and respond to everyone, because these are real people who want to have real conversations… so it’s definitely stretched me beyond what I normally spend most of my time doing.”

Luckily, the response has been contained to his inbox. “I kinda wish that I had a Twitter,” he laughs, “because I probably could have grown a following. But that wasn’t the goal, so I’m not too worried about it.”

For the most part, given how big a response he’s had, Sharp says he was “genuinely surprised about how positive the response was.”

“I’ll get an email from someone in like Chicago or North Carolina or somewhere that I would never reach that’ll just say, like, ‘Hey, we just wanted to tell you it was nice,’ which is great,” he tells MEL. “I mean I expected the default response to be like, people saw the billboard, maybe go to the website, maybe think the website is funny, and then maybe like 100 people total over the lifespan of the whole thing to actually reach out.”

Something about a 24-year-old kid being honest about his plagiarized humor, mathematical competency, typing speed and overall (lack of) wealth struck a chord. Perhaps it was the stark parody to the Utah billionaire bachelor, or it was simply the good-natured prank in the midst of our current hellscape, but before he could blink, Sharp found that his billboard had blown up on Twitter, which made him worried.

“I was so nervous,” he admits. “I thought there would be all kinds of stuff about how annoying I was or how stupid the whole thing was… But I think because I made fun of myself throughout the whole website, people thought it was funny, so everyone knew that it wasn’t like me actually trying to pull anything.”

Eventually, the billboard and dating profile made it to CNN, USA Today and Today. Sharp is trying to take it all in stride.

“It has gone so much further than I thought it would. It’s a bit overwhelming, but it’s been a lot of fun too, honestly,” he says. “I’ve made a special folder of the funny ones I’ve gotten that I want to keep forever.”

And of course, at the heart of it all, beneath the layers of irony and self-deprecation, it’s still a dating ad. So… how’s that going?

“The legitimate dating inquiries I’m very behind on,” Sharp says. The legit applications are making him feel more overwhelmed than anything. “I mean, people are putting a lot of work into these,” he says. “Some girls are even making their own website to kind of mimic mine, and I want to give all of those responses the effort that they deserve.”

“Dating apps are more about the game now than actually dating.”

At a certain level, there may have been some truth to the joke. Sharp admits he is a bit frustrated with dating apps. “I feel like it’s more about the game now than actually dating — all you do is message people for a bit and then never hear back,” he says. Tinder also felt restrictive in how he could express himself, while the website allowed him more creative freedom. He could really let his personality shine through and, ideally, attract potential dates who think the same way.

Would he recommend other dudes spend their bonus checks on billboards and a website to find dates? “Well, it was definitely more expensive than a free app, I’ll say that,” he says. “And it’s a bit more work. But I’m not going to dissuade anyone from trying. It’s still a whole lot of fun. I’d do it over again in a heartbeat.”

“I went to dinner with an entire apartment of girls who thought the whole thing was funny.”

As things go on the internet, Sharp’s moment in the sun was fleeting. “The billboards came down finally a couple weeks ago after being up for a month, but I’m still getting momentum with it,” he tells MEL.

Especially after appearing on Today, he says there’s been an influx of… “you know, the kind of people who are watching the Today show… which aren’t really people in my demographic,” he says. “So that was just another fun little twist: emails from nice old women saying, ‘If I were 25 years younger, I’d go for it.’”

And there are, of course, “some creeps, and a few that I’m pretty sure are just 14-year-old boys who think they’re being really funny, and some very strange emails that I’ve deleted very quickly,” he laughs. But through all that, he’s actually landed a few dates.

“A few were just kinda playful, like not completely legitimate,” he says. “Like, I went to dinner with an entire apartment of girls who thought the whole thing was funny, and that was a lot of fun. But then I’ve been on a few that have surprised me with how much potential there is.”

Since the flow of applicants is still coming in, Sharp says he recently enlisted one of his friends as a sort of “intern” to filter through the emails and send him the best candidates. “Again, like it was not my objective to actually meet someone through this,” he concludes. “But it might actually work out, which I would not be mad about.”