Memes of the DankLeft Are Winning the Fight for Socialism

All in all, 2020 has been a weird and discomfiting year for the American radical left. Bernie Sanders got his election hopes kneecapped by establishment Democrats, and many leftists had to hitch their hopes to Joe Biden, figuring that getting Donald Trump out of office would feel like a win.

But now that Trump is finally starting to concede power, it feels like the world is falling into stagnation again, at least while everyone waits for Biden to assume the presidency and do… something. If the young revolutionary socialists and communists I met protesting out in Oakland on election night are any indication, there’s not much excitement that America can be saved as the economy collapses and Biden keeps talking about bipartisanship and unity. The right-wing cesspools online are no closer to civility, and white nationalists, alt-right ideologues and garden-variety racists appear more unhinged and visible than ever.

At least all this frustration has led to an explosion in left-wing creativity, at least when it comes to Extremely Online® content cooked up for restless digital fanbases. One of the best examples is the r/DankLeft subreddit, which celebrated its one-year birthday in May and boasts more than 130,000 subscribers.

There are only a few key rules to the page: No leftist infighting (always tempting, given how many socialist theory nerds roam here) and no promotion of pro-Democrat or pro-Republican views. This isn’t a viral platform for a handful of memes to hit big views; instead, most posts garner modest likes and then fade into the background. It’s an ever-revolving carousel, featuring a handful of distinct “genres.” Some posts fact-check capitalist misinformation with earnest rage, like this rebuttal of a “Communism Kills” infographic: 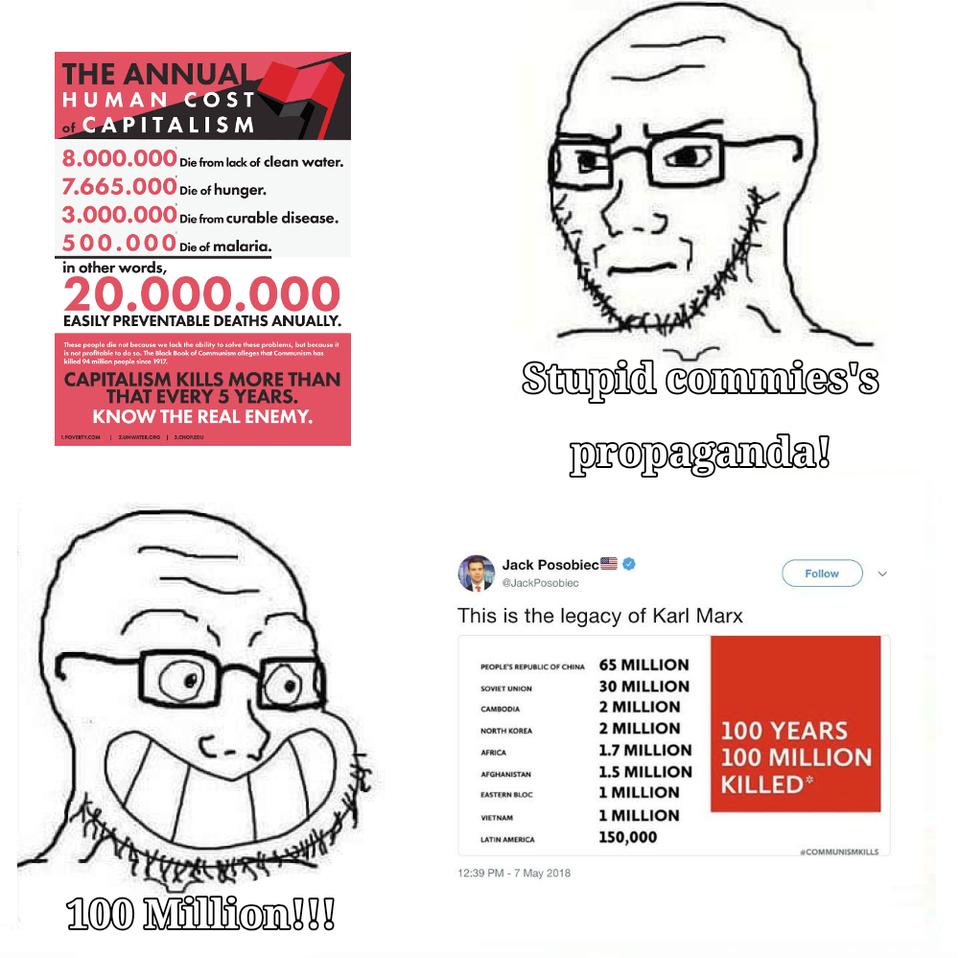 Others reference theory from historical theorists and thinkers like Karl Marx and Friedrich Engels, making winking references to core ideas like “surplus value” and wrapping them in a layer of pop-cultural sass (in this case, a righteous Bobby Hill): 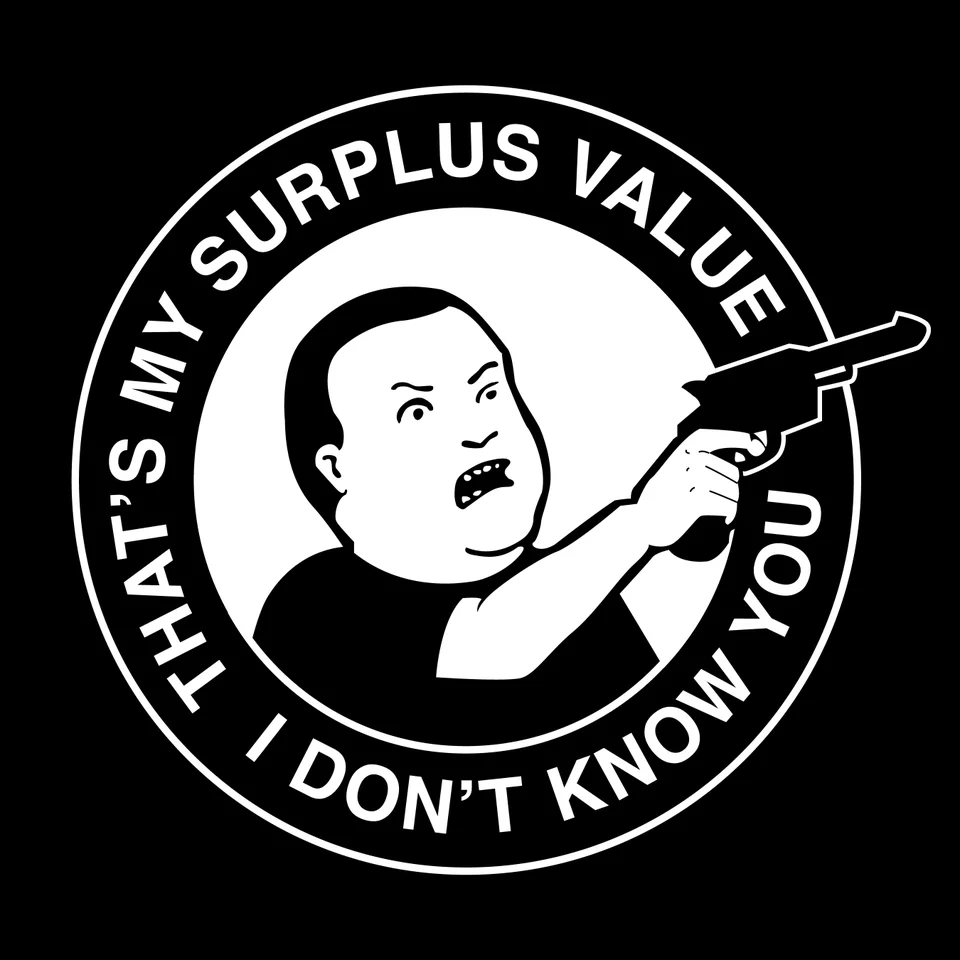 Among my favorites are the shitposts that acknowledge important figures in leftist history. It’s absolute nonsense to Photoshop a low-res clip art version of socialist revolutionary Thomas Sankara to suggest that he once declared, “The revolution cannot triumph without the deliberate forced feminization of gamers.” Thinking about the leader of Burkina Faso saying that is, to me, a fundamentally funny image; more importantly, it made me look up the history of Sankara’s experience as a political prisoner and his successes in anti-imperialist organizing. 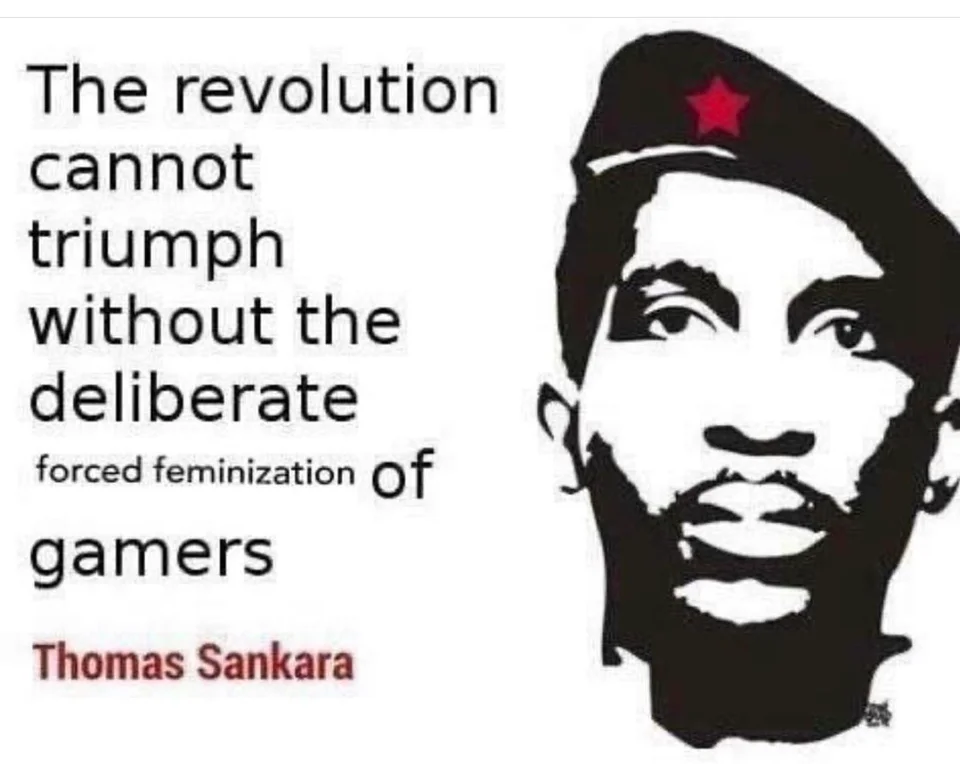 These absurd posts on Reddit and social media are worth more than just laughs — they’re radical content, influencing leftist discourse in a chaotic year. I saw the same giddy energy in the halls of the #YangGang while reporting on its meme-heavy approach to winning presidential nominee Andrew Yang mainstream support. Even before this, Sanders’ own Dank Meme Stash made waves, as did former senator Mike Gravel’s teen-led, meme-fueled campaign. The key difference is that there’s much greater depth of topic, and disagreement, in socialist meme circles — how could there not be, given the reams of granular debate on the best methods, means and expressions of this political philosophy? 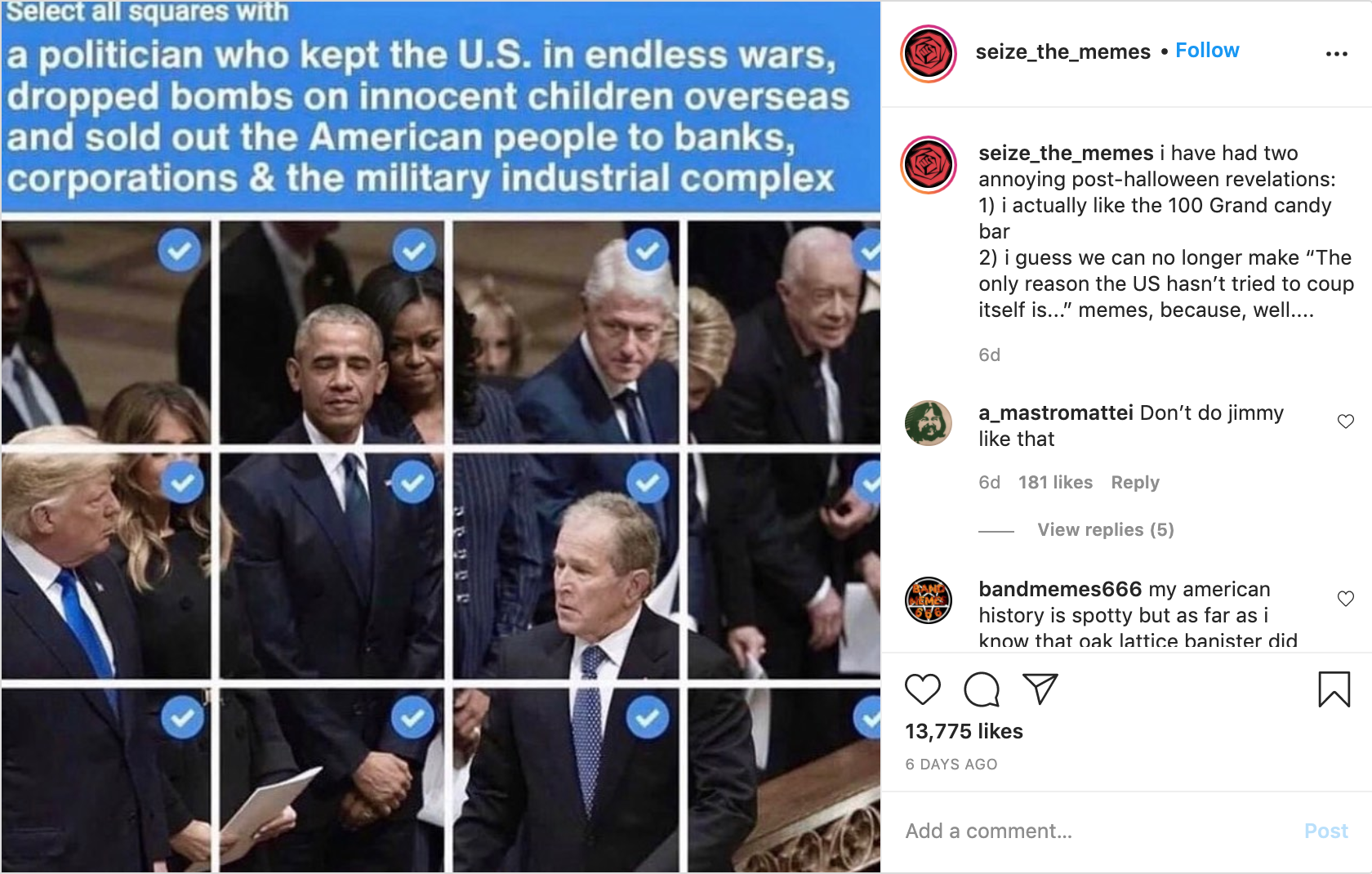 Even more so than on r/DankLeft, I see these competing tensions at play on lefty Instagram accounts which range in ideological flavor and surrealist intensity. This feels like an evolution of the so-called “dirtbag left” — you know, those kids who listen to Chapo Trap House and curse a bunch while tweeting about revolutionary philosopher Slavoj Žižek. The content is about cathartic anger (or perhaps angst), sure. But there’s also a feeling that lashing out with deeply referential humor can actually do something to change what people understand about leftism.

No wonder so many of these memes attempt to highlight the hypocrisy of the right, whether by parodying the libertarian-favorite “Don’t Tread on Me” flag or just co-opting memes once used by the right (like the word “based”). To me, the greatest value of all is that the best, most inscrutable memes can open wormholes for curious scrollers; in-jokes just naturally lead to the consumption of legitimate theory and history. You can’t laugh at this image of the aforementioned Žižek without knowing his works or at least the sound of his rambling voice, which is a meme unto itself at this point. 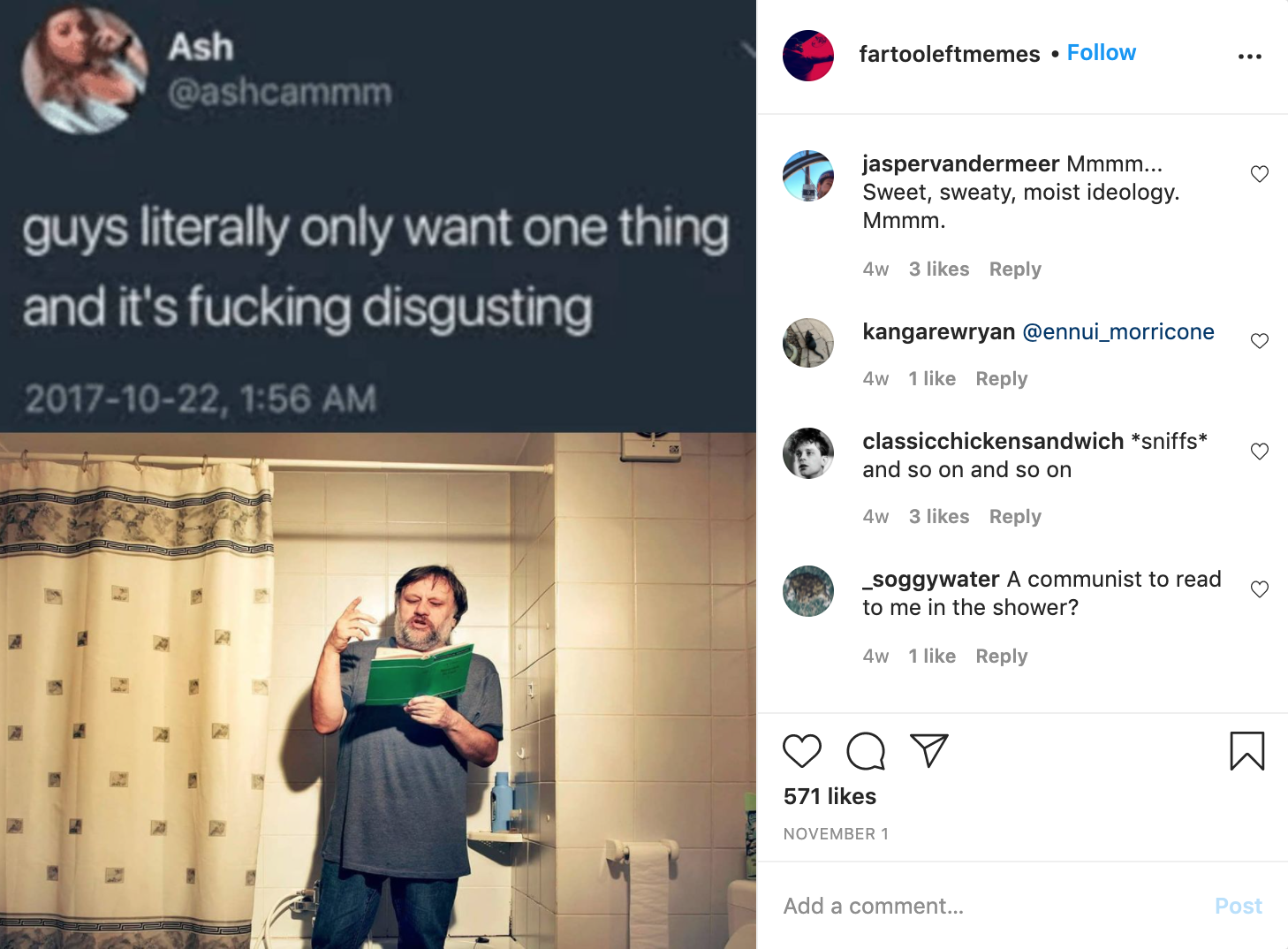 As far as I can tell, the right… still can’t meme. Nobody’s getting an education on the Chicago school of economics or nationalist organizing strategies from sucking down right-wing punchlines that often boil down to laughing at “liberal tears” and lazy Fox News talking points. The question of whether or not memes can be genuinely useful to a movement, then, boils down to its value as what researcher and internet theorist Geert Lovink calls “tactical media,” or “a tool for creating ‘temporary consensus zones’ based on unexpected alliances” that bring together artists, critics, writers, activists and agitators. Memes have the efficiency of emojis, but with far greater potential to convey depth and satire in the digital space of 2020.

“Memes seem to be operating almost entirely under what we used to call ideology. The power and interest that memes have is entirely due to their status as ideological machines, which doesn’t mean they are useless, debased, etc. — on the contrary, it demonstrates how complex and powerful they are,” theorist Alex Galloway told Lovink for a 2017 article.

That power works most obviously within in-groups, to signify who gets the joke — and therefore, the actual ideas. Can it also work to break into the influence of an opposing group and court right-wingers with memes about the failures of capitalism? As Viennese artist Johannes Grenzfurthner remarked to Lovink, “You can’t penetrate conservative bubbles with liberal content. Your content has to be so obscure and mysterious that it’s not working as a propaganda tool anymore. Or will just be used for ridicule.” 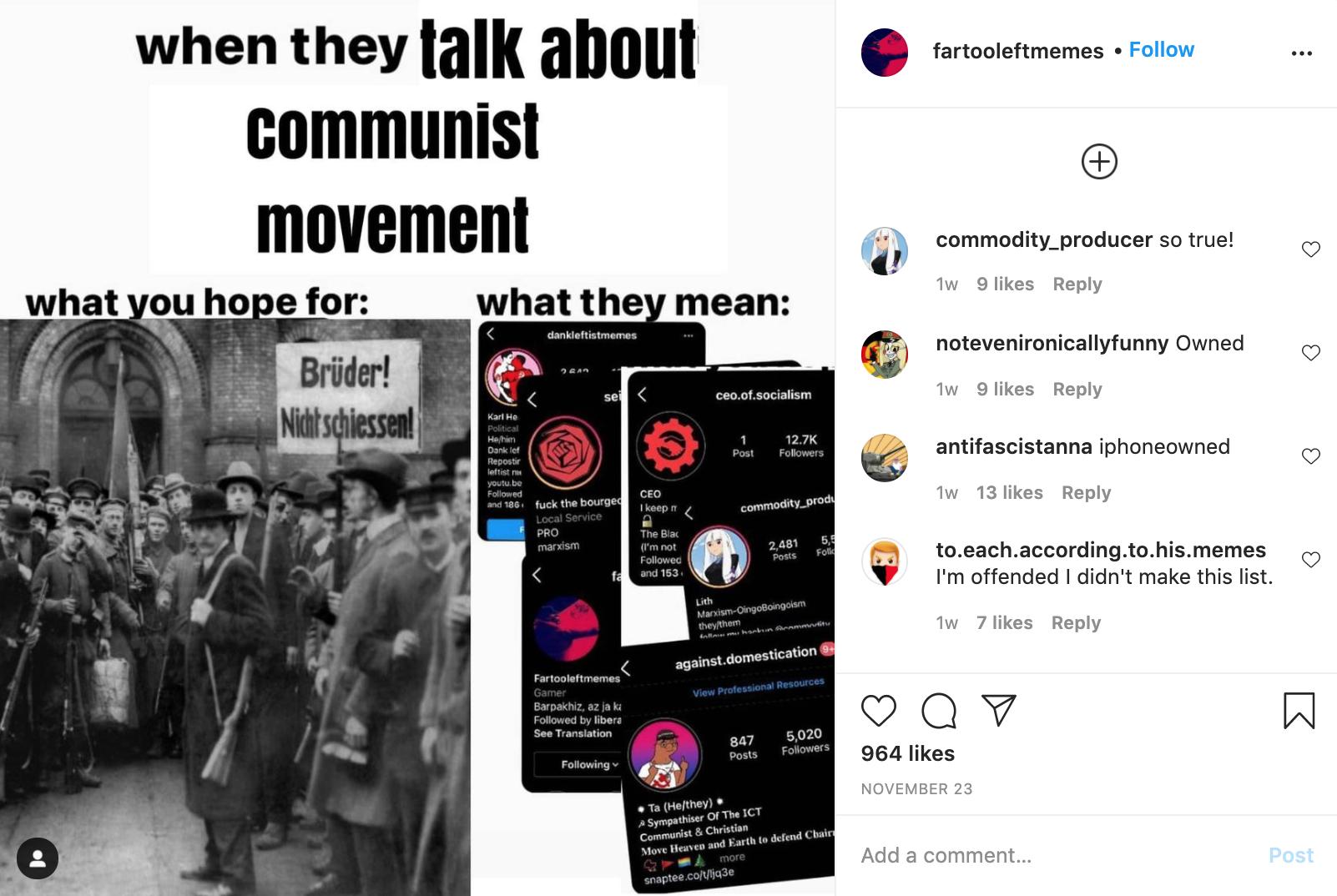 It makes me think of how clever Bill Watterson was to slip in references to socialism and Marx in his beloved Calvin and Hobbes comic strip — a strip that has never been defined by its political principles. R/DankLeft and other hubs of leftist memes will never have the broad audience that Watterson had, of course. But there’s already proof that sarcastic, increasingly Dadaist takes on socialist rhetoric can help enthrall a new generation of people questioning their core political beliefs. Maybe, just maybe, weirder, more radical, more inscrutable shitposts will be a serious tool for winning hearts and minds.

Even if those minds are really confused at first.