Four hundred years later, one poor noble is still best remembered for his wife having sex with another guy

A song my girlfriend and I are truly obsessed with is City Girls’ “Come Outside.” Barely over two minutes long, it efficiently states the rap duo’s hard-boiled principles and opens with one of the great catchy taunts in recent memory: “Bend it over, bust it wide (bend that ass over) / I got a bitch scared to come outside (come out, ho).” Is there any greater humiliation than hiding while your enemies publicly denounce and insult you, most of all for refusing to stand up and fight?

We announce the intent to brawl by telling someone to pull up, or to meet us outside, as we provoke them with a few choice epithets. The street corner or parking lot is an established neutral battlefield for such violence — and you have to be willing to face your foe on that open terrain if you want to preserve your status.

While the historical record has little to say about Cary, much more is known about the presumed target of this mockery. Indeed, Robert Devereux, 3rd Earl of Essex, who became the initial Captain-General of the Parliamentarian army, had been widely known — despite his otherwise evident popularity — as “the Great Cuckold.” As a teenager, he was married to a girl of the same age, Frances Howard, but went on a tour of Europe without consummating the marriage. While he was away, Frances entered into an affair with Robert Carr, 1st Earl of Somerset; when Lord Essex returned, she wanted nothing to do with him. Eventually, she sought an annulment, claiming that her husband was impotent and that she remained a virgin despite her efforts with him.

Devereux swore that he could perform sexually, but not so long as “she reviled him, and miscalled him, terming him a cow, and coward, and beast,” according to Untam’d Desire, a history of sex in Elizabethan England. The drama of their separation naturally became fodder for jokes and gossip. At one point the court weighed the possibility that Lord Essex was a victim of satanic magic. And when an official examination found that Frances’ hymen was intact, rumor spread that she had used a body double for the occasion, as she was veiled “for modesty.”

In this era of combat, flags served both practical and symbolic purposes. “Colors were a practical rallying-point for troops in action,” writes historian Barbara Donagan in War in England 1642-1649, “as well as symbols of honor whose capture was enumerated and flaunted as evidence of the enemy’s humiliation.” The “CUCKOLDS WE COME” banner cleverly turned that kind of embarrassment into an offensive weapon: Lord Essex was already a loser in love, and so, by extension, were the men he commanded. (The Royalist Richard Symonds in his diary of the period described the image of the creature in a barrel as “a fox pulling the roundhead by the ears,” i.e., dragging the Parliamentarians into the open.)

That would have been bad enough, but hundreds of years later, we’re still laughing at poor Essex for getting roasted so hard. The images are continually reposted on social media, you can buy your own real nylon pennant, and creative fans have remixed it with the Gadsden flag and delivered “high definition” updates. 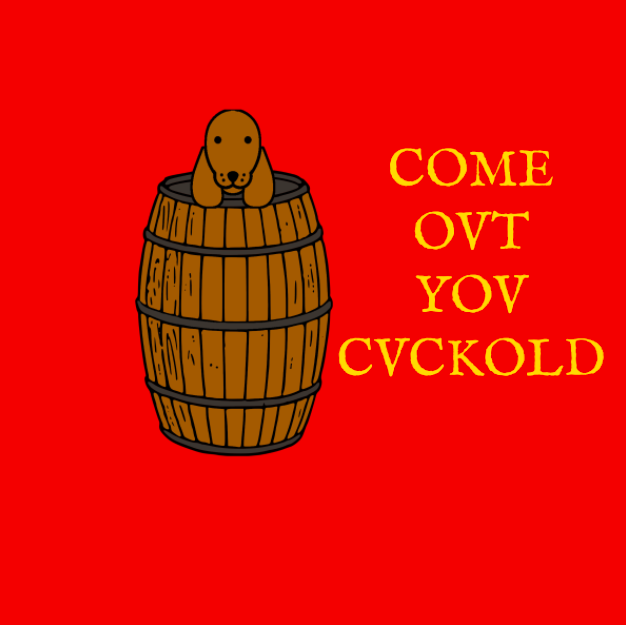 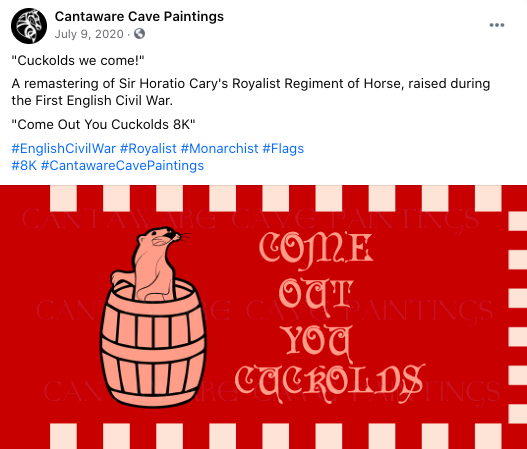 Even Devereux’s military campaign continued this theme — or should we say meme? After some stalemates and successes in the field, the Earl decided in 1644 to wage a campaign in Royalist-controlled Southwestern England to liberate Parliamentarian towns under siege there. He and 6,000 men wound up trapped in the county of Cornwall when King Charles’ army followed them there and engaged them in the Battle of Lostwithiel. Ultimately defeated, Lord Essex and associates fled by a fishing boat, abandoning the infantry to be captured by the king.

Sure, it’s not quite the same as your wife cheating on you, but sneaking off instead of surrendering with dignity does lend support to the “COME OUT YOU CUCKOLD” jeer insofar as it implies weakness and avoidance. However, it seems the flag wasn’t in use on this occasion; Sir Horatio Cary’s Regiment of Horse wasn’t there, and was far more active the following year, after Essex had resigned his commission in the wake of his disastrous last stand in Lostwithiel. Whether Devereux was in charge anymore must have mattered little to Cary and his men, who would’ve flown the insulting standard just the same, demeaning all their enemies as cucks.

Our species being what it is, the tradition continues today, whether by direct reference, confrontational hip-hop or simple name-calling on the internet. Say that to my face, we dare one another. And, when we want to get really personal, we cruelly speculate on (or draw attention to) the infidelities of our rival’s spouse. That the shame remains a salient biographical detail of Robert Devereux, 3rd Earl of Essex, may prove that it’s better to be forgotten than preserved in history. But credit the unfortunate man for this crucial lesson: The past is closer than you think.