The reasoning behind your allegiance here is post-hoc; you can see from these tweets that most people begin with a visceral dislike for one style or the other, then rationalize the suitability of the alternative. Those willing to toggle between both often have a personal code of usage as fascinating as the schism — the notion of deploying “come” as the verb and “cum” as a noun (almost always for male ejaculate) is common. But in any event, “come” is understood to represent a conservative ethos. It’s buttoned-up, maybe even a little standoffish, and certainly euphemistic. It’s what a sensible copy editor at a respected publication will insist you use, if you’re allowed to use it at all.

From there, it’s easy to acquire the noun form of “come,” although the Oxford English Dictionary finds a colloquialism of the mid-1400s that further explains. In the malting process of alcohol production, some grains would cause the malt itself to rise to the top and occasionally shoot off. That material was called “the come.” Remind you of anything?

Preston likens the staunch defenders of “come” to the prescriptivists who flipped out when the spelling “lite” came into vogue along with diet drinks. “Oh, as if the world is gonna end because some people are so lazy they can’t spell out the full word,” he jokes. “It’s the desire to make fun of people on the other side, but there’s nothing linguistically strange about it… people are enormously invested in language and know nothing about it. Linguists aren’t in charge of language, and thank god. Real people are out there doing what they do, and the old and higher-class people get up in arms.”

By the way, this etymology may be of special interest to the “come” partisans, as the Anglo-Saxon root word Preston refers to here is “cuman,” for “to move with the purpose of reaching, or so as to reach, some point; to arrive by movement or progression.” That’s right: Before we had “come” as we know it, the controversial “u” was present in Latinate-alphabet spellings of its direct ancestor. Plus, the word could take an “o” or a “u” depending on tense, and sometimes even a “y.”

There’s joy in the basic morphology as well as the innuendo (otherwise, why name your store that?), and in this case, the two effects appear to mutually reinforce one another. You might say that both qualities resist bland convention.

“Every time we express ourselves, we’re embedding meaning about our social status, gender, class, sexual orientation, disabilities — there’s so much happening in language tied to who we are as people,” says Chelsea Reynolds. “Naughty bedroom discourse isn’t an exception. It’s tied to what we’re confident about, preferences in terms of dominance and submission, all of that. Use of profanities or vulgarities like ‘fuck’ or ‘pussy’ says a lot, they say you’re not part of the Protestant normative cis patriarchy.” 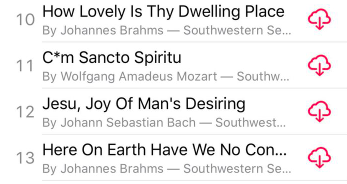