I Trekked Alone Across Antarctica for 54 Straight Days

Expeditioner Colin O’Brady spent nearly two months pulling a 400-pound sled across the frozen tundra — without a friend or family member in sight. You could call it a dry run for sheltering in place

For 54 straight days, Colin O’Brady lived as an ascetic on the icy, impossibly white desert known as Antarctica. The endless, 24-hour sun blurred the edges of time, giving him a Sisiphean backdrop as he arose, trudged for 12 hours and then sat huddled in a tent, eating alone to a soundtrack of the wind brawling with his tent, day after day.

Most of the hours were dedicated to walking, over pockmarked ice ridges and through blinding snow storms, all while mummified in full winter gear in order to stave off frostbite from the minus-70 degree chill. O’Brady had to pull roughly 400 pounds on his supply sled, too, with no beast or friend to swap the load. The 30-mile-an-hour winds sometimes made the sled feel like a literal ton. But with 930 miles to travel, there was no time for O’Brady to take a day off. He had the fitness of a veteran athlete and expeditioner, but in Antarctica, every ounce of training can help save your life, he tells me.

“And people like to wonder, ‘How can you pull a 375-pound sled by yourself for that long?’ Everyone wants to hear about my workout. And yeah, I put on 20 pounds of muscle and beefed up my legs,” O’Brady continues. “But I love to remind everyone, and I believe this from the bottom of my soul, that the most important muscle we all have is the six inches between our ears.”

The 35-year-old faced the mental test of his life in 2008, after a freak accident at a Thai beach resort (involving “fire dancing”) left him with severe lower-body burns. Local doctors suggested he might never walk normally again — a crushing blow for the college athlete and aspiring outdoor adventurer. The rest of the story sounds like a sports-film cliche, with the hero using true grit and a pinch of luck to recover and overcome, but that’s what O’Brady did. And that recovery left him with an unshakeable faith in the fundamental resilience of the human body and mind.

O’Brady has received criticism for the way he’s portrayed the “unprecedented” nature of the solo Antarctic trip, which many explorers argue isn’t the most difficult or treacherous crossing of the southern continent. Regardless of the details, though, the trip took everything O’Brady had. Pushed to the limit on the ice, he relied on deep meditation, his bond to people thousands of miles away and sheer desire to get through each day. Which is how we ended up on the phone, talking about how that resilience matters more than ever as regular, non-Everest-summiting people around the world adjust to a life in a pandemic and a quarantine. It ain’t quite being stuck on the Antarctic plains, but O’Brady is keenly aware of how exhausting the dread of uncertainty and disruption can be.

His plans have been torn up, too — he was set to promote his bestselling new book The Impossible First around the country, and arrangements to climb Everest from the Chinese border are no more (“So, uh, that’s definitely not happening now”). Still, O’Brady adds that he’s grateful to have a home and a living at a time when others are struggling with the pain of losing their way of life. And he believes that both the practical and damn-near spiritual lessons he learned out on the ice have something useful to say about the human condition no matter what kind of hardship we face.

You made an amazing recovery from the burn accident and became a big triathlete before transitioning into exploring the outdoors. When did you first realize how much bigger and more risky this activity is?
I remember distinctly being in the high mountains. I went on an expedition in the Himalayas, to a mountain called Manaslu, which is the sixth tallest mountain in the world. It was in 2015, when I was in preparation for my Everest climb. I remember thinking, “Wow, the stakes here are so different.” In triathlon, I obviously had some success as a professional athlete, but I also had some really bad races. And sometimes when you’re having a bad race in a sport like that, you can put your hand up and step off the course and say, “You know what? I’m having a bad day, I’ll try again tomorrow.” And I remember that feeling in the mountains, particularly at high altitude when you’re pretty far out there and exposed — you confront that there’s no, “Okay, I feel like quitting right now.” 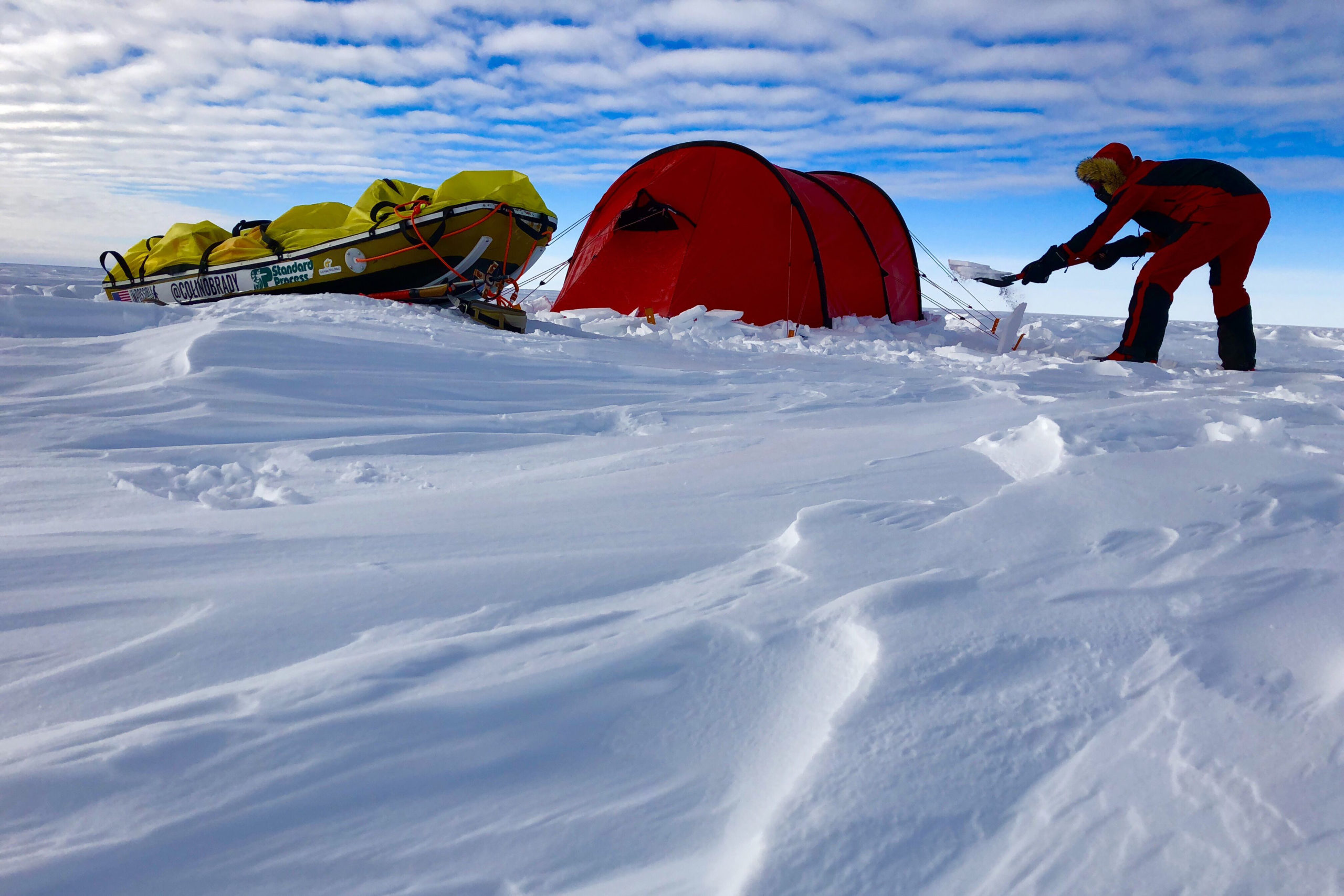 How did that pressure, as well as the sheer loneliness of walking for nearly two months by yourself, unfold in Antarctica?
I mean, even from the very beginning, I remember the feeling of that tiny little plane dropping me off on the edge of Antarctica. It just takes off and flies away and there’s nothing looking out for you anymore. You turn around and it’s just endless white. There’s nothing out there, and 24 hours of daylight. It’s endless white. This plane has flown really far just to drop me off and then I felt so small and insignificant. It’s a bizarre feeling.

Humans are used to being in some kind of community, so it’s almost against our DNA to be that isolated. I deleted most of my music, podcasts, etc. so that I could be in complete silence, on purpose, for 95 percent of the time. I think I had five albums on my phone for the whole duration. So yeah, I still like to joke that “we” were alone in the silence. It’s like throwing a party and all of your angels and all of your demons are invited. All the things in your brain find a way to swirl around and come to your consciousness. Then that’s broken by moments of just, “Oh my God, I’m so alone. I’m so far out here.”

I did have a satellite phone on me, so that I could connect with my wife every day, and a little tracker where people could follow my progress. But all but 15 minutes of each day was spent completely alone.

You probably had an idea of how to train your body for the Antarctic trek, but how did you hone in on the mental preparation?
From the start, I knew that mental preparation was going to be crucial. The biggest thing for me is my meditation practice. I got introduced to something called Vipassana meditation about 10 years ago. When I was racing triathlons, a friend told me to try it out, and I went to this 10-day silent meditation retreat. So no reading, no writing, no eye contact. I had never meditated a minute in my life, but my style, I tend to dive into the deep end of things. And that practice, of being alone and observing your body and being aware of pain and just focusing on the end goal, it did something. I’ve gone back and repeated the 10 days several times, and incorporated the method into my normal daily meditation practice. Ten days is a big investment, but for me, it paid some of the biggest dividends of my life.

There’s no way of facing that level of depth of solitude and isolation in Antarctica if I hadn’t trained my mind to be aware of that. But once I started doing the work, I lost the fear of isolation. I started to embrace isolation. So on the ice, on those long days, did I have a lot of rough moments? Of course, but I also had some really beautiful moments that had everything to do with being okay alone. And I do think it stemmed from my meditation practice. 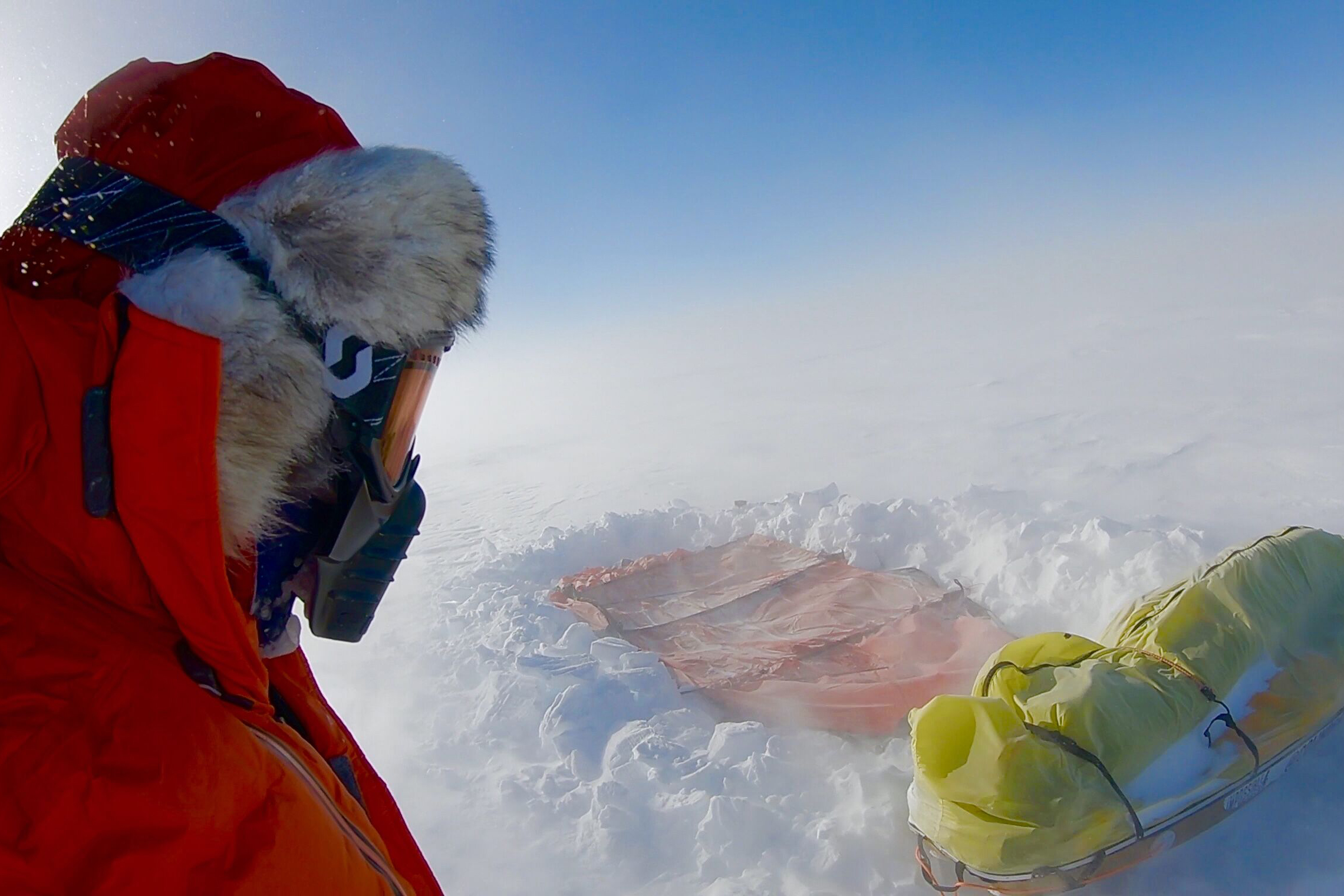 Did you find yourself some mornings just unable to get up and go? Or was it important to be consistent with a routine?
Routine was crucial for me. I think in 54 days, I didn’t take a day off. Sometimes the problem is less about boredom and more waking up and thinking, “Oh my God, how is today going to go? How will I survive?” When your world is disrupted, it can be weird to try and have structure. But I think it’s really, really crucial to try.

But the second, way more important part is… I’m a huge believer that we are the stories that we tell ourselves. The very first day on the ice, I actually started crying right when I woke up, within the first hour, because I was so overwhelmed. I was struggling so hard to even move my sled. When you cry in 20-minus temperatures outside, tears freeze to your face. And what happened the following day was I woke up and flooded myself with so much doubt, so much anxiety, so much fear. To override that, the only real thing that worked was to wake up and shout out at the world every single day — ”Colin, you are strong, you are capable, you are strong, you are capable.” I don’t think I believed it the first day. Maybe a little more on the second day. But it became a mantra. It helps reprogram your mind.

I can’t help but follow the bad news every day, but it’s worth giving yourself those moments, every day as part of routine — some level of positive affirmation or sensation of strength and optimism.

How did that mantra and routine help as things got truly dire near the end of your expedition?
It was pretty touch-and-go all the way until basically the end. There was never a sense of knowing I got it. An explorer who attempted a very similar project a few years before me, Henry Worsley, died a hundred miles from completing the crossing. That was in the back of my mind, as a really sad story, but also just this feeling that it’s not over until it’s over. And what was really pronounced and on my mind was that my body was breaking down significantly.

I was malnourished because I couldn’t carry enough food. I’d lost a severe amount of weight. My bones and ribs were sticking out. It was just harder to do the physical task day to day. But my mind got stronger. I became more confident: “Okay, another 12-hour day? I’ve already done 50 of these. I can do another. I could do more.” As my body got weaker, it was like my mind almost overrode the physical weakness. I was beat down, but drawing plenty of strength. And I basically did the last 70 miles in one sleepless push.

It’s a totally natural, human thing, for our bodies and minds to give us warning signs like, “Hey, you’re tired, you shouldn’t do this, you shouldn’t try more.” But what I’ve learned is that we tell ourselves that long, long, long before we need to stop. It’s not to say you should push yourself to the brink every single day, but we — every person, not just me — have so much more capacity to achieve beyond what’s obvious. And that’s a silver lining of sorts for this eternal optimist as we all collectively go through something that’s hard and frightening.