My Family Celebrates Christmas With a Keg and Subway Sandwiches

For this group of 60, footlong subs are yule logs of sanity — and all that matters is that we’re vibing

For some people, Christmas Eve dinner is a formal affair, with white tablecloths, polished silver and a Honey Baked Ham. For my obnoxiously large family, it’s a college party. That means kegs of beer, plastic forks and Subway sandwiches.

Some might think this is abnormal — but therein lies its brilliance. There are zero expectations when you’re playing beer pong in church clothes. Plus, those testy political conversations with your Boomer uncle never happen when you can hide from him in the basement.

After all, it’s a rager. Who’d want to put a damper on the good times? 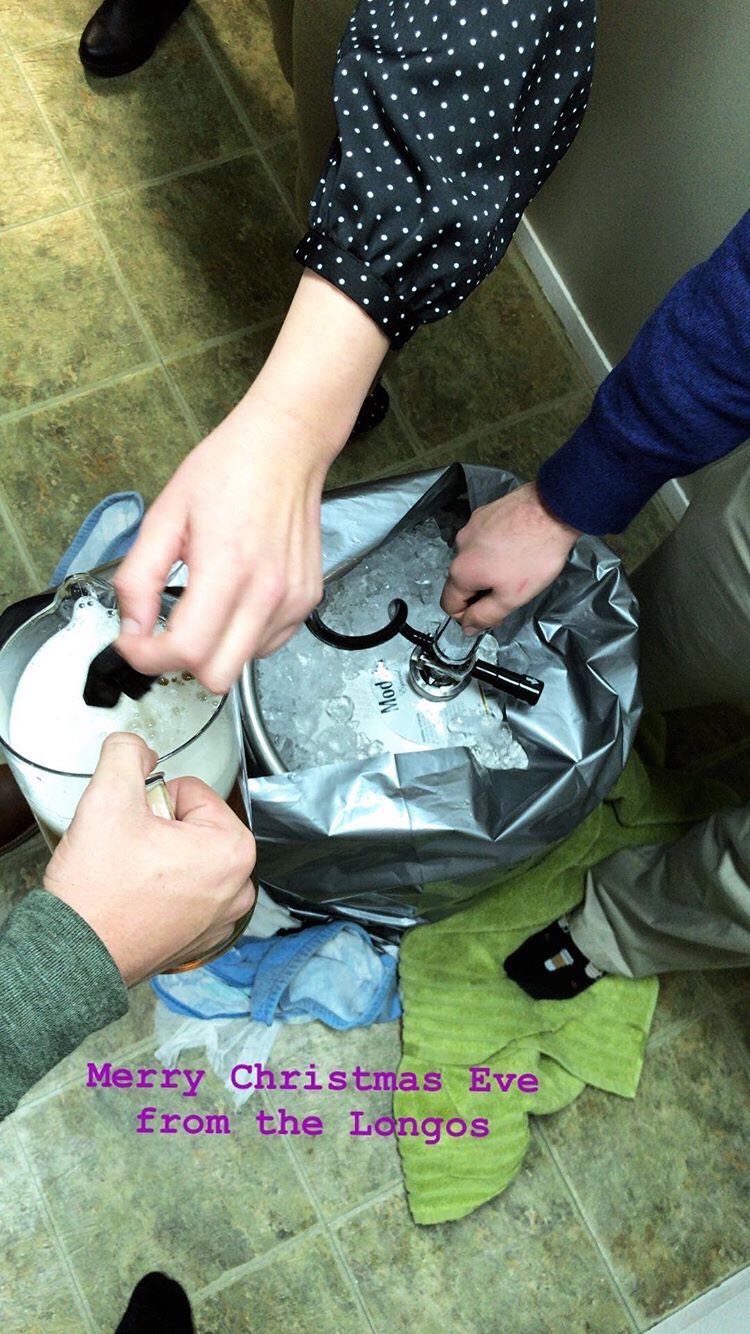 Christmas isn’t always Subway and a keg. Sometimes it’s chili. Occasionally, pasta. It doesn’t matter what I’m scarfing down. I’ll be lounging on a couch and watching my little cousins play Mario Kart while drinking wine out of red Solo cup. (You won’t find this low-carb king near a keg. Sorry, Dad!) All that matters is that we’re vibing.

There’s no epic This Is Us-esque story about how our Christmas became so casual. No oven fires or belligerently drunk uncles. We’re just a family of nearly 60, trying desperately not to find more reasons to bicker.

So if Subway can be the yule log of sanity, we’ll gladly scarf down subpar sandwiches.

I’ll admit that for most of my childhood, I was always a little bit resentful of the big affair. I never felt, well, seen. As a closeted kid, my pre-determined identity at family parties bothered me in ways I couldn’t fully understand. I was Dave’s youngest son, or Pat and Dan’s baby brother. I wasn’t even Joe: I was Little Joe, the 2.0 version of an older cousin with the same name. Still walking down the road to my own identity, each association made me feel like I’d been forcibly pushed a step back.

Eventually, I’d sneak upstairs to find my cousins closest in age, Rachel and Kate. We’d talk about High School Musical or watch Instagram stories while picking at our veggie subs. We were always in the back of the food line when the ham and turkey sandwiches were snatched up by older, taller boy cousins. And of course, there were family members who wanted to know more about me — but I didn’t know what to say. Like an awkward networking event, the family gatherings only exacerbated my isolation.

And the conversations felt like speed dating. Yes, I am eating enough. Yes, my mother is doing well and wishes you all a Merry Christmas. No, I didn’t watch “the game” last night. The conversation usually dies off after that last question: Caring about the Bears is a presumed universal experience in Chicagoland, and my dad is one of two siblings with season tickets.

Over time, I became anxious about gifts from relatives who didn’t understand me or my interests and saw me only as one of many “boy cousins.” I found myself scrolling on my phone more than I do interacting with anyone. Kate was busy introducing the family to her lovely boyfriend; Rachel occasionally spent Christmas with her dad’s family. My tribe was growing up while my life stayed the same.

But this year feels like it might be different. For the first time in a while, I’m looking forward to Christmas Eve.

In September, I was covering RuPaul’s DragCon in midtown Manhattan when I stopped into Subway for a quick lunch. Biting into a chicken, provolone and lettuce footlong while scrolling through photos of children and their fathers decked out in glitter and surrounded by drag queens, I was reminded of my own relationship to my father’s family.

Nearly a year ago, just after Christmas, I moved to New York in part to forge my own identity and be more than one of the many Longos — but I was well aware of the message that sent; our family rarely leaves Illinois. After my dad’s oldest sister, Chris, unexpectedly died of a brain aneurysm while away at college, the family has never strayed too far from home. Heading off on my own felt like uncharted territory, and I wondered what they’d say — or how they’d cut me off.

But despite (or because of) the distance, the family showed up for me, and the few hundred miles of separation helped me feel close to home again.

In fact, outside of Chicago, those family-rager connections bloomed. I recently visited Kate near her Washington, D.C., home. While listening to jazz outside of the National Gallery of Art and munching on carrots and hummus, we gossiped about family drama and who might get a plus-one for an upcoming family wedding (I didn’t; she did). And I’ve connected with my Aunt Penny on her own twentysomething years in New York. (She still can’t believe I haven’t made it to the Guggenheim Museum. Do people know how far the Upper East Side is from Brooklyn?)

Though we won’t be having Subway this year (Aunt Gina says we’re getting Qdoba), I’m excited to go home to my Midwestern family that finally sees me. I’m eager to share my life — and a newfound feeling of self-confidence — with them all.

The only thing that hasn’t changed? I still hate sports. But now that Jay Cutler is on Very Cavallari, I’ve got a common thread to pull on.