More People Over 50 Are Running Their First 5Ks. How Do They Do It?

The biggest lesson: Age ain’t nothing but a number

With his 50th birthday looming, Doug went to the doctor and found his BMI clocked in at 33 — 3 points into the “obese” category for his height. He knew it was time to make some changes, but for 49 and a half years, Doug never rose above walking speed unless he was late for a flight. The Northern Virginia resident had always been pretty skinny, too, so he’d never even considered whether or not he was too old to start running. After all, he was happy enough with his figure to avoid paying attention to his eating habits.

So, even though he’d been out of shape for half a century, he strapped on a pair of running shoes and started walking on a treadmill for an hour. Then he’d run at 4 mph for 0.2 miles before resting. Over time, he increased his speed and distance as any new runner should, whether they’re 23 or consider themselves too old to start running. “Soon, I was running for a half-mile nonstop at 4.5 mph,” he says. “This was an amazing feat for me in mid-2018.”

According to Paul Ronto, director of digital content at RunRepeat.com, more and more older people are entering the sport. 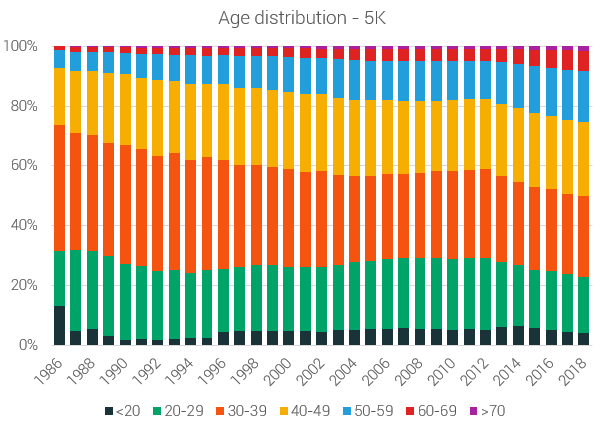 “I can’t definitively say if people are getting into running as a new sport in their older age, or if they’re coming back to running again later in life,” he explains. But what we do know is that the percentage of runners over 50 participating in races is on the rise.

Ronto pulled data from a recent, massive RunRepeat study that shows a “noteworthy rise in participation among 40- to 50-year-olds” in both marathons and 5Ks. Now more than ever, no one should consider themselves too old to start running. 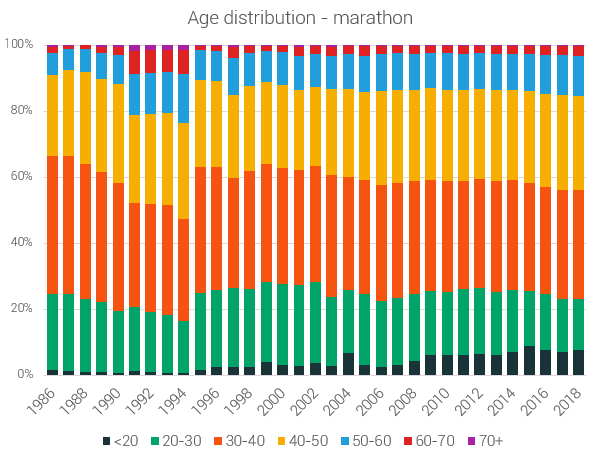 For 5Ks specifically, Ronto says the proportion of participants over 40 have nearly doubled (26.3 percent to 50.4 percent). “We see younger participants are in decline, but more and more participants over 40 are joining in. This is consistent with the fact that nowadays people are free and welcome to start racing at an older age,” he explains.

Sure, there are plenty of folks over 40 who’ve been running for decades. But what about the guys like Doug? What’s getting them into running at such a late stage? 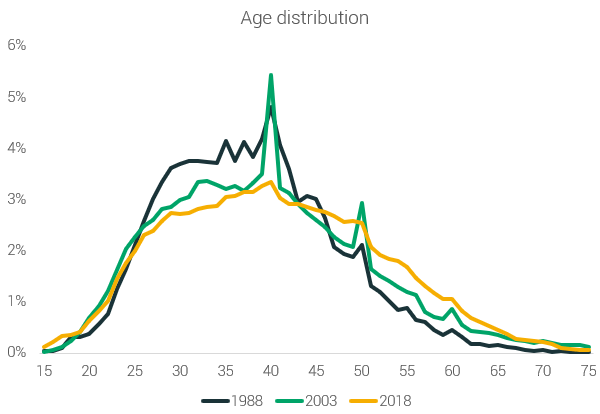 Ronto suggests one reason could center on the spikes in the chart above: major milestones in one’s life, “like turning 40, 50 or 60, when people feel compelled to do something hard, healthy and challenging.”

While Doug began running after his 50th birthday, he quickly learned casual wasn’t enough. While packing for a flight back from Portugal, Doug felt a “weird” heartbeat. He shook it off; it wasn’t anything aligned with a heart attack, so he assumed it was nothing and would just go away. It didn’t.

“I honestly wasn’t sure if my heart was going to just flicker out like a faulty lightbulb at any moment,” Doug says, but he got on the transatlantic flight anyway. “I suddenly realized I was going to spend the next seven hours over the Atlantic with no real medical support available. That was probably one of the most terrifying flights I’ve ever taken. I held my wife’s hand the entire flight back home.”

Doug was diagnosed with obstructive sleep apnea, which can cause the premature atrial contraction or “fluttering” heartbeat. Despite his being in better shape, the diagnosis told Doug he had to keep going. “I’m hoping that if I can get back to the weight I was at the first few years after college, maybe the sleep apnea will go away and I can ditch the CPAP machine.”

As of now, Doug’s made great progress. For never having run before, he set a new personal record, running a 9:15 5K. “It’s not really fast, but it’s amazing to me,” he says. Had he felt 50 was too old to start running, who knows where he’d be now. “If you had told me a year ago that I would be able to run for three miles straight at over 6 mph, I wouldn’t have believed you.”

According to Ronto’s data, there are a few misconceptions worth clearing up. First, 40- to 50-year-olds are not only not too old to start running, but they easily compete with younger racers. Second, older runners are not more prone to injury than their younger counterparts — “so long as they train properly.”

One thing that’s changed: People are just more health-conscious now than they used to be, Ronto says. “My personal opinion is that older runners are getting into the sport as new runners, not as returning runners,” Ronto says. And the reason for that is the “big push for health awareness these days. People that didn’t work out in the past are now getting into running because it’s so accessible. All you need is a pair of shoes and off you go. It’s really one of the biggest sports people participate in around the world.”

‘I Had to Be Shaq Tall to Justify That Weight’

Take Mark Lewis, a 41-year-old living in the U.K. At six feet, six inches, Lewis always figured he was the wrong body shape and weight to run, so he never tried to do it seriously.

But when he realized he weighed 320 pounds in his late 30s, he needed to try something. “I needed to be Shaq tall to justify that weight,” he says, “so I started doing a couple of partial runs every now and then.”

Lewis also realized that if he went into his 40s “grossly out of shape,” then getting back to anything remotely healthy “was going to be staggeringly hard.”

So, like Forrest Gump, he quit thinking he was too old to start running, and just started running. “I could do about two minutes before needing to walk,” he tells MEL. After a few weeks, he was about to quit — “I had Achilles tendinitis, shin splints, bad knees, hips, everything!” — but thanks to minimalist shoes and reading Born to Run, he kept on.

As Lewis worked his way through injuries and into decent shape, he slowly began to notice his sons becoming teenagers. “Last year, I decided [my boys] where getting too close to being my physical equals, so I went hardcore and signed up for a bunch of 10Ks.”

Since then, Lewis has not only worked his 5K time down to 20 minutes, he’s “done a load of obstacle races this year, including six Spartans, plus a few half-marathons and a couple of 50Ks.” 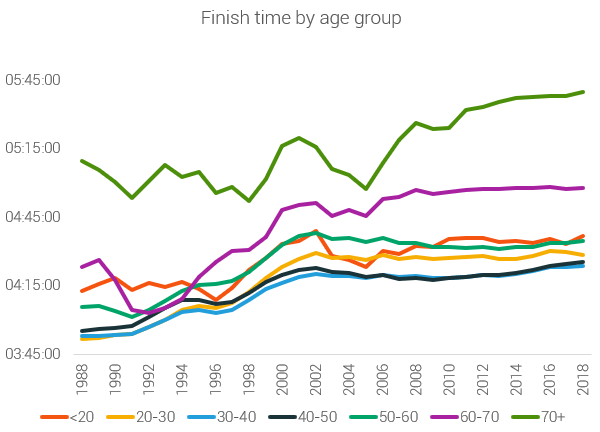 So what’s their secret? I’m in decent shape, and I still need a mountain of motivation to go for a run. How do you get started if you haven’t run in 40 years?

To start, Ronto says, older runners should ease into things, particularly if they’ve never run before. “Buy proper-fitting shoes, hydrate, stretch and just start slow,” he says. “Getting a coach to help with stride and form can’t hurt either, and joining a running club is a great way to meet other runners with more experience to learn from.”

For Doug, besides the health benefits, it’s the running community that’s kept him going. “I’m having a ton of fun at this. I honestly never knew how supportive everyone is. The podium winners and those who just missed the podium are always cheering each other on, celebrating each other’s PRs. It’s amazing. My only regret is that I didn’t find my way into this about 10 years earlier.”

As for Lewis, running has helped him maintain alpha status in his house full of boys. More importantly, he says, it’s changed the way he views aging.