How to Perfect the Quarantine Buzz Cut

It’s not just a queer masc grooming statement. Straight men are crisis-buzzing their hair too — and often messing it all up

The first quarantine grooming rule is this: If you want to bleach your hair, don’t. The second rule: If you want change your hair without it looking like a cry for help, go on Instagram Live.

Just ask Jake Faris, a Brooklyn gay man who was not going through a crisis, thank you very much, but had grown tired of his terf bangs (he is not a TERF). Faris set up a tripod in his kitchen, recruited his roommate to be a stand-in barber and went live on Instagram to buzz off his black hair.

He solicited an endearing guest appearance by his mother, Kim, all the way from Orange County, California. “Cutting all my hair off live on Instagram for all the world to see felt like demonstrating that my forthcoming haircut did not occur spontaneously in the middle of a good cry,” Faris, 26, tells MEL.

With barbershops forced to close because of the coronavirus pandemic, many men with grown-out fades and bushy sideburns are opting to take the nuclear option and buzz it all off.

But doing so is not as simple as just buying any electric razor. To actually buzz off those curls without spurring an actual emotional crisis by fucking up your hairline, you’ll need a series of tools and a precise hand or two.

Because if you do a bad job and it grows out, you’ll have to go crawling back to your currently out-of-work barber anyway. “Don’t mess up, because we’re going to have to fix whatever you mess up,” says Asia Jackson of Asia J Cuts in Los Angeles.

Go Balds to the Wahl

Bobby Cambalik, 26, is immunocompromised, so he’s been under quarantine in Downers Grove, Illinois, for over three weeks, unable to get a haircut. His fiancée, Katie, agreed to buzz his hair, but they didn’t have hair clippers, so the couple improved and used Cambalik’s beard razor to buzz his head. “We figured it would be just as efficient,” Cambalik tells MEL.

They figured wrong. The razor with a two-inch guard couldn’t tackle his thick hair, so Katie did away with the guard and shaved Cambalik’s hair off. “Essentially, I’m bald now,” Cambalik says. 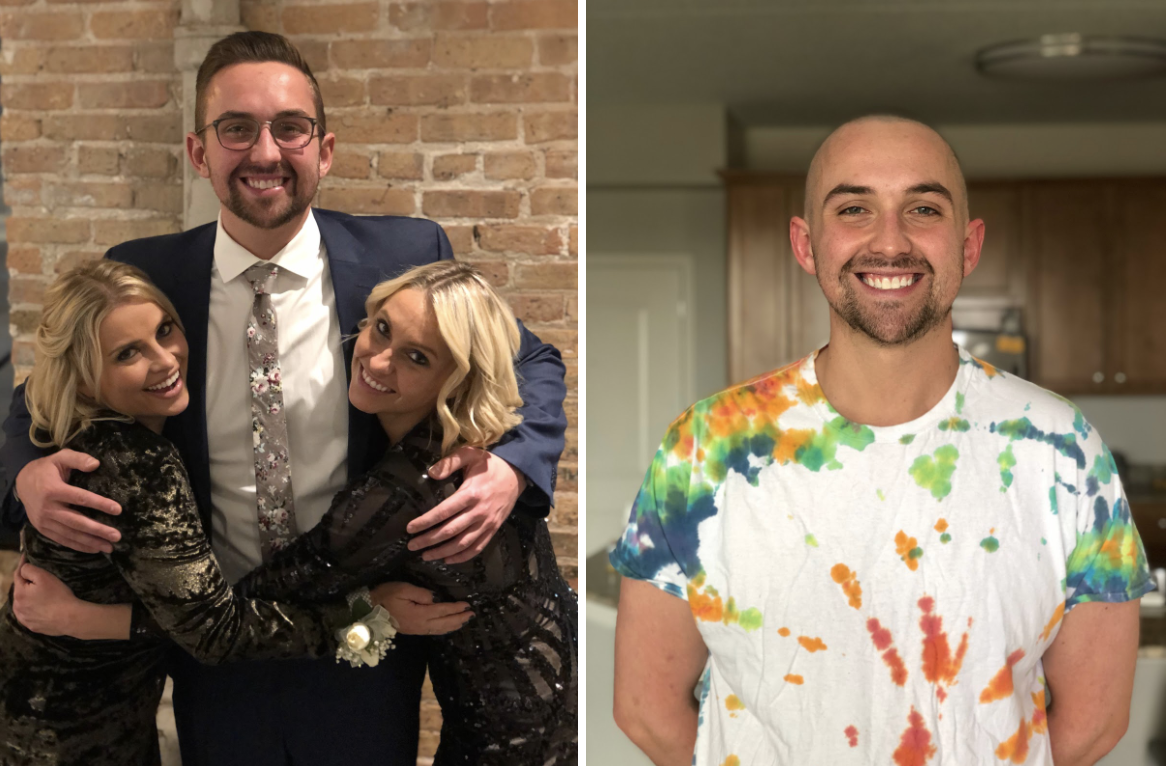 “That’s the hack job I’m talking about,” Sam Chulpayev, owner of Made Man Barbershop in Manhattan, tells MEL. “Beard razors are not meant to cut big bulks of hair. Even though beard hair may be thicker, it’s less hair than on the head.”

Chulpayev recommends the brands Wahl and Andis for hair clippers and attachments. Wahls retail from $12.99 to $69.99, while the higher-end Andis run upwards of $100. Fair warning: Favorite models like Wahl’s Color Pro Rechargeable Clipper Kit are sold out. And don’t forget about your one-, two- and three-inch attachments. Otherwise, you’ll have to shave it all off.

Cut Yourself (and Your Hair) Some Slack

As for how to buzz, first make sure your clippers are clean and oiled and the blade is lined up well to your scalp. Even small deviations may mess up your crew cut. Then follow Chulpayev’s rule of threes. Comb your hair and buzz against the grain. Repeat three times for an even cut. “When you go with the grain, you’re not catching any hair,” Chulpayev says.

Keep your blade flat against the skin and move your hand in short rocking motions to blend the hair. Don’t expect to achieve the perfect fade, especially on the back of your head where vision is limited. “Using any guard or blade under a No. 1 will be very difficult to blend on your own. So proceed with caution,” Kristopik says.

As for perfecting the squared or rounded line on the back of your neck, know you’ll likely mess up. Chulpayev says it’s nearly impossible to achieve a perfect line at home. “You need a big mirror and a three-way mirror with a center, left and right mirror,” he says. “My recommendation is don’t even try it.”

Be Ready to Be Bald and Humbled

Much like bleaching your hair, the margin of error is high on a DIY buzz cut. Jeff George, 31, learned this the hard way after going on Instagram Live to shave off his hair for the first time since he was 10 years old. “It didn’t look terrible, but I don’t think I’ll be doing it again anytime soon,” he says.

One unexpected downside? George now has to wear a hat going outside to walk his dog, Larkin. “I vastly underestimated how cold my head would be, so now I have to wear a stupid beanie,” he says.

Barbershops could use your money anyway. Numerous shops and hair salons set up GoFundMe pages as they’ve shuttered business due to non-essential stay-at-home orders across the country, including Fellow Barber, Made Man and Tuft Barbershop. “Only proceed if you’re prepared to buzz your head if you should happen to screw up. If you’re not, then please wait for your barber. They’ll need your support when all this is over,” Kristopik says.

So spare your barber, because she’ll have enough on her plate trying to fix up the fucked-up buzz your buddy or fiancé(e) gave you. As Chulpayev says, “I can promise you, throughout my 22 years of this career, I have yet to see someone (who wasn’t a professional) [do] a good job.”