I Play the Dirty Grandma on Every TV Show

Bunny Levine didn’t begin acting until her 50s, but now she’s carved out her own corner of show business by playing just about every dirty old lady on TV and film

“You still alive?” Frank Gallagher asks his 90-something neighbor, Mrs. McCurdy, after he pulls her off life support.

Unsure, he leans in to see if she’s breathing. Suddenly, as he’s practically nose-to-nose with her, Mrs. McCurdy’s eyes bulge and Frank finds his balls clenched within her surprisingly strong grip. She won’t let go, even as he wails and tries to pull away.

For Frank, William H. Macy’s character on Showtime’s Shameless, pulling the plug on an old lady was just another morally-bereft, hair-brained idea to score some cash. As for Bunny Levine, the 92-year-old actress who played Mrs. McCurdy, grabbing the crotch of a famous actor was just another gig, not unlike getting a lap dance from Adam Sandler or being revealed as the last person Dave Chappelle had sex with on Chappelle’s Show.

Why? Well, Levine has some thoughts on that…

When did you first start acting?

I got married young, while I was in college, and I was having children soon after and taking all sorts of graduate classes. I became a teacher and then a librarian, so acting was out of the picture for almost 35 years. Then, when I was 55, I took early retirement — that was in 1985, that’s how old I am! — and I sneaked back into community theater and thought, I could do this.

I took a lot of courses and got a head shot and gradually got back into it. I’d lived all my life in New Jersey, so I started going for it in New York. I started by doing extra work and auditioning, then I did a commercial and then I started going for principal roles. Eventually, I got a manager in New York, and from 2000 to 2005, I was going back and forth between New Jersey and Los Angeles. Then in 2005, I moved out to California and got an agent, then I got a better agent. For every step of this, it was sort of like, “Can I take this next step?” And the answer was always, “I have to. I will.”

What do you consider your first big role?

My kids reminded me of this just recently — we do a Zoom meeting every two weeks. During it, they reminded me that the first thing I did on TV that was more than an extra was the Dr. Ruth show. Everyone on that show was an actor, and the way they did it was that one of the producers did an audition with you and gave you the basic premise of who you were and why you were talking to Dr. Ruth, then you did a callback with Dr. Ruth. But when you got to the actual taping, it was all improvised and she was so authentic feeling that you really thought you were that other person.

On the show, I played a widow who was having her first post-widow relationship and Dr. Ruth was giving her tips on how to be comfortable with that. My character — I remember her name was Louise — hadn’t done the deed yet, but she was getting advice on how to go about it. The funny thing was, this was in 1988 when my husband was still alive, and for a moment, some of those who knew me thought it was real and that my husband had died! They quickly found out it was fake though, when they called the house and he answered.

How did he feel about you pursuing acting?

My late husband — he died in 2003 — told me that he never saw me so happy as when I got back into acting. Especially after he died, it was something to keep me from being really depressed and lonely. And, of course, I was depressed and lonely, but I think it alleviated that.

Was Dr. Ruth where you began playing more risqué roles?

I guess so, though Chappelle’s Show was probably a bigger part of that. I mean, the joke there was that I was the last person that Dave had sex with, and I had some line about a pickle that was a double entendre. I guess it really started there.

Right after that, I did Everybody Loves Raymond. That was the first bigger thing I did in Los Angeles. In that, I was a friend of Raymond’s mother, and me and a couple of other older women kept dropping things to admire Ray Romano’s rear end. I never really thought that much about it, but I guess, in retrospect, after that I kept getting a lot of those roles.

What are some others?

General Hospital: Night Shift was one. That was a spinoff of General Hospital. I was a resident of a retirement community, and we had a big outbreak of sexually transmitted diseases. I kept having to talk about “my kitty” in that one.

I was also in Zohan in a tiny role that was kind of off-color, because Adam Sandler comes over and flirts with each of the old ladies, then he gets me up to dance and I stick a bill in his waistband. That whole film was sort of off-color.

On the DVD for that movie, Adam Sandler complimented me in the commentary, which was really nice of him. I did another thing with him on the Conan show where I gave him a ride on a little scooter. That’s my Facebook picture now. 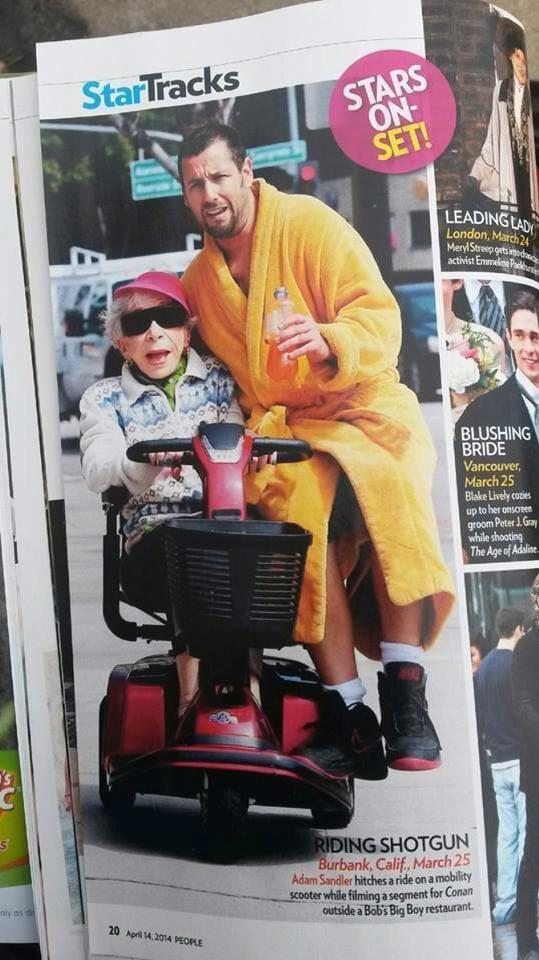 I’ve done a few others like that. In 2018 I did an independent movie called Holiday Hostage, where I played a very dirty grandmother. It was really funny.

Dave Chappelle was in a very grumpy mood that night, and he was smoking a lot. I think that was when he was getting disillusioned with the show, because he left shortly after that.

It wasn’t off-color, but I was in Cadillac Man with Robin Williams and he was so sweet. At the wrap party, he introduced himself to my husband. He was just such a sweet person. Also Alan Tudyk and Nathan Fillion were both very nice — very warm and open. Adam Sandler was also very nice. He gave all the little people on Zohan little souvenirs. I still have a mug he gave me and this thing you can set up on the beach. It’s a very California kind of gift.

I don’t know what it is [about getting these sorts of roles]. It’s just total coincidence. You certainly don’t get all the roles you audition for, but I tended to get these roles and I don’t know why. That’s not me in real life. In real life, I’m not a funny person, but at least three-quarters — probably more — of the roles I’ve gotten have been comedic. It’s strange.

Why do you think the trope of older people acting in an overtly sexual way is such a comedy staple?

It’s just so incongruous of everyone’s image of older people not having any sexual interest at all. I guess that’s what’s so humorous about it — the contrast. On a more serious note, this kind of role might speak to older people who don’t like that those assumptions are made about them. That being said, I don’t know if many older people are watching programs like Shameless, to be honest.

How does your family feel about these roles?

My children are a little embarrassed. My granddaughter, Robin, she’s a wonderful fan, but for Shameless, she just said, “Send me the clips.” She couldn’t watch that one.

Do your co-stars ever get embarrassed?

Finally, and, most importantly, how big are William H. Macy’s balls?

Ha! I wish that I could tell you, but they were hidden behind a cup.