I don’t believe myself to be a woman of good taste. At times, I’m almost aggressively anti-good taste — my favorite movie is Joe Dirt, and “Photograph” by Nickelback and “Girls Girls Girls” by Mötley Crüe were among my top five played songs on Spotify this year. Unquestionably then, a product as dumb as the Bud Light Seltzer Ugly Sweater Pack is designed for people like me.

The 12-pack of 5 percent ABV seltzers contains four festive flavors: Apple Crisp, Ginger Snap, Peppermint Pattie and the cleverly named Cranberry. All of those seem like perfectly reasonable booze flavors, with the glaring exception of Peppermint Pattie. It’s this horrific concept, however, that inspired my interest in the product in the first place: I couldn’t simply have the idea of Peppermint Pattie-flavored hard seltzer wedged in my brain without the sensory knowledge to accompany it. As much as I hated it, I needed to try it.

At 6:05 p.m. last Saturday, I began with Ginger Snap. I was shocked to find that the taste was more accurate to its name than it needed to be. Bud Light could have added some ginger flavor and left it at that, but perhaps that would have been disrespectful to some food scientist’s grandmother who made delightful ginger snap cookies each holiday season. The beverage contained an almost complex profile of flavors, with notes of allspice and molasses. It was ambitious, but it worked — it was actually quite delightful. 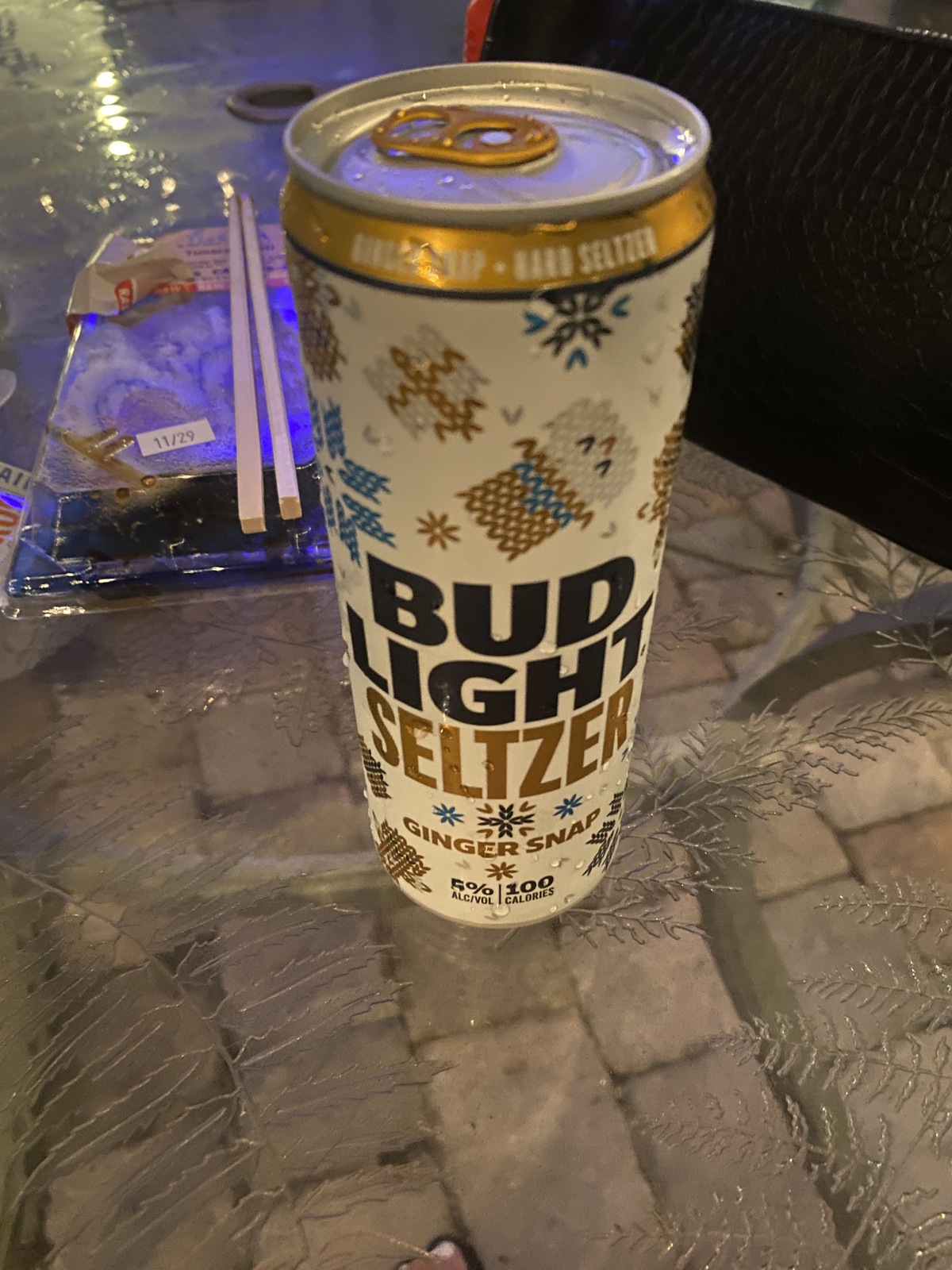 But then they got cocky. I have many theories about the development of this Ugly Sweater Pack, the marketing of which I detest. There’s no such thing as an ugly holiday sweater. It doesn’t count if ugliness is the creator’s intention! Just call it a holiday pack and go! Anyway, in my mind, Bud Light had the idea of creating a seasonal pack of seltzers, beginning primarily with the flavors of cranberry and ginger. Soon thereafter, however, some fucking suit in a board room, eager to impress his superiors, introduced the idea of a Peppermint Pattie flavored seltzer.

Oh to be a bee on the wall of this meeting. Upon hearing that first “p” consonant spit out of his mouth, I would launch from the wall and covertly buzz my way behind him, quickly stinging him in the neck before he could notice me. As bees do when they sting someone, I would die immediately after. But it would be worth it, knowing I did everything in my power to prevent Peppermint Pattie from existing.

It tasted, as my boyfriend described, like drinking a Vanilla Coke with your entire mouth burnt. All of the seltzers have just one gram of sugar, yet Peppermint Pattie managed to taste oddly sweet. Imagine if you mixed a few tablespoons of toothpaste into a plain seltzer, and added a dash of chocolate milk. The entire experience was threatening. I enjoy peppermint and alcohol with drinks like Schnapps-spiked hot chocolate, but something about the carbonation made it oddly medicinal and punishing. There’s a reason minty soda isn’t a thing! I chugged as much as I could, and continued my journey.

At that point, I was feeling a little roasty toasty. Apple Crisp seemed fine, in light of Peppermint Pattie. Like Ginger Snap, Apple Crisp tasted as though it were modeled after the actual dessert, and not simply the concept of apples. Quickly, though, Apple Crisp became as much of an enemy as Peppermint Pattie: I decided I would become a bee to sting whoever made this flavor, too. Unlike other apple-based alcohols like hard ciders, there was little tartness to the seltzer. Instead, it seemed to hone in on the sweetness of an apple alone, combined with the sugar one would be using if they were baking an apple crisp. Perhaps the issue is that there isn’t much sugar in the drink at all, making it more akin to baking an apple crisp with something like Splenda. Something about it was very uncanny valley, which like the Peppermint Pattie, made it feel menacing.

Fortunately, the remaining flavor was Cranberry, one I assume needs little explanation. It tastes like seltzer with a hint of cranberry. I very much enjoyed it. From that point, I mainly stuck with the safety of cranberry, basking in the cooling Florida night. In the distance, I could hear iguanas falling from trees into the canals that feed into the ocean. 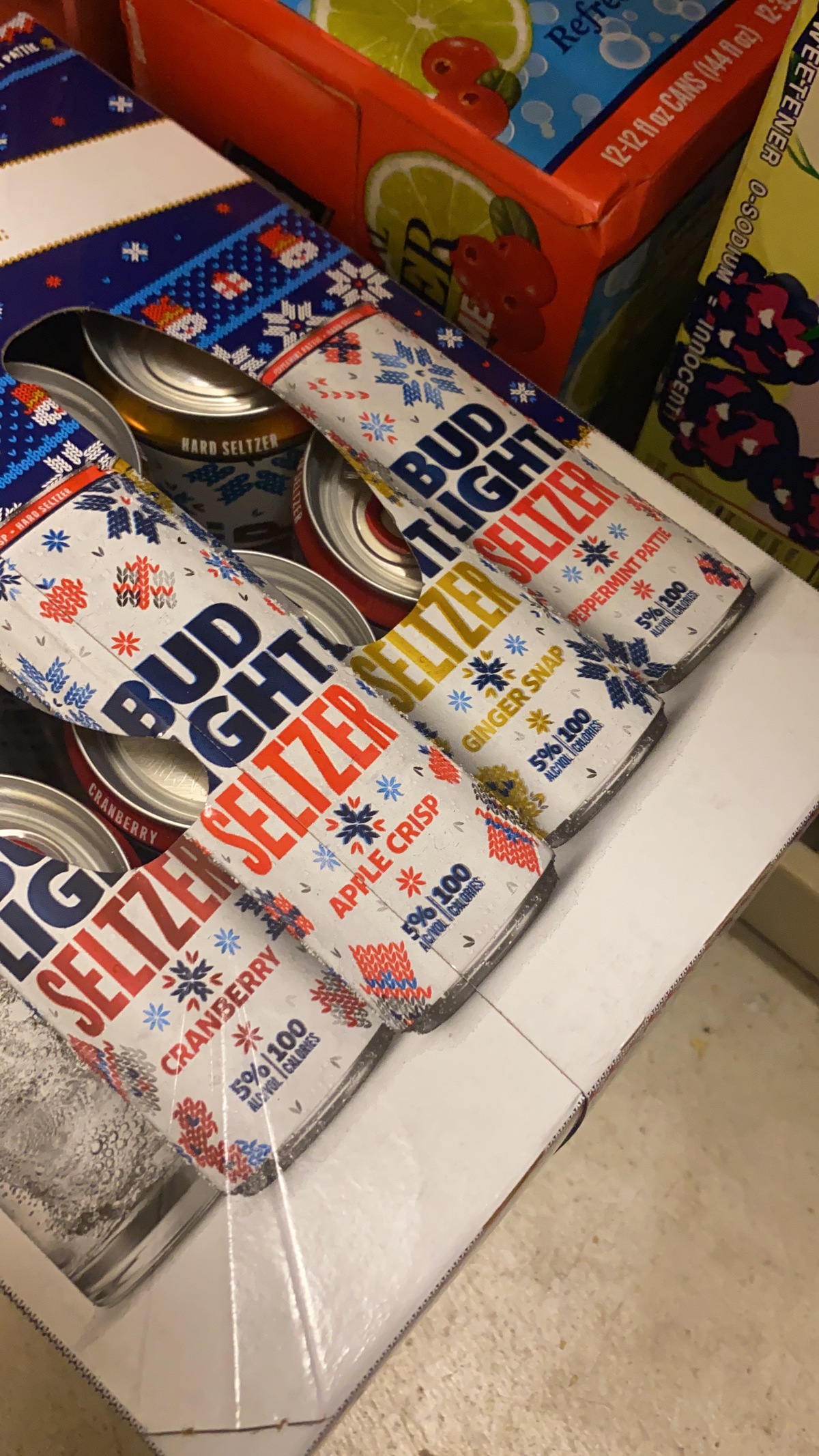 In the land more or less abutting the ocean, though, are dense forests of mangrove. Among the twisted roots and perpetual state of decay that feeds them lay thousands of sunscreen tubes, Pepsi bottles, faded buoys and blunt wrap packages, accumulated over years of hurricane assault. If you look closely, though, you might find treasure. Recently, my friend Max came upon the ultimate prize in a quest through the mangroves: a message in a bottle. On this Saturday night, a few seltzers deep, I got to read the message. The letter inside stated that the bottle had been cast off Key Biscayne in 2015, honoring the deceased mother of the letters’ writers in a family celebration of her life. Her name was Kathleen. With our remaining case of seltzer, we drank to her.

Would Kathleen have been a Bud Light Seltzer Ugly Sweat Pack appreciator? I will never know. But I like to think that the product itself was created with some fantasy of normalcy in mind, as though this could be a holiday season like any other where people get together to indulge in festive fun. Maybe Kathleen, with her big loving family, would have appreciated that. Either way, it was comforting to be reminded of these small ceremonies, the practices of celebration that are meant to mark the passing of time, even if, in this case, the ceremony involves drinking gimmicky booze.