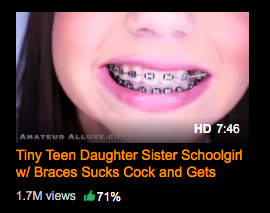 Obviously, the primary job of braces is to fix crooked teeth. But they also come with an added benefit — the appearance of youthfulness. “‘Once I had my hair in ponytails, with a baseball cap on, and got myself carded at the grocery store,’” a woman in her 20s who got braces told the Chicago Tribune back in 2003. Similarly, a Seventeen magazine essay about having braces in college tells the story of a 21-year-old who was told by mall security that she wasn’t allowed to be there after 5 p.m. without a parent.

For others in r/braceface, however, braces are a fetish for a completely different reason than their teen-like purity. “I’ve been absolutely fascinated with braces since I was about seven. I always wanted braces even though my teeth were fine. I finally figured out that I had all these crushes on girls with retainers and braces because it’s a fetish and I’ve embraced that,” says redditor bracesthrowaway. “I’ve had braces twice now and got a permanent retainer recently because I missed having some kind of metal in my mouth. My wife has had braces twice.”

Redditor AntiSocialBlogger adds, “For me, it’s like a form of bondage. Seeing a hot woman with all that metal in her mouth is a big turn-on. I’ve been into braces since I was a kid. I’ve had them, and my wife also had them. Having my wife with a mouth full of metal for two years was a fantasy come true. She still has retainers that she wears every night, and it’s still a turn-on for me.”