The Swole Trolls Behind ‘Bodybuilders Against Tipping’

Bodybuilding forums birthed the original online trolls, and this anti-server group is just their latest concoction

Buried in the desolate depths of Facebook, where the odd Boomer hurls a Molotov cocktail of fake news, there exists a peculiar community called “Bodybuilders Against Tipping.” Their mission seems simple enough upon first glance: “As bodybuilders, we are uniting and letting it be known that tipping should be abolished.”

Data suggests that tipping encourages racism, sexism, harassment and exploitation — therefore, academics, too, argue that paying servers a livable wage is a better alternative for everyone.

The thing is, the arguments made by “Bodybuilders Against Tipping” are much less progressive. They — or rather, their alleged leader, Said Shavershian, known online as Chestbrah — argue that service work requires “zero skill.” They assert that all servers are addicts, and therefore, tipping fuels the drug epidemic. They insist that, with the recent shutdowns, “the world is getting by just fine without food slaves. This can all be automated for pennies and save small businesses thousands long-term: Robot bartenders that bring you a drink right away, not constantly looking down at their phones to see if the dealer hit them back.”

This logic is preposterous, of course, as is pretty much everything else featured on the page. They also argue against wearing masks, falsely claiming, “The virus is only killing off obese people who never lifted weights or worked out a day in their lives.” If you scroll through their posts from 2016, they urge their followers to vote for “our God Emperor Trump” on numerous occasions. One reads, “I’d rather commit seppuku before I tip or vote for a mega-cuck like Bernie Sanders.”

Confused about everything I was reading, especially what any of this has to do with bodybuilding, I emailed Shavershian, who explains that he has no connection with the group, and that whoever runs the page is simply using his image. “I mean, I guess it’s funny,” he tells me. “I have a pretty broad sense of humor and find a lot of humor in dark comedy. Obviously, I don’t agree with what’s been posted, but I’d be lying if I told you I don’t find it funny as fuck. I’m a businessman first and foremost, probably even before a bodybuilder, so having multiple pages of me everywhere, on many forms of social media, is a win for me. When a lot of these fake pages post these sorts of things, I get a lot of followers, who I end up converting with the real ‘Said’ and what I’m all about, which in turn simply drives more traffic and business to my multiple online businesses.”

For more insight, I asked my bodybuilder colleague Oliver Lee Bateman what he makes of “Bodybuilders Against Tipping,” and if this anti-tipping mindset actually exists within real bodybuilding communities. “This is certainly a very strange page,” he says. “The powerlifting and bodybuilding communities as they exist in the real world are often very friendly spaces, especially now, when a lot of the people engaged in the activity will help promising novices ‘learn the ropes’ as everyone works to develop a more functional or aesthetically pleasing — by sport standards — body.”

Bateman does mention, however, that Shavershian is representative of the “aesthetic” bodybuilding community, which gained internet popularity in the late 2000s and became largely associated with shameless narcissism. Interestingly, Chestbrah is brothers with the late Aziz Shavershian, known online as Zyzz, an aesthetic bodybuilder who earned meme status as a sort of Chad figure, promoting being “aesthetic” by making gains through lifting and having a low body fat percentage.

The basic story of Zyzz is that he went from being a skinny computer nerd to a jacked bodybuilder, which brought him fame on online fitness boards as well as places like 4chan, where incels saw him as an inspiration — they viewed getting buff like Zyzz as a means of getting back at all the people who had wronged them and their once-thin frames. He was also known as a master internet troll, and again, he often played the part of a macho Chad, belittling others, especially women, and relying on his chiseled physique as a source of power. Needless to say, he was a contentious figure, looked up to by some and looked down upon by others. 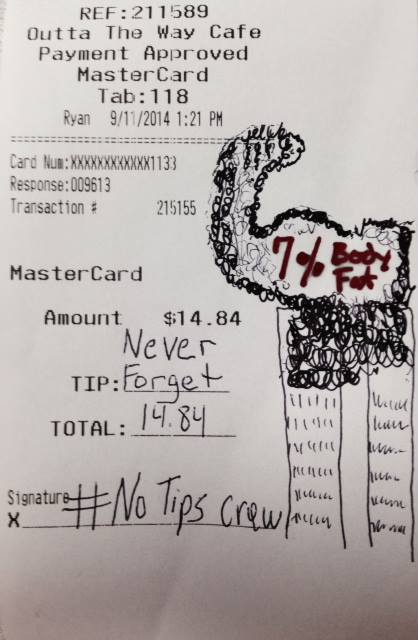 You can see, though, how Zyzz, Chestbrah and other “aesthetic” bodybuilders have come to represent the manosphere, or at least internet trolling — whether they like it or not — and why pages like “Bodybuilders Against Tipping” would use their images to troll the masses with toxic opinions. “Many of the ‘internet bodybuilders’ and forum denizens aren’t so much representative of the bodybuilding or powerlifting communities — I’ve encountered weird people at these events or in these gyms, but never internet-caliber trolling or meanness — as they are of internet discourse writ large,” Bateman says.

In that regard, “Bodybuilders Against Tipping” is just one small blemish on a much larger troll.

Just wait until you hear about “Christian Bodybuilders Against Women.”