Escaping the Stigma of Seeking Mental Health as a Black Man

I grew up being told that only ‘crazy’ people sought out therapists. They were only a ‘white person thing.’ Then I fell apart — and one saved my life

I knew something was wrong. I’d known for quite some time. Physically I was fit, but my mind was in a lot of pain. I was trapped in a fog that wasn’t letting up. Motivation, drive and happiness were fleeting. I’d felt disappointment and sadness before — that was nothing new — but my mood had turned dark and I was living in a 24/7 state of melancholy. I was depressed and had to get to the bottom of why.

But that meant doing something black men my age and older almost never do: getting a therapist.

Mental health is a taboo subject in the black community. Many look at it as something that scientists and doctors invented to make money. People who have mental problems are viewed as broken, weak and not strong enough. Growing up, my family members would tell stories about “crazy relatives” or that one boy who has “something wrong with him.” Moreover, mental illness was viewed as a white people problem. “Going to see a shrink? That’s something white folks do,” I’d hear as a kid. “They got the money for that kinda shit. We can’t afford to lay on no couch and tell somebody why we sad or why my dad didn’t play with me enough.”

In fairness, black people have historically been victims of the medical industry. From the Tuskegee experiments, in which many African-American men were duped into being injected with syphilis when they thought they were receiving free health care; to James Marion Sims, dubbed the “Father of Gynecology,” who performed brutal experiments on enslaved black women; to today’s substandard medical care given to black people, we’ve never received adequate health treatment. So I can understand why as a group, black people — and black men specifically — would be hesitant to see a therapist.

Not to mention, black men are expected to be John Henry, the legendary steel-driving hero with extraordinary strength. We are to be strong, assured and confident. We are conditioned to show little emotion, which definitely means no crying or weakness of any kind.

This was magnified even more for me growing up in the ghetto of Kansas City, Missouri. If you were sad, you took a drink, smoked something or merely shook it off — no matter the violence that dominated your daily life or created that sadness. “We in the hood. We don’t go to therapy. We just take it for what it was,” explains U-God in the documentary series Of Mics and Men, which chronicles the legendary rap group the Wu-Tang Clan.

That was definitely my experience. We never discussed the trauma — from fights, from shootings, from drug abuse, from police terrorism — we endured. If someone even mentioned that they felt bad about what was going on around us, a friend would always say something like, “Snap out of that shit, nigga, it ain’t that serious. Get laid, grab a drink, hit the gym.” Mental health was always looked at as something that could be cured with activity. It was a feeling, a mood that would eventually go away.

It didn’t for me, though. At 30, I was employed as a technical support engineer and had become incredibly stressed out. Not the usual “this job is killing me” feeling that a majority of people feel at one time or another; it was more “I’m slowly going down a hole that I may not get out of.” It felt like everything — not just my job, but my life — was crumbling beneath me.

It was familiar, too. When I was in eighth grade, I flunked out of a prestigious public school. I was missing classes and not applying myself. My laziness resulted in me not making the minimum GPA necessary to maintain my position at the school. The embarrassment and feeling of failure was earth-shattering. I was supposed to be smart, the kid who could do it all. I felt dejected, alone and suicidal. Only by immersing myself back in school and receiving positive reinforcement from my mom and the rest of my family did I find a way to climb out of that hole.

But this time, the positive affirmation wasn’t helping. I needed to see a professional. My mother, however, rebuffed the idea. “Go to church and pray on it. See your pastor,” she told me. Her response wasn’t that surprising. During slavery, the church was a place of refuge for African Americans. And in the Civil Rights era, black people used churches to organize and build alliances. But while I certainly believe in the power of prayer, I also knew that I needed to see a licensed therapist, not merely a pastor.

That therapist, who I’ll call Dr. Jeff, was super-laid-back and chill. (He was wearing a Superman shirt and shorts at my first appointment.) I talked with him every week for nearly two months. We discussed many different things, but mostly my fear of failure, not living up to my promise and how I handled pressure. At the center of it all was figuring out my place in the world. Who was I? Where was I supposed to be? Who was I supposed to be? Who did I want to be? Almost all roads, too, led back to me failing out of that prestigious high school and the shame and sadness I still felt about it.

After I finished my sessions with Dr. Jeff, I spoke with my friend Robert about what I’d experienced. In confidence, he shared that he was battling some issues himself — namely, the stress of being both a provider and a black man. He asked me point-blank, “What did you get out of seeing a psychiatrist?” I told him, “Just imagine someone is there specifically just for you. To listen to you. To not judge you. To help you. Someone who is unbiased. A person whose job it is to guide you through figuring out your problems.”

“You ever feel embarrassed to be seeing someone?” Robert responded.

“Not anymore,” I shot back. “Look, I was stuck. Drinking, fucking around and getting high wasn’t clearing my mind. The doctor helped me see that those coping mechanisms were only suppressing things. He made me realize that all the pressure I was feeling was because of the unrealistic expectations I placed on myself. To be real with you, going to see Dr. Jeff was one of the best things I’ve ever done. If people want to judge me for it, fuck ’em.”

“There’s a fear of the white mental health psychiatrist or psychotherapist analyzing us and messing with our minds, in some kind of negative way,” explains psychotherapist Jewel Love, co-founder of Black Executive Men, a service that helps “black men in corporate America find inner peace.” “There’s also a stigma about it being for crazy people. What is not often lumped in there is personal development, career advancement and self-improvement.”

At what cost, I ask Love. “Loneliness. A sense of social isolation. Even if we have friends around, it’s a feeling of not being truly connected or understood,” he responds. “Not being able to be who we truly are because we’re always on the defensive. Depression, difficulty sleeping, irritability, emotional imbalances, mental distortions, anger and suicidal ideation.”

It’s hard, too, not to tie all of this back to the gravity of our existence. We’re the most incarcerated and under-employed racial, ethnic or gender group. We also have the lowest life expectancy and are targeted by police at the highest rates. To say nothing of how our mere existence invokes feelings of rage and fear. As a result, we’re constantly walking a line between not being threatening and preserving a sense of our manhood.

I, for one, refuse to continue to push that myth. I tell all my friends about the benefits of seeing a mental health professional. Nor am I shy about admitting that I still go. While some of them are hesitant and don’t see the need to talk to a therapist about their problems, a couple will inevitably pull me aside or call me later and ask about the experience. And that, at least, is the start of a long overdue conversation. 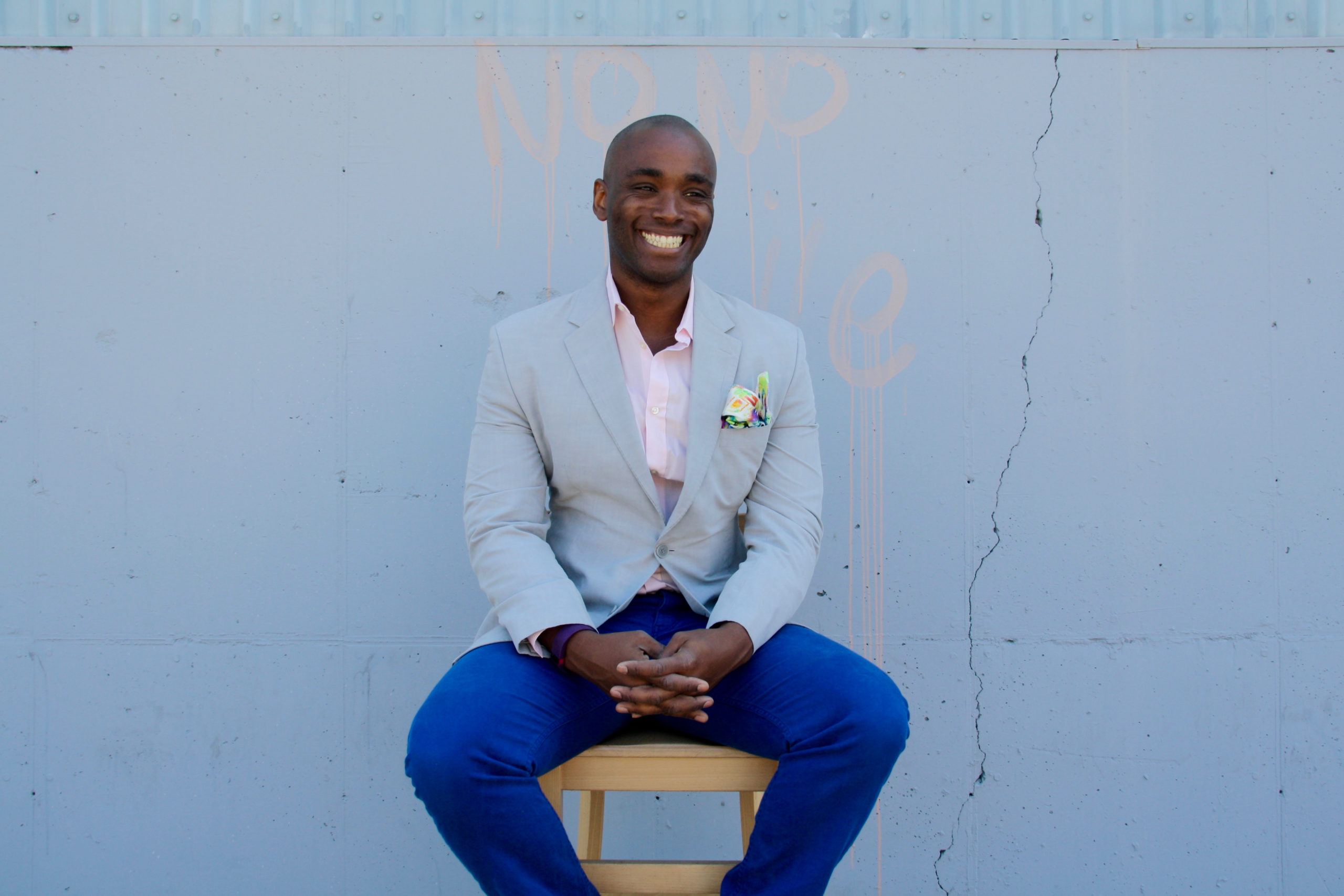 LeRon L. Barton is a writer from Kansas City, Mo that currently resides in San Francisco, Ca. He has been writing poetry, screenplays, and short stories since he was way young. LeRon’s essays have appeared in Salon, The Good Men Project, Eastbay Express, Those People, AlterNet, SF Bay view, Buzzfeed, Gorilla Convict, and Elephant Journal. His first book, “Straight Dope: A 360 degree look into American drug culture” was released in Feb 2013. LeRon’s new book, “All We Really Need Is Love” is available on Amazon.com.