‘I Had the Name First!’: The Other Bill DeBlasio Is Tired of Receiving Your Hate Mail

For Bill DeBlasio, a normal dad on Long Island, it’s an endless hell sharing a name with the loathed mayor of New York City

Several months ago, as New York was engulfed in protests against police brutality, Bill DeBlasio received a message on Facebook from a man in Switzerland named André. André’s message was short and sweet: “stupid, alarmingly incompetent racist fuckface,” he wrote. Then, before DeBlasio had a chance to respond, André sent another message: “wrong bill deblasio… sorry…”

For DeBlasio — who is a 54-year-old cybersecurity professional, and definitely not Bill de Blasio, the mayor of New York City — it was just another Tuesday. He’s used to the abuse. At least André had the decency to apologize.

For seven years now, DeBlasio’s life has been tormented, and occasionally improved, by the existence of a famous (and widely loathed) politician who happens to share his name. DeBlasio routinely receives hate mail and expletive-laden messages intended for the mayor. “I literally have thousands of emails over the years,” he tells me. “Some are funny. Ninety-five percent of them are just people that hate Bill de Blasio, and they tell me what a piece of shit I am — how I’m letting them down and the cops hate me and ‘I hope you die.’ A lot of them are vicious, racial attacks on me! They drop the N-word left and right.”

Facebook is chaos, too. “People send me messages,” DeBlasio says. “Once, as a joke, I changed my profile picture to Bill de Blasio’s picture. Oh my God, I got 600 friend requests in like two weeks.” DeBlasio is also constantly tagged in other people’s posts about the mayor. “I like torturing and confusing the people back,” he admits. “I’ll just say the most ridiculous, outrageous things.”

The madness first started around 2000. That’s when DeBlasio first learned of a rising politician with his name, who was working as Hillary Clinton’s Senate campaign manager. (One small difference: Mayor Bill de Blasio has a space between “de” and “Blasio,” while this Bill DeBlasio spells it as one word.) He subscribed to the other de Blasio’s newsletter. But soon he started getting messages that weren’t meant for him.

“In the early days of the internet, I used to get Christmas cards from judges,” DeBlasio says. “I’d get invited to all these thousand-dollar-a-plate fundraisers.” Pretty soon, the weirdness escalated. “I actually had a stalker. I had a woman who kept writing to me — she wanted to help out with Hillary’s campaign, and why wasn’t I returning her messages? Finally I had to be like, ‘Look, you got the wrong guy.’”

As far as he knew, DeBlasio had no relation to this political doppelgänger. But the coincidence was heightened by the fact that he comes from a whole family of Bill DeBlasios. His 80-year-old father is Bill DeBlasio Sr. His son, 25, is also named William DeBlasio; his college fraternity nickname was “Mayor.” Not to mention, all three generations of DeBlasios live on Long Island, less than 40 miles from Gracie Mansion. 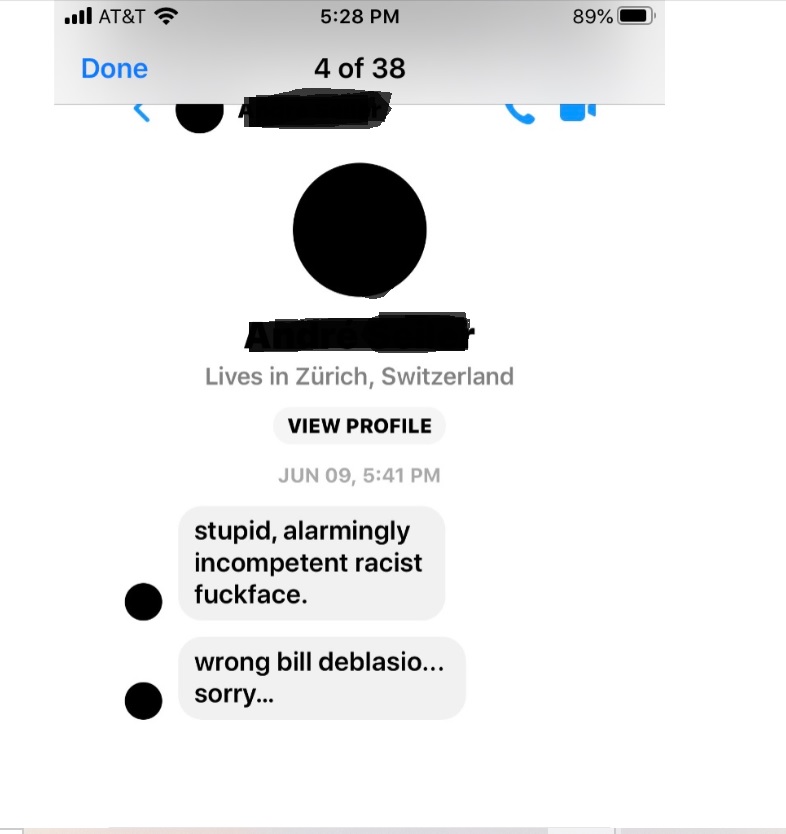 The Perks of Being a DeBlasio

In 2013, when the other de Blasio mounted a successful campaign for mayor of New York City, DeBlasio realized his name carried some perks. That summer, he attended the MLB All-Star Game at Citi Field with his father. Parking was a challenge. “They had the whole middle parking lot blocked off,” DeBlasio says. “The police were routing everybody to the tennis center.”

DeBlasio knew his father couldn’t make the walk in the heat, so he pulled a U-turn into the main lot. Police stopped him. DeBlasio calmly explained that he was going into the middle lot to meet some of his cop buddies. “They said, ‘Is your name on the list?’” DeBlasio recalls. “I said, ‘I dunno.’ They said, ‘What’s your name?’ I said ‘Bill DeBlasio.’ They said, ‘From the Comptroller’s Office?’ I said, ‘Sure!’ And he goes, ‘All right, go in.’ And the other cop says, ‘Hold on a sec, let me see some ID!’ So I pulled out my driver’s license, showed him it says Bill DeBlasio and the cop says, ‘All right, go in!’”

After the inauguration, DeBlasio noticed that cops hated the new mayor, who had campaigned on a (still unfulfilled) promise of police reform. More than once, he says, police have pulled him over for speeding, glanced at his license, and asked if he’s related to the mayor. “I say, ‘Nope.’ And they say, ‘Good, have a nice day,’ and I take off.”

There are other perks, too. Both DeBlasio and his father, Bill DeBlasio Sr., say they’ve easily gotten reservations at popular restaurants. “They’d say, ‘Oh, are you from the Mayor’s Office?’” the younger Bill says. “And my wife would say, ‘I really don’t feel comfortable answering that question.’ And we’d get reservations anywhere we want to go. Then you walk in and you see the disappointment on their faces — it’s just a normal guy.”

‘Fuck Off, Michael, I Have a City to Run’

Sharing a name with an obscenely famous politician can get stressful fast. In 2016, a North Carolina man named Donald R. Trump told Vice that he needed to have numerous fraud protection services following attempts to hack his bank accounts. The prior year, a 34-year-old man named Jeb Bush told me that his name posed a problem when he applied for jobs at progressive nonprofits: “People are like, ‘Do we want to hire a Bush? This is a liberal organization.’”

In Bill DeBlasio’s case, he’s become accustomed to receiving the mayor’s hate mail on a regular basis. In an average week, he says he receives anywhere from two to 20 emails intended for the mayor. (I won’t share DeBlasio’s email address publicly — but suffice to say, it’s the kind of email address that randos might email by mistake while trying to reach the mayor.)

“I get emails,” DeBlasio says. “Ninety-five percent of them are hate. Probably 5 percent of them, people have actual issues — they need help, or they’re looking for a job — and to those people I usually reply right back and say, ‘I’m so sorry, you got the wrong guy.’ But people are just obnoxious idiots when they hide behind a keyboard. I have one guy that I’ve been trading emails with back and forth for the past few months. He thinks I’m the mayor, and every time de Blasio’s in the news, he sends me the clippings and says, ‘You really screwed up today.’” 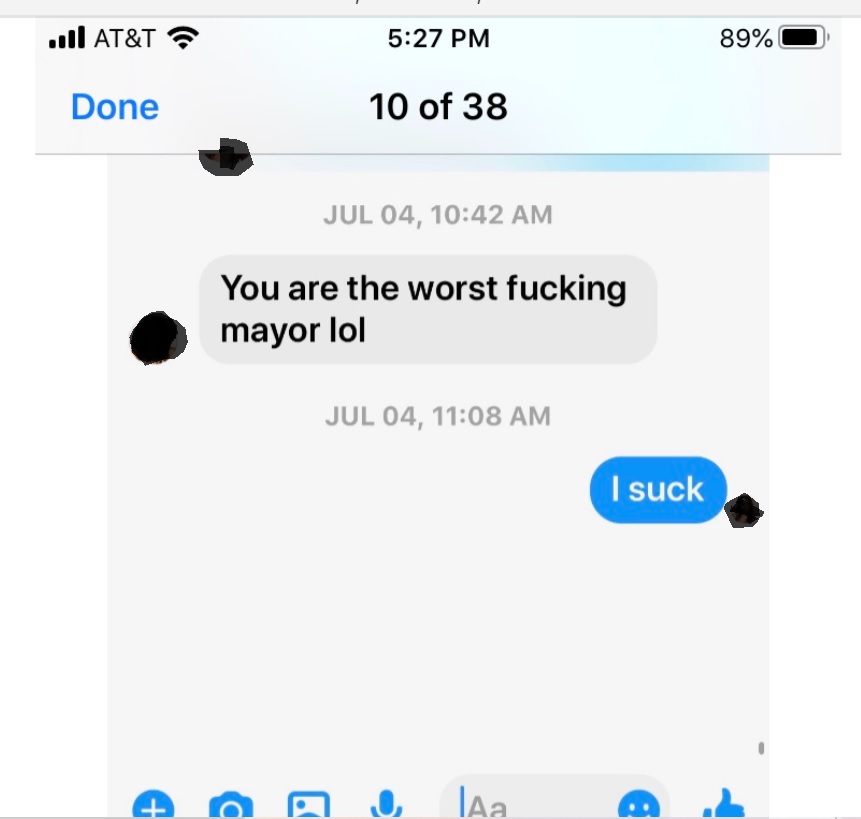 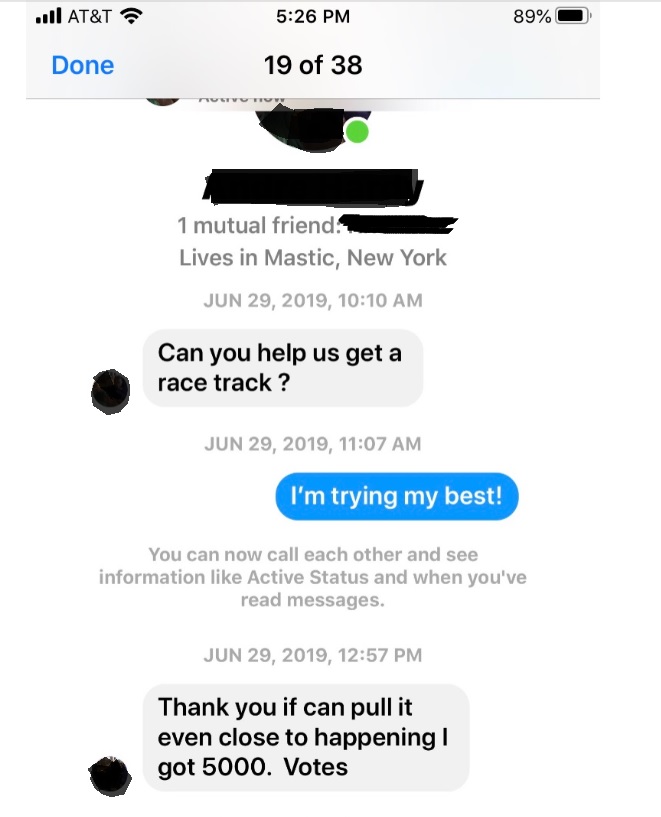 Out of some mixture of boredom and frustration, DeBlasio often plays along and responds pretending to be the mayor. “Sometimes I send nice emails, like: ‘Hey, I’m doing the best I can. Maybe you can give me some advice; what should I do?’” he tells me. “Other times I say, ‘You’re really starting to annoy me. I don’t have time to answer these emails.’”

At times, DeBlasio’s inbox is like a barometer of unhappy reactions to whatever de Blasio happens to be doing (or not doing). In 2019, for instance, he received messages mocking the mayor’s pointless and protracted presidential campaign. This past July, he received a lengthy Facebook message from a man accusing Mayor de Blasio of abandoning the NYPD. “Fuck off, Michael, I have a city to run. I don’t have time for this shit,” DeBlasio wrote back. The man, apparently believing he was corresponding on Facebook with the real mayor, replied, “I understand that you don’t have it easy,” and then continued ranting. (By contrast, DeBlasio’s father, Bill DeBlasio Sr., says he rarely uses Facebook and doesn’t get messages like this.) 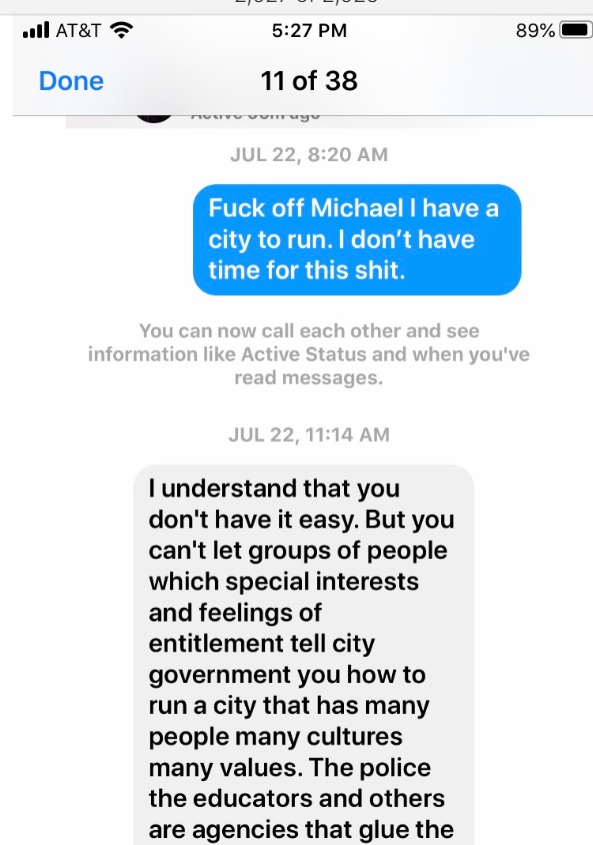 ‘Everybody Goes Out of Their Way to Shit on That Guy’

When I ask if he’s considered going by a different name to avoid confusion, DeBlasio is firm. “I had the name first,” he says. “I’m not changing it!” (Technically, he’s right: Although the mayor is a few years older, he was born Warren Wilhelm Jr., and changed his name as an adult.)

Politically, Bill DeBlasio has little in common with the mayor of New York City. He says de Blasio is “a little too liberal for me,” and describes himself as “more of a libertarian. I don’t like the right-wing people, I don’t like the left-wing people. I think they’re all assholes.” But being intimately acquainted with the volume and intensity of hate that de Blasio receives, he can’t help but feel for the guy a little. “The word is that de Blasio’s an asshole and people just blindingly hate him. I don’t know that he’s really done anything bad for the police department, but they hate him.”

During the roiling summer protests of 2020, the mayor’s popularity among progressives tanked as he strenuously defended and excused police brutality against peaceful protesters. By June, even the mayor’s former and current staffers were distancing themselves from de Blasio and denouncing his handling of the protests in a withering open letter. Around then, the other DeBlasio noticed a significant rise in hate mail coming his way. “For a while, it really spiked up,” he tells me in August. Some weeks, he was being swarmed with 15 or 20 messages. “Republicans and Democrats,” he says. “Everybody goes out of their way to shit on that guy.”

The Meeting of the Bills

In 2016, DeBlasio had a chance to find out. He was attending a Mets playoff game when he spotted Mayor de Blasio making the rounds in his section, shaking hands and glad-handing people. “So my buddy goes up to his security guys and says, ‘Hey, do you want to meet the real Bill DeBlasio?’ And they thought it was hysterical,” DeBlasio recalls.

The similarly named men met at last and posed for a picture. In the photo, both Bills are grinning in Mets jerseys, and a physical resemblance is eerily apparent. The less famous DeBlasio is holding up his license to prove that they share a name. 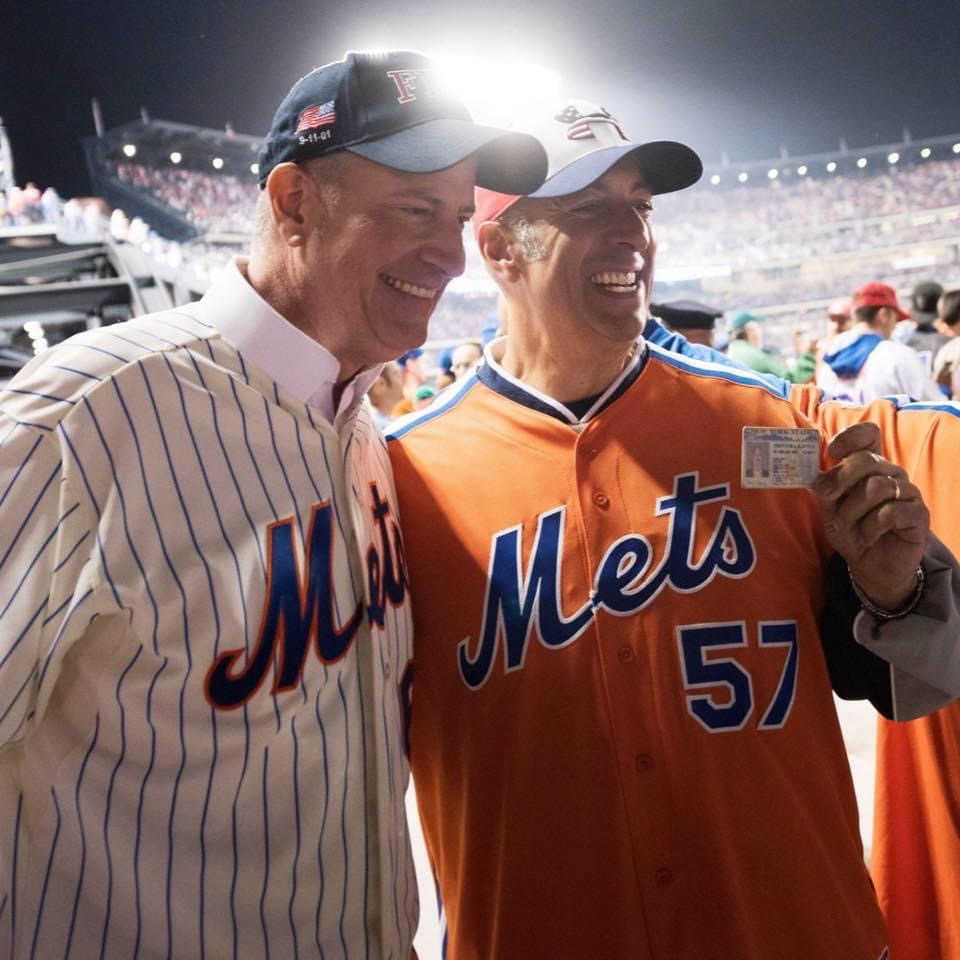 At the end of the inning, as many spectators headed to the bathrooms, DeBlasio had several minutes to stand and chit-chat with his famous doppelgänger. “[The mayor] said, ‘So how’s it having the same name as me?’” DeBlasio tells me. “I said, ‘Dude, you’re fucking killing me!’ And he goes, ‘I’m so sorry.’”