The Eternal Struggle of the Large-Headed Man

I was born big: 9 lbs., 4 oz., 22 inches long. One of my uncles, seeing me the following day, is said to have wisecracked, “That’s not an infant — that’s a toddler.” No doubt this impression was enhanced by my enormous bald head, which took my body some years to catch up with. Even in adulthood, though, my cranium has long struck me as a bit oversized. If I borrow your sunglasses, I’m bound to bend the frames outward. I’ve had to seek out larger bike helmets. And I’d almost certainly turn around if you called me “big head,” because my girlfriend, Maddie, is in the habit of doing exactly that.

When I read about Alex Chu, a star lacrosse goalie who may be stuck on the bench for part of his freshman college season because his head is too large for any of the sport’s standard helmets, I found the situation all too relatable. But then the specifics of the story (Chu’s head is more than 25 inches around, and in high school he played with headgear made of two helmets split and fused together) got me wondering if we were even in the same league, skull-wise.

I asked Maddie to take my head circumference, and it turned out to be only 23 inches, for a hat measurement of 7 3/8, technically “large” yet right in the middle of the normal sizing range. What’s more, I found that the Craft Yarn Council (if you can’t trust them when it comes to this data, then nobody’s worth asking) gives a standard male adult circumference range of 22″–24″, making my head altogether average. The wildest finding, though, was that Maddie’s measurement is just a quarter-inch shy of mine. AND SHE CALLS ME BIG HEAD.

These were disorienting revelations. I’d carried myself as a big-headed person for years, convinced that everyone noted this in my appearance. I’ve even had the conscious thought, I’m tired of holding up my absurdly heavy, boulder-like head. And here I was learning it was mostly… well, in my head.

I’m forced to conclude that related factors, like the substantial tract of forehead that complements my receding hairline, and the approximately 9-inch distance from chin to said hairline, have played a part in my self-consciousness. Could it be that other people afflicted by head-size anxiety are exaggerating the problem?

My editor and I asked for some input on Twitter.

What jumped out right away were the prevalence of “big head” complaints over “small head” ones — I guess we’re most concerned by taking up space or not fitting in — and the tendency to view one’s head negatively despite, say, an absence of outside commentary on its dimensions.

Take the softball helmet example: Men’s Health deputy editor of content Jordyn Taylor was stressed by her need for the single helmet that fit her, though her teammates’ apparent indifference to this struggle indicates they didn’t pay much attention to her head one way or the other. My editor, Cooper Fleishman, fretted that the 6-foot-3 friends at his wedding would “dwarf” his “pinhead” dome in photographs — yet his head circumference is a perfectly respectable 22 and a quarter inches. Still, he says, “the little-head thing is my kryptonite. I remember comically oversized ball caps and batter’s helmets falling over my face in Little League — and I still have to snap those hats super-tight, like a kid.”

Apart from the issues with headwear, both camps seem to live in fear of having their larger-or-smaller-than-ideal noggin “discovered” and mocked, though that manner of ridicule — unlike many forms of body-shaming — is rather limited outside the playground.

In fact, calling out someone’s gigantic or tiny head is a sport usually reserved for family members and significant others. Twitter users accused siblings and grandparents of doing this; MEL colleague Eddie Kim, who estimates his circumference at 24 or 24.5 inches, confides that his “Korean relatives always said I had a big head.” But no one is more likely to bring this up than a romantic partner.

Steven, age 28, says he has to wear “6 7/8 fitted ball caps or youth sizes,” for which his partner roasts him. “I’ve found it’s best to stick to more loosely constructed adjustable caps or women’s/youth sizes.”

And Chrissy Teigen, ever ready to roast her husband, John Legend, tagged him into the Twitter conversation on bigheadedness without an ounce of mercy:

Legend is an interesting case study, because while looking at photos of him doesn’t give you much of a clue as to whether his head is bigger or smaller than average, it’s “obvious” to Teigen that it’s the former, and Legend himself has absorbed this notion. The bigness of Legend’s head is then less of a known fact, more of a household legend.

Teigen has also addressed the helmet worn by her son Miles (great kid, great name) that is slowly correcting his “adorable slightly misshapen head,” joking that it’s “too late” to salvage her own head. So maybe — stay with me here — no one’s head is perfect, meaning any head insult is a path to mutually assured cranial destruction? I’d buy that.

All told, the head-size issue remains a private burden (so long as your cool celebrity wife isn’t blowing you up on social media). As small-headed Steven says, “It’s pretty easy to go through life with nobody noticing, but I’ll always know.”

Maybe that’s why only those closest to us think to bring it up, typically as a term of endearment. Urban Dictionary has declared “bighead” a teasing pet name, while the phrase “hey, big head” is associated with flirtatious banter. I, for one, am going to start taking it way less literally now that I know I’m not the walking bobblehead I imagined myself to be. Shockingly, I found some good advice on this topic at the Bodybuilding.com forums — typically a place where toxic masculinity thrives — in a thread where someone described his physique as too big for his head. “I have a huge head man if that helps,” replied one commenter. “like size 8 hat. Relax about ur image man if people dont like you fukc them.” Another told him: “Just feel good about yourself and you’ll be fine.”

In other words, get out of your head — it’s a surefire way to get ahead in life. 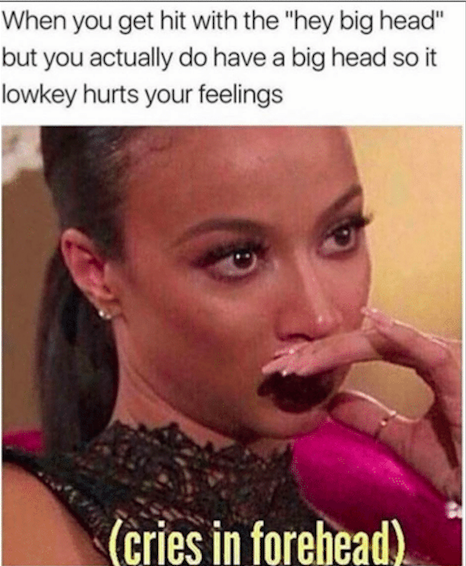