Beto fans, please do not try to make our calves cramp

But — taking the tweet literally — what about the whole cramping thing?

Oh, honey, no. Sorry, but I’ve thought about this way too much, and now we must discuss it.

Is this how cramps (and orgasm) actually work? Can one actually make a woman nut so epically that her calves cramp, or is that just the dehydration talkin’? More importantly, is that what the women want? Is that what we crave? Is a calf-cramping jolt to the pelvis really an aspirational female orgasm — is this a metric men should be aiming for?

Let’s learn a bit about physiology and sex, shall we?

First of all, here’s the full tweet in question: 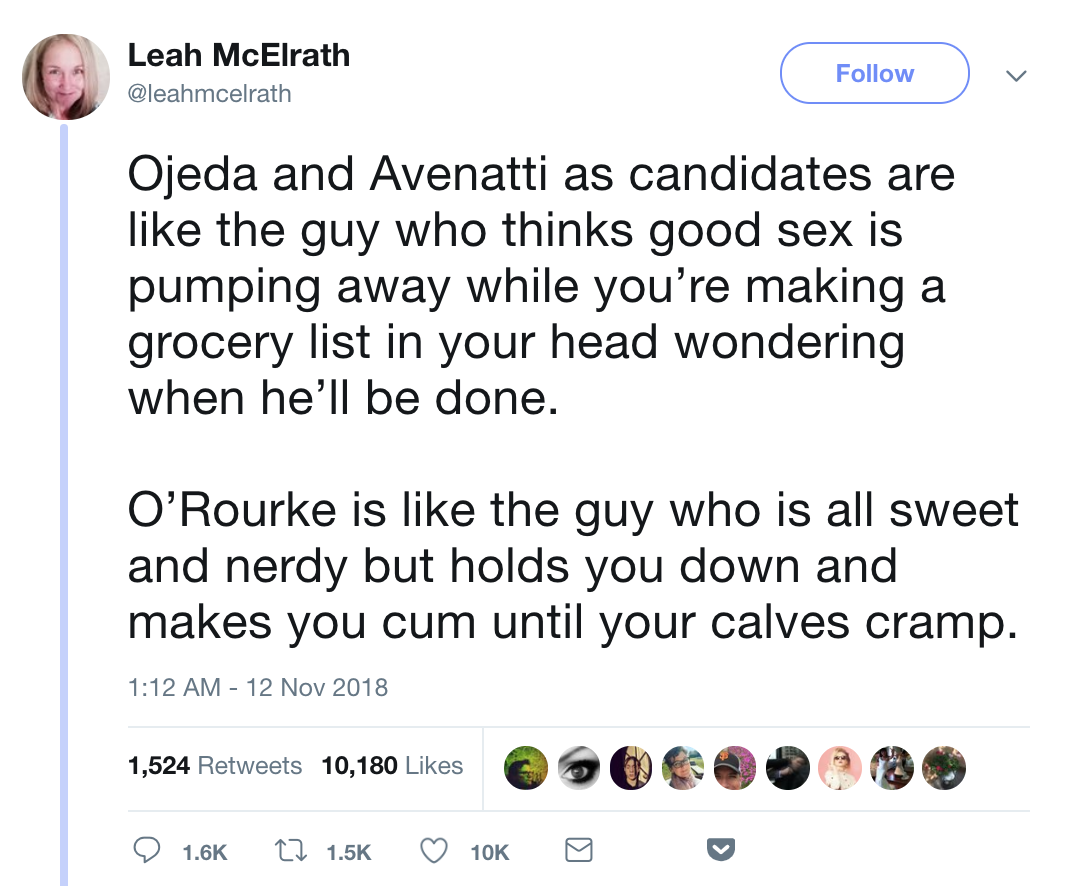 First, I asked some friends. Did they “get” this tweet, and does this really happen? Have calf cramps now, or ever been, an association you’ve made with orgasming or great sex?

I was told the following by three women in a group chat:

Assuming it’s a deep-dick scenario and you’re flat on your back, too? Sure, you could theoretically take a pounding for so long that, I guess, if your legs are up and wrapped around your man, clenched on for dear life, you’d get some cramps up in there. But that also doesn’t sound amazing. Fast, hard, pounding sex is great, but not for an extended time.

I could imagine squatting on top and having your legs shake from lifting up and down for so long, too. This also isn’t what comes to mind when I picture epic release, mainly because I’m doing too much work!

There’s some scientific explanation for any muscle cramps during sex. Some women get abdominal cramps after they orgasm. They feel like menstrual cramps and can be caused by semen-induced uterine contractions. There are other possibilities: too much pressure on the cervix, or irritation in the bladder or ovaries.

Some women get cramps in other non-sex-organ parts, like their legs. That can be due to dehydration and muscle fatigue, hella sweating, or other nutritional imbalances. (This also happens to men, for the same reasons.)

In general, during sex, we tense up during the arousal phase, Planned Parenthood explains. But “this tension is usually released when partners have orgasms.” However:

If partners are aroused for a long time, or if they’re holding their bodies in one position for a while — which often happens during intercourse and oral sex — they may find that their muscles begin to feel sore. This is normal, and it usually goes away in a day or two.

As for the leg cramps, their repeated occurrence is telling me that you hold a lot of tension in your thighs, calves, and feet when you’re building up to or having orgasms. Perhaps if you relax those parts of your body during sex, your orgasms, and your leg cramps will both decrease. Your legs seem to be working hard to help you come, so perhaps they need to stand down and the climaxes may follow suit.

On another message board, a woman writes that she gets leg cramps right around the time of the Big O: “While I’m on the edge of or having an orgasm, I occasionally get rather painful leg cramps. When this happens, I try to adjust the leg in question, but it’s rather distracting at a moment when I’d rather not be distracted.”

She wants to know if it happens to anyone else, and while other women admit that they too get them, it’s nearly always a result of how they need their legs to be in order to get off. “I can only orgasm when I am on my back, legs outstretched, pushing down on my heels down into the bed,” a response reads.

But here’s where it gets interesting: Calling a great orgasm or great sex toe-curling is standard in the literature. Your toes curl because of increased activity in the cerebellum, which amps up muscle tension. Some people theorize that we consider high heels sexy precisely because they require the foot to recreate the same position it takes when women orgasm. Others argue that women are better able to get off when their feet are pointed, or when they stretch out their muscles.

All of this, of course, could be logically connected. Outstretched legs, and curled toes or feet can easily lead to calf cramps. And while many women agree that cramps would be worth the price of admission to get laid and get off right, it doesn’t appear to be necessary. The delirium and shivers that can come from really great orgasms are all we’re really looking for.